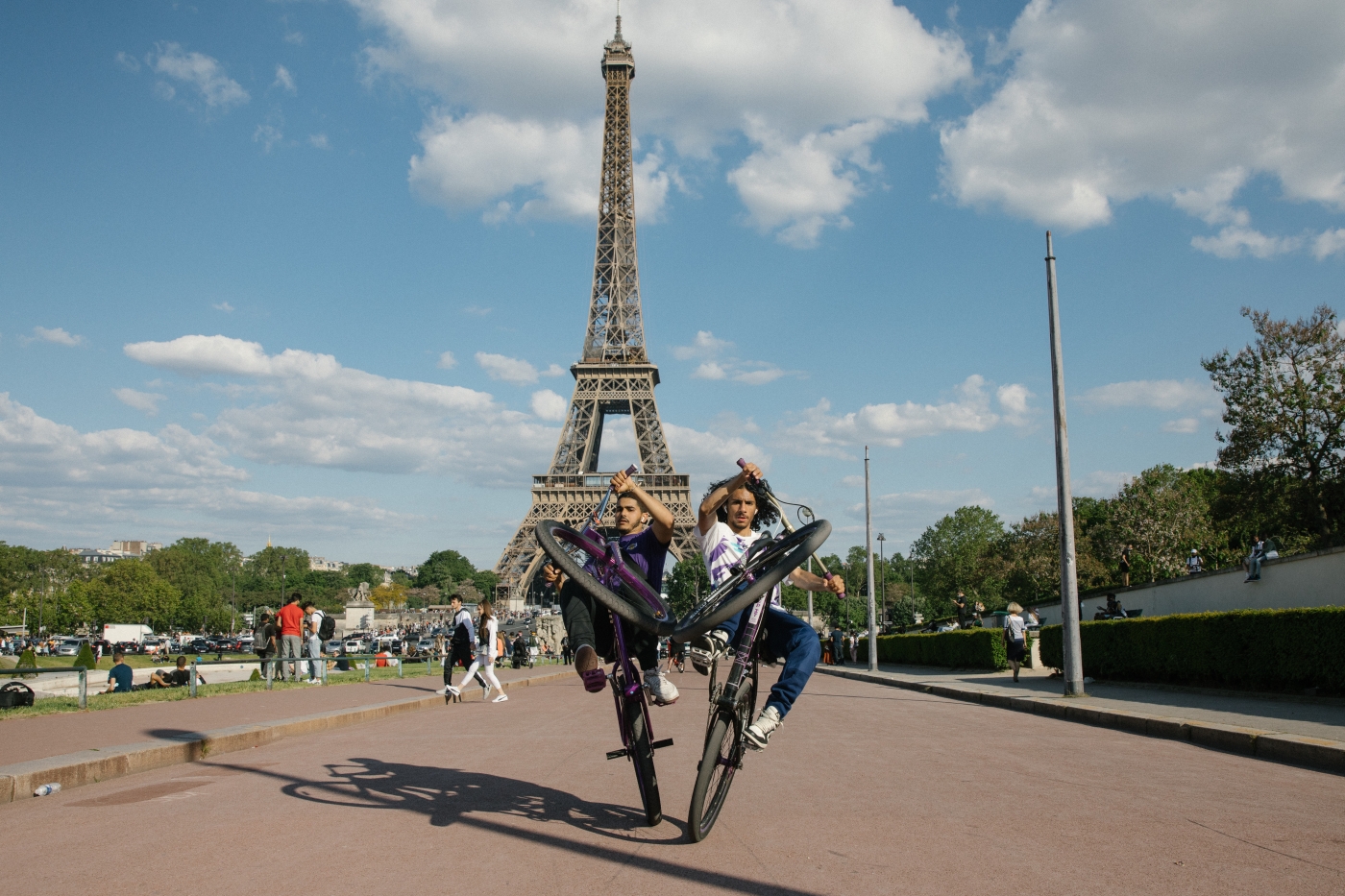 Thrills on wheels: How 'bike life' is taking off in Paris

Parisian teens are chasing fun and pulling tricks in fearless stunt-bike collectives – even the police are 'cool' with it
Céline Martelet
, Laurence Geai

It might have originated in the grittier neighbourhoods of Baltimore and Philadelphia, where bikers performed daredevil stunts on motorbikes, but when the "bike life" movement reached London nearly a decade ago, and then Paris more recently, young people started using bicycles instead.

In 2019, Ismael Ben Chaib, 16, a high-school student from Brétigny-sur-Orge in the southern suburbs of Paris, was one of the first to take it up.  “Bike life is my life,” says Chaib, who's been practising tricks for the past couple of years and is now considered one of the best at his art in France.

Every day, the minute school is out, he jumps on his bike and practises wheelies and tricks. No hands, no feet, at full speed, sometimes standing on his bike seat, he repeats the stunts over and over again until they are perfect, then posts his feats on Instagram. (All photos by Laurence Geai)

Brétigny-sur-Orge is home to one of the largest bike life collectives in the Paris suburbs. Every weekend, around 20 teens gather in the town's streets and parks, and they make up a tightknit group. “For us, bike life isn’t an individual sport. We’re actually more of a collective,” another bike life pioneer, Anas El Hamdaoui, tells MEE.  “We’re always together, we ride to have fun. It’s the only thing I’m really passionate about. I tried football and swimming, but they weren’t my thing.”

For Ben Chaib, bike life is a family affair. The courtyard opposite his family's apartment block in Brétigny-sur-Orge has turned into a makeshift bike repair shop. His father, Mustafa – also a bike enthusiast – oversees operations, cheerfully adjusting the riders’ chains, brakes and seats.

Ben Chaib senior knows all the kids by name, and he calls their parents to tell them if they will be home late. “I’m there to provide a framework, to bring them into line when they get all worked up for nothing. 'Stay focused on the bikes' is what I always tell them,” he says.

The Ben Chaibs spend a lot of time together these days, since bike life has brought them closer. “The last years of primary school were hard for Ismael," says Mustafa. "Before starting middle school, he was really struggling. He wasn’t happy, and I didn’t know what to do," he says.

"Riding was a lifeline for him. It opened him up to the world. If it hadn’t been for bike life, Ismael might have run away or gotten into trouble. Just talking about it upsets me, even today.”

But not all parents in Brétigny-sur-Orge are interested in the bike life culture: “My father doesn’t understand that it’s really a passion," Hamdaoui says. "I asked him to come see me perform, to look at my videos. He’s never there, and he’s never seen any of my videos.”

At weekends, the kids head for Paris. They load their bikes onto the train and an hour later they’re at the foot of the Eiffel Tower – one of their favourite stomping grounds. Before bike life, Ben Chaib and Hamdaoui rarely spent a day in the French capital, but now they know the streets of Paris like the back of their hands.

All afternoon, despite the heat, the teens from the suburbs ride through Paris at breakneck speed, performing one trick after another. In bike life lingo: the “swerve”, “step”, and “crisscross”. Bike life gatherings like these are called rideouts, or “baraudes”, from the old French verb “barauder”, which means “to wander”.

Weaving through cars, rarely taking cycle routes, the teens navigate the dense traffic of Paris without helmets or protective gear. “If you don’t control your bike in Paris, you’re dead,” says Hamdaoui. “We do run a lot of red lights, but we try to look before passing. We train for hours before pulling tricks like that in Paris. The problem is that these days, lots of kids want to follow us without any training.”

Passers-by in some of the most upscale areas move aside to let the teenagers perform stunts on the pavements. “I know we’re a little intimidating. But the drivers are mostly worried about their bodywork,” Ben Chaib says, laughing. Hamdaoui agrees: “Even my parents think we’re a bunch of savages! But bike life is a state of mind, a way of life. We’re always considerate of other people, and we apologise if we come in a little too close.”

The friends have had their share of spills. Their hands, knees and elbows are covered in scrapes and scratches, but so far they haven't had any serious accidents.

Police in Paris have, to date, shown a certain leniency when it comes to the city’s newest bike riders, even though bike life gatherings have been banned in some French cities, like Quimper in Brittany. Ben Chaib and his friends are often called into line, but they have never been penalised. “Sometimes the police stop us, but they’re cool. They know who we are,” he says.

This article is available in French