Fantastic Middle Eastern beasts and where to find them

Tales of supernatural creatures roaming the Earth have long captivated the imagination, Middle East Eye introduces you to some of the region's most famous 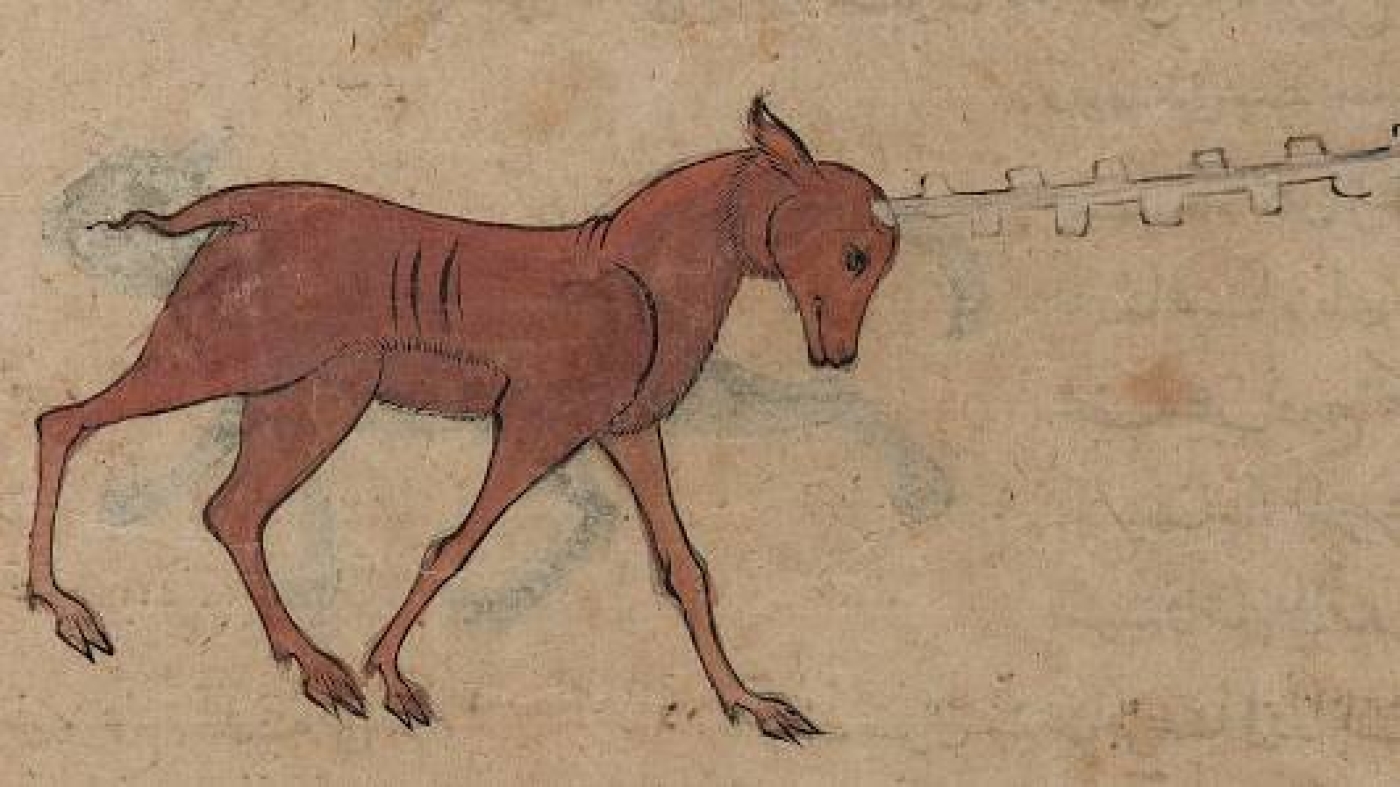 According to ancient Middle Eastern legend, giant horned rabbits once hopped across an Earth that was itself balanced on the back of a giant whale. All this while a huge serpent lay dormant at the Earth's core, patiently waiting for the apocalypse so that it could swallow the world in its entirety.

The source of such colourful descriptions of supernatural beasts is subject to debate among scholars; some speculate they may have been the way our ancestors explained the discovery of dinosaur fossils or other prehistoric beasts.

After all, reality has its fair share of unusual looking animals, such as the dugong, which resembles something between a dolphin and a seal. and resides in the waters of the Red and Arabian seas.

For others, these beasts are symbolic creations intended as such, and are meant to represent human qualities in the animal form.

Whatever the case, there is no shortage of descriptions. The fifth century BCE Greek historian, Herodotus, claims to have visited a place near Alexandria in Egypt, where he found the remains of giant winged serpents, “in such quantities as it would be impossible to describe”.

Such discoveries inspired myths that endure to the modern day, many imbued with religious parables and magical plot devices.

While the three Abrahamic religions generally frown on the idea that such beasts actually existed, their traditions contain their own descriptions of legendary animals that play a crucial role in Biblical and Quranic narratives.

Here Middle East Eye takes a closer look at some of the creatures that appear in the region’s myths, religious texts and stories.

A fiery serpent rests in the depths of hell, lying in wait to swallow the heavens, the Earth and hell itself, holding off doing so out of fear of God. Falak, which means “daybreak” in Arabic, is bigger and arguably more gruesome than the Basilisk of medieval Europe legend made famous by the Harry Potter novels.

Created at the beginning of time, Falak only reveals itself at the end of the world in order to devour sinners.

A possible inspiration for the legend is the very real magma python, which lives in parts of Africa and is known for its burning ember-like skin. The similarities are more than physical, as the snake is able to bury itself underground, only rising to catch its prey, smothering the unfortunate victim with its body, before devouring it.

Serpents appear in belief systems globally, most famously as Adam and Eve’s tempter in the Bible. Falak could therefore be the Arabian version of the giant snake found in other traditions.

Norse mythology features a similar creature known as Jormungand,  a child of the god of mischief, Loki. Its scaly body encircles the planet, as it grasps the end of its own tail in its mouth, as in the ouroboros image of the serpent devouring its own tail.

Similar to Falak, it waits to initiate the end of the world, known as Ragnarok.​

On top of a giant whale is a bull carrying a precious stone on its back. Standing upon the bull is an angel holding out the six hells, the Earth and the seven heavens. Below this balancing act is Falak, the serpent from the previous entry.

The whale was known as Bahamut in pre-Islamic mythology, although the name Balhut was also used.

The 12th-century Arab geographer, Ibn al-Wardi, describes this layered propping up of the world in his work Kharidat al-Ajaib wa Faridat al-Gharaib or The Pearl of Wonders and the Uniqueness of Strange Things.

Other accounts suggest its head resembles that of a hippopotamus or an elephant, while some argue it is actually a winged sea serpent with fangs. The bull on its back is known as Kuyta, and is said to have as many as 4,000 eyes.

According to the 13th century Persian cosmographer Zakariya al-Qazwini, the angel stands below the whale like a pillar, holding all else above it.

The characters of this pre-Islamic myth may have evolved from the Biblical story of a giant land beast called Behemoth and Leviathan, a sea-dwelling monster. The Arabian Bahamut could be a combination of the two.

Ancient Mesopotamian myths may also have influenced the belief, as ideas often filtered south into the Arabian peninsula from the region that is now Iraq.

While the Quran makes no mention of the myth, medieval writers included the accounts in their writings.

Jorge Luis Borges, a 20th-century Argentinian writer, described Bahamut in his Book of Imaginary Beings, as being so immense that humans were not able to bear its sight, writing: "All the seas of the world, placed in one of the fish's nostrils, would be like a mustard seed laid in the desert."

A dragon-like creature bearing the name Bahamut features in the Dungeons and Dragons series.

The 13th century Venetian explorer, Marco Polo, described the rukh or roc as a giant bird that was so huge it could carry an elephant in its claws. He claimed the bird lived in Madagascar, which at the time was home to a now extinct nine-foot tall elephant bird.

Ibn Battuta, the 14th century Moroccan explorer, also claimed to have seen one of these magnificent birds, usually white in colour and with a wing span of 48 feet, describing it as a "flying mountain" over the seas of China.

The legendary mariner Sinbad came across the rukh several times, with the bird carrying the sailor to the safety of its mountain nest after a shipwreck. There he witnesses rukh eggs that are "148 times" bigger that hen eggs.

The adventurer escapes the lair by tying his turban to the rukh’s leg, flying so high that he loses sight of Earth.

There are similar creatures to the rukh in other cultural mythologies, including the Egyptian phoenix, and it is possible that the rukh was an Arabian variant of that creature.

Another magnificent bird, mentioned in the writings of al-Qazwini is the Anqa, its name meaning the one with a long neck. It was said to be like a giant eagle, living in the Mountains of Qaf, a mystical chain of mountains believed to connect the earth to the cosmos.

Possibly a variation of Bahamut, this large sea creature appears in the One Thousand and One Nights tales of Abdullah the Fisherman and Abdullah the Merman.

The fish has the ability to swallow an entire ship in one gulp and is sometimes compared to the megalodon giant shark that lived tens of millions of years ago.

The Arabian Nights describes it as the: "biggest of all fishes and the fiercest of our foes. His bulk is greater than that of any beast of the land, and were he to meet a camel or an elephant, he would swallow it at a single mouthful."

Oil from its liver is supposed to be miraculous and if someone covers their body with an ointment made from the Dandan's liver, they are able to breathe underwater.

Both Abdullahs from the tales discover this power, allowing them to survive in the seas.

Popular in Persian folklore, the Shadhavar, also known as Sadhuzag or Aras, is thought to have originated in what is now Iraq.

Resembling a gazelle, it has a single hollowed horn with 42 hollows (72 in some legends), which create an enchanting flute like melody.

The tune causes anyone who hears it to stop and listen, but if the wind blows in the opposite direction, the previously melodic music turns into a haunting hum that causes melancholy.

In some stories, the mythical animal is six feet tall but gaunt; its face is marked with dark patches, making it look as if tears drip from its eyes.

The 14th-century Egyptian zoologist, Kamal al-Din Muhammad ibn Musa al-Damiri, claimed the Shadhavar was a carnivore, but others suggest he had mistaken the animal for the Siranis, a carnivorous beast that looked similar, also played music and was supposedly found in Afghanistan.

A shape-shifting giant hyena, the werehyena can either be a hyena that turns into a human or vice versa.

The beast is nocturnal, and enjoys biting necks and drinking blood, much like vampires. Legends from Ancient Greece, Arabia and Persia mention these mythical monsters killing victims by drinking their blood.

Popular in African folklore, in its human form, the werehyena prefers to adopt practical professions, such as blacksmithing, woodcutting or healing.

Not in need of a full moon to transform, werehyenas in parts of Sudan, Tanzania and Morocco are able to hypnotise their victims with their eyes, sending them into a trance-like state.

A giant yellow rabbit with a foot-long black spiralled unicorn horn. This is not a description of a character from Alice in Wonderland, although it would not be out of place in a Lewis Carroll story.

Some tales place the hybrid creature on a mythical island in the middle of the Indian Ocean called Jazira al-Tennyn or Dragon Island.

According to one legend, when the Macedonian king, Alexander the Great, defeated the ferocious island dragon by feeding it bulls filled with poison, the islanders were so grateful to have their lives saved, they presented the giant horned rabbit as a gift to Alexander.

Al-Qazwini describes al-Miraj in his works; it is carnivorous, using its horn to impale its much larger victims before eating them. The only way to get rid of al-Miraj is through the spell of a trusted witch. Heritage
Jinn: Who are the supernatural beings of Arabian and Islamic tradition? 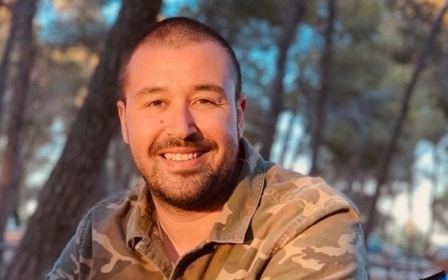