Echoes of al-Andalus: The Portuguese town celebrating its forgotten Islamic past

Home to the only surviving medieval mosque in Portugal, Mertola doesn't hide a past shaped by Muslims, Christians and Jews alike 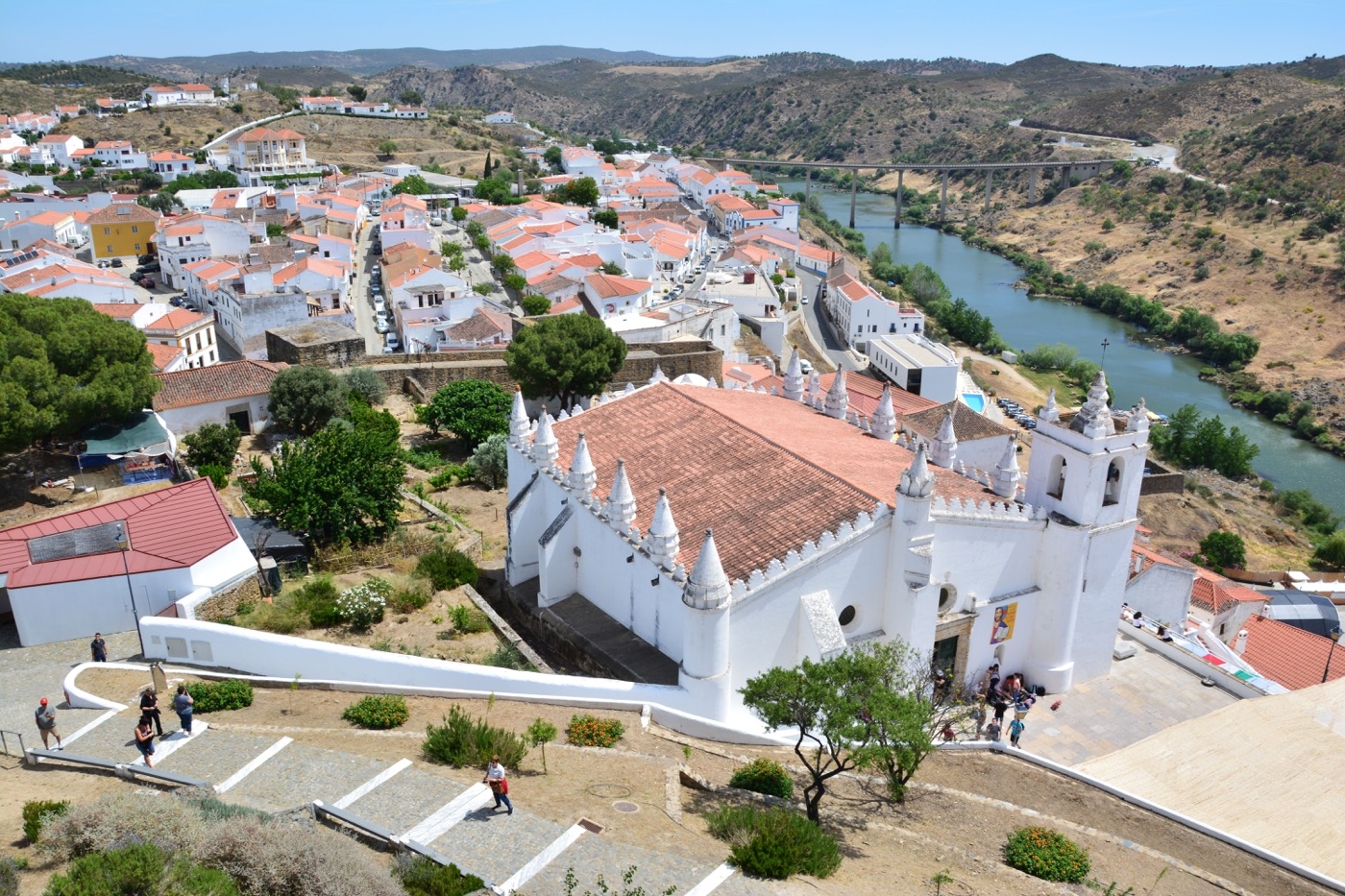 An imposing building with cylindrical towers stands out on the steep hill of Mertola, a southern Portuguese town on the banks of the Guadiana river, not far from the Spanish border.

Is it a church with a mihrab? Or a mosque with a cross?

The whitewashed building with horseshoe arches is known as the church of Nossa Senhora da Anunciacao. Those who come to visit its vaulted interior are told it’s the best preserved medieval mosque in Portugal.

“It’s a mixture of many things,” says Germano Vaz, who is from Mertola and lives nearby. “It was built on top of a Roman temple. It was a mosque and now it’s a church. We are very proud of this assemblage of religions and cultures.”

Inside the church that used to be a mosque, Christians still pray facing Mecca. The mihrab, a semi-circular niche in the wall, is directly behind the main altar.

A bell tower stands where, less than a thousand years ago, a minaret would call Muslims to prayer.

From the 8th to the 13th century, much of what is now Portugal and Spain was under Muslim control. Known as al-Andalus, the region became a hub for cultural exchange, where science, architecture and art thrived.

As long as they acknowledged Muslim rule, Christians and Jews were, for the most part, protected and tolerated. The three religious groups coexisted relatively peacefully in southern Portugal, known as Gharb al-Andalus.

Portugal is still replete with traces of its Islamic past, from architecture to the influences of Arabic in the Portuguese language and music.

Living together is possible

In mid May, the sound of the Islamic call to worship could be heard again on the streets of Mertola. It didn’t come from the tower that replaced the medieval minaret, but from loudspeakers placed around town for the 10th Islamic Festival of Mertola.

“With this festival, we want to show that there are still a lot of similarities between people across the Mediterranean,” says Manuel Marques, the head of Mertola’s Culture and Heritage office.

“With intolerance and extremism rising all over the world, we want to show that it is possible to live together. Mertola was a great example of coexistence, a lot of different people lived here.”

Muslims arrived here in the 8th century and governed the region for around 500 years. The old town’s monuments still retain Islamic features.

Jews, money and antisemitism: How the hate myth was born
Read More »

“Mertola celebrates its Islamic heritage with pride. We want to show respect for Islam and for our common heritage. This town has always been a place where different cultures meet, connecting southern Portugal with the rest of the Mediterranean,” says Marques.

The festival has been celebrating Portugal’s Islamic heritage with music, arts and crafts, workshops and exhibitions since 2001.

“We wanted to explore the similarities between Portugal and the north of Africa,” says Jorge Revez, who was involved in the organisation of the festival’s first edition. Currently the president of ADPM, a local development association, Revez worked with Moroccan associations to preserve the cultural heritage of al-Andalus.

In the medieval period, Mertola’s port and mineral riches made it an important regional centre. After a period of decline, the town was revitalised by the discovery of Islamic artefacts in the 1970s. Mertola now claims to hold Portugal’s most significant Islamic art collection.

On Friday night, a diverse crowd gathered by the river to listen to the UK-based Palestinian band 47Soul. Singing in Arabic and English, the band mixes traditional Levantine music with synth hooks and electronic beats to create music they refer to as "shamstep".

Musicians with roots in Algeria, Tunisia and Niger brought different people together, dancing the night away. The sounds of the traditional oud, but also electric guitars and synths, filled the narrow banks of the Guadiana valley.

In 1496, King Manuel I of Portugal issued an edict expelling all Jews and Muslims from his kingdom. The coexistence and cooperation of al-Andalus seemed to be at an end.

Today, Muslims make up less than 0.5% of a population of nearly 11 million. For centuries, Portugal’s Islamic heritage was largely forgotten.

“During the dictatorship, the traces of Islamic history were erased,” says anthropologist Maria Cardeira da Silva, a professor at NOVA University Lisbon who is interested in Arabic and Islamic contexts.

The Christian nationalist dictatorship that ruled Portugal from 1933 to 1974 depicted Muslims, known as Moors, as the enemy. After the end of the dictatorship, a new interest in Portugal’s Andalus period helped re-evaluate the country’s Islamic past.

“The archaeological work done in Mertola challenged the idea that the Muslim was the 'other'. It showed us that our history is made of different layers that are interconnected. And that the Islamic layer is part of us, it’s included in our identity,” says Cardeira da Silva.

The pioneering work of archaeologist Claudio Torres helped debunk the myths of the Arab Muslim invader historically depicted as the enemy.

The research led by Torres at the Archaeological Field of Mertola emphasised continuity across the Mediterranean. Torres suggested that, contrary to widely held belief, Islam arrived gradually in Portugal through trade, and was not imposed in the battles documented by historians.

“Archaeology helps us focus on the continuities, on the contact and interaction between people on both shores of the Mediterranean,” says archaeologist Virgilio Lopes, who has been working in Mertola for the past 30 years.

Archaeologists in Mertola believe that Islam spread across the south of Portugal through its ports and that it expanded rapidly because of conversions and not as a result of violent conquest.

The theory that Islam came through trade and conversions, and the archaeological work that focused on continuities across the Mediterranean helped question the dominant nationalist historiography that depicted Muslims as the “other”. “Archaeology shows us that the other is closer to us than we thought,” says Lopes. “We have a common past and a lot of cultural similarities. We are closer to northern Africa than we are to northern Europe,” he argues.

Despite never having studied archaeology, Leila Ali, a visitor to the Mertola festival, agrees. Originally from Egypt, Ali has been living in Portugal for twelve years.

“I lived in Germany before moving to Portugal, but I didn’t like it. It was cold, and people were cold. In Portugal, people are like Arabs. They are warm and friendly,” she adds with a smile.

Ali has been coming to the festival since 2011, but she tells MEE that this year’s festival, held between 16 and 19 May, was more difficult because it coincided with Ramadan.

“It’s hard to reconcile the programme with fasting,” says Ali.

Hussein Beddar is another regular visitor, having been coming to Mertola for 15 years. Originally from Algeria, he has been living in Madrid for 35 years. Despite being tired from fasting and the heat, he spent the day serving tea to guests and selling Arabic sweets in the market.

“I don’t mind serving tea while I’m fasting,” says Beddar, describing at length what he plans to eat when the sun sets. “Mertola is special and I love being here,” he adds.

But many regret that local Muslim communities were not more involved in planning the festival. Others fear that despite good intentions, the Islamic festival in Portugal might perpetuate Orientalist fantasies and reproduce cliches about Islam.

“There is the danger of the festival becoming a 'folklorisation', which is also a way of creating distance,” warns Cardeira da Silva. “The aim should be contradicting the problem of othering. Mertola should show that the other is also part of us.”