According to a 2011 Palestinian Central Bureau of Statistics study there are 80,000 drug users in the occupied territories 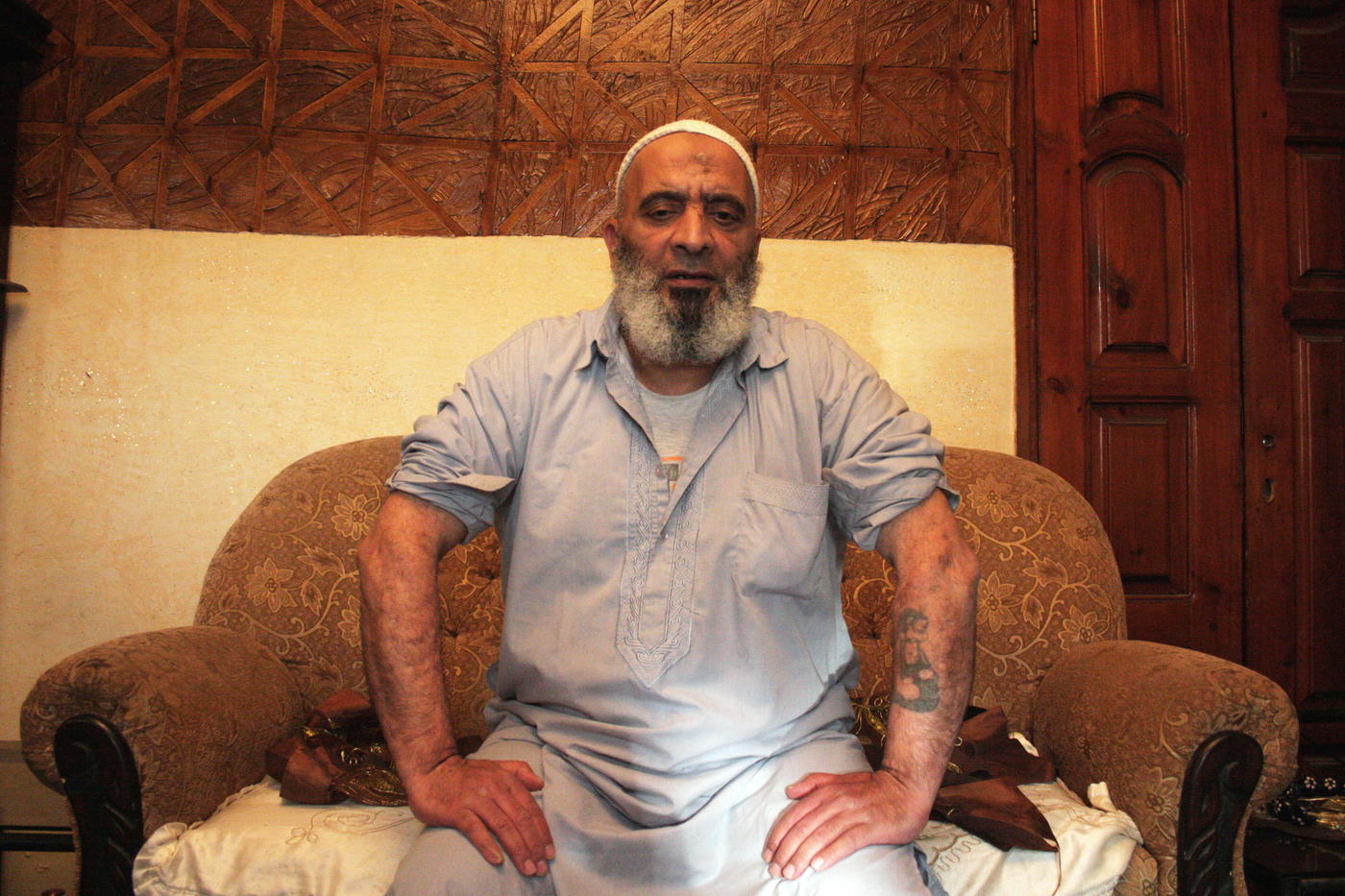 Daoud, a former drug dealer, in Al-Eizariya, a town located less than 3km from Jerusalem, cut off from it by the separation wall (MEE/Ylenia Gostoli)
By
Ylenia Gostoli

EAST JERUSALEM - Zaki had been clean for a week. Nervously rubbing his hands together, his bony elbows on the table, the 24-year-old said this time he will not fall back into drugs.

“When I started working in the tunnel to build the Jerusalem-Tel Aviv railway, then it got really bad,” Zaki said. He remembers that working hours were long, the pay wasn’t good, and frustration was high. “That was a job for people who have got no job, who are lost in life,” he said. At the time, he had just gotten out of jail for petty crimes.

Hydro, or synthetic marijuana, first became popular as a "legal high" in the US in the early 2000s, but is currently in decline. It first reached the Palestinian territories via Israel, where it used to be legally sold in kiosks. It consists of a mixture of herbs and other plant material sprayed with chemical additives, which are responsible for its psychoactive effects, activating the same cell receptors as THC, found in marijuana.

But as a result of its chemical composition, the drug is considered much more dangerous. Its long-term effect is still unknown and less predictable because the chemicals used to produce it keep changing.

“The problem has increased. Drugs have become cheaper. Our youth are increasingly frustrated and graduates feel they don’t have any prospects,” Majed Alloush, director of the Al-Sadiq Al-Taieb association and rehabilitation centre, told Middle East Eye.

Israel, where the drug also spread like wildfire, introduced a dangerous substances law in 2013, outlawing its sale. In Palestinian-controlled territories, it is also illegal to sell without a license and, so instead is bought from dealers.

A new era of taking drugs

“We were able to document 38 different kinds of Hydro,” said Issam Jiwehan, director of Al-Maqdese, a social development NGO in East Jerusalem and its suburbs.

“They market it in attractive packages and as a legal alternative to marijuana,” he said, going through a stash of the packages in which the drug is sold. “This one says it will give you strength; this one is marketed to students, the message is that it helps concentration. Young people are particularly vulnerable to this kind of marketing.”

Despite a wide availability of heroin and other drugs, Jiwehan says Mr Nice Guy is the one that worries him the most, particularly because of its widespread use amongst school children and teenagers.

“We had our first case in 2011, and since then more and more young people have been coming to our centre because of it, referred by their parents,” Jiwehan said. “Our youngest case was 14. It provokes hallucinations, and because it is taken by children who are not used to taking drugs, it may lead to psychological problems.”

“The problem is everywhere. But in Jerusalem, it is visible on the streets,” Alloush told Middle East Eye. He runs a drug rehabilitation centre in Al-Eizariya, a town located less than three kilometres from Jerusalem, cut off from it by the separation wall.

“Since the 1980s, drugs have been widely available in Palestine – hash, heroin. But in the past four years, most of the people coming to our centre are addicted to Mr Nice Guy. They are young people, usually 16 to 20,” Alloush said.

He believes that neglecting the drug problem in East Jerusalem is part of a deliberate Israeli strategy to eat away at the fabric of Palestinian communities. “It’s a war over every square metre of Jerusalem. For drugs, there's nothing people wouldn't sell, including their homes, their country,” he argued.

The separation wall has disconnected Palestinian neighbourhoods that had been an integral part of Jerusalem since 1967. Their residents, who hold Jerusalem ID cards, have family and economic ties to the city.

In addition, political and economic pressure has caused many poorer residents of East Jerusalem to relocate outside the barrier, where housing is cheaper. In order not to lose their status as Jerusalem residents, they often relocate in areas that are administratively part of the Jerusalem municipality under Israeli control, but are cut off from Jerusalem by the wall - such as Shuafat refugee camp, Kufr Aqab and Samir Amis.

Residents pay the arnona (municipal tax) but get little in the way of services, including policing. Their neighbourhoods have become no man's lands, pockets of lawlessness for trading drugs, weapons, stolen cars and rife real estate speculation.

"The Israel national police carry out operations against drug dealers and drug distribution in all areas and neighbourhoods of Jerusalem,” said Israel police spokesperson Micky Rosenfeld. Operations in some neighbourhoods, he said, "are more dangerous than in others".

“The drug issue is not a priority for the Israeli police,” Issam Jiwehan of Al-Maqdese contended. “Security is their priority. They are not interested in solving the problems of the Palestinian communities.”

Neighbourhoods and villages in East Jerusalem, a patchwork of different adjoining neighbourhoods that fall into either Area B or C of the West Bank (under Israeli security control as per the Oslo Accords), are no better.

The Palestinian police are only allowed to operate there with prior coordination with the Israeli authorities. But as the International Crisis Group pointed out in a 2010 report, Israel rarely allow Palestinian security forces to carry out operations in Area C or B, other than for the purpose of fighting political opponents.

In 2015, three Palestinian police stations were allowed to open in the East Jerusalem governorate, in the villages of Abu Dis, Al Ram and Biddu. This led to a number of drug-related arrests, but the fragmentation of the population into those with West Bank IDs and those with Jerusalem IDs further complicates matters, as the Palestinian police have no jurisdiction on the second.

“We are allowed to arrest criminals and drug dealers that we find operating in Palestinian areas, and hand them over to the Palestinian DCO (District Coordination Office), which coordinates with the Israeli authorities on matters of security,” Colonel Emad Yassin, chief of the police department in the Jerusalem governorate, told MEE. “But we cannot prosecute them as they’re under Israel’s responsibility. What happens is that we often see those dealers back on the streets a few days later."

Drugs are also produced here. “There has been an increase in the past year and a half, especially in Mr Nice Guy factories, particularly in Kufr Aqab and Anata,” Yassin said. “It costs 120 shekels ($30) to produce at home. They use any substance they can find, including pesticides.”

Daoud, who did not wish to use his family name, was a dealer for nearly 30 years. He says he used to sell from his flat in Al-Eizariya.

“This is Area B, there is no law enforcement,” Daoud said. “Before the wall, even Israelis would come to my house to buy from me."

He dealt mainly in heroin, to which he was also addicted. The big dealers were the people he bought from – mostly in the Israeli cities of Beersheba and Lod. Since leaving prison a year ago, he says religion has helped him find a way out of it as well as some acceptance from the community.

According to a 2011 Palestinian Central Bureau of Statistics study, there are 80,000 drug users in the occupied Palestinian territories, including Jerusalem and the Gaza Strip. A new anti-drugs law was approved by Palestinian President Mahmoud Abbas at the beginning of November, which includes the sentence of hard labour for life to crack down on traffickers and manufacturers.

Issam Jiwehan says his NGO has been through large funding cuts in the past four years. “Unfortunately, in our circumstances, we are not able to set our agenda, and donors decide what their priorities are,” he said. “When it comes to drug programmes, there is currently more of a focus on harm reduction – distribution of condoms, needles.”

Al Maqdese used to be able to help fund rehab treatment expenses. “Now sometimes we help former addicts pay for another person’s ,” he said, adding that most of the organisation’s staff are volunteers.

“But in recent years, Palestinian communities have begun to accept our work, instead of pretending the problem is not there." 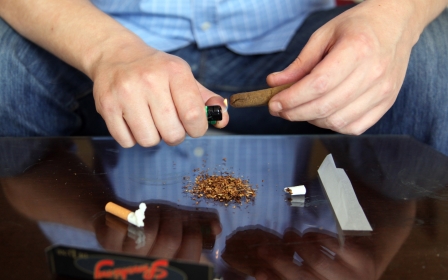