Bilingual Arabs living in America often speak a mix of English and Arabic that some like to call Arabish, Englic or Englabic 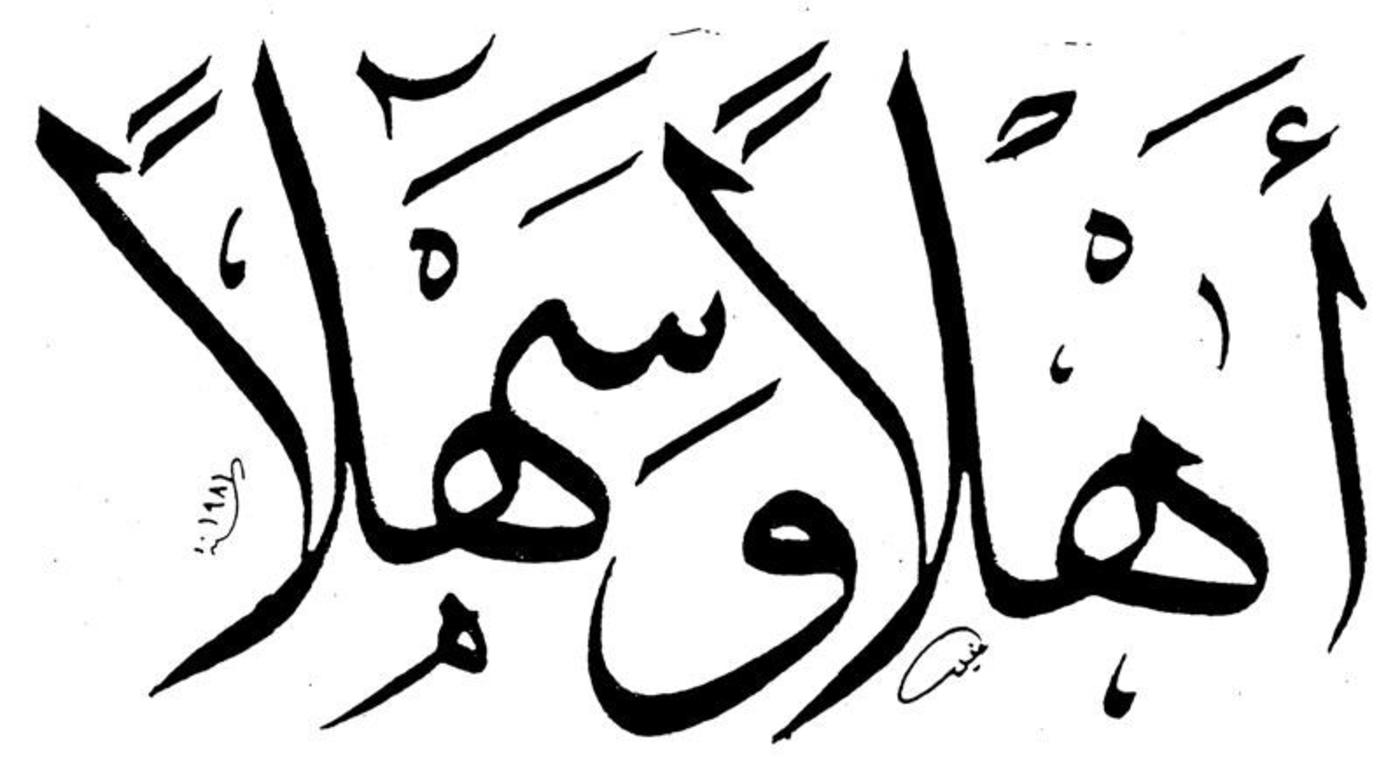 “Fefe, what are you doing?”

“I’m in the kitchen, ijleeing (washing the dishes).”

I could hear my mother giggling from the living room.

“It is when you’re an Arab in America, Mama.”

I may have been 12 or 13 years old when this conversation took place, even though my skilful word coding started as soon as I could speak in full sentences.

Later on in life, I found out that it was a universal phenomenon for bilingual speakers to add the "-ing" to any verb. My mother found it very amusing and always got a kick out of it.

Whatever the label, it is a mix of English and Arabic akin to the idea of Spanglish.

However, not only is it Arabic and English, but it is also a mix of all the vast and different Arabic dialects meshed into one. Ranging from Moroccan to Egyptian to Syrian.

Growing up, the only Arabic I was exposed to was Syrian and fus7a (Classical/Literary Arabic). My parents, uncles, aunts, and grandparents all spoke with the ear-pleasing shami (Damascus) accent that many people wish to have.

My mother also cancelled all English cable and TV channels from our household for seven years and replaced them with Arabic ones. No Disney channel. No Cartoon Network. Instead we had Arabic cartoons, Syrian TV shows and Turkish soap operas. We were not even allowed to speak English at home, and if we did, my grandfather would pull us to the side and we would get a two-hour-long Arabic lesson. That is where my fus7a was learned and my shami was strengthened.

From age six to 13, it was only shami and fus7a Arabic at home, and only English at school. When I got to high school, I befriended more Arabs. And none of them were Syrian. They were Yemeni, Jordanian, Palestinian, and Egyptian; all the different shades of brown - introducing me to different Arabic dialects.

The dialects are so different they could almost be classified as different languages. I was a little more familiar with Egyptian since my uncle is Egyptian. But, even then, whenever he spoke to me I only stared in ignorance and nodded when it seemed like it was an appropriate time to nod. The only Egyptian words I recognised were shib shib (flip flops), Izayik (How are you?), 3arabaya (car) and 3amlah eih (How are you?/What have you been up to?). But even when he would ask me “3amlah eih” I would respond with “homework” or “nothing,” thinking he was literally asking me "What are you doing?" And then after realising that what he was really asking me was "How are you doing?" - so then I would try to play it off.

I now have a lot of Egyptian friends and can navigate the dialect much easier after a good six to seven years of constantly being around them.

My Palestinian friends are in a constant argument about the "ch" and the "k". The Palestinian countryside dialect substitutes the k sound with ch sound. And it sparks an argument almost every time there is a madani (city) Palestinian and a fala7 (farmer) Palestinian in the same room. Syrians do not even pronounce the k sound sometimes. They replace it with the hamzah (an Arabic vowel).

Personally, its neither. Its "knafeh".

You have Moroccans and Algerians speaking French-Arabic; Iraqis thickening and making their Arabic as heavy as possible; Jordanians substituting the "q" sound with the "g" sound; and the Gulf… well the Gulf, I’ve never really understood anything about them.

But it is all different.

If you are Syrian and you are in Lebanon or Jordan or Palestine, you will not have a problem understanding the dialect because the countries in the Levant are so culturally close and similar, that the only thing that changes in the language is the accent and pronunciation. However, if you venture closer to North Africa and the Gulf, you will have more trouble.

Living in California where all the flavours of Arabs are so vast and different, you have no choice but to learn a little from every dialect.

Even the way we write is different and harder to understand than listening to it.

Honestly, thinking about it, it is both genius and cringe worthy. Like when the heck were numbers introduced into words?

When I first received a text from my friend saying “roo7i nami bala sa2aleh,” I thought she just forgot how to type and the numbers were just typos. She laughed at me and said: “I need to teach you to write in numerical 3arabi (Aaarabi - Arabic)."

It took me a while to realise that the numbers took the place of Arabic letters whose sounds do not exist in the English language. The letters even look like the number that took their place.

7 takes the place of ح, making the hard "h" sound.

3 takes the place of ع, making the hard "ah" sound.

9 takes the place of ط, making the hard "t" sound.

This does not mean that our English and our Arabic is broken. In fact, most of the Arabs I know excel in both languages. My Arabic is so fluent (thanks to my mother and grandfather) that I am almost always mistaken for an immigrant.

“When did you come to America?”

And it is something to brag about considering how hard it is to preserve your language when you were born and raised in a country that insists on cleansing your language from your tongue by shaming you for speaking it.

I have totally earned bragging rights. Especially since the letters are totally and completely different. And you write right to left rather than left to right. And some of the sounds do not even exist in the English language. And it is the third hardest language to learn.

I was late to Englabic. Growing up I did not have many Arab friends and the only Arabic I was exposed to was what I heard and learned at home. Now, it is so 3adi  (Aaadi - normal) to me.

But wow, it is pretty freaking awesome to have this language that only specific people are privy to.

Like when you were in 3rd grade and tried to create your own language with your best friend but ended up only exaggerating different sounds and it sounded like you were speaking Dory’s version of whale.

But this time, it is the real deal. We have our own language. 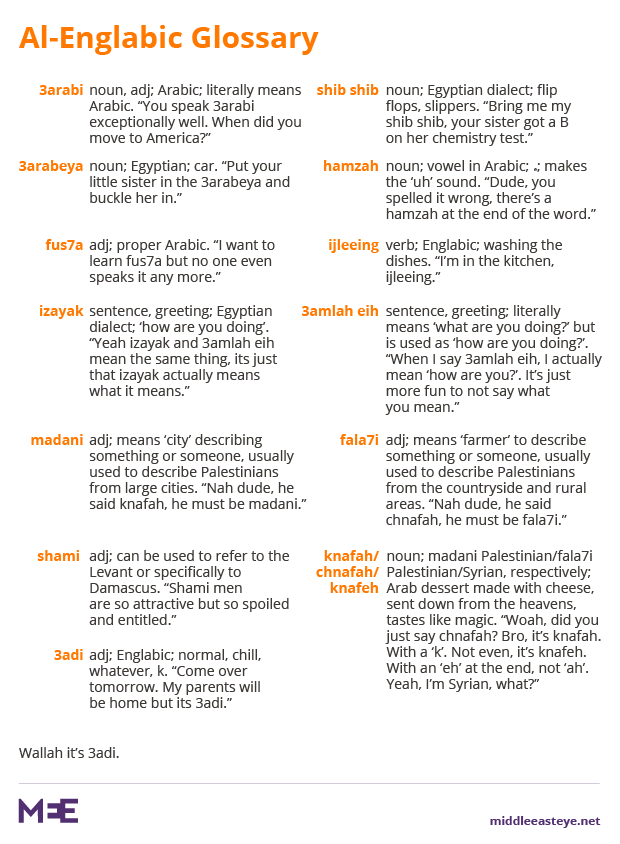 Palestine State
From peddlers to presidents: Inside El Salvador’s Palestinian community
Culture
White gold: Why Tunisians love floral waters
Culture
The people ate my face: How many of these Arabic idioms do you know? Culture
Last stand of a hybrid language from Oman's seafaring past Culture
From Aden to Trafalgar: Arabic leaves its mark on world's languages