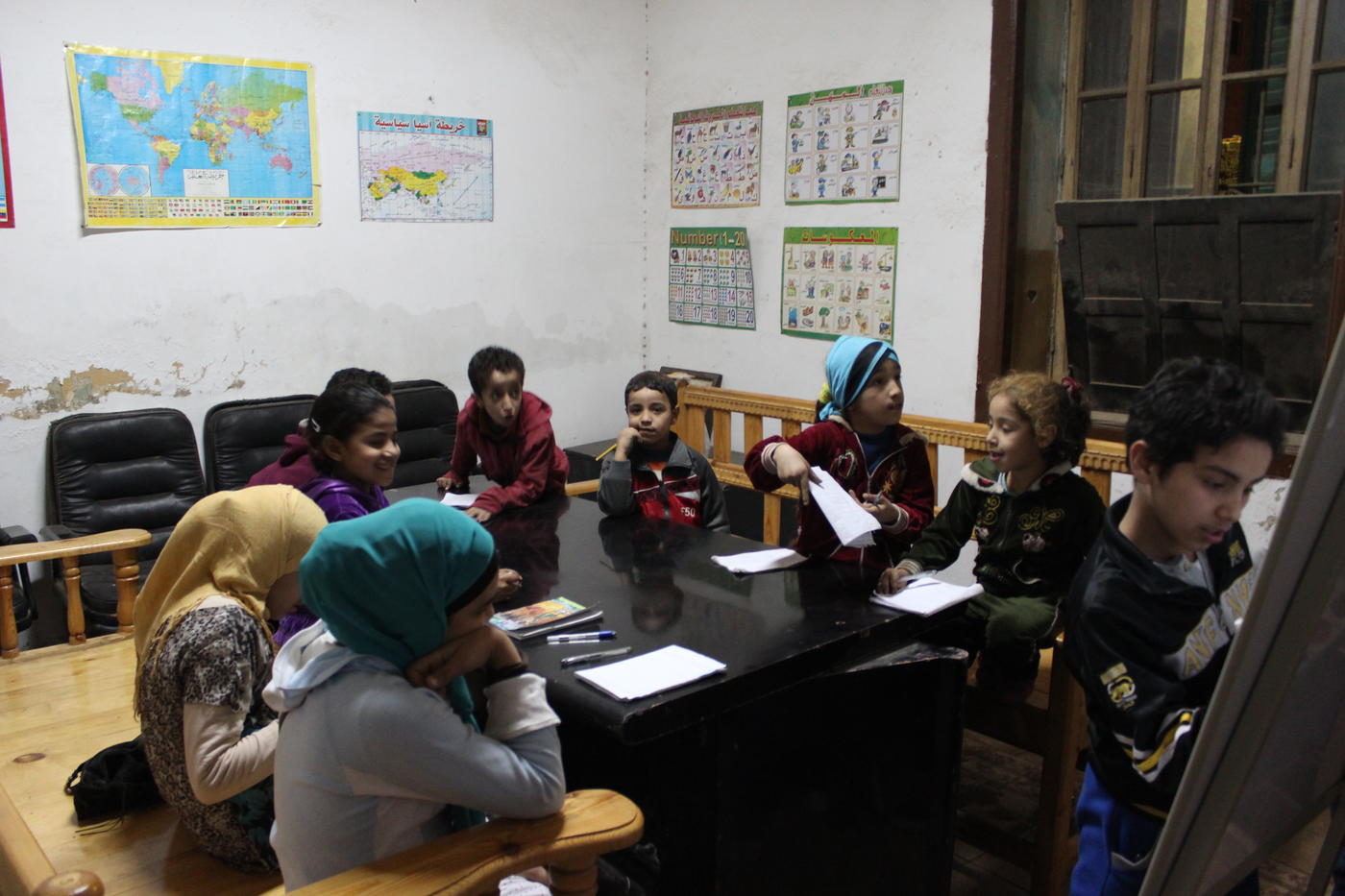 CAIRO - Mostafa Wafa, 24, recalls the time he was walking through Saft el-Laban - the tough, mostly informal suburb of Cairo where he lives - when a group of children approached. They greeted him warmly, but they were breathless and excited, and held knives and sticks. “Uncle Mostafa - we beat them up!” they boasted, referring to kids on another street. The incident stuck in Wafa’s mind.

Wafa and a group of friends decided to offer free lessons to deprived children in the area to address what he sees as the root cause of many of the problems in Egyptian society - an abysmal level of education. “We decided to call it Mish Madrasa [‘Not a school’] because our aim was to be what every public [state] school in Egypt is not.”

Egyptian schools are notorious for their overcrowding, decrepit infrastructure, abuse, rigid and stifling curricula, and didactic teaching methods. Public school teachers receive a meagre salary - rarely amounting to more than $281 a month - creating an incentive to teach a limited amount in order to force parents into paying for private lessons after school. Wafa describes this as a “shadow system”.

“The middle-class guys like me can survive - they can go to the shadow system and pay. What about the children whose parents can’t afford it?” says Wafa. Many children in the area are approaching adulthood but are almost completely illiterate: “This produces guys who are disappointed, ignorant, angry, and violent.”

Wafa and some friends started the non-profit project in February 2014. Around 25 kids turned up on the first day. Mish Madrasa was initially teaching Arabic, English, history and maths. They wanted to teach the children to be critical thinkers, to be more cultured, and to consider alternative perspectives from the national curriculum. Over time Wafa realised that the goals were overambitious: “We were saying things that in an ideal world were great, but in the practical world are not that effective.”

When Mish Madrasa conducted research, canvassing 65 families in the neighbourhood, they found a consensus among the parents’ priorities: they wanted their children to be literate, to speak a second language, and to know how to use a computer. In the survey no one said they were satisfied with the standard of public education, and the kids complained of being abused, disrespected and unencouraged at school. Wafa overhauled the lessons: they now focus on English, literacy and computers - and became more mindful of the children’s emotional needs.

The project faces a daunting set of difficulties. At the moment it is self-funded and they cannot afford crucial supplies such as computers, or a printer or projector. Their teaching space is basic and cramped. Many volunteers have dropped out in frustration or depression, and Wafa faces both hostility and indifference in the neighbourhood.

An Islamist man who runs a local private tutoring centre came to see Wafa and asked: “Are you trying to pull the rug from under me?”

Born of a frustrated revolution

Wafa’s project has its roots in the uprisings of recent years in Egypt and the evolving political climate. He participated in many of the liberal and leftist groups before and following the 25 January Revolution that toppled Hosni Mubarak, but grew disillusioned with these groups and with the potential for protest to enact meaningful change. He now thinks change has to be slower and more painstaking; going into communities that need help and working with them. Wafa is channelling both a sense of both inspiration and frustration from the uprisings into Mish Madrasa.

In November 2014, Hamada Zedane, 31, and some of his friends set up Megraya, a cultural centre in Malawi - a largely poor, conservative area of al-Minya. The word Megraya refers to channels that divert water from the Nile to irrigate fields, and the centre host concerts, plays, film workshops, screenings, art exhibitions, poetry readings, a library and other cultural events, mostly aimed at young people.

Zedane says that the project aims to inspire and educate, whilst also bridging divides between Christians and Muslims, in an area notorious for sectarian violence, by bringing the communities together through art. “We try to bring culture to the streets to reach ordinary people,” says Zedane.

Like Mish Madrasa, Megraya is self-funded and Zedane says it arose out of the failure of the educational system in Egypt, and the seismic shifts in thinking among young people following the uprisings. Like Wafa, Zedane now also eschews protest as a means of change, even though he has relied on it to create the conditions for his centre.

“If Mubarak was still here Megraya would not exist. The authorities didn’t tolerate cultural projects not linked to the government,” says Zedane. “The youths that went into the streets for the two revolutions think that they failed, so they are just trying to change things in their neighbourhoods. In Mubarak’s time there was no hope to change anything - now at least there is a little hope. Because the 25 January Revolution was not just a revolution against the government, it was a revolution in all aspects of life … more freedom of thought is the main gain.”

Omar Hamilton, founding member of activist film-making collective Mosireen, speaking in December 2013, said he believed that the measure of the revolution was partly in how communities are organising and “stepping in to fill the holes that were left by the non-existent corrupt state … There are lots of ways in which the space of the revolution has entered into people’s lives in a kind of personal, community sense.”

Mish Madrasa and Megraya are part of a small but distinct emerging trend of grassroots educational and cultural projects, which also include initiatives such as Bagha Khan in Sohag; Afaq cultural centre and the Wamda bookstore in Assiut; and Tanweera cultural centre in Qena. Many of these groups share a pluralistic, non-Islamist and non-authoritarian approach - regarded as essential principles of the uprising by many revolutionaries.

Yet, as projects like this grow and develop, they may face pressure from the authorities, who embarked on a widespread crackdown on perceived dissent and non-conformism following the military’s overthrow of former president Mohamed Morsi in July 2013 - including a proposed law on non-governmental organisations (NGOs) that many rights groups have labelled as highly repressive.

Existing legislation is already strict and some organisations have recently come under threat. The Nebdy Foundation, an Egyptian NGO providing education, healthcare and employment in the informal Cairo neighbourhood of Mansheyat Nasser, was recently ordered to evacuate its premises by the government.

Ghosoun Tawfik, assistant researcher in the Egyptian Centre for Economic and Social Rights’ (ECESR) education programme, says that state registration has good elements - such as ensuring that projects are accountable, safe and transparent, “but the level of restrictions is forcing people who are trying to achieve something in education or in civil society to quit and it is risking their safety”.

Zedane says that Megraya’s aim is not to influence people’s political thinking, only to open their minds: “We are trying to educate people through culture, so that a civil society can arise.”

Likewise, Wafa says that Mish Madrasa avoids politics and says he is keen for them just to have the basic tools to enable them to think for themselves. “I want to make them at least able to do their own research,” says Wafa. “I want them to realise that what I am saying is not ‘true’ - it’s my perspective.”

“Now, after one year, we can observe a slight change in them. The guys who were holding knives, now they are a bit better,” says Wafa.

Zedane mentions a young man in Malawi who has made a short film using a mobile camera and wants to screen the movie at the centre. “Before Megraya these youths didn’t have a place to go and they didn’t have any interest in stuff like this,” says Zedane. “This is what makes me think it has made a difference.”

But many difficulties remain - notably overcoming hostile attitudes, a repressive political environment, governmental bureaucracy, a widespread sense of disillusionment and a lack of funds.

On a Sunday afternoon children were waiting outside Mish Madrasa two hours before the lesson was due to start. When the class began, around 20 children - girls and boys between six and 13 years old - crowded onto benches. There were tears over a missing pen and a lost competition, the table was nearly tipped over a couple of times by boisterous antics, but Wafa has a warm rapport with the children and commands their respect, and the children were eager to learn. At the end of the two-hour class Wafa was tired but the kids didn’t want to leave.

It is clear that much of the project depends on Wafa’s energy and dedication and he is looking to inspire other people to launch similar projects in other informal neighbourhoods. “What if there were small centres like this everywhere? The city would change,” argues Wafa. “But we have to be the model. We have to make an effective system.” In Egypt, the times and protests are a-changin' 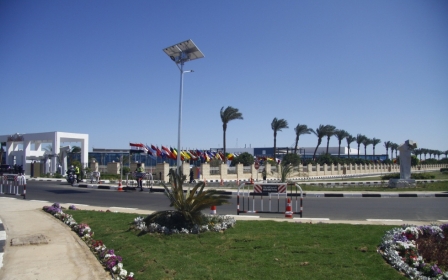