In ‘defence of the oppressed’: Dangers of practicing law in Egypt

Lawyers say they risk being jailed for their work defending government critics, with hundreds already believed to be behind bars 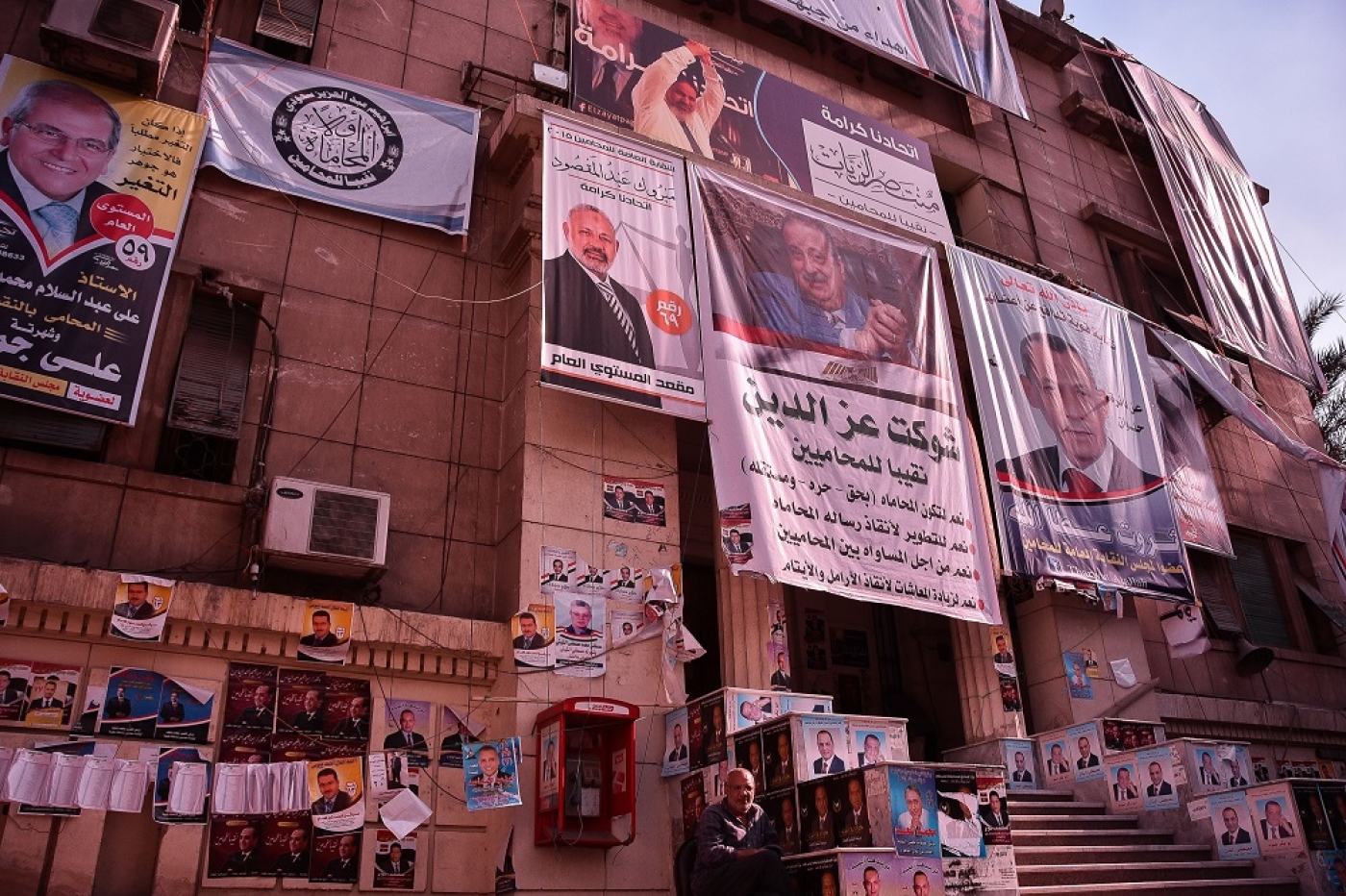 Egyptian lawyers have increasingly found themselves falling foul of Egypt’s courts and ending up in prison. According to human rights groups there are at least 200 lawyers behind bars although a high-ranking lawyer told Middle East Eye that he believed that at least 240 had now been imprisoned for political reasons, including trying to defend alleged political prisoners.

Abdel Aziz Youssef is one of the many young lawyers who is currently locked up in an Egyptian prison. The 28-year-old was taken from his family home in Sharqeya at dawn on 18 August. He was accused of protesting in a small village near Belbeis in the Sharqeya governorate, where his family lives. The charges include impeding public utilities and the interests of citizens, although he denies this.

“Our colleague Abdel Aziz Youssef was in Cairo working on the day of the protest,” one his co-workers wrote on Facebook. “Being a lawyer and defending the oppressed has become a crime in a country that does not respect freedoms … the lawyers’ syndicate has been busy with reaching authority, without paying heed to the interests of lawyers.”

Since the overthrow of Egypt’s first democratically elected president Mohamed Morsi in July 2013, some 40,000 people have been arrested and hundreds more sentenced to death in highly controversial mass trails.

In its 2015 report, Human Rights Watch criticised Egypt for passing through a year of “flagrant abuse of human rights” and called on the government to do more to stop abuses. Many of those who have been targeted are accused of being members of the now outlawed Muslim Brotherhood organisation but secular activists and liberals have also fallen foul of the authorities.

Despite mounting criticism though, prison conditions remain extremely poor with many complaining of unfair imprisonment and treatment.

“I had read and heard about it a lot from those who had experienced it [prison conditions]… and I was always close to it by virtue of my family’s interests in public affairs and later because of the nature of my job, but it never occurred to me that one day I would be one of the victims that people speak of as merely numbers,” Youssef said in a letter released earlier this month.

Colleagues and friends of those imprisoned have repeatedly taken to the streets in protest, but the police response has tended to be harsh. Many have been beaten and Kareem Hamdy, a young lawyer, died after police allegedly tortured him during interrogations in Cairo.

The government denies this and Ayman Hilmy, a spokesman at Egypt's Interior Ministry, told Reuters that: "There is no crisis or problem between the police and the lawyers. All sides work according to the law."

Lawyers, however, tend to tell a different tale.

Halem Hanesh, one the lawyers working on the case of Esraa al-Taweel, a 23-year-old amateur photojournalist who was first forcibly disappeared over three months ago and has been detained ever since, says that lawyers are now being purposefully targeted for the work they are doing and for defending those who have been arrested or detained.

“The simplest example [of impediment]… there are at least seven or eight lawyers that are now detained in cases that they had previously been working on as lawyers,” Hanesh told MEE.

Mahmoud Abdelgawad, a lawyer at the Egyptian Centre for Economic and Social Rights’ (ECESR) criminal justice unit and a member of the Front to Defend Egypt’s Protesters (FDEP) also claims that lawyers are afraid of getting enlisted as defendants on the cases.

According to him, this has happened to a number of Muslim Brotherhood lawyers, who were either accused of judiciary abuse or had security agents file reports claiming that they “share ideologies with the defendants”.

Apart from arrests, lawyers also complain that their day-to-day tasks are getting more difficult, with legal counsel having to provide many duties at once.

With a growing number of clients - especially those facing military trials - detained in solitary confinement, or in high security prisons, Hanesh says lawyers are often tasked with bringing food or medicines.

“You are not just defending the client anymore… but you are doing subsistence type of work. So your job as a lawyer becomes to get food for your client, or if this detainee is not allowed family visits, your job will include sending letters back and forth,” Hanesh said.

As media is not allowed in the courtrooms, lawyers are also having to learn to be journalists, he explained. At times, the role of private detective is also required, especially when it comes to military trials and private cases, with authorities refusing to tell legal counsel where and when the trial is being held.

“There are lots of [new] difficulties…. And all kinds of humiliations that lawyers have to put up with,” Hanesh said.

A key complaint is not being able to take belongings into the state security prosecution buildings.

“This bag has all of my tools, it has all the clients’ paperwork, and it has my agenda… which I will need to take notes in,” Hanesh said. In addition, he says it is now “impossible” for a lawyer to be present during a client’s first investigation, which means that they cannot consult on the charges and possible pleas.

Self-employed lawyer Mohamed Fadel, who has been practicing law for three years and previously worked for Nazra and ECESR, says he feels like a puppet.

“The procedures that state security prosecution put for lawyers starting from the process of waiting outside for several inspections, and entrance without paperwork, and the prevention of speaking to the defendant or even looking at the charge sheets… you’re basically just there as a puppet.”

Sometimes things go downhill further once you get to court.

“You’re standing [there] in front of a politicised judge that has no problem sharing his political views on the stand… like Nagi Shehata,” Hanesh said in reference to a judge who has handed down hundreds of death and life sentences over the past two years. “If you go file a report against a judge… the officers will usually decline to file it.”

But others are less negative. ECESR’s Abdelgawad says that the post-revolutionary climate has been a mixed blessing for lawyers.

“We can’t deny the effect of the [25 January, 2011] revolution [that toppled former president Hosni Mubarak] on all sections of the Egyptian people and among them lawyers,” he said. “The revolution broke the fear barrier for all.”

“Media documentation has widened and gained professionalism which has helped lawyers in many cases, especially when it comes to cases of public opinion whether they are criminal or political,” he said.

On the other hand, Abdelgawad says his biggest fear these days is that “the defendants pay the price of a lawyer’s insistence to apply the law".

He says that he is often penalised by judges for wanting to bring additional witnesses who might support his case, with judges postponing trials for long periods of time if any extra witnesses are brought forward.

The lawyer also criticised recent amendments, brought in gradually since 2013, claiming, “Most if not all the amendments to the penal and criminal codes [have taken place] in the absence of the legislative authorities [which] raises doubts about them.”

As a result, the defence no longer has the right to listen to opposing witness testimony, he said. Another key issue has been the introduction of terrorism laws in August which set up special courts for anyone accused of belonging to, leading, or financing terrorist groups (including the Muslim Brotherhood), and for journalists accused of publishing false information, or promoting ideas against the military or promoting violence.

Abdelgawad said the scope of the laws was so broad that large numbers of Egyptians risked being ensnared by the system.

"Egypt has more than 60 million probable terrorists - on top of them are the lawyers,” Abdelgawad said.

Self-employed lawyer Mohamed Fadel told MEE it was all getting to be too much.

Over the past three years he said the state had narrowed the space in which lawyers could work and had made representing defendants more difficult.

The government saw lawyers as a conventional formality alongside judges and prosecutors he added, "but if it could have banned us from being there, it would have".

Despite the obstacles, however, few want to give up their work and many lawyers are vowing to fight on.

"I chose to be a lawyer because it is a profession that constantly challenges oppression and the dictatorship of the ruling authority," Fadel said.