Every Ramadan, many Egyptians collaborate to fund and organise Iftar tables for the less fortunate as a form of charity 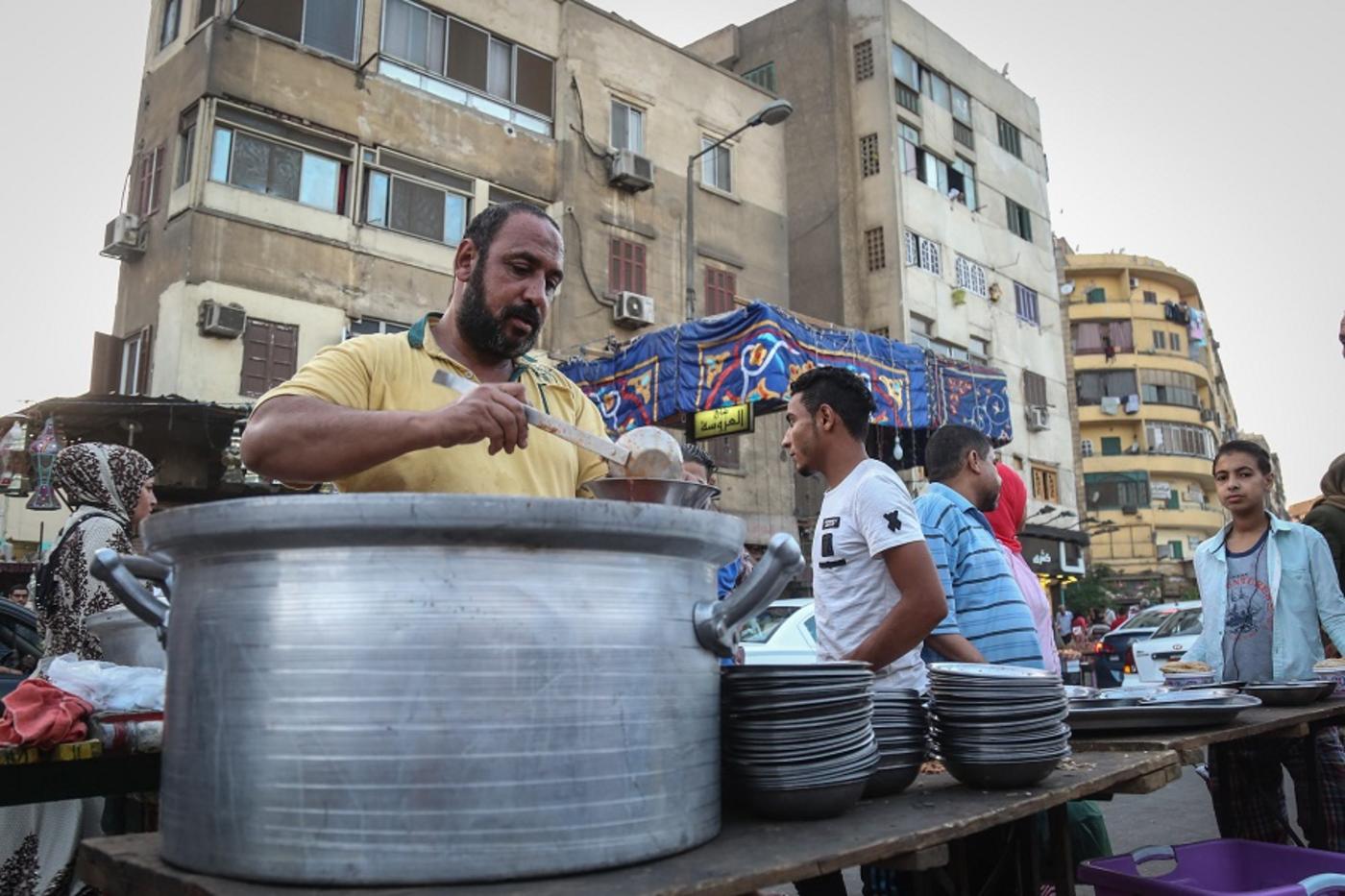 During Ramadan, many people are compelled to organise free food banquets for the breaking of the fast (MEE/ Mohamed el-Raai)
By
Leena ElDeeb

CAIRO - Minutes before the call to maghreb (sunset) prayer, people get ready to break their fast at one of many iftar tables set up in the streets of Giza province near Cairo.

Volunteers rush to finish placing hot plates filled with chicken, veal, rice, vegetables and an assortment of glossy pickles, as people are already seated and eager to start eating after hours of refraining from food and drink.

Cold traditional drinks such as sobia, which is a mix of milk, vanilla and coconut, amar al-deen, which is made from concentrated apricots, and karkadeh, a sweet hibiscus drink, are served to quench the thirsty throats of Egyptians that have been without liquid under the scorching sun all day.

'Families, individuals, and sometimes even Christian families join [the banquet of compassion]'

In Omraneya, a suburb of Giza, 12-year-old Islam Sameh is seated at a table for four at Ma’edet Rahman – Arabic for Banquet of Compassion –  across the street from the public hospital for respiratory diseases. “I come here every day. I like the food here; even when dad cooks, I come here,” Sameh tells MEE. He lives with his father and two younger siblings in Sakiet Mekky, which is walking distance from where the feast is taking place.

Sameh's favourite subject at school is maths. When he grows up, he dreams of becoming a police officer like his grandfather. “Oh look, here are my siblings,” Sameh cheerfully calls out as Nourhan, 12 and Ibrahim, 9, run to the table to greet their brother. They are followed by their middle-aged uncle who has just parked his tuk-tuk outside.

When the call to maghreb prayer echoes from neighbouring mosques, the conversation about their day comes to a halt and they start to devour the delicious veal, gravy and rice on their plates.

Mohamed Mahmoud, one of the volunteers, tells MEE that many of the people join the banquet on a daily basis. “Families, individuals, and sometimes even Christian families join [the banquet of compassion],” he says, adding that once people finish their meals, they usually leave to give their space for others eager to eat a warm meal.

The spirit of giving usually rises during the Islamic holy month, where fasting increases Muslims’ sympathy towards the less fortunate who cannot afford food or drink.

Every year many Muslims are driven to organise free iftar dinners targeting the less fortunate, those working long hours or several jobs to make ends meet in the country's deteriorating economy and others who cannot make it home for iftar. But the banquets of compassion are open to everyone whether they are Muslims or not, to create a sense of community.

Those stuck in a car or in public transport during iftar are often stopped by young men and women offering free juice and dry dates to individuals not able to make it home in time to break their fast.

“I get really happy when I see them on my way home. Their presence is a very delightful, and makes me feel the warm Ramadan atmosphere,” says 22-year-old Farah Sadik.

'The neighbourhood is very cooperative and almost everyone volunteers to help'

-Nesreen El-Mohtady, in charge of cargo at a cement company

Nesreen El-Mohtady is a mother of three young girls and in charge of cargo and transport at a cement company. For the last five years, she has been raising funds and organising the Omraneya banquet with the help of her driver Mohamed Mahmoud, whom she has known for more than 20 years.

She raises around EGP 65,000 (US$3,591) every year from generous donors to host 80 people every Ramadan. Mahmoud’s mother and wife cook the food served in this banquet, which is set up in the hospital's former parking lot.

"The neighbourhood is very cooperative and almost everyone volunteers to help," says Mohtady.

The local supermarket donates a box of cooking oil and some give away bags of sugar. According to Mohtady, a Christian man has offered them a free place to cook in for around four years.

In April, the annual inflation rate in Egypt grazed 33 percent, overtaking 44 percent for edible goods. Egypt has seen unprecedented price increases since the authorities allowed the Egyptian pound to float last November, all part of a reform plan linked to a $12bn IMF loan.

“Two weeks before Ramadan, prices skyrocket,” Mohtady tells MEE. “Especially because everything doubled after the flotation of the local currency.”

Mohtady tries to beat the increase in prices by shopping for food around one month before Ramadan even starts, and paying deposits to rent the tables for the banquet upfront.

She also purchases a calf and at least 20 chickens and borrows a freezer to store them until Ramadan. The location of Mohtady's banquet is convenient for the families of patients getting treated at the hospital across the road.

"The hospital only provides the patient with free meals for Iftar, so the parents or the accompanying family come down to eat the free Iftar that the Ma’eda [banquet] serves here," she says.

Mohtady's youngest daughter is sitting on her lap, while being spoon-fed rice and Molokheya, a traditional Egyptian dish, as they join the people for iftar.

“I want to teach my daughters a lesson of equality. I want them to grow up with mindsets that are free from classism,” she says, adding that she tries to join people in the banquet for iftar at least twice during Ramadan.

'I want to teach my daughters a lesson of equality. I want them to grow up with mindsets that are free from classism'

- Nesreen El-Mohtady, in charge of cargos at a cement company

Mohamed El-Gazar, a civil engineer, tells MEE about his experience volunteering and helping organise another banquet in a village in the Nile Delta province of Sharqiya.

“The workload is divided among several volunteers; everyone pitches in with something; who has a car would run errands delivering groceries for example, who knows merchants and stores would buy items on the shopping list for a good bargain; and who knows how to cook would be responsible for the cooking,” Gazar says. “We also used to deliver meals to houses of those we know are in need."

'I feel like that is what Ramadan is all about, sharing the same food, laughter and good talk with strangers who become friends from diversified classes and backgrounds'

Other Egyptians explained what the "banquets of compassion" mean to them in Ramadan.

"I feel like that is what Ramadan is all about, sharing the same food, laughter and good talk with strangers who become friends from diversified classes and backgrounds,” Aya Yakout, a college senior, tells MEE.

Others who can afford to buy their own food prefer not to participate in the banquets in order to leave their spot for someone in need.

"I would like to join, so I could sit with different people, in a different atmosphere, to get to know them better, listen to their stories and feel their joys and pains. Because of that I would be more grateful for the good things in my life that I take for granted and sometimes even feel ungrateful for,” 22-year-old Reem Ismail tells MEE, adding that she would rather join the banquets as a volunteer, so people that are more in need can benefit from the food on offer.

Not far from the notorious Torah prison on the outskirts of Cairo, another banquet is being prepared, where many prison workers await the cue to break their fast.

The high-security prison, also known as al-Aqrab prison, has held many high-profile prisoners such as former Egyptian President Hosni Mubarak, who was briefly held in the prison's hospital. In March he was acquitted of conspiring in the killing of hundreds of protesters during the 2011 uprising.

Other prominent political activists have also been detained in the prison including Alaa Abdel-Fattah, who has been confined in the prison's walls since 2014 for violating Egypt's controversial 2013 protest law.

Two of the young men seated at Torah’s Banquet of Compassion are 30-year-old Adel Ibrahim and his 35-year-old colleague Ramadan Mahmoud. Originally from Kafr El-Sheikh, in the Nile Delta, they travelled around 132 kilometres to work as builders, mending and rebuilding the prison's high walls.

The banquet - organised and funded by a high-ranking police officer - targets blue-collar workers and officers who work in the neighbouring prison and do not live with their families, such as Ibrahim and Mahmoud.

Today's feast consists of rice, peas and meat. The men, who are exhausted by the end of the day from their physically demanding jobs, appreciate the fact that they can get a free warm meal and have a sense of community, even far away from their families.

Mohtady cannot stop thinking about what the less fortunate will do following Ramadan. She hopes one day to launch a small project that will keep on giving.

“I dream of a food cart in the street that serves homemade food [like] rice, vegetables, pasta and a piece of chicken or veal,” she tells MEE.

“The food would also be served for free for those in need, and for the ones who could afford to pay, the cost would be EGP 10 ($US.55) or whatever they can afford. But red-tape governmental procedures make this dream very difficult to achieve.” Ramadan
Tambourine in hand, a Christian wakes up Muslims for Ramadan