Evicted migrants turn to the hills in Morocco 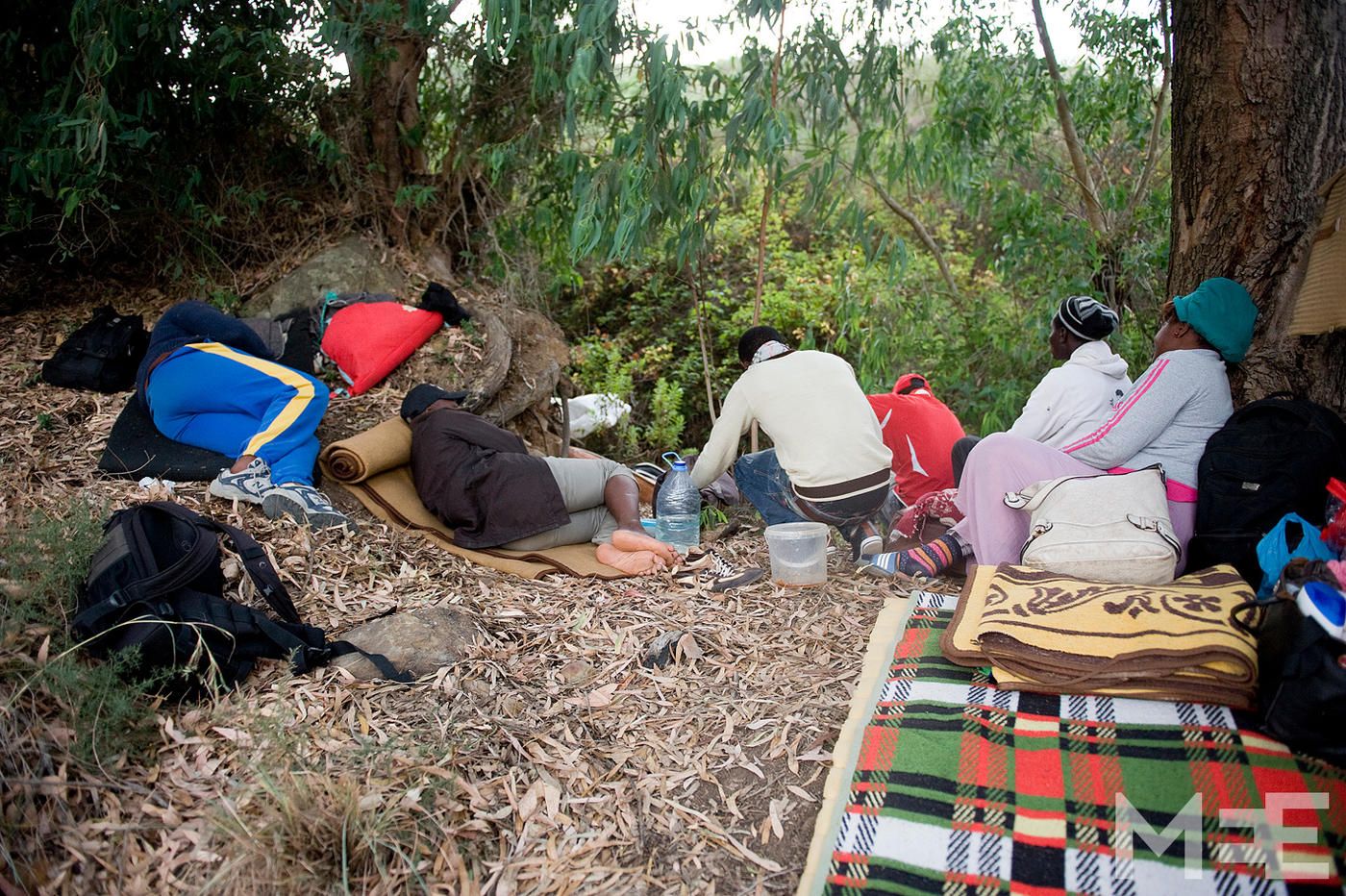 Migrants take refuge on a hill near the area of Boukhalef, on the outskirts of Tangier (MEE/Rik Goverde)
By
Rik Goverde

TANGIER, Morocco - Once again, migrants in Morocco are on the run without a place to go. Last week hundreds were evicted from the apartments they illegally occupied in the area of Boukhalef, on the outskirts of Tangier. Pregnant women, children and men were driven from the houses they lived in, with their belongings sometimes thrown out of the windows.

Hundreds fled to nearby hills or took refuge in the courtyard of the Tangier Cathedral close to the medina, where they have been living since.

Alex, a 38-year-old from Cameroon, had not eaten for two or three days when Middle East Eye spoke to him. He and five others are hiding in a small bush at the end of a rocky path, a steep 20-minute walk from the main road. Spread out on the ground are some blankets and bags; it’s all they have left.

Over the past few days, they have been living off their five-litre plastic water bottles, which they fill in a small nearby stream.

“We’re living like animals. There is no solution. We were evicted from the apartment early last week," Alex said. "Until Friday we stayed in a camp in the forest but the army came and chased us away. They took our matresses and other things in two big trucks. We ran with what we could carry, now we’re staying in the hills in small groups.”

Tension had been building up for quite some time in Boukhalef, a popular area on the outskirts of the northern coastal town Tangier. There, migrants live together in small apartments in a Moroccan community. Usually the houses are owned by Moroccans living abroad. Some migrants paid rent to people apparently posing as landlords, while other migrants just entered the houses and took over.

During recent weeks, however, locals have been threatening migrants to make them leave the houses. In other cases, the real owners turned up and found their houses plundered.

“Myself, two sisters and their babies rented an apartment for 1,500 dirhams a month,” Liliane Kia from Mali, 41, told MEE. She sits on a cement ridge in the courtyard, in the shadow of the Tangier Cathedral. “We didn’t sign a contract, but the Moroccan man told us: ‘This is my house and I don’t need it, so you can rent it.' We believed him.”

It turned out it wasn’t his house, Kia said. “Fifteen thugs with knives came and told us to leave. That was last week, in the middle of the night. I hope we can stay at the church for a few days until things have quited down.”

Removed to other cities

Just before Kia and her flatmates left, the Moroccan authorities had given an ultimatum. Migrants were told to evacuate the apartments within 24 hours. In the morning of 1 July, police surrounded the area and started evicting at least 85 apartments. Many were taken in buses to far-away cities like Marrakesh, Agadir and even Dakhla in the Western Sahara, to discourage them from trying to cross to Europe. Others fled to the hills or into Tangier.

At least one migrant died after he fell from a four-storey building, his friends say, when he was being chased by civilians. One of the friends showed MEE a video of the victim in a hospital, squirming in pain. In the video, a policeman checks and leaves again. “Nobody came for two hours, then he died,” his friend, who wished to remain anonyomous, said.

“We’re very afraid and we really don’t know where to go,” said Kia. She came to Morocco four months ago from her hometown Gao, where she ran a small restaurant. The four-week trip through Niger and Algeria to Morocco cost her around 3,000 euros. “We can’t stay in hotels. Too expensive, and hotels are not allowed to take in undocumented people. So we’re at the church, for now. We hope the police do not enter here.”

By the end of last week, at least 200 people had gathered in the courtyard of the cathedral. Among them were pregnant woman and children not much older than a few months.

Henriette, a young woman who was resting on the steps of the cathedral, told MEE how she paid 1,000 dirhams (102 dollars) for rent. Last week, her neighbour from downstairs came in the middle of the night and drove her out. She is over nine months pregnant and may give birth any day. “I told the man: ‘But I’m about to have a baby.’ He didn’t care. I’ve been staying at the church since then. All I have left are the clothes I’m wearing.”

The governor of Tangier, contacted by MEE through phone and email, declined to comment. The the National Human Rights Council (CNDH) also did not respond.

Morocco has been dealing with the issue of undocumented migration for years. At the Spanish enclaves Ceuta and Melilla, migrants used to storm the seven-metre fences from nearby forests. From Tangier they try to cross the sea to Spain in small boats or on self-made rafts.

The kingdom has tried to find a solution under the orders of King Mohamed VI. In 2014, it gave out temporary resident permits to some 18,000 foreigners. With those permits migrants can work, get healthcare and an education for their children. Many migrants still struggle to find jobs, though.

At the beginning of February authorities started rounding up migrants who didn’t receive documents. They cleared the infamous forest camp at the hilltop of Gourougou near Nador. Hundreds were taken to centres all over the country where they were held for weeks. When they tried to return to Gourougou, the camp had been cleared again.

Alex was one of the migrants who was taken at Gourougou. He came from Cameroon to Morocco about eight months ago, after a long trip through Niger and Algeria. From Gourougou he tried to storm the fences of Melilla three times, until the camp was destroyed in February. “I was taken to Ouarzazate in the south and was held in a centre for two weeks with about 30 others. Then they let us go. They have no idea what to do with us.”

Alex made it back north and ended up in Boukhalef. There, the same thing happend again. With the police chasing them out of the apartments and forests, migrants without permits have nowhere to go. The truth is, no one has a solution.

That’s why Father Simeone raises his arms in despair on the steps of the cathedral. About two hundred sub-Saharan migrants are sitting in the shade.

“Their number has tripled since yesterday,” Simeone told MEE. “They are too many; we are not equipped for this. There are not enough toilets. The police have told us that the migrants have to go. Where? I don’t know. They don’t know.”