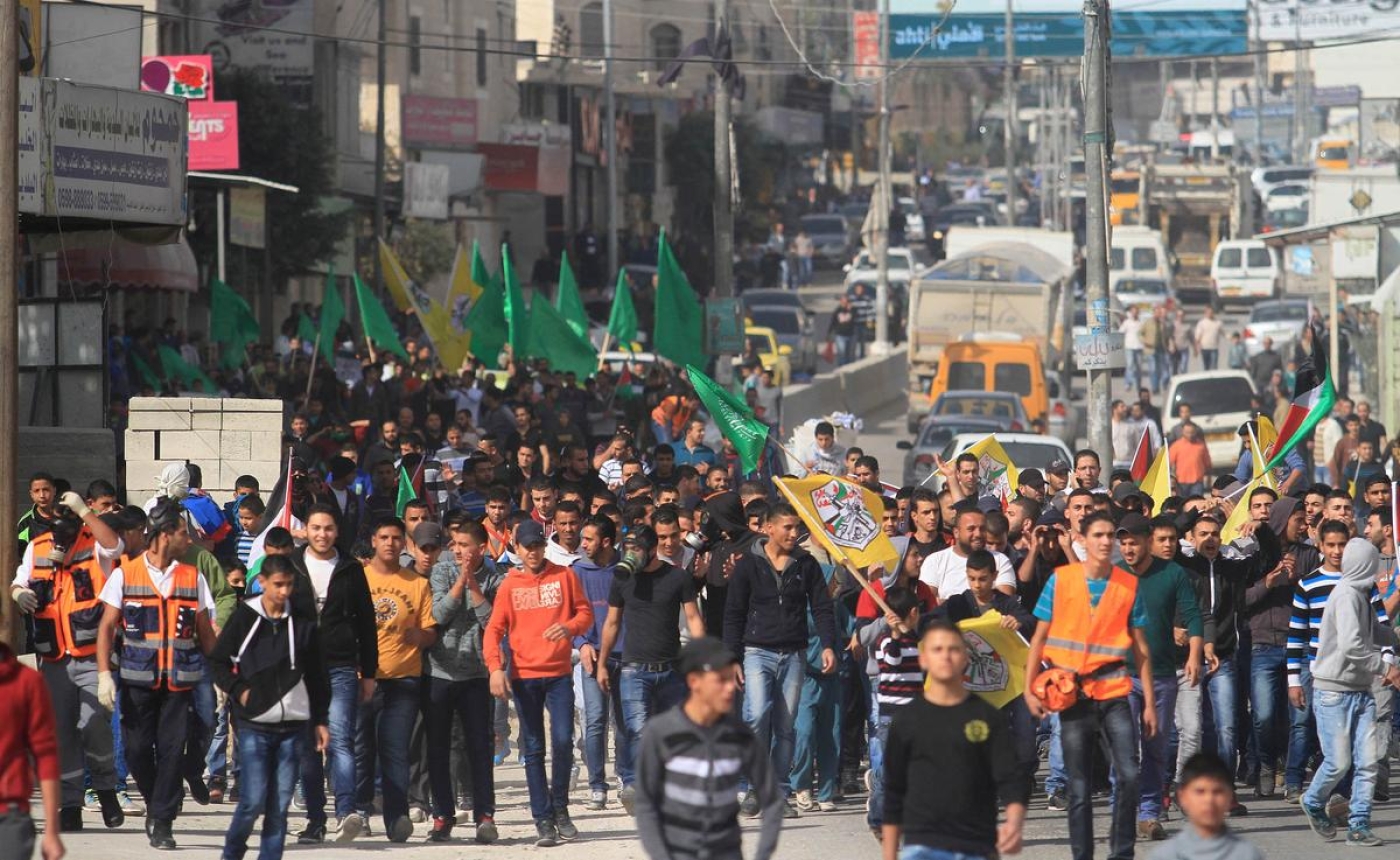 KAFR KANA, Galilee - Rauf Hamdan admitted to one small consolation as he sat in his mourning tent, greeting the steady stream of well-wishers, paying condolences nearly a week after his son was gunned down in the street by Israeli police.

“At least his death was caught on camera,” he told Middle East Eye. “Otherwise the police would accuse me of lying when I said that he was executed in cold blood. The police can claim whatever they like. The truth is there for all to see.”

The killing of 22 year-old Kheir Hamdan - and the CCTV footage of it that went viral on social media - set off a firestorm of protests in Palestinian communities across Israel this past week that has yet to die down.

Hamdan instantly became a symbol of Israeli brutality and oppression, one that merged the experiences of Israel’s large minority of 1.5 million Palestinian citizens with those of their kin in the occupied territories of the West Bank, East Jerusalem and Gaza.

Although their Palestinian inhabitants are disconnected politically and territorially, all these areas currently simmer with a shared and barely suppressed rage that may yet erupt into a new uprising, or Intifada.

The Hamdan family home in Kafr Kana, a town of 22,000 Palestinians in northern Israel near Nazareth, is located in an overcrowded backstreet, close to a church over the site where Jesus supposedly performed his first miracle, turning water into wine at a wedding.

But Kafr Kana, like other Palestinian communities in Israel, feels like a community under an occupation of sorts.

Despite the flood of pilgrims, there are no hotels or major restaurants in the town. Israeli tour buses pay a flying visit that offers Kafr Kana none of the usual benefits of tourism.

Wadea Awawdy, a local journalist, pointed out that half of the town’s inhabitants were under 18. But jobs are scarce, as are the chances of finding land to build a home, usually a cultural pre-requisite here for getting married. None of that looks accidental to residents.

Kafr Kana’s only land reserves for housing and industry have been seized by the state and reassigned to Nazareth Ilit, a Jewish city built decades ago to “Judaise” Nazareth and its environs. “They have a large industrial zone on our land,” said Awawdy. “The only thing we get from it is pollution from a glass smelting factory.”

It is a picture of neglect and marginalisation common in Palestinian communities across the Galilee. Excluded from a meaningful Israeli identity, the minority increasingly feels it shares a common struggle with Palestinians across the Green Line.

The entrance to the Hamdan home hosts a martyr poster of the kind familiar when Palestinians are killed by the Israeli army in the occupied territories. Hamdan’s face is framed by the Palestinian flag.

The passage down to the mourning tent is adorned with images of the al-Aqsa mosque, the Islamic holy site regularly at the centre of Palestinian protests in occupied East Jerusalem.

Wrapped around 50 year-old Rauf Hamdan’s neck is a keffiyeh, a scarf that Yasser Arafat made a symbol of Palestinian resistance.

Over the past week, such scarves have been concealing the faces of some of the thousands of youths who have clashed with police in Kafr Kana and elsewhere during protests against Hamdan’s killing. That has not stopped police arresting dozens of youths.

The keffiyeh has also been adopted by thousands of Palestinian children in Israeli schools over the past week as a visual protest. On Wednesday, a Palestinian Knesset member, Basel Ghattas, caused a flood of complaints when he donned it inside the Knesset.

“We are seen as the enemy by Israel because we are Palestinians,” said Rauf Hamdan. “Our citizenship makes no difference to the security forces.”

Hamdan’s assessment echoes that of an official inquiry into an earlier incident, 14 years ago, when the police fired live ammunition and rubber bullets at unarmed demonstrators in the Galilee at the start of the Second Intifada. Thirteen Palestinian citizens were killed, and hundreds wounded in what have come to be known as the October 2000 events.

The Or Commission concluded that Israeli police related to the Palestinian minority “as an enemy.”

This week, one of the three members of that commission, Shimon Shamir, a noted history professor, said on Israeli radio that the police’s approach to the country’s Palestinian minority had only gotten worse in the intervening years.

That, said Awawdy, was also how it looked to most Palestinian citizens too as they watched the video of Hamdan’s killing.

Hamdan’s final moments late on the night of 7 November were captured by cameras from several angles outside an electrical shop close to his home.

The store’s owner, Ehab Khoury, tutted angrily as he watched the video again. Like others, he was outraged by footage showing Hamdan being shot in the upper body from close range as he tried to flee from a police van.

Judging by Khoury’s reaction and the hushed conversations in the mourning tent, even more infuriating were the scenes of Hamdan, moments after he was severely wounded, being dragged along the ground by his arms and into the van.

“What is he?” said Khoury. “A citizen or a sack of potatoes? Why did they not call an ambulance when it was clear he was badly wounded?”

Police claim they fired a warning shot, though the cameras do not show the officer who fired on him doing so. But one of Khoury’s videos reveals the shadow of a policeman’s raised arm, holding a gun, from the far side of the van, out of the camera’s view.

That night, a bullet smashed through neighbour, Edward Khoury’s bedroom window. If that was the warning shot, it looks suspiciously like it was fired with no regard to the safety of the residents all around.

Other details have further inflamed passions. The video shows the police van driving past the camera on its way out of Kafr Kana, having made a late-night arrest of Hamdan’s cousin following a domestic incident. Hamdan himself had been pepper-sprayed during the arrest.

Many seconds later, Hamdan comes into view chasing after the departing police. Then the van suddenly appears again in view of the camera, the police apparently having decided to return to deal with Hamdan.

The youth is seen banging on the window with an object police say was a knife. But he flees as the police emerge. According to medical reports, he was shot twice.

According to the cousin’s testimony, the police drove around for some long minutes away from the nearest hospitals in Nazareth before heading for a much more distant one in Afula, losing vital time.

“His killing was pre-meditated,” said his father. “The police were leaving. They came back only to kill him.”

Unlawful killings by police have been a continuing occurrence since the 13 deaths in October 2000, said Jafar Farah of Mossawa, an advocacy group for the Palestinian minority.

Mossawa has identified 35 cases of Palestinian citizens being killed in similar circumstances by security forces since 2000, including previous incidents in Kafr Kana. Only in three cases were officers convicted, but the courts handed down short sentences.

“There is the same impunity for the security forces when it comes to using live ammunition against civilians, whether it is in Israel or the occupied territories,” said Farah.

Comments a few days before Hamdan’s killing by the police minister, Yitzhak Aharonovitch, that terrorists “should be sentenced to death” rather than arrested had, said Farah, given “a green light” to police to use live ammunition against civilians.

Attorney-General, Yehuda Weinstein has insisted on an investigation by a justice ministry unit known as Mahash. But few in the Palestinian minority expect it to be thorough.

“I have no trust that Mahash will get to the truth,” said Rauf Hamdan.

That scepticism is shared by human rights lawyers. A recent report by Adalah noted that Mahash had closed without action 93 per cent of complaints between 2011 and 2013, including in cases of clear breaches of police regulations.

Earlier, Mahash was accused of failing to properly investigate the police officers responsible for killing the 13 demonstrators in October 2000. None were ever indicted.

There are signs that the police are expecting similar lenience on this occasion. National Commissioner, Yohanan Danino, dismissed criticism of the police’s treatment of Hamdan as “unfounded” and “irresponsible.”

But the Palestinian minority’s concerns are not limited to police brutality. The political reaction has been equally disturbing.

Rauf Hamdan said no government official had visited the tent, or called to offer condolences. Instead, government leaders have used Hamdan’s death to further question the minority’s status as citizens.

Both Israeli Prime Minister, Benjamin Netanyahu, and his economics minister, Naftali Bennett, have suggested Hamdan was a “terrorist,” placing his fight with the police on a par with recent Palestinian attacks on Israeli civilians.

But more worrying still, Netanyahu has exploited the outpouring of anger in the Galilee to confirm the Palestinian minority’s growing suspicion that the Israeli authorities see no future for them in a Jewish state.

Netanyahu has called on the interior minister to investigate stripping the protesters in Kafr Kana and elsewhere of their citizenship. He has also urged them to “move to the Palestinian Authority or to Gaza … Israel will not put any obstacles in your way."

Foreign Minister, Avigdor Lieberman, also leapt at the chance to promote again his plan to redraw Israel’s borders to expel a quarter of a million Palestinian citizens, saying: “It is clear that territorial and population swaps must be part of the solution. Us here and them there.”

A Palestinian Knesset member, Ahmed Tibi, said Netanyahu had “gone off the rails” in making such remarks, a view shared by the liberal daily Haaretz. An editorial accused him of “exposing his nationalist face to the public.”

Since earlier in the year, Netanyahu and his government have been intensifying their efforts to silence the minority’s Palestinian representatives, both in and out of the parliament.

The electoral threshold was raised in March to a level that may ensure there are no Palestinian parties in the next Knesset. Meanwhile, Netanyahu used the protests at Hamdan’s killing to reiterate plans to outlaw the Islamic Movement, the minority’s most popular extra-parliamentary political faction.

Farah noted that clashes between police and the Palestinian minority were occurring more regularly and growing in intensity. “Once these crises occurred once every decade or more. But they are now a pattern. We saw violent confrontations over the summer during the attack on Gaza and only weeks later it’s happening again.”

There is deep distrust of the police and politicians, but Farah believes the anger is unlikely for the time being to translate into an Intifada. “The leadership here is opposed,” he said. “Despite the hostile atmosphere in the Israeli parliament, courts, media and public, there is still a preference to seek redress through political and legal channels.”

Awawdy, the journalist from Kafr Kana, is more pessimistic. “This government sees us at worst as enemies and at best as guests whose rights can be taken away at any moment. If things keep on this way, an explosion is coming. You can sense it in the air.” 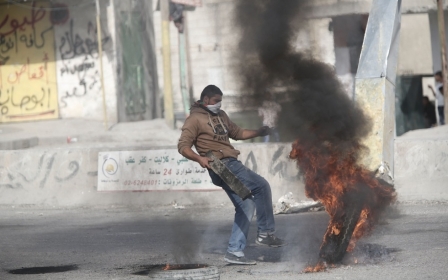 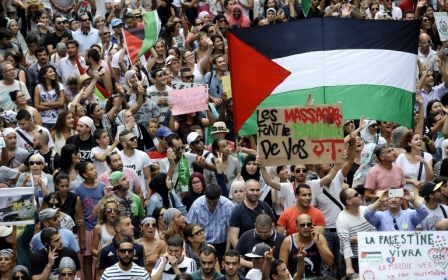