Numerous NGOs are distributing aid in the aftermath of the latest war on the Gaza Strip, yet who gets it and why may have little bearing on need 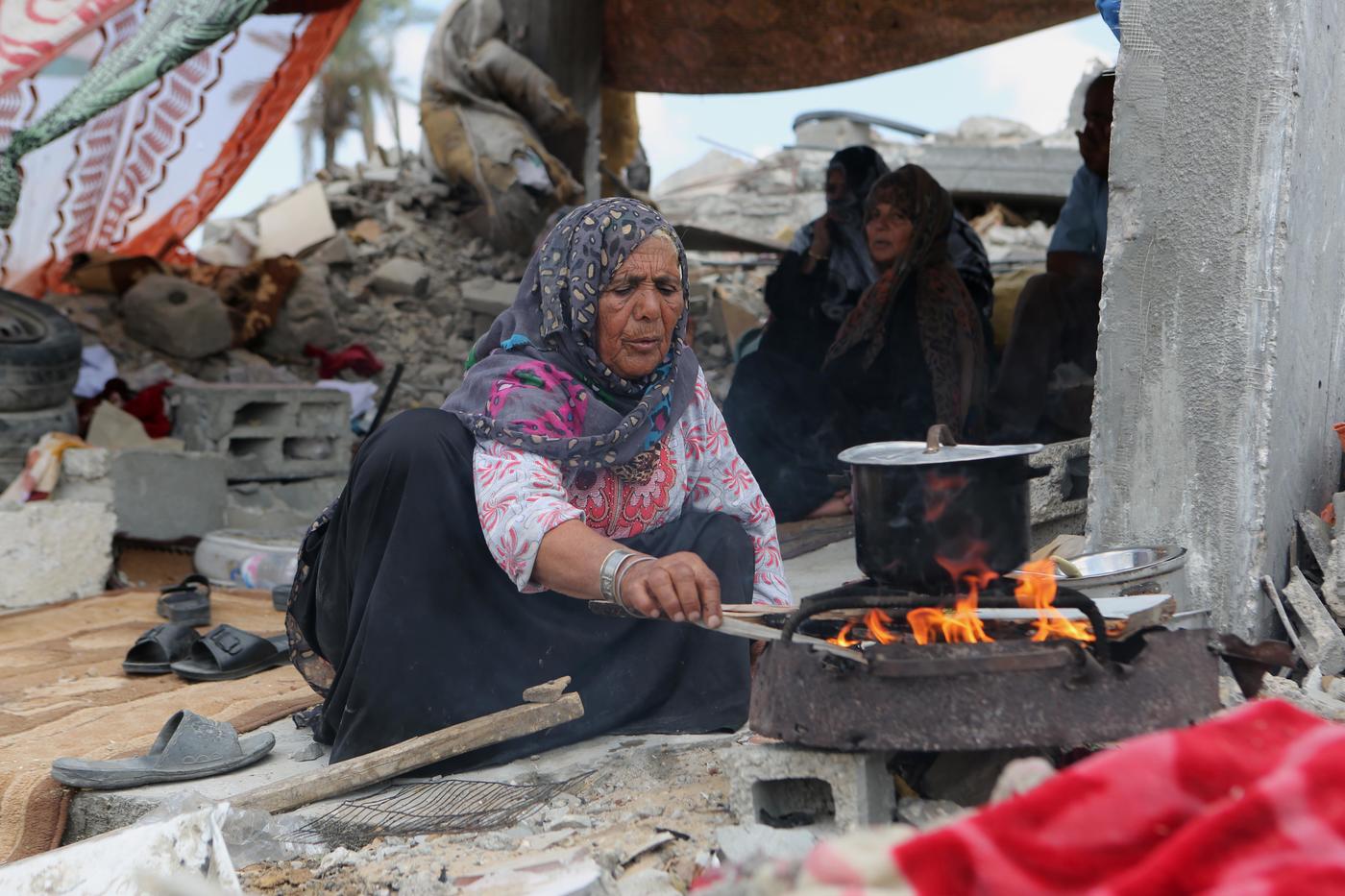 A Palestinian woman cooks amid the rubble of her house which was destroyed by Israeli strikes (AFP)
By
Mohammed Omer
The outside of a UN school in Tal el-Hawwa, west Gaza City, has turned into a mini-market, where vendors selling goods to homeless families seeking shelter inside UN schools must compete with some of those very families, who use the market in an effort to raise desperately needed cash.
Abu Khaled, 54, had a home in Gaza's Shejaiya district before Israel raided the area. Now homeless and destitute, he is deeply unhappy with how aid to those whose lives have been wrecked by the attack is being distributed. Many international NGOs arriving with aid to Gaza do not have a clear strategy, unlike the long-established UN Relief and Works Agency for Palestine Refugees (UNRWA).
"Our home was completely destroyed, and so far we have received nothing, while others have received many food coupons," he said. And unlike others in a similar plight, his dignity will not allow him to chase food trucks and beg for what he terms a basic right to survive.
The problem is there doesn't appear to be an overall system for aid distribution that would allow help to reach those most in need first. A lot of the operations now under way seem random, with many groups arriving to deliver aid, but with many people with the highest need remaining out of the aid loop.
One of those affected and expressing dissatisfaction is Hesham Saqallah, a 51-year-old disabled Gazan  whose home in Tal el-Hawwa's 12-storey Zafer Tower apartment building was destroyed by Israel's attacks. (For video of attack see below.)
"Distribution is based on personal connections and political affiliations," he said, indicating that some of his fellow homeless families received aid based only on the people they knew and their political loyalties.
Homeless families in Gaza also complain that they have not received good quality aid, some of which is either sold in local markets or given to people who did not lose their homes. This involves what locals have started to name as “VIP coupons”.
"There is even a VIP coupon, which I heard about from my fellow homeless families. This includes distribution of washing machines, refrigerators, dishes and other kitchen stuff," Saqallah said. He received nothing, because, he said, he is not affiliated with any political group.
"There is even discrimination in bedding which is handed out through donation: quality mattresses were donated by Kuwait, but only to those with connections, while ordinary people like us who need help the most get the poorest quality. Some of us get nothing."
Families in Gaza say that aid groups have failed to reach the most marginalized groups.
"There is not the minimum level of coordination between aid groups," Saqallah said. "Some organizations gave us the same food cans five and six times over. We don't need that, but there are other things that we do need." As a disabled man, he needs cash to get other basic goods, such as medication, washing detergent, and pay for transport to get his daughter to school.
When the war on Gaza stopped, Saqallah received $1,000 from Qatar, but he said that others with stronger political affiliations received noticeably more financial aid.
"Aid groups turn us into beggars without human dignity and minimal level of respect," he said as he paused for a moment while pushing his wheelchair.
After a month of war, Saqallah has had to separate his children and leave them with various relatives so that they have somewhere safe to shelter and sleep; he knows that a hard winter is coming, though it is a prospect that he does not want to contemplate.
It is not just food he needs, but in the absence of aids groups' appreciation for his needs as a disabled father, he doesn't know who to approach and feels abandoned.
Saqallah's clothes are all under the ruins of Zafer Tower; he has received some second-hand clothes, which make do but add to his sense of indignity.
"Each time I get the feeling of begging it makes me feel the terrible pain of being homeless once again," he said.

Mohammed al-Jamal, a member of the network Palestinian Human Rights Defenders, said aid distribution has been functioning on the basis of factional affiliation or going to those living close to NGO offices. Such distribution can leave many with hurt feelings, of being excluded.
"There is no doubt that aid distribution is factionalised, as in the case of eastern Rafah, which was very hard hit yet received no aid." Also, "the ones who remain at home with dignity get nothing".
Jamal does not see this as a deliberate attempt to marginalize, rather just laziness on the part of international NGOs preferring to give to those they know and who are close to them.
"Unjust distribution of aid is no new phenomenon, but now with massive aid coming, it is very apparent when one sees some families receiving eight times the amount of help, while families who lost homes and family members receive comparatively nothing."
It is difficult to know who is responsible for directly addressing this concern. Even assessments of the destruction caused by Israel is not accurate because many  homes that were partially damaged have not been not officially registered by the Palestinian Authority's aid groups.
Jamal says his house sustained damage, but he has not received even a bottle of fresh water since the war finished. He has friends in even more desperate need after sustaining greater damage, and they have so far also received no help.
"I know some of them would rather starve to death, than chase the food trucks around like beggars," he said.
Mouneer Khalil, 37, an unemployed Gazan whose home in Khirbet el Adas, on the edge of Rafah city, is still waiting for aid three weeks after Israel's latest war on Gaza. He wants to know why, but has his own ideas.
"International NGOs work in air-conditioned offices and are unwilling to go outside on to the streets, so they wait for people to arrive begging for help and seeking leftovers after factionalised aid has first been given out to affiliated members."
So, who is in charge to address the problem in which families who didn't flee their homes or sustain great damage still receive more than ample aid while others, more needy, go without, he wonders.
The disparity in distribution and obvious favoritism calls the reputation of aid groups into question.
"This aid should have been primarily for people who had to flee their homes and who sustained massive damage, and that includes myself" he said, as trucks of mattresses passed through to Gaza City.
Saqallah, in Gaza City, is much better off than many in more marginalised areas, but still he too says the work of relief agencies lacks coordination and organisation, even in the center where aid distribution takes place.
He had to share the extra food cans he received, and now can't afford to buy simple essentials.
"I wish we didn't have to receive aid, or be exposed to the problem of abuse of factionalised power in the unfair distribution," he said.