Five young guys from Gaza who started by making a YouTube show have built a huge audience, and now have a sketch show on Al-Araby TV 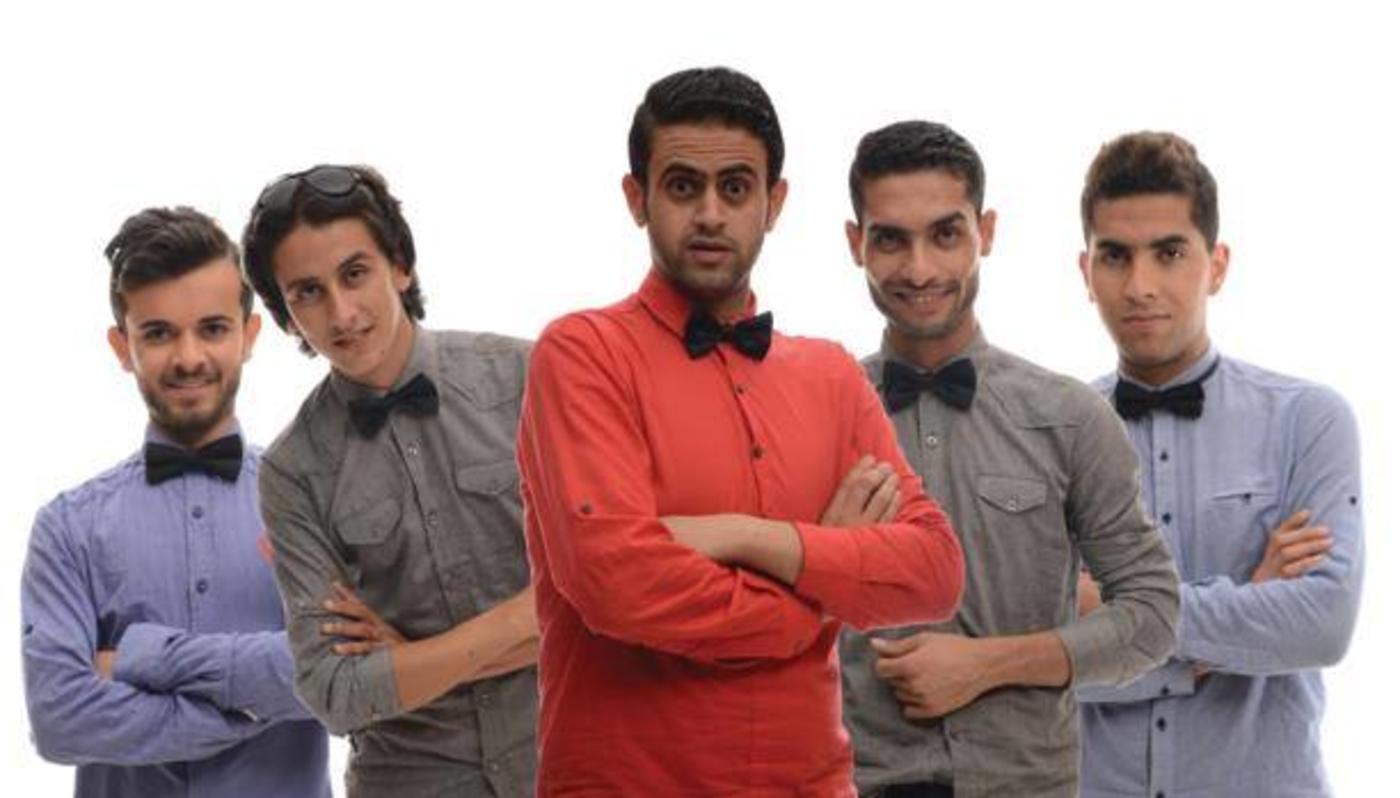 Bombs, blood, rubble and grief: that is how the world identifies Gaza today. Since the imposition of the Israeli siege on the Gaza Strip in 2007, the devastation in Gaza has indeed been immense. Not only have Gaza’s residents been subjected to frequent power cuts, fuel shortages, border closures, trade restrictions, and rising unemployment levels, but they have also endured three Israeli military campaigns that have left thousands of people dead, injured, distressed and homeless.

Some might find it difficult to believe that Comelogia, a weekly comic sketch that is part of a new programme aired on the London-based Al-Araby TV, is produced and filmed in Gaza. Satirical art, however, has long been a way for people to express their feelings in the face of adversities.

And so it is with Comelogia, created by five young men in Gaza who wanted to use stand-up comedy and satire to help their people laugh at Gaza’s challenging conditions, as well as to portray Palestinian reality and culture - and through this bring the stand-up art form into the Palestinian mainstream.

Before their recent appearance on Al-Araby TV, the group was best known for its stand-up comedy show Bas Ya Zalameh (Stop It, Man), which they launched in 2012 on YouTube. Social media has since been the group’s window to a world free of borders and restrictions, attracting over eight million views worldwide on their YouTube channels and over 100,000 fans on Facebook.

An idea is born

Thaer Moner, the director and producer, and Mahmoud Zuaiter, the main actor, first met at Al-Azhar University. Thaer has always been a fan of stand-up, and was the one who proposed the idea of creating a YouTube stand-up comedy show with his friend Mahmoud, with the goal of portraying Palestinian reality and culture and bringing stand-up into the Palestinian mainstream.

Expressing his frustration with the situation in Gaza and the high unemployment level amongst the youth in particular, Thaer explained the thinking behind his idea to Middle East Eye via Skype: “I wanted to draw a smile on people’s faces, and I wanted to address Gaza’s youth and show them that their talents should not be wasted.” He also said that stand-up comedy as an art form is rarely produced in Palestine, which made him determined to form a stand-up comedy team in Gaza.

The pair’s families were confused as to the nature and purpose of their initiative at first. Nevertheless, they supported them and helped them get started. Mahmoud’s family let them use an empty flat they owned as a studio, while Thaer’s family helped him buy necessary equipment, including a camera, light projectors and a sound system. Hesham Adnan, Ibrahim Khalil and Ahmed Assi later joined the team, forming a full production crew.

Addressing social and economic phenomena in Gaza, the group’s videos rapidly spread across various social media networks. Occasionally, they produced videos that reflected on the underlying humanitarian issues resulting from the siege on Gaza and the Israeli occupation of Palestine as a whole. One example is Mahmoud imitating Jean-Claude Van Damme's Volvo ad in a video that features cars being pushed rather than driven, emphasising Gaza’s fuel shortage problem.

A difficult but rewarding journey

Mahmoud’s family home was bombed during an Israeli attack, and he and Hashem also lost members of their families. Speaking about his loss, Mahmoud said he could not let any of that affect him. “We had to continue to live our lives, be positive and hopeful, and draw a smile on people’s faces.”

Message to Israel, an episode released during Operation Protective Edge in summer 2014 in Gaza, ridicules the three wars waged against the Strip within six years and the various aspects of the summer attack, from the infamous knock-on-the-roof Israeli "warning" missiles to the familiar F16 fighter jets.

The group faced several other obstacles stemming from the Israeli siege, such as difficulties in purchasing equipment and recurring power outages. “We had to pace our work according to the electricity schedule,” Thaer told MEE. “We carried out the shooting, montage, and upload as fast as we could during the hours of electricity we had."

“Our first episode was very weak and received a lot of negative comments,” Mahmoud added. “I was very reluctant at the start as to whether I should continue or not, but I am very glad we carried on.”

As their production improved and their videos gained popularity in Gaza and beyond, the team was approached by Palestinian TV asking them to produce 30 episodes of Bas Ya Zalameh to be aired during Ramadan, a time when families come together and watch TV. “It was rewarding to be watched on TV and reached by all groups in our society, not just the youth,” Mahmoud continued. He described funny incidents of people bumping into them on the streets of Gaza and asking to take photos with them.

Saddam Zourob is a Palestinian from Gaza living and working in London. Saddam, who has watched the group’s videos since he lived in the besieged territory, expressed his admiration for the group, saying they managed to overcome Gaza’s suffering in a way and bring a smile to people’s faces by criticising social phenomena. “With that”, he told MEE, “they are also sending a strong message of hope regardless of the lack of resources and the severity of the blockade, which affects all aspects of life in Gaza.”

Hesham, one of the actors, reflected on the group’s new production for Al-Araby TV, saying it was a milestone for them. “We are very enthusiastic about this new experience and hope to be able to break the stereotypes about Palestinian art, which is traditionally dominated by tragedy, and produce a show that tackles social issues from the perspective of the youth.”

The team has indeed been successful in reaching a wide and diverse Arab audience. Noura al-Dabbagh, a political science graduate from Iraq, has been following the group since their early beginnings. “I came across Mahmoud and Hesham’s videos on YouTube before they appeared on TV,” she told MEE.

“They continuously made me laugh, but what struck me the most was how similar I found the youth issues in Palestine to those in Iraq.” Noura, who frequently engages with the group’s Facebook posts and videos, also voiced her increasing understanding of and attachment to Gaza and Palestine after watching these videos online. “These guys showed me a side to Gaza which is different to the one we always see on TV, and they drew me closer to their experiences.”

Satire has increasingly become one of the most popular mediums for Palestinian youth in the Gaza Strip to express their daily struggles. Despite its countless calamities, these young comedians are but one example of Gaza’s unshakable will to live, to laugh and to break free from its long-standing isolation.