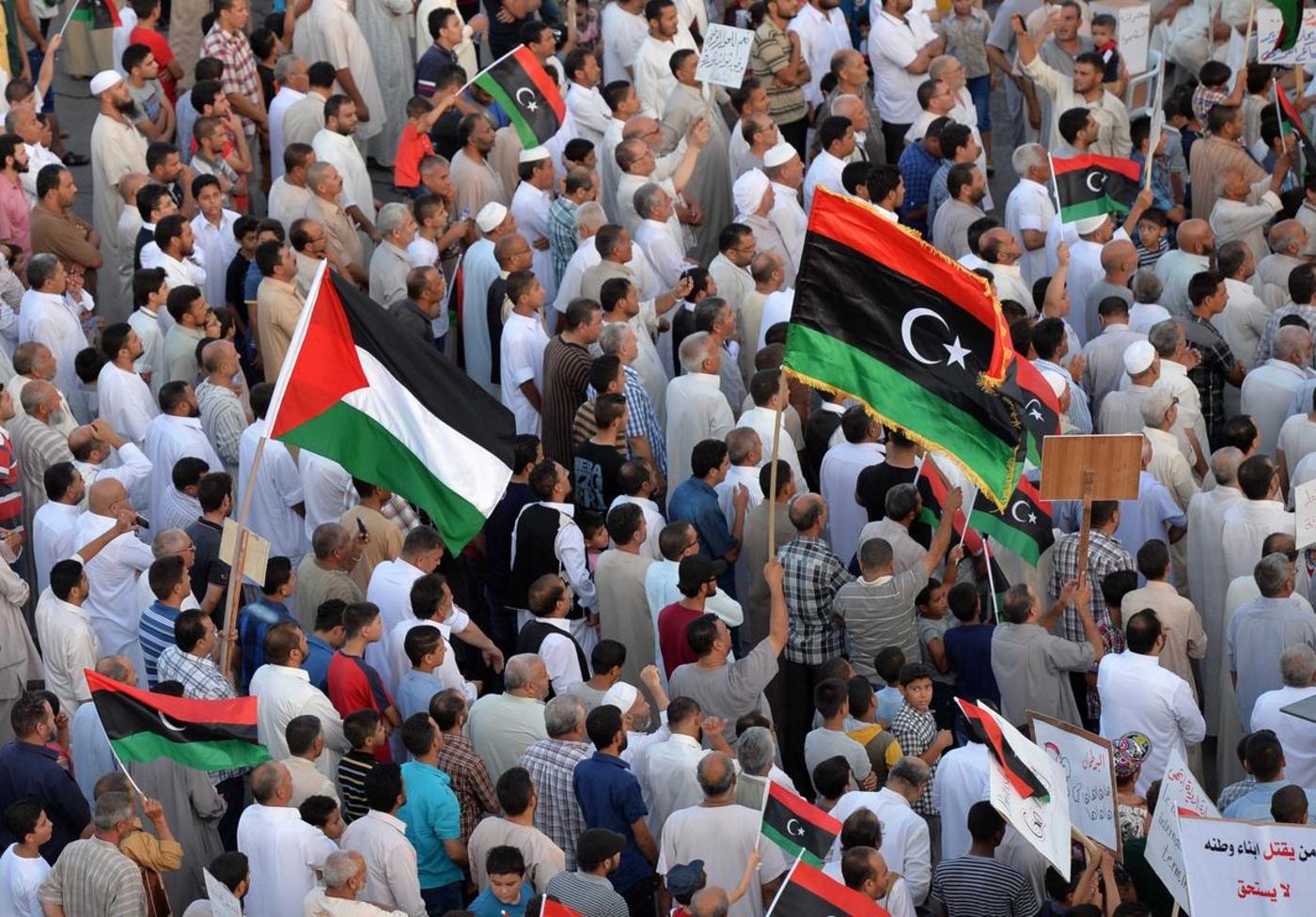 Thousands of Libyans gather in Misrata on 12 September, 2014 to express their support for the 2011 uprising and protest against pro-Haftar militants (AA)
By
Tom Stevenson

CAIRO – As two opposing governments emerge from the violence and chaos in Libya, the Arab Gulf states are competing for influence and using Egypt as a stepping stone.

An official delegation from Saudi Arabia arrived in Cairo on 7 September for high-level meetings with Egypt's military-backed president, Abdel Fattah al-Sisi, and Libya was at the top of the bill.

“The meeting addressed the situation in Libya and the need to support the elected Libyan parliament (the House of Representatives,) which is reflective of the popular will,” according to President Sisi's spokesman, Ambassador Ehab Badawy, who noted that other topics were also covered.

Rumours have proliferated of Gulf intervention in Libya after Sukhoi Su-24 aircraft (which the Libyan Air Force is no longer believed to operate) struck Misratan targets in Tripoli last month. Pentagon officials claimed UAE pilots flying out of Egyptian airbases were responsible.

Saudi Arabia, the United Arab Emirates, and the Egyptian intelligence service are all backing Libya's new elected parliament, the House of Representatives (HoR), and the anti-Islamist alliance that surrounds it, which they claim is the legitimate governing authority.

However, the HoR's relevance in Libya is dwindling.  As one of its first decisions, the HoR chose to relocate parliament even further away from Tripoli to Tobruq. Plans to hold parliament outside of the capital in Benghazi were orginally devised in March, but as Benghazi became too dangerous amid ongoing battles between retired General Khalifa Haftar and Sheikh Muhammed al-Zawahi's Islamist militia Ansar al-Sharia, saw members move operations to Tobruq, close to the Egyptian border.

“President Sisi stressed Egypt’s commitment to bringing about political stability and restoring security in Libya, so as to prevent it from sliding into the hands of terrorists, and reviewed Egypt’s efforts in this regard,” he said.

However, security is in short supply. A militia coalition from Misrata that is broadly supportive of Islamist political forces, including Libya's Muslim Brotherhood, have seized effective control of most of Tripoli and re-declared the previously disbanded parliament, the General National Congress, in the capital.

The Misratan forces were coordinated by a former GNC member named Saleh Badi, who was previously appointed head of military intelligence by the then Islamist-backed GNC speaker, Nuri Abu Sahmain, but whose nomination was spurned by high level military officers, some of whom have now joined General Hifter's forces in Benghazi.

A high-level meeting between Saudi officials, including the head of intelligence, and Egypt's president, foreign minister, and intelligence chief, further adds to the image that the Gulf States are attempting to stamp their authority on Libya from Egypt.

Links between the HoR and the Gulf have been growing. On 9 September the HoR-backed prime minister (who is opposed by the Tripoli based GNC's prime minister, Omar al-Hassi), along with the House speaker, Agila Saleh Issa, and the new nominal chief of staff of the army, Major-General Abdulrazzak Nazhuri, were received in Abu Dhabi for an official state visit.

General Nazhuri has also been travelling to Egypt, and on 27 August visited Cairo to meet with the chief of staff, former military intelligence head, and second in command of the Egyptian army, General Mahmoud Hegazy.

But the Gulf states are not united in their support for Libya's Tobruq-based government. Qatar is accused by the HoR of supporting the Islamist militias fighting against General Khalifa Haftar and of the Muslim Brotherhood in Libya.

Qatar funded the Islamist Tripoli Military Council (TMC), which is partly made up of former members of the Libyan Islamic Fighting Group (LIFG). In addition, the Qatari government has funded and backed the influential Rafallah al-Sahati militia, which has been fighting against General Khalifa Haftar in Benghazi.

Rafallah al-Sahati is currently headed by Mohamad al-Gharabi, a former inmate at the Abu Salim prison, well known as the site of a massacre by the Qadhafi regime in 1996. However the group was previously led by Ismail al-Sallabi, the brother of Qatar-based cleric Ali al-Sallabi, who facilitated Qatar's 2011 funding of Islamist forces in Libya.

As fighting continues, the death toll mounts. According to the independent monitoring group Libya Body Count more than 1,400 people have died violent deaths so far this year. The United Nations believes that 100,000 people have been internally displaced by violence and a further 150,000 have fled the country.

Meanwhile, in the eastern city of Derna, as many as three individuals (one of those an Egyptian national) have been publicly executed in a football stadium by a militant group known as the Shura Council of Islamic Youth.

In addition, in a report on 8 September, Human Rights Watch accused militias fighting in Tripoli of indiscriminate killing. “Militia forces battling for control of Tripoli and surrounding areas have engaged in attacks on civilians and civilian property that in some cases amount to war crimes,” the organisation said.

“Gulf involvement in Libya, while it goes back to 2011, has clearly escalated due to the splits in the state and General Hifter's campaign,” says Frederic Wehrey, a Senior Associate at the Carnegie Endowment's Middle East Programme with extensive experience in Libya.

“The Saudi position appears to be in lockstep with the UAE, who have the muscle in Libya and are competing for influence with Qatar by backing the various factions,” he told Middle East Eye.

“Libya is fertile ground for the Gulf to play these games, partly because the oil is valuable, and there's significant distance from their own territories, but also crucially because of the ability of the UAE and Saudi Arabia to use Egypt and its government right across the border.” 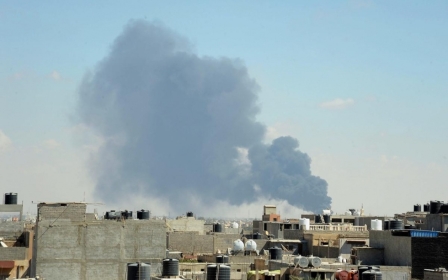 Libya Crisis
France urges action on crisis in Libya, a 'hub for terrorists'