For years, off-roading in the Qatari desert has drawn men from across the Gulf coast, yet the Qatar blockade broke the unity it once brought 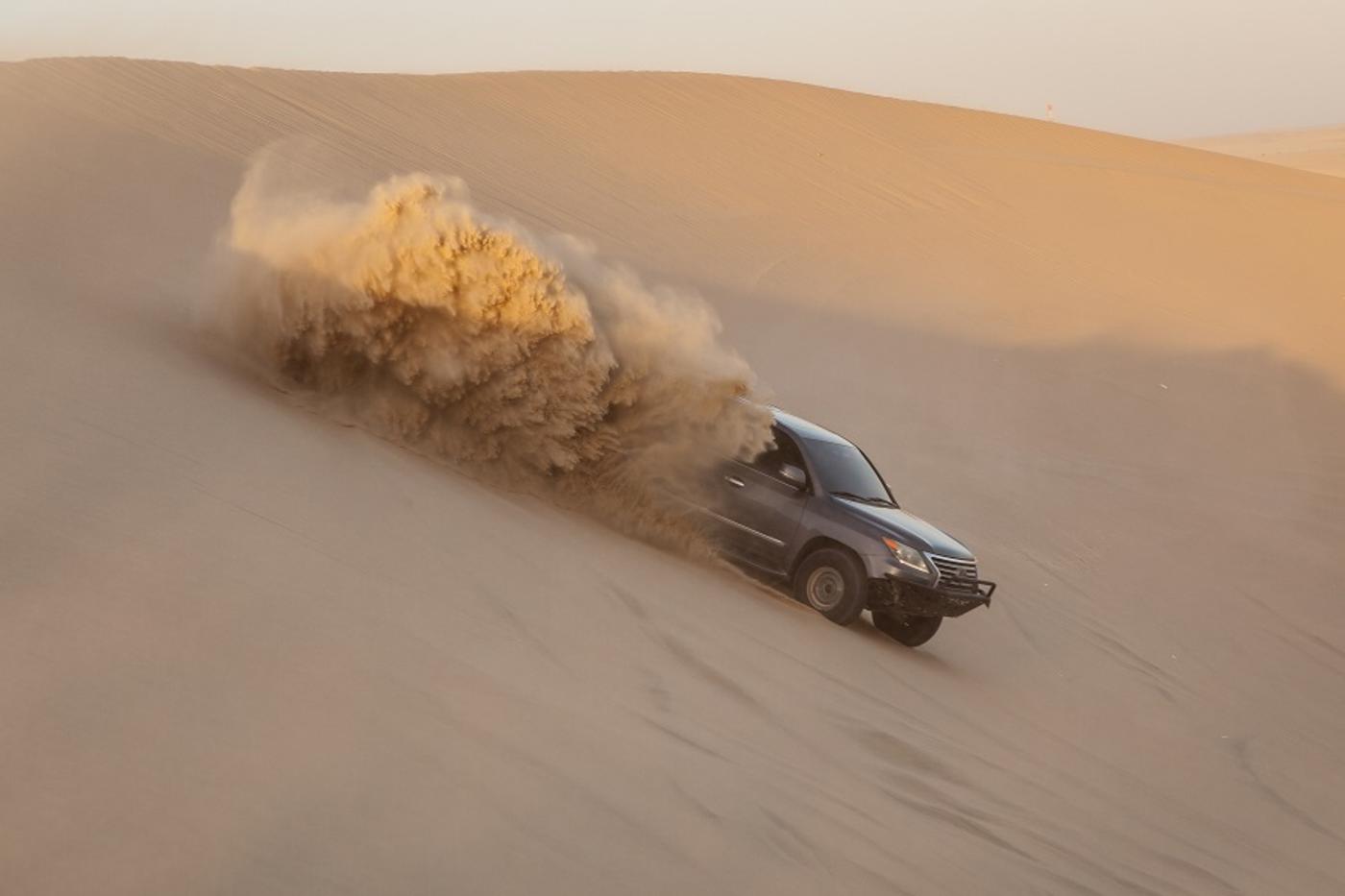 At sunset, a car is practising dune bashing in the sand dunes of Khor al-Adaid, Qatar (MEE/Sebastian Castelier)

DOHA - Clouds of sand rise behind two 4x4 vehicles as they plummet down a steep sand dune in Khor al-Adaid, or the Inland Sea, south of the country’s capital Doha. Their loud engines rev up at top speeds while they manoeuvre erratically in a zig-zag motion towards the next summit.

“Dune bashing is like a gift from God, and we feel good when we do it because there is lots of adrenalin,” Fahad, a 25-year-old science student at the University of Doha, told Middle East Eye.

According to Fahad, the success of the sport is all in how a driver follows the curves of the sand dunes.

He emphasised that the steering wheel has to keep moving. "If you maintain your steering wheel straight, you are quickly going to sink in the sand, lose speed, stop and your car is going to roll over,” he said.

Fahad points to a small dune in the distance where beginners can practice without fear that their cars will flip over. "But every year, there are always the same guys who come with turbo engines and the latest 4x4, but have no technique."

Dune bashing is a popular pastime in the Gulf region, especially on weekends.

The desert peninsula of Qatar is rich in sand dunes and it offers visitors an intense adrenaline rush, but leaping the majestic dunes at high speed can carry significant risks.

A minor accident took place a bit earlier when a car lost speed and then smoothly tumbled down the dune, but nobody was injured.

"They are crazy," says Khaled, a Qatari man in his fifties. Two cars carve impressions into the dune with two different trajectories.

"That's it, the most dangerous. A wrong move and you [can] collide [with] the other vehicle, above or below you. If I see my sons doing it, I’ll kill them," he said.

Wearing the traditional white, crisp dishdasha, Fahad confirmed that he has witnessed many minor accidents.

“I would say that every Friday there are between twenty and twenty five accidents," he said.

According to the Qatar Tourism Authority (QTA), “numerous accidents and near misses are reported each year,” some of them fatal.

In 2015, a Sri Lankan Airlines flight attendant was killed and three of her colleagues injured while on desert safari in Qatar.

If I see my sons doing it, I’ll kill them

According to media reports, the vehicle the group were travelling in flipped over during the safari.

In 2014, a Russian woman died and five people were seriously injured during a desert safari trip in Sharjah, in the United Arab Emirates. According to media reports, the driver crashed into a dune at high speed and the car flipped over several times before coming to a stop.

A few years ago, QTA announced that it was considering introducing new rules, which would raise safety standards for desert safaris, by including roll bars, first aid kits, radio equipment and attaching rigid “bull bars” to the front of the vehicle to protect those on board. But it is not clear whether these regulations have been implemented or not.

The overwhelming majority of people attending dune bashing events are normally between the ages of 20-35. They usually go a few times a month, but some attend more frequently.

Khalil sits on the roof of his 4x4, which he has enhanced by attaching a turbo engine to it. "You can have this done in Doha’s industrial area,” he said.

"You pay approximately 10,000QR ($2,700) and you get a turbo engine. It is not mandatory, but it facilitates mounting dunes and its loud noise stands out and makes you shine," Khalil said.

Before every desert journey, tires must be deflated just enough so adhesion to the sand increases.

Away from the dunes, dozens of on-lookers watch from their 4x4 vehicles parked on the sand.

Some Qatari men sit on the roofs of their cars, and others are seated on the ground or perched inside their spacious trunks. They have all come to watch the show.

Driving and performing well is a matter of pride for Qatari men. In the conservative Gulf country, women seem absent from this male-dominated activity. The spectators observe the successes and failures of the drivers, while drinking sodas, snacking on chips and cookies, or smoking cigarettes and shisha.

Ahmad, a Qatari business student, who visits the sand dunes every week, is watching the show with his friends when suddenly a car zooms past him and rockets up the dune.

Here is a way to forget your problems. Everybody comes for it

"Do not be scared," he said, while laughing and joking. "Here is a way to forget your problems. Everybody comes for it."

Only a few kilometres away, the "Inland Sea" separates Qatar and Saudi Arabia, reminding spectators of the worst rift in years among some of the most powerful states in the Arab world.

An air, sea and land blockade was imposed on Qatar on 5 June 2017 by Saudi Arabia and the UAE after severing all ties with Qatar, accusing it of supporting groups, including some backed by Iran "that aim to destabilise the region”. Egypt, Bahrain and other allies followed.

Qatar denies the allegations and says that the siege aims at neutering an independent foreign policy which promotes peaceful regional reform.

We don’t need Saudi Arabia to have fun

Bahraini, Saudis and Emiratis used to visit Qatar’s desert to enjoy the sight of its towering dunes and participate in off-roading during the weekends. But the size of the crowd has dwindled, following the blockade.

“Without family ties, our neighbours cannot come anymore due to the blockade," Ahmed, a 30-year-old who is a member of Qatar's army, said. "For the first days of the blockade, I was afraid of a war," he continued.

Even though Ahmed’s family was not impacted by the blockade, he knows that many other Qatari families were torn apart.

Human Rights Watch (HRW) issued a report in July stating that "the isolation of Qatar" has led to serious human rights violations, including separating families, interrupting medical care and education.

According to a separate report issued by Qatar's National Human Rights committee in July, the siege has split hundreds of families.

For the first days of the blockade, I was afraid of a war

Ahmed's wooden cane, which he uses in traditional dance, lays beside him, sunken in the sand. To him, whether or not Saudi Arabians attend the dune bashing show does not make a difference. He says he will not let regional politics spoil his fun.

"Saudi Arabia is in front of us, but I don’t care. We don’t need Saudi Arabia to have fun," he said. "Fortunately, all my family is here. Before, I used to go to Saudi Arabia for shopping. Now, I do not have the right to go there anymore."

“But life goes on. We have everything here," he added. 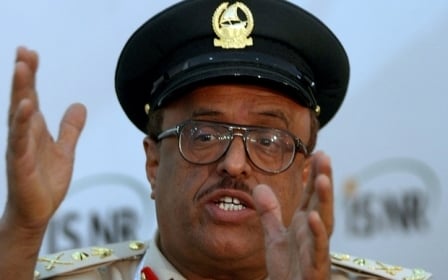