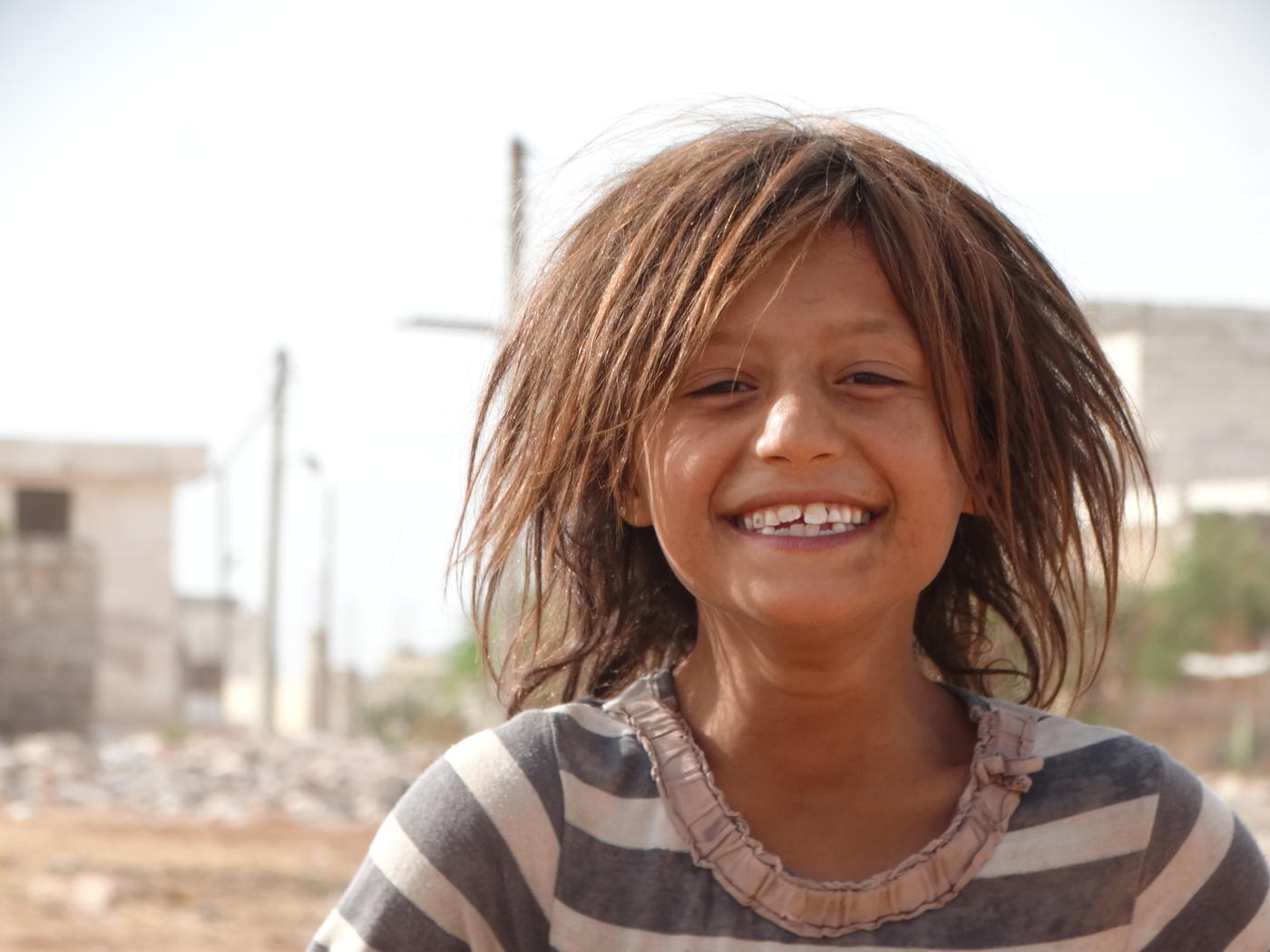 "This girl grazes sheep with her brothers to help her family. She has a beautiful smile and always asks me to photograph her whenever I run into her." Sakina, 7 years old (October 18, 2015) Saraqeb, Idlib countryside, Syria ((Courtesy of Laith Al Abdullah/Humans of Syria)
By
Wilson Fache

On 12 January, Dr Refaai Hamo, a 55-year-old refugee also affectionately known on social media as “The Scientist,” was invited to attend Barack Obama’s final State of The Union before a joint session of Congress.

It was a dramatic change of fortune for Hamo. Just a month before sitting with the First Lady, the doctor was part of the unnamed mass, those millions of anonymous Syrians whose lives collapsed as the fate of their country was sealed in blood and dust.

It all began when Brandon Stanton, the photographer behind the world-famous “Humans of New York” website and Facebook page, shared Hamo’s story with his 16 million online fans.

Dr Hamo fled Syria after a bomb tore through his home, killing seven family members, including his wife and one daughter. “My son had to carry the pieces of his mother and sister out of the house. He was 14 at the time. He was so smart. He was the top of his class. He's not the same,” the doctor told Stanton.

The photographer met Hamo in Istanbul as part of a photo project he called “The Syrian Americans,” which aimed to shed light on the story of Syrian families in exile in Turkey and Jordan. Over the course of two weeks, Stanton shared with his audience the pictures and stories of these refugees who had been selected for resettlement in the US.

“People the least able to tell their stories but who need to the most are refugees,” Stanton told Middle East Eye.

In Turkey, where he fled with his family, Hamo was later diagnosed with stomach cancer but couldn’t afford medical treatment. “I have a PhD but I’m not allowed to work without a residence permit. There is a university here that is teaching with a book I wrote, but still won’t give me a job,” he said.

Mourning, bankrupt and sick, the doctor had nothing left except for hope. “I still think I have a chance to make a difference in the world. I have several inventions that I’m hoping to patent once I get to America,” he added.

With just a handful of pictures along with quotes, Stanton succeeded where most mainstream media had often failed: to spark empathy for Syrians, not as a cursed nation, but as individuals with stories worth revealing. Instantly, tens of thousands of people liked, shared and commented on Hamo’s story. And one of them happened to be the President of the United States.

“As a husband and a father, I cannot even begin to imagine the loss you’ve endured. You and your family are an inspiration,” Barack Obama commented on Facebook.

Dr Hamo moved to the state of Michigan in mid-December with his four children. “You can still make a difference in the world, and we’re proud that you’ll pursue your dreams here,” the president added. “Welcome to your new home. You’re part of what makes America great.”

“When I started Humans of New York, it was about [telling the stories of] strangers in the streets… Then, I realised I could go beyond the city,” Stanton said. Since he began to take pictures of random pedestrians in the streets of New York in 2011, he repeatedly left the city and even started travelling overseas to visit countries such as Iran and Pakistan, places rarely frequented by Americans.

In collaboration with the UN, Stanton also travelled to Iraq and Jordan in August 2014 where he had already had the opportunity to meet Syrian families who had to flee.

“I have a lot of experience with refugees,” he said. With a camera and his pen, the photographer kept doing abroad what he used to do in Manhattan, sharing the newsworthy stories of ordinary people in an effort to break stereotypes. “The formula enables people to hear stories that otherwise they could not get,” Stanton said.

It’s with the same formula in mind that a dozen Syrian photographers decided to create a Facebook page directly inspired by Humans of New York.

Since Humans of New York’s astonishing success, thousands of similar projects flourished around the world, from Rio de Janeiro to Bombay. Perhaps the most captivating, and also the saddest, is the one named “Humans of Syria” (HOS).

A bearded man wearing a dark red shirt stands on a pile of rubble. “You wouldn't believe it, but exactly a half-hour ago my house was standing here,” Abu Ahmed said, looking at what used to be his bed before an air strike destroyed his home. “Now, this is all that's left.”

The picture, taken last winter in Douma, Eastern Ghouta - a rebel-held region on the outskirts of Damascus - is part of a long series of stories published since 14 March, 2015, the fourth anniversary of the Syrian uprising. The photographers, mostly professionals working for major new agencies such as Reuters and AFP, had a simple goal when they first started the project: showing what life is like for the “humans” still living in war-torn Syria.

“We had been looking at the page Humans of New York for about three years, and it’s interesting to be reminded that there are humans living in that city, but I think Syria is the one place on earth where it needs to be reiterated and emphasised that those you hear news about are actual people, individuals with value.” Sayeed al-Batal, a 28-year-old photographer who co-founded Humans of Syria, told MEE.

In almost five years, the conflict in Syria has claimed at least 260,000 lives and forced more than four million Syrians to flee their country. Millions more have been displaced inside Syria.

The members of Humans of Syria - all volunteers - believed that the population trapped in the conflict, behind these abstract numbers, deserved better coverage. “The people became statistics and nothing more than news reports you would come across every day,” said al-Batal, who doesn't use his real name for security reasons.

“Behind each picture there is a story of a person with dreams and hopes just like you, whoever you are,” he added.

Today, more than 50 people collaborate in the project, including designers, editors and translators. First published in just English and Arabic, the quotes and captions that come with the pictures now also appear in French to attract a wider audience. The initiative aims to cover more ground as well and to include new photographers from different cities. “We hope we’ll able to cover the entire country, even the regions held by the regime,” Marvin, the 25-year-old collective’s coordinator, told MEE.

Marvin, who uses a pseudonym, said that even inside Syria most people don’t get this kind of information, as the country is now utterly fragmented and some areas have no access to the outside world. Eastern Ghouta in particular, where most HOS photographers work, has been continuously besieged by Syrian government forces since 2013, becoming what Sayeed al-Batal describes as a “desert island”.

“Most people here don’t have electricity, they don’t have the internet. It’s a privilege that I am talking to you now,” he said over a crackling Skype call.

Besides the danger of reporting in a country where “death has become something so familiar,” as al-Batal puts it, the photographers’ greatest challenge was perhaps to find a silver lining. “Everyone knows the situation is hard, so we try to focus on the positive,” Marvin said.

This summer, they published a series about the Syrian Civil Defence, also called the “White Helmets,” a group of unarmed volunteers working in search and rescue in areas where public services no longer exist.

In Aleppo, one of the photographers met a young boy who built his “dream city”.

With paper, glue, and a lot of imagination, Mohammed Qutaish created the scale model of a city that contains all the key sites of his hometown, HOS writes. It ranges from the Old City to the Citadel and the ancient houses, but also includes world-famous buildings like the Burj al-Arab and Burj al-Khalifa towers of Dubai, and the Kingdom Tower in Saudi Arabia, which Mohammed made with a bottle opener.

Far from the battlefields, his dream of a conflict-free world was part of an exhibition his father had opened in the neighbourhood. “Beautiful work Mohammed, never stop imagining...” one Facebook user commented.

Thanks to the Facebook page and its 13,000 fans, the collective tries, when possible, to connect people featured in their stories with those online asking if they can help. The publications on Humans of New York in particular were received with astonishing support.

Two fundraisers were immediately started to help Dr Refaai Hamo. One was set up by a Michigan resident and the other by American actor and producer Edward Norton, who said he was “moved to tears” by the story of this scientist diagnosed with cancer. He raised more than $450,000.

On Christmas Eve, Brandon Stanton also initiated a crowdfunding campaign in favour of the 11 Syrian families he profiled. More than $750,000 was collected in just 22 days.

According to Stanton, Dr Hamo recently underwent surgery to have a tumour removed from his stomach. It was benign.