Iraqi Christians flee IS to find refuge inside Jordan churches

Jordan has taken in thousands of Iraqi Christians, but almost all say they are desperate to leave the Middle East once and for all 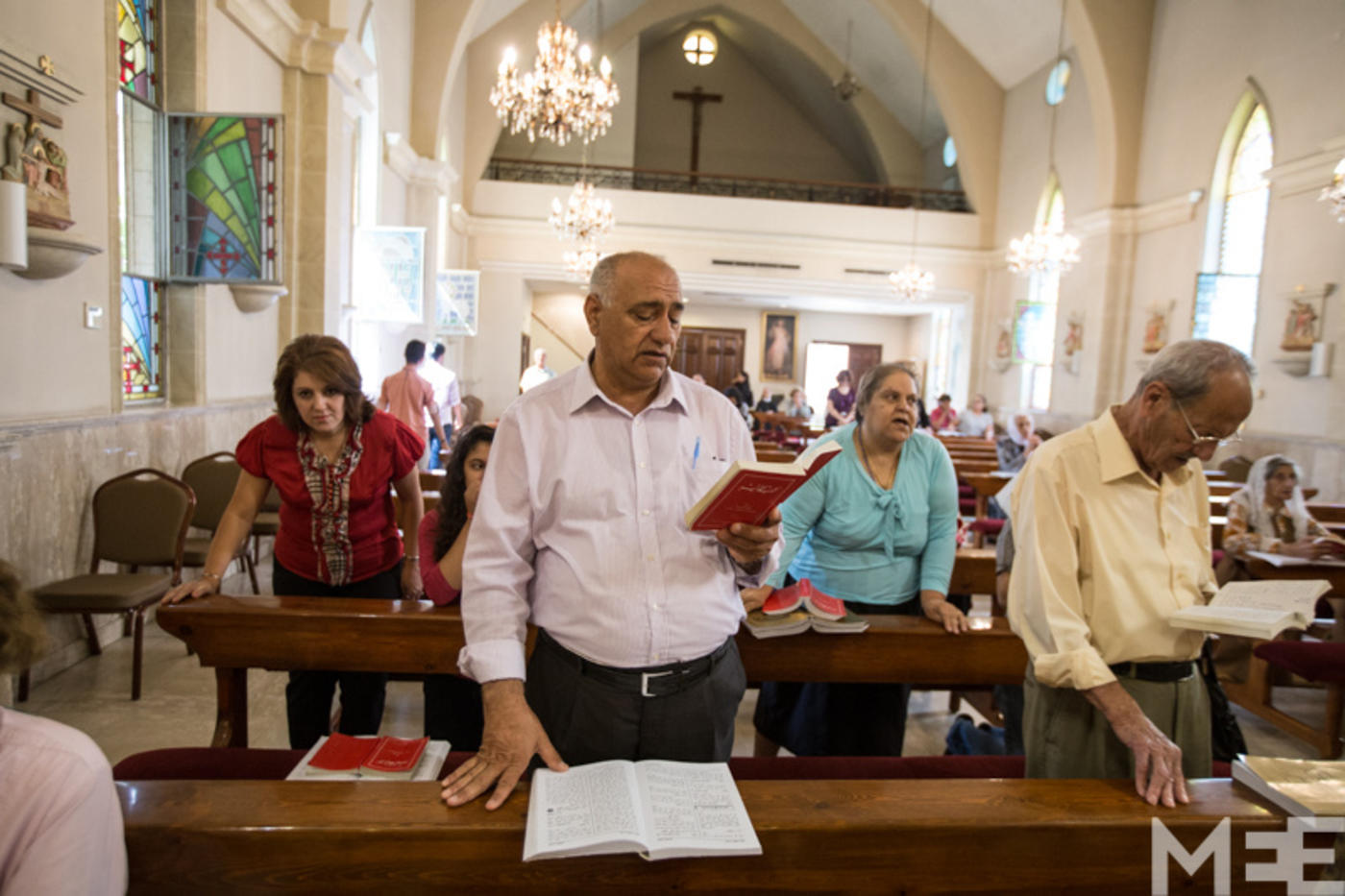 Samir Attala participates in Sunday mass at St Joseph Catholic Church. The cathedral is adjacent to the hall doubling up as the refugee living quarters. (MEE / Kelly Lunde)
By
Sheren Khalel

AMMAN - Suad Shamoon, 63, holds up a sleek magazine with the American flag emblazoned on the cover. She smiles and beams with excitement, despite the fact that she’s lost everything.

Shamoon sits on a small twin bed in a tiny makeshift room she shares with another elderly woman. While her current situation is far from ideal - she lives with 80 others in a church hall a thousand miles away from home - the prospects of a future in America keep her hopes high.

Shamoon, a refugee from Iraq, came to Jordan under invitation from King Abdullah II of Jordan, along with 1,000 other Iraqi Christians – all of whom live in churches across the country – mostly in the capital city of Amman.

“I can’t say how thankful we are to be here in Jordan,” Shamoon told Middle East Eye from her small room, where every wall depicts photos and posters of Jesus and other Christian icons. “Jordan has become our country now. For now Jordan is my life, but I will be with my sons in America soon.”

Like millions of others across the Middle East, the Christians at Saint Joseph’s Church fled their homes in Iraq when the Islamic State took over their cities. Most of them fled with little more than the clothes on their backs, and found their way to the Kurdish Autonomous Region in northern Iraq. While the Kurdish region offered relative safety, the Christians here at Saint Joseph’s repeat sentiments shared by Christians throughout Iraq – the Middle East is no longer a safe place for them.

While Jordan still lies in the Middle East, the Christians at Saint Joseph’s see the move as one step on their way out of the region.

Despite the difficulties of leaving behind the only home she’s ever known, Shamoon says she didn’t think twice about the offer to come to Jordan. To her, the further she can get away from the Islamic State group militants, the better.

“I don’t regret anything, I am very happy to be out of Iraq, but I really miss my daughters. My daughters are married and they decided to stay in Ankawa [an Assyrian district of Erbil in the Kurdish region], I left them there when I came to Jordan,” Shamoon said. “That was very hard.”

Saint Joseph’s began preparations for the arrival of the refugees last year, when the decision to relocate was announced by one of the leading priests in Jordan. The reception hall of the church, usually used for weddings and holiday celebrations was repurposed and lined with particle-board to create small rooms, just large enough to fit two twin beds.

Caritas, an international Christian charity working to “insure refugees are treated with dignity,” took charge of the coordination between the refugees, aid agencies and the 14 churches housing the Iraqi Christians in Jordan, the Caritas director at Saint Jospeh’s Majid Bagaen told MEE.

“The refugees here have everything they could need,” Bagaen said. “We take care of everything for them, we even give them a small [amount of] pocket money for other things.”

The sound of laughter

Saint Joseph's is an exception to the usual bleak atmosphere most refugee encampments tend to exude. Instead of despondence, the church halls burst with laughter, community and high hopes.

The women at Saint Joseph's take turns cooking for the entire encampment in the medium-sized kitchen, dishing out aromatic bowls of red beans and meat with white rice and salad. "There’s plenty of food", one of today’s chefs says laughing, insisting that anyone who enters the kitchen has good taste.

Men play dominos, in the common space of the hall, slapping their hands loudly on the table and bursting with laughter. Children of all ages weave in and out of the adults, cared for by the entire newly formed community.

Like Shamoon, most of the refugees at Saint Joseph’s seem to have a daughter, son or sibling they plan to join in America, the UK, Europe or Australia.

“I am just waiting on the final paperwork to come through and I’ll be on my way to my sons in Minnesota,” Shamoon said smiling. “They send me photos of America every day.”

Shamoon keeps all her paperwork in one bulging folder, and happily goes through the stash carefully explaining the importance of each one. She hopes in just a few months she will begin a new life in the United States, far from the strife that displaced her.

Shamoon's roommate, Hinda Korgis, 67, is one of the few at Saint Joseph’s who doesn’t seem to break out in excitement at the mention of a future life in Jordan or elsewhere.

All of Korgis’s children moved to Europe years ago. But she and her husband decided to stay behind in Mosul, Iraq’s second-largest city, which until recently had a small but vibrant Christian community. Then IS struck, however, and now Korgis is all alone. She says her husband couldn’t handle the stress of the displacement and died before the couple was able to make the move to Jordan.

Today Korgis says she feels totally alone in the Middle East. She has a few cousins left in Iraq but not any close family she feels she could go and live with and feel at home. All Korgis wishes for now is to join her children in Sweden, but her request for a visa was denied.

“They stamped my passport, a big stamp that says I was denied, I don’t know why. I don’t understand it,” Korgis said, unable to continue as tears well up in her eyes.

Korgis has no idea what she will do now. She is unsure of where she should settle now that she’s left Iraq and is in Jordan all alone with few options ahead of her.

Like Korgis, Samir Attala, 57, is unsure of where he will go from here. While he says he likes Jordan, he continues to apply for visas abroad.

Attala has no family outside of Iraq, but he believes the only way to insure his children have a future is to get them out of the Middle East, and soon.

“Any country they send me to I am ready to go,” Attala tells MEE with a big smile, slapping both palms on the table as if to imply he is literally ready to leave at that moment. “The first to say yes, we will go.”

While Attala has yet to be accepted to any one particular country, he says he has his heart set on Australia, and is confident him and his family will be approved for a visa soon.