As the war-ravaged country faces another crisis, women use beauty treatments to escape harsh realities of life 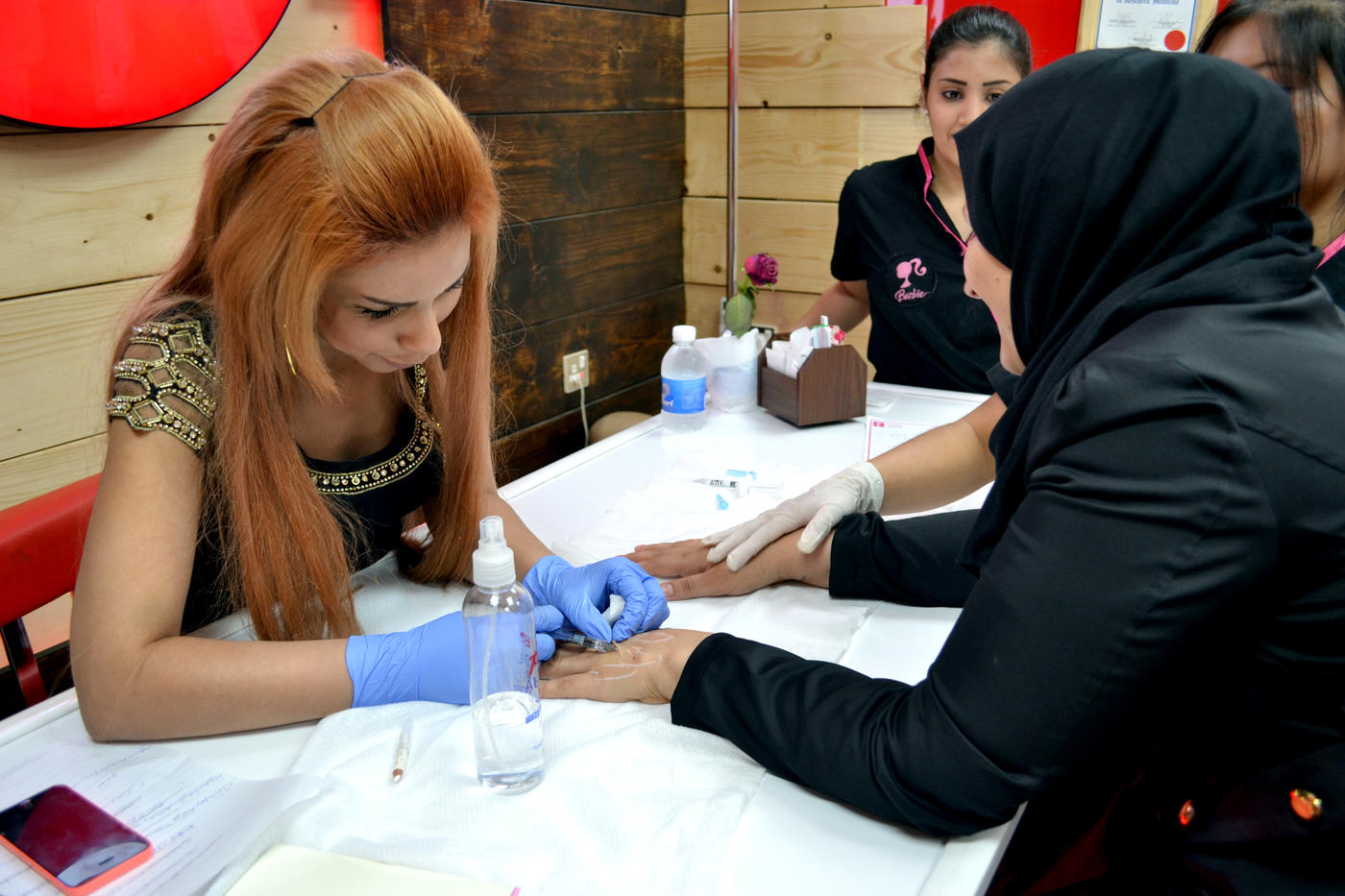 It was only a year ago that the trained plastic surgeon decided to open up her own place, where Iraqi women could come and enjoy a wide range of beauty treatments, but word spread fast and the clinic already has about 3,000 clients. The complex’s glitzy interior, which is spread over three floors and boasts an impressive collection of beauty technology, stands testament to Barbie Clinic’s popularity.

While most businesses in the country have been hard-hit by the wave of turbulence that erupted last summer and saw forces led by Islamic State militants sweep through large swathes of Iraq, Yusri says she has been able to prosper and grow as demand for her all-inclusive beauty treatments has swelled.

“Life in Iraq is tough. It is too difficult. More than elsewhere women need a place to escape from reality,” Yusri told Middle East Eye, as she injected a client’s hands with Botox, with apparent ease.

“Since IS began to threaten our country, my clientele has doubled.”

At $200 for a face-wide Botox treatment, Yusri says her prices are reasonable, despite income per capita in Iraq averaging around $2,500 according to the World Bank.

The clinic’s manager, Rabha Hamid, mans the desk of the enormous waiting room along with her busy and loyal staff.

The complex has a clean but somehow melancholy atmosphere, its gleaming doors and sleek polished floors reflecting a scene from a Stanley Kubrick movie, but this doesn't seem to discourage dozens of veiled women from waiting their turn here day after day.

They come in for a range of operations, from the relatively minor, like injecting lip fillers, to the drastic, such as facelift or liposuction, but almost all seem very eager to go under the knife and be ushered through the clinic’s black shiny doors by the staff who all don pink medical outfits. 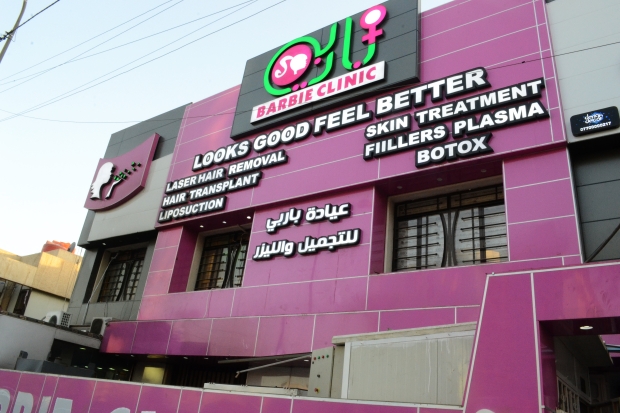 An escape from Iraq's troubles

“The last few months it has been extremely busy,” said Hamid. “It’s always like that when somewhere in the country the situation is becoming tenser. The clinic has become an escape for many women.”

Aoutif Ahmed, a 40-year-old Arabic teacher, is one of Barbie Clinic’s regulars. She eagerly waits to have her eighth surgery, but dark circles surround her eyes and the sallow skin of her face reveal that life has been tough on her.

She first came to see Dr Yusri shortly after her son died in a suicide attack in central Baghdad.

“I want to be young again. I wish to return to the good old days, when the streets of Baghdad were still a safe place,” Aoutif said while joking that she was about to celebrate her 12th birthday.

“Iraqi women need good care. It’s not only our minds, but also our bodies are that are stressed,” Aoutif said.

Before being toppled by a US-led invasion in 2003, former president Saddam Hussein ruled with an iron fist but at least during his rule, Aoutif says, women were allowed more freedoms and played a more active part in public life. These days, however, women are rarely seen or heard, sometimes not even daring to venture into the streets to buy food or go to work.

It’s this vast disparity that Aoutif explains long ago made her grow nostalgic about the pre-invasion period of life under Saddam.

“We can’t bring back society to those times, but we can bring back our old selves,” Aoutif said proudly. “Thank God we have Dr Afif.”

“The problem aren’t the wrinkles in the face, but the bursts in their soul. These women are looking for a bit of comfort. Some peace of mind,” said Aoutif.

Aoutif is far from the only customer who expresses this desire to use plastic surgery operations offered at Barbie Clinic as a way to escape from the harsh reality around them.

“You can compare the clinic with a spa, where women can find a bit of rest for a while,” Hamid said.

It’s a feeling the 30-year-old knows all too well.

Before she started working at Barbie Clinic almost a year ago, Rabha was a customer of Dr Yusri’s.

'We can't fulfil our dreams'

“For me it is psychological. In the West one can go out for a coffee with the girls, or you can go to the movies. In Iraq it is almost impossible to leave the house. People are dying here in the streets on a daily basis,” Hamid said, her eyes distant and deep in thought.

“Partially it is boredom as well. We have internet and television, we can see everything that a Western woman sees and thus we have the same dreams. But we can’t fulfil our dreams. This - the Botox, the liposuction – are the few simple things we can control.”

The clinic clearly recognises this need, as its slogan, “looks good, feel better” illustrates, meaning that Barbie Clinic’s staff more often than not have to double up as therapists, while the officer’s leopard-print benches act as makeshift therapy couches.

“These women come to me to talk to me,” said Dr Yusri. “A visit to a psychologist is taboo, because everyone has lost a husband, a brother or a child in this war.”

In Baghdad there are no more than four psychiatrists registered and no psychologists. This means that for Iraqis who want to talk to someone about trauma and loss, only the psychiatric path is open, which often leads to the patients being prescribed medications that can have a rather drastic impact on mood, metabolism and bring a host of side effects.

Most women say they would prefer a psychological route, which is more therapy-based, but the total absence of trained practitioners means that those who want to talk about trauma and loss end up having to go down the psychiatric route.

Dr Hafed Farhan, one of Baghdad’s four psychiatrists, says that the gap in the kinds of treatment available is all too evident.

According to Farhan, who lectures at the University of Baghdad, seeking professional help continues to be a huge taboo, something which is wreaking a heavy toll on the traumatised Iraqi population.

The rising need to have plastic surgery could be just one of those consequences.

“Iraqis have witnessed horrific scenes. The most insurmountable things have become rife here in Iraq and every individual is grieving for someone,” Dr Farhan said.

“When someone loses his or her child - that should be something exceptional, it deviates from the norm and the sorrow that comes with it is carried by the community. But when your sorrows are no longer exceptional, when your losses have become the norm for everyone, then there is no place for you to share your sadness. That is what is happening here.”

“People can no longer mourn for their children. And it even gets worse - people start to believe that they do not have a good reason to be sad,” he said. A way to release the pain

Undergoing painful medical procedures can therefore allow an avenue for the psychological pain felt by many. It’s a phenomenon that is not unique to Iraq alone, with Lebanon for instance experiencing a huge and well-documented plastic surgery boom in the wake of its brutal civil war.

“The pain is an excuse to let their tears run freely,” said Dr Yusri. “The things that happen here in Iraq take their toll.

“Many of our clients mainly want to vent. Before we inject them, we talk with them as long as is needed,” Yusri added, as she saw to another patient, drawing white lines of chalk calmly on her face in preparation for a heavy Botox session.

“The more chaos, the more people come to this clinic. We make these women more beautiful on the outside, so they can feel better from the inside,” said Dr Yusri.

Aoutif waited for much the day to get her lips done, but when her wait is over and the procedure is completed, she makes her way back to the waiting room.

“And? What do you think?” she asks Hamid as she points at her freshly injected lips. In her eyes the pain, of a woman who is clearly still emotionally scarred, is visible through the veil.

“Magnificent,” Hamid said as Aoutif prepares walk out of the bright clinic back into the street outside. 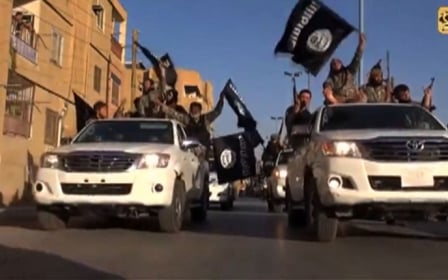