ISTANBUL, Turkey – Ibrahim Dereci emanates pride as he flickers on his prayer beads. Immaculately dressed in a suit and tie, he is a throwback to a different era.

The 62-year-old runs his patisserie in Istanbul’s Fatih district, while also keeping an eye on his neighbourhood from the well-located shop which has been around the area for four decades.

Although this is central Istanbul in the old city, one could mistakenly think the pastry shop was in Aleppo or Damascus, as the dominant language spoken in the area is Arabic, with most shop signs written in Arabic as well.

Istanbul has always been a magnet for migrants and those seeking refuge both from within Turkey and from the wider region.

The city has always lured them with the promise of work, prosperity and cosmopolitanism. Often the first destination for these migrants is Fatih.

The relatively low-cost district has been called home by people from many countries, with each new wave of migrants almost always slightly transforming the fabric of the district until the next group comes along.

Over the last few years it has been the Syrians that are leaving their imprint on Fatih. Dereci has witnessed quite a few of these changes ever since his family moved to Fatih from the Black Sea region of Rize in Turkey, and set up their patisserie in 1965.

“Forty years ago this was a rich neighbourhood. Even [major and famous Turkish foodstuff corporation] Ulker had a factory here. The Turks eventually moved out though,” he said in an interview with Middle East Eye.

“As the area became poorer and the Turks got richer, they moved to other parts of the city with gated residential compounds," he added.

Dereci has seen people from Afghanistan and various former Soviet Central Asian Turkic states move in and out of Fatih over the decades, each bringing a bit of their culture and a specific set of problems.

He said that 80 percent of the area is now populated by Syrians, who he deliberately refers to as guests.

'How could anyone with a conscience sit around with a full stomach while their neighbour has to go hungry? It is our duty to help'

This has meant a surge in businesses catering to Syrian demands and tastes, including Syrian eateries that have dominated the area.

Like a vast majority of Turks, Dereci remains a firm believer in the supremacy of Turkish cuisine, although he has employed ten Syrians to his staff.

“The restaurants here are now almost all Syrian. It is all these sauces. Everything has lots of sauce. That’s not for us,” said Dereci.

He admitted that traces of Turkish culture are now at a minimum in parts of Fatih, but said that it was nothing to be concerned about.

“This area has seen many people stay and move on over the centuries, but it has always maintained its Turkish identity.”

For 32-year-old Syrian Alaa al-Sabbagh, who came to Istanbul a year ago and now co-owns a perfumery with a Turkish business partner in Fatih, the language barrier has been an important obstacle to overcome.

“When I first arrived, I only spoke a few words in Turkish,” he said, adding that people treated him as if he were a stranger.

“Now, about 20 percent of my conversations are in Turkish. I want to keep learning to become a proper citizen," he said.

Despite the challenges, Sabbagh found it relatively easy to adapt to his new home and said that he fitted in quite easily.

“I don’t feel like a stranger at all. Even if I don't speak Turkish well, I can get by speaking Arabic most of the time," he said. "The way of life, the food and the culture is all very much like what I was used to back in Damascus."

'The way of life, the food and the culture is all very much like what I was used to back in Damascus'

He feels that learning the language will help him expand his business so that he can apply for citizenship one day.

Although most of Sabbagh's customers are Arab, he has been experimenting with new scents to attract a more Turkish clientele.

He said that he was thankful to the Turkish government for facilitating many things for him.

"I really like this government and feel that if one day I have the right to vote, I would definitely choose Erdogan as my president," he said.

Not always a utopia

Although Fatih is no stranger to migrants, this round of migration has left some of its original residents slightly unsettled by the rapid change to their neighbourhood.

Despite being a migrant herself, 73-year-old Ayse Ergun, who came to Fatih from Bulgaria with her family as a three-year-old in the 1940s, feels that the recent influx of Syrian migrants has created too much change.

“It kind of bothers me, not because I dislike them [the Syrian migrants]; they are our brothers and sisters and I would always help them, but the place has changed and I can’t say I like that change," Ergun told MEE.

As she carried her shopping bag through Fatih's central marketplace known as Malta, Ergun said: “For 60 years I’ve done my grocery shopping here. I used to know every corner of the market."

"I now hear more Arabic than Turkish, I see different foods and come across unfamiliar smells. I feel like a stranger in my own home.”

'I now hear more Arabic than Turkish, I see different foods and come across unfamiliar smells. I feel like a stranger in my own home'

Largely unaware of the government's political decisions and its military offensive in northern Syria, news of the rising number of young Turkish soldiers dying in Syria is also causing anger and resentment against the Syrian community.

“This is unacceptable. These Syrians walk around smiling, laughing and disturbing people while their country is at war. I would never behave like that if my country was at war,” said Hakan Gulmez, 41, who runs a grocery store in Fatih.

Gulmez, a Turkish Kurd who moved to Istanbul from Sirte in 1994 and started his business 10 years ago, said that the Syrians are so loud and disruptive.

He suggested that the solution lies in keeping all Syrians in camps only and sending them back after the Syrian war ends.

“All we ask for is that they behave properly and not disturb people. Is that too much to ask for?" he said.

Dereci, however, said that the rules of hospitality demand that the Syrians be treated as guests. He said that Turkey 40 years ago would have been too poor to extend a helping hand, but it is able to do so now.

“How could anyone with a conscience sit around with a full stomach while their neighbour has to go hungry? It is our duty to help.”

Dereci tends to shy away from labelling entire communities on the basis of isolated incidents.

“There are bad sorts, thieves among every people. But generally our area is very safe and most of the people are good and decent. This includes the Syrians.”

Gulmez, on the other hand,  accused Syrians of being responsible for skyrocketing rents. This is a frequent complaint, although the landlords demanding these high rents are not Syrian, who themselves are also victims of such practices.

Isam Abidi came to Istanbul two years ago and set up the first Yemeni restaurant in Fatih. The 52-year-old said that high rents and a deteriorating economy are challenges he is trying to overcome.

Abidi, who owned and opened the first Yemen restaurant in Damascus 17 years ago, said that his business depended mostly on Arab tourists.

"Turkish people are not open to trying new foods. Most of the people eating at my restaurant are people who love rice - Arabs, Africans and people from the Far East."

Yet Abidi, who is originally from the Caucuses region, feels very welcome among Turks. He said that they treat him like one of their own.

Despite the challenges, Abidi feels a strong affinity towards Turkish people and said that he would never consider leaving Turkey for a more affluent life in Europe.

“Turkey opened its doors to us and we feel welcome here. I managed to open up my business and have the same rights as a Turk," Abidi said. "Europe on the other hand has been selfish about helping Syrian refugees. And no Arab country has even let us in."

"The only place I would trade my home in Istanbul for is to go back to Syria." 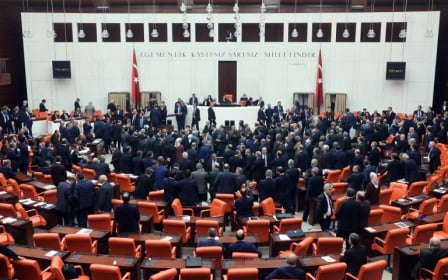