In the absence of a functioning government, cafes, bars and restaurants in the Lebanese capital provide space for cultural and artistic activities 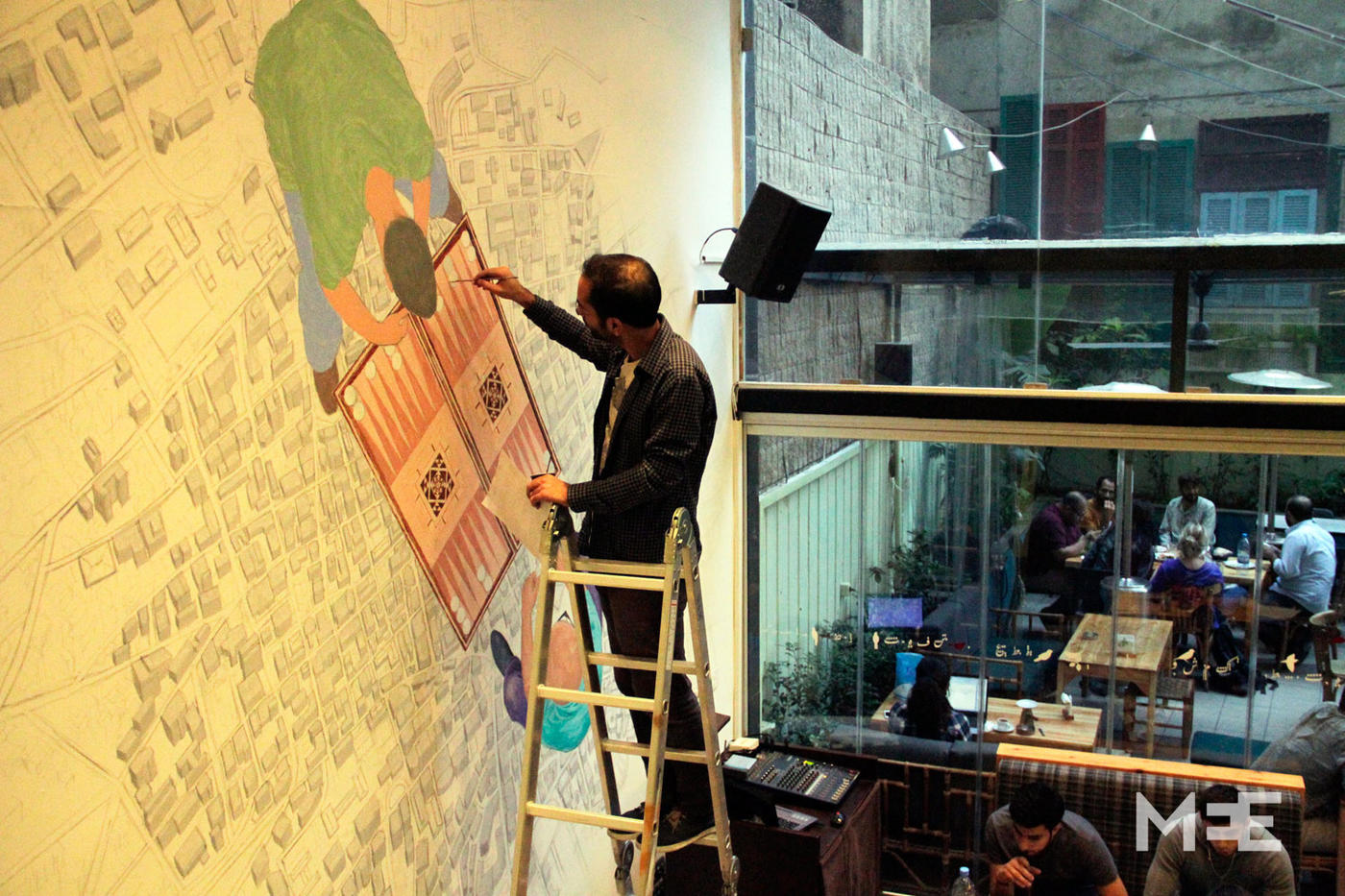 “A human being is primarily a bag for putting food into; the other functions and faculties may be more godlike, but in point of time they come afterwards.” Mansour Aziz, the Mezyan’s co-founder, reads George Orwell’s quote out loud.

“Yet it is curious how seldom the all-importance of food is recognised,” he continues. “You see statues everywhere to politicians, poets, bishops, but none to cooks or bacon-curers.” Aziz stops reading and bursts out laughing, sitting at one of Mezyan’s old-style wooden tables. In the background, a song by the Egyptian musician Shikh Imam is playing over the loudspeakers.

Mezyan is the only bar and restaurant in Beirut’s famous Hamra Street with an old Arabic ambience. It is difficult to find the restaurant as its entrance is at the dark end of a commercial building. In rapidly changing Beirut, which is losing its public spaces and most elements of its golden era, very few places still offer the combination of Lebanese food and a space for socialising and cultural activities.

Inside Mezyan, photos of Umm Kalthum, the famous Egyptian singer, and scenes of old Egyptian movies hang on one wall. Aziz passionately talks about the nostalgia of old Hamra, when traditional cafés and restaurants were still around.

The forgotten spirit of old Hamra

Before Lebanon’s civil war, Middle Eastern intellectuals and artists filled Hamra’s cafes and bars at the heart of Beirut. Cafes like Modka, Horseshoe, Express and Strand were the meeting place for Arab, Turkish and Persian politicians, activists, artists, poets, journalists and academics.

That image disappeared after 15 years of the civil war, which ended in 1990. After the war, when the reconstruction era began, real estate developers continued the civil war’s unfinished job and flattened more of Beirut’s architectural treasures and cultural heritage. At the same time, Western cafe and restaurant franchises took the place of old bars and restaurants.

It was the nostalgia of old Hamra that motivated Aziz and his partners to open Mezyan in 2010. He remembers the days when there was no place in Hamra to “go, sit, have a chat, read a book, listen to good music and see friends”. The insanity of rebuilding a war-torn city has been demolishing Beirut’s old spirit.

“We live in an Arab city, but finding a bar or restaurant with Arabic music and food is getting more and more difficult,” Aziz says, struggling with two sticks to put up his long curly hair.

Early in the evening, his restaurant is not crowded yet. At the bar, two young men talk to the bartender. The kitchen’s door is open and, behind the barman, a vegetable stall adds shining colours to the darkness and quietness of the place.

Though Aziz emphasises that Mezyan’s primary objective is serving good food in a traditional atmosphere, it also serves as a cultural and social centre in a city that suffers from a lack of such spaces.

For instance on 14 February, the restaurant’s wooden tables were turned into stands and a garage sale was held in support of the Syrian refugees in Lebanon. Second-hand clothing, necklaces and earrings, toys and accessories such as an umbrella and fruit molasses were sold in the market.

Other activities with more political agendas also take place in Mezyan. In March, when Greek’s Syriza party came to power, a member of the party’s international commission gave a talk at Mezyan, explaining Syriza’s plans and goals. On that occasion, apart from locals and students, academics and historians such as Professor Fawwaz Trabolsi were also among the audience.

Another restaurant in Beirut, on the same street and not far from Mezyan, offers more than just food to its regulars. Posters of concerts, theatres, art exhibitions and documentary movies always cover T-Marbouta's glass entrance. Inside the restaurant, English and Arabic books and DVDs fill the bookcase that covers an entire wall.

Although T-Marbouta serves only Lebanese food, the restaurant’s interior design is far from Mezyan’s oriental ambience. Sandy-coloured tables populate the restaurant’s small yard, which is surrounded by neighbouring houses' high walls. French-style window shutters coloured in red, green and blue are installed on one of the yard’s walls, perhaps to reduce the feeling of being trapped between the huge buildings.

Areej Abou Harb, T-Marbouta’s cultural activity director, says that the managers have been considering providing a platform for art and cultural events since the restaurant’s launch in 2006, in order to palliate the lack of access to public cultural spaces in Beirut.

At the end of T-Marbouta’s dining space, narrow stairs go up to a small reading room. Everyone can use this room and its book collection for free. Sometimes, a small group of Syrians sit around one of the tables in the room and practice English with a native speaker.

Some recent cultural activities held at T-Marbouta include a screening of The Wanted 18, a documentary about Palestine; dedicating a small space to exchanging second-hand books; and holding memorials for Palestinian cartoonist Naji al-Ali and the Sabra and Shatila massacres.

Explaining the restaurant’s goals, Abou Harb recalls a legend from the famous Syrian traditional singer Sabah Fakhri. It is said that if Fakhri had a concert in a restaurant, he would first go to the kitchen to taste the food. He wanted to be sure that the food was as good as his music. “In T-Marbouta we try to have cultural activities as good as the quality of the food,” Abou Harb says.

As Abou Harb explains, the restaurant was supposed to open in July 2006. However, because of the outbreak of the Summer War with Israel it was postponed. During the 34 days of Israeli attacks, T-Marbouta was one of the places to organise volunteers and provide assistance to refugees from the south of Lebanon. Later, when the restaurant finally opened, it had a small reading room, a library and a book club.

Recently, T-Marbouta has expanded its cultural activities, and free screenings of short films and documentaries are becoming a part of its monthly schedule. T-Marbouta also has a corner for visual art, where during the summer "The Missing Father," an installation by the Syrian artist Thaer Marouf, was displayed.

Marouf’s installation was a mixture of painting and sculpture. The painting showed a family sitting around a silhouette and the sculpture was a life-size human body made of plastic adhesive materials and newspapers.

In 2013, the artist displayed the same piece in the Beirut Art Fair before exhibiting it at T-Marbouta. He thinks if people do not have access to art, then art should approach them.

“Art institutions in Lebanon are either absent or a monopoly," he says. “My decision to display this artwork at T-Marbouta was based on my conviction that art should be available for everyone.”

According to Marouf, his conceptual piece was shocking for many of the customers in T-Marbouta, because of its references to the bitter humanitarian disaster in the Middle East.

“This work added another dimension to the cafe, to a place that draws in an unpredictable and different crowd,” Marouf says. “Herein lies the importance of displaying such artwork in a public place.”

A new cafe with old goals

In March, a new cafe opened at the end of Hamra Street. Zenjabeel, meaning ginger, is a two-story Western-style coffee shop and bar. A narrow wooden ladder from the first floor leads up to a cosy corner surrounded by bookshelves, in which collections of different novels are kept for customers to borrow.

Screening movies for free is another cultural activity at Zenjabeel. So far, the late Lebanese director Maroun Baghdadi’s films and the documentary Fallen Television have been screened. However, watching these movies on Zenjabeel’s small screen with a poor sound system is far from an ideal experience.

With a lack of a functioning government in Lebanon, people in Mezyan, T-Marbouta and Zenjabeel have come up with a new approach to creating happenings in their restaurants, spending a part of their profit on artistic, cultural and social events.
“Lebanon has not had a president for over a year, our politicians cannot even solve the garbage crisis, and obviously they have no concern about cultural and social activities,” says Mustafa al-Fakhry, one of the regular customers at Mezyan. “These restaurants’ initiatives are the only way that Lebanese people can back each other and provide a comfortable breathing space.”