Love in the time of revolution

A Syrian Love Story, a documentary about two political activists in Syria who met in jail, took five years to make. MEE meets the director 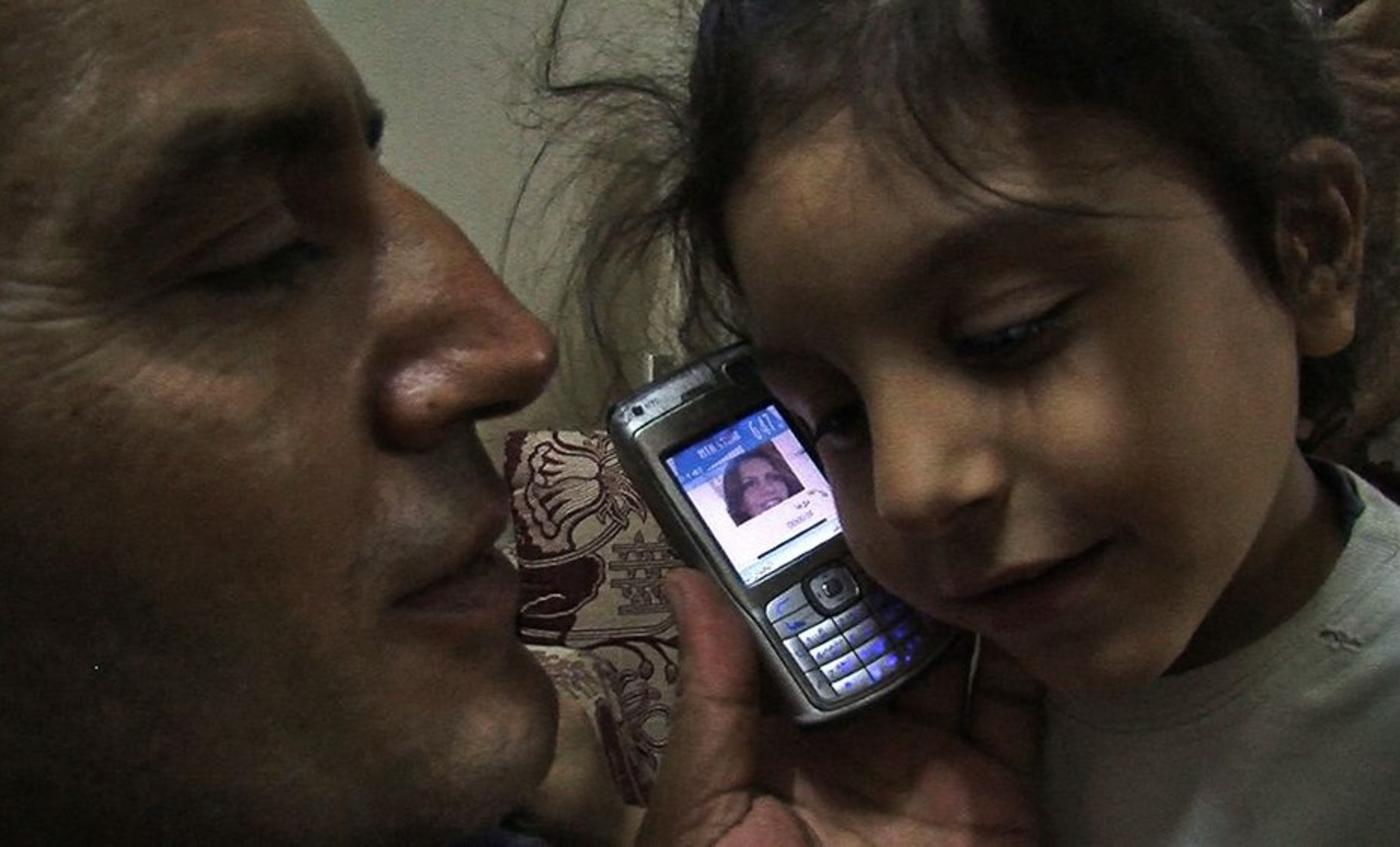 A still from A Syrian Love Story, currently on release and for broadcast in Europe and the UK. Amer with his son Bob talks to Raghda while she is still in prison in Syria (Sean McAllister)
By
Joe Gill

It’s a story of a man and a woman struggling to survive and stay together as they battle a brutal Middle East dictatorship. If it was a Hollywood drama, it would end with its two leading characters escaping to freedom and happiness in the West.

But A Syrian Love Story is not that film. Sean McAllister’s documentary is a powerful, moving real-life story of the lives of Amer, a Palestinian, and Raghda, an Alawite from the coastal city of Tartus, both political activists who met in a prison in Hafez al-Assad’s Syria. When Amer first sees her in jail, Raghda’s face is bloodied and bruised after one of many torture sessions. In adjoining cells they begin to talk through a hole in a pipe and gradually fall in love.

The film, shot by award-winning director Sean McAllister over five years, begins 15 years later in 2009. Bashar al-Assad has succeeded his late father as president. Raghda, a committed leftist from the president's heartland, is once again in prison – her crime, writing a book critical of President Assad.

Amer is looking after their boys, Bob, four, and Kaka, 14, and desperately wants to get his wife out of jail. Then he meets McAllister one night in a bar in Tartus – Amer is on the phone to Raghda in jail when they meet.

Amer, speaking from France via a link-up after a showing of the film, said he initially thought he couldn't trust the journalist. “He is English, he’s in the street with his big camera, asking strange questions to anyone about freedom, about imprisonment, about the president. It was very strange, but at this time I was calling my wife, she was in prison. And he asked me directly who is this woman, and I say she’s my wife, she’s in prison. But if you want to know more, stop asking the people in the street, and follow me. I give you what you want, I tell you the truth.”

That’s how it began. McAllister had no idea then that he would make a film that in many ways encapsulates both the Syrian uprising and civil war, but also the refugee crisis that has now become such an urgent issue in Europe. “I never set out to make a film about the refugee crisis... I’d spent 20 years making films in the Arab world. I found myself in Baghdad and Yemen, in different places where there were conflicts and wars.”

McAllister was drawn to Syria after making the documentary, The Liberace of Baghdad, following - at some personal risk - the life of an Iraqi pianist in the bloody aftermath of the US-UK invasion in 2003. But finding a story to latch onto in Syria proved to be more difficult. “I spent eight months [in Syria] trying to find a story. It was a time full of lots of angst and lots of soul searching about why I was there… My initial attraction was to make a film about a functioning dictatorship.

“There was something really special about Damascus. It was the Baghdad I didn’t see – when I’d gone to Baghdad they’d talk about the 80s, the golden days when there was fun and fear. So I was living in this time of fun and fear, a time of secularism, when people could drink and dance."

Meeting Amer gave McAllister the story he needed – he held on and didn’t let go. “When I met Amer I realised that this whole place was a charade, it’s a game, a show where Westerners could drop in on holiday for two days to Damascus and enjoy ... a functioning dictatorship. Scratch the surface and in actual fact it was jam packed with political prisoners. It was such a simple and clear story, why should a guy be left looking after his kids when his wife is in jail?”

It was the beginning of a five-year journey, taking the saga of the family drama from Syria through Lebanon and Europe to France. In 2011 the Arab world was swept by protests, regimes fell across the region, and people took to the streets in Syria. As a result, Raghda was released. All this is captured in the film – her homecoming celebration, glasses of arak and the unimaginable suffering that we can see in Raghda’s face in comparison with the images of her before she was imprisoned.

Amer, Raghda and even Kaka join demonstrations. The government cracks down, Kaka is held and beaten but not jailed. Then, in October 2011, as the toll of violence increases, McAllister is himself arrested.

“I was picked up, blindfolded, bundled into a car,” he explained to an audience in Brighton. “I was taken to a security centre, where they were beating people. There’s a rite of passage where they take you down to a dungeon and on the way there you are beaten by these young kids with inner tube tyres and eventually you get to the dungeon. And it’s so crammed full of people that there’s not even room to lie down and the prisoners have to take it in turns. Throughout this incarceration there is always someone being hit, tortured or electrocuted, so there is always the sound of someone howling in pain. This is a systematic method to try to traumatise the people [in jail].”

He was held for a week, but his British passport and diplomatic pressure ensured his release. Meantime, discovering that Sean has been arrested, Amer and Raghda have no choice but to flee the country.

The filmmaker rejoins the family in Lebanon. Here, life is very difficult – the children cannot attend school, Amer cannot find work, and Raghda is suffering from being away from the struggle unfolding in her homeland. Arguments escalate and then, one day Raghda disappears, crossing the border back to Syria.

This is a turning point for the couple, and of course, McAllister is here to film the crisis.

McAllister explains his filming method as “fly in the soup” rather than fly on the wall. “When I studied documentary we were told that you would observe what’s going on and not interfere in it.” He has no time for the traditional BBC idea of objectivity and subjectivity. To McAllister, this is "baloney”: “I came across this other school of documentary making which is where you just dive into somewhere and you take the audience with you, and you let them know from the very first frame that we're going into some place and we ain’t observing, we’re in there.”

Over time, McAllister became a part of the family. As the couple become estranged, he describes his role as a “sort of cameraman come therapist”.

Raghda returns to Lebanon after three months, but things are never the same. The trust is broken. The family is finally able to claim asylum in France. Life begins to return to some sort of normality, but the couple are arguing more than ever. We watch them in their new French flat, as they smoke and drink and fight. There is no resolution.

Raghda at last finds a role that satisfies her need to support the struggle for freedom in Syria. She becomes a cultural advisor to the Syrian opposition based in Istanbul. The film reaches its logical conclusion and McAllister's extraordinary epic is over. Or is it?

“I started filming before the Arab Spring. I was the one person they could connect with. The film was not commissioned until very late in the day. They’d lost hope that the film would ever be made. I was just this weirdo who kept turning up with a camera.”

Amer agrees: “Sean knows everything in our life, any small detail he knows it. Sean is our witness, our friend, he is member of our family. Sometimes I call him and say come to France, and after he goes to see Raghda. But at last I don’t want Sean to continue with this film. I say many times ‘Sean, stop this film, enough now, what are you waiting for? I feel you have come inside my head to film my dreams now.'”

To the children McAllister was a playmate and friend. "I love Sean," said Bob, speaking from France. Their story is perhaps the most emotionally wrenching part of the film, from Bob's phone calls to his mother in prison, to his tears years later in France as he looks at photos on the computer of the family's life in Syria before all their troubles. "Those days were beautiful," says Bob.

MEE asks Amer how the film has changed him and Raghda and the boys. “I think the film changed our lives but in a good way. …we lost our life in Syria when we started to be against the regime. We started to lose our friends in the street, we lost our life, our jobs, everything.

"Sean’s film gave me some hope to continue our life in a good way. I think the problems between me and Raghda were not because of the film, it is because this revolution changed everything in a person’s heart. And what happened to the people, how they died or are in prison, these things make a difference between me and Raghda, and we start to fight, and I think Sean is not guilty, and the film is not guilty for this.”

Asked what the West could do now to help the situation in Syria, Amer answered: "I think it’s too late now. If you asked me this question four years ago may be I would have a good answer. Now, there is a war in Syria – it’s not just one war, it’s many wars inside Syria. And the country is crushed completely, there is no chance to help, to do something. But a good way the Western governments can do something is to …help some refugees in Europe, or open the door for the people who want to stay alive."

Amer has moved with the family to a beautiful town in southern France where he tends a garden, living a “quiet life” but still working to help refugees. “All the time I think about others, the people who have no life like me, people who are now in the same situation as I was, in Lebanon, as a refugee with nothing to eat, no house, no money, no job, nothing,” he says.

Raghda still visits the family. After a year of estrangement, they now get on. “She is still Che Guevara,” says Amer.

”With the film in Europe they are back together again, working together again not as lovers but as comrades, using the film to talk about the refugee crisis in Syria," says McAllister. "So in that way it’s beneficial.”

Culture
Divided by the war: Inside Venezuela’s Syrian community
Culture
Recreating paradise on Earth: Secrets of the traditional Damascene home
Culture
In pictures: The endangered tradition of salt farming in Lebanon 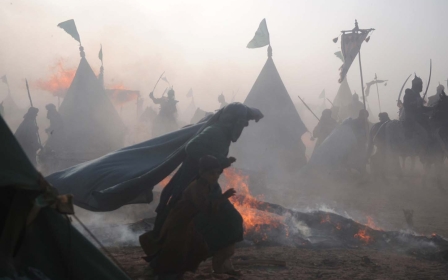 Culture
He Who Said No: Iran’s most controversial movie? 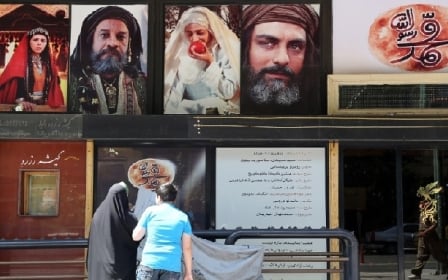