Migrants call for freedom from Greek detention centres: 'I was forgotten here'

Police abuse, lack of legal services and isolation of the most vulnerable: an inside look at Greek detention facilities reveals appalling conditions 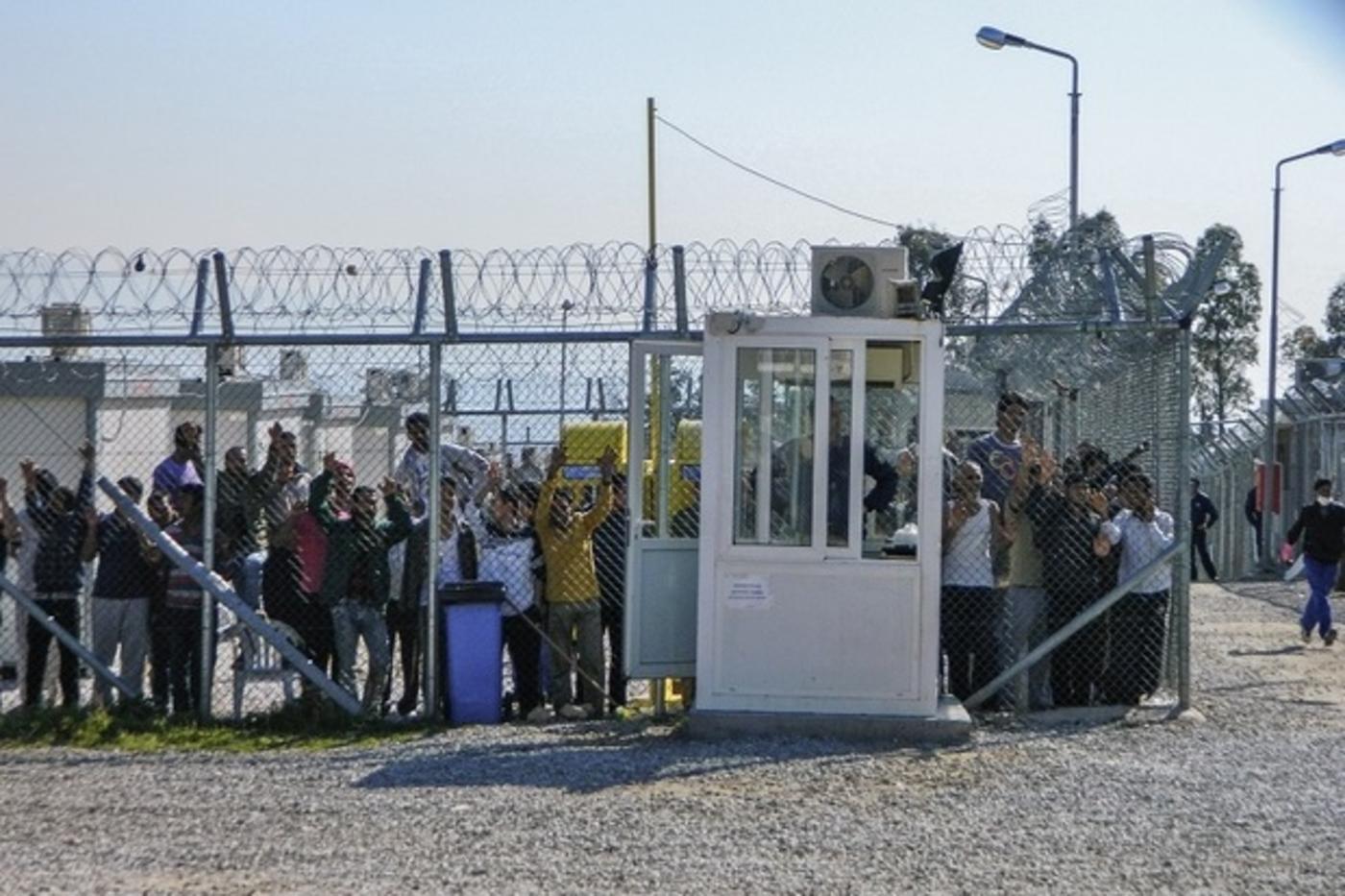 ATHENS, Greece - Shayan Samad, an Iraqi Kurd, rests her head on her hands. "I often felt like I found myself in a theatre play, staged to mess with our minds," she said. "After months of detention you're slowly going mad, apathetic. A life outside seems remote and unreal."

Samad is one of the "irregular migrants" who tried to reach Europe in October last year but ended up instead behind bars in a Greek migration jail. She lived there for five and a half months.

“Our goal was Italy but after four days of travelling from Turkey, the boat slowly started to drown. We were forced to land at Gytheio port without realising we reached Greece,” Samad recalls.

She is now staying in Athens waiting for her September interview for asylum and works part-time in a local NGO as a translator. Samad recently took part in David Edgar’s play Pentecost.

Samad, originally from Sulaymaniyah in northern Iraq, was detained as an "undocumented migrant" at the Petrou Ralli detention facility in Athens. She was also transferred to three other facilities, including the police station.

"We had access to sunlight only one hour per day," she said of her detention at Petrou Ralli, a four-storey facility. "Sometimes we stayed locked [up] for days in cells, if the police decided so."

She describes how she was kept with criminal suspects including burglars and how a "man, a local Greek, threatened to enter my prison cell while I slept. Even if I was locked in a separate cell, I was afraid for my life all the time."

She was released on 13 March after her lawyer intervened at the Greek asylum service. “ A policeman came to my cell and told me: 'You are free now.' I didn’t believe it. During my stay in detention I demanded a hundred times an explanation for why I was still being detained. No answers were given to me,” she recalls.

Samad ran away from her family in Iraq in September 2016, after her uncle tried to force her to accept an arranged marriage.

She had become involved in a relationship with an American soldier, who later left her and did not help her escape the country. According to Samad, her family disapproved of the relationship and her uncle beat her badly a few times after she was found in the company of the foreign man. He later tried to force her into an arranged marriage before she decided to flee.

'I was forgotten here'

“I still regret I never hugged my mother. I didn’t touch her hand and say goodbye," she said.

Behind the wired fence at the Amygdaleza detention centre, in northern Athens, MEE meets 24-year-old Moroccan Mohamed Khallouf. “I was forgotten here,” he said.

Amygdaleza does not leave its visitors untouched. Migrants here are detained in white containers surrounded by fencing. When they see guests, they hold onto a dusty wire fence, desperately trying to make eye contact or touch with the outside world. Many of them are detained for months and police allow visitors to stay less than 10 minutes, after a security check of visitors' bags has been completed.

“After weeks of detention today, I hate this country. It brought me nothing but humiliation and sorrow,” Khallouf said.

Khallouf recalls his detention experience in a police station in Ampelokipoi, a central area of Athens in June. “I spent 12 days detained in a police station in Athens. It was a horror. Dark and dirty, we were all locked in small overcrowded cells and food was not edible. Police constantly ignored our requests for medical help," he said.

There are more than 62,000 migrants and refugees in Greece, with 14,877 of them living on different islands. They do not have permission to leave the islands.

"On the islands, we have already started seeing the implementation of the European Commission’s inhumane recommendation for increased detention and returns, that has resulted in the detention of vulnerable people, including families with children,” Eva Cossé, the Athens based researcher for Human Rights Watch (HRW) tells MEE.

According to the latest report by HRW, migrants in Greece live with insecurity, harsh camp conditions, lack of access to services and information, detention and fear of being deported to Turkey, following the EU deal with Turkey, signed in March 2016, to stem the flow of migrants and refugees to Europe, in return for financial and political gains for Ankara.

'I hate this country. It brought me nothing but humiliation and sorrow'

“We were trapped on Chios island for two and half months. [There was] no option to leave the island, just waiting and waiting,” Khallouf said from Amygdaleza.

Facing harsh economic conditions in Morocco working as a security guard, Khallouf arrived in Greece last December with a dream of travelling to England and starting a new life there. “I wanted to reach England, find a job and get a life like any other person wants.”

But his dreams fell apart when he reached the Greek mainland and got arrested. He was deported and arrived in Morocco on 9 August.

“Yes, I gave up on my European dream, but only for now,” he tells MEE before leaving Greece.

Saqlain Mushtaq, a 20-year-old Pakistani, spent one month on Leros island, in the southern Aegean sea, without actually seeing its beauty.

“We were arrested on the sea - 60 Pakistani men. We were handcuffed and taken to the camp,” he reveals. Mushtaq and all of his fellow travellers were not allowed to move freely on the island but spent their time in detention, before being moved to mainland Greece, once again in handcuffs.

“Police allowed us to leave our cells for half an hour only in the morning, but not on Sundays. Then we would stay in all day,” Saqlain reveals.

In recent months, Greek authorities have built "pre-departure centres" on some of the islands.

On 31 March, migration minister Ioannis Mouzalas said in a statement to Greek parliament that "new closed detention facilities on the islands will establish a precondition for the asylum system to work smoother. We are building improved detention centres."

At the Petrou Ralli detention facility, detained migrants desperately try to communicate with the outside world. While some repeatedly shouted "freedom" others hold up signs which read: "I am from Syria. I don't want food. I want freedom."

“We got very little food: one piece of bread, a little chicken sometimes or potatoes. We were always hungry. The cells were dirty, we could not clean them as we had no cleaning products,” he describes.

'We were always hungry. The cells were dirty'

In a report last year, the Council of Europe's Committee for the Prevention of Torture and Inhuman or Degrading Treatment or Punishment stated that the Petrou Ralli facility was “totally unsuitable for holding irregular migrants for prolonged periods”. It added that pre-removal centres in Greece generally treat migrants like "criminal suspects".

Isolation of the most vulnerable

The health issue in detention facilities is alarming. On 6 February 2017, an Algerian man died in Petrou Ralli.

According to local media reports, police authorities stated in an announcement that: “We informed the doctors inside of the detention facility that the migrant is a drug user and is suffering from hepatitis.”

But local newspaper Efimerida ton Sintakton reported a few days later that doctors in the detention facility denied these allegations and said they were informed about the migrant's condition after he died. An inmate who preferred to remain anonymous told MEE that the inmates asked police guards to transfer the Algerian man to a hospital four times, but their requests were ignored.

Samad confirms the existence of such cells in the Petrou Ralli facility. “On the second floor there are a few abandoned, dark, very dirty and smelly cells. In these cells there are sick migrants.”

"I remember once there was a woman from Congo who was HIV positive," said Samad. "Police locked her in a remote cell and isolated her from the others.

"Being isolated while already detained is a hundred times worse," she added.

'Why not to Iran or Jordan?'

The mental health of migrants is also at risk during detention periods. During a protest outside of Petrou Ralli in Athens on 23 June, MEE witnessed one of the prisoners put a belt around his neck and then tie it to bars of the small prison window. Inmates intervened fast to remove the belt.

According to HRW, Medecins Sans Frontieres (MSF), reported a high prevalence of depression, anxiety, and psychosis, and a significant increase in suicide attempts, particularly since January 2017 on the islands of Samos and Lesbos.

'I wanted to sleep all the time, I felt empty and emotionless'

"After three months of detention my mental health slowly started to suffer," Samad said of her stay in Petrou Ralli.

Panic attacks and depression as a consequence of long-time detention was how her case was diagnosed by the general practitioner in Nikaia state hospital in Athens, after she was taken there in handcuffs. Samad was then taken to see a psychologist at Petrou Ralli.

She said she was prescribed antidepressants and sleeping pills, before being asked by the psychiatrist why she had come to Greece. "Why are you all coming here? Why didn't you choose Iran or Jordan?" But the pills did not help Samad.

"I wanted to sleep all the time. I felt empty and emotionless," she recalls. "Before I would resist the humiliation that the police exposed us to many times, depriving us from sunlight or medical help. I found myself in a condition where I didn't care any more."

Police violence in detention centres was also reported in many other cases. For example, in the case of Moroccan Sanaa Taleb, who in October 2015, after six months of detention, resisted forced deportation and faced police violence as a consequence.

Police officers pressed charges against Taleb "for disobedience and resistance to the authorities". The court at Evelpidon in Athens later dismissed the charges and let Taleb walk free in April 2016,  after she was detained for over one year. She now works in Greece as a waitress.

Greece's public order ministry did not respond to MEE's request for comment on the accusations and the state of detention centres, at the time of publication.

"I always had a feeling police don’t consider us [migrants] as human beings," Samad said. After her bitter detention experience, Samad sees many things differently.

"I used to believe jail is for bad people, for criminals, for people who hurt others," as she recalls her time in a cold prison cell. 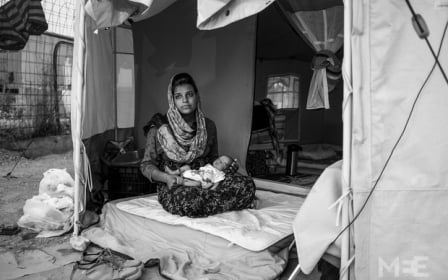