Villagers hold out on mountain-top base seeking more jobs and wealth from mine, and answer to rising health concerns 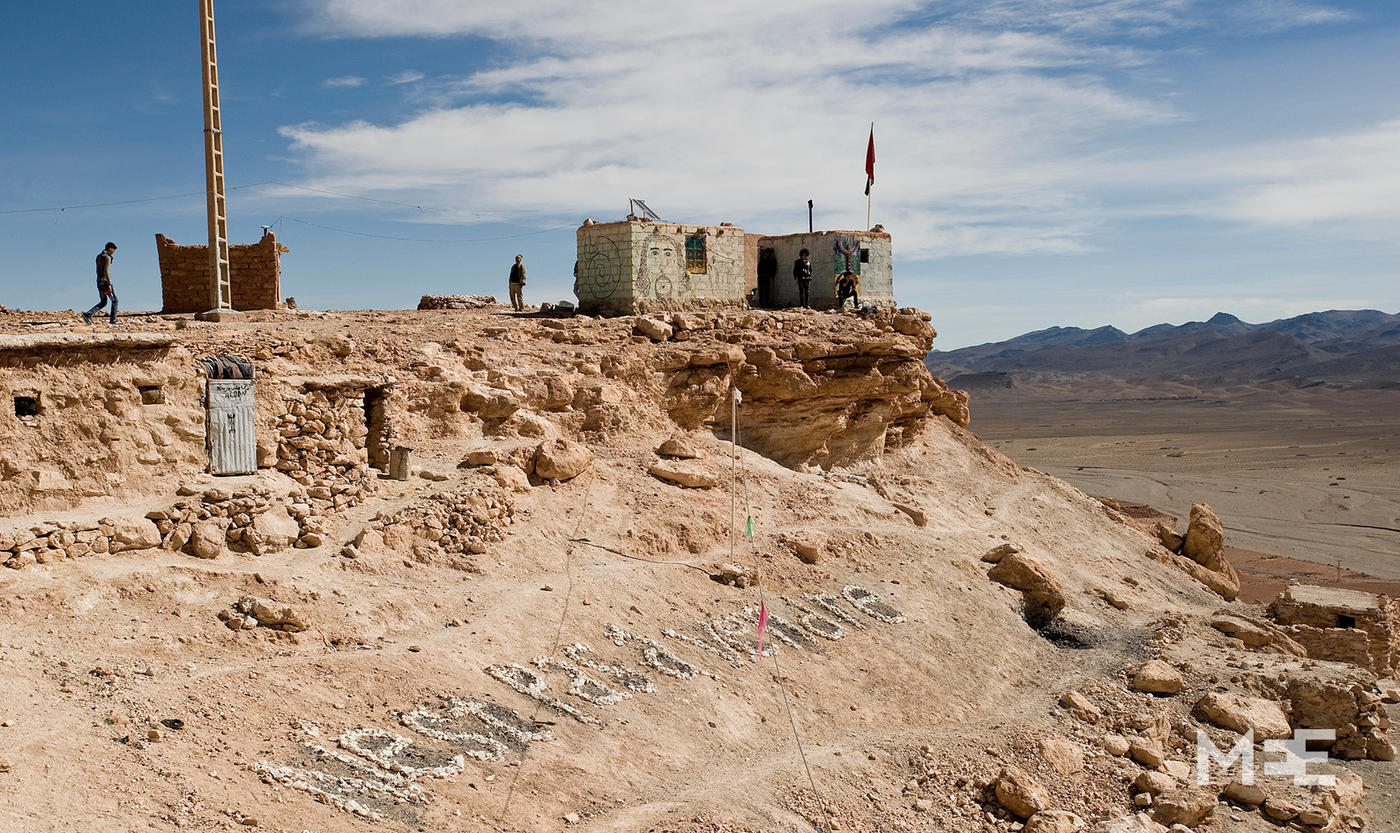 Huts of Imider-protesters on top of an Atlas Mountain. The text reads on the ground reads Not For Sale in French (MEE Archive, February 2014)
By
Alan Green

IMIDER, Morocco - The small camp on Mount Alebban, about 300km east of Marrakesh, is a rough place in 50 shades of brown. When a strong wind blows, sand and small rocks hit you in the face and sting the eyes. In summer, those who live on the High Atlas mountain suffer a sometimes blistering heat, and then the freezing cold of a winter in the mountains. Electricity is almost non-existent, except for a battery to charge cellphones in one of the huts made of rocks, clay and wood.

A group of protesters has been living on that mountain between Boumalne Dades and Tinehrir, as it is known to the locals, for exactly four years. From the hilltop, they overlook the national N10 road and the valley beyond. On the other side of the valley, visible between the faraway hills, lies the object of their protest: the SMI silver mine, the biggest of its kind in Africa.

“The mine is on our ground, but we don’t profit from it. It pollutes our lands,” said Moha Ed-Daoudy, one of the protesters. Some believe the works are contributing to cancers now evident among villagers and which they say were not seen before.

The occupants come from Imider, a small commune of seven villages. Their protest started in August 2011 after some youths were turned down for temporary jobs at the mine. According to the mine’s management, they did not meet the job requirements, but the Imider-youth did not accept that explanation.

Others, including some of the villagers who worked in the mine, joined the protest. They closed down one of the water sources of the mine, which they say was dug illegally.

Since then, the people of Imider have been guarding a pumping station on the hill, taking turns living in their makeshift village of huts. On average, Ed-Daoudy said, about 100 people stay on the mountain each day, with teams designated to carry out different chores: cooking, building, and bringing up water and food from the villages down in the valley.

The demands of the protesters are basic. They want an independent environmental study on the impact of the mine. They want jobs and education, better infrastructure and health care.

In four years, however, little has changed. The initial dialogue with the mine’s management and local authorities came to a halt in 2012 - the parties blame each other for that - yet the protesters refuse to call their protest futile.

“We stay,” said Ed-Daoudy, sitting in a small mountain-top cabin. On the walls are statements and names of protesters who have been taken to prison. “The hope that things will change is what keeps us going.”

The silver mine Imiter Mettalurgic Company (SMI) opened in 1969 and has expanded ever since. It is part of Managem, which in turn falls under SNI, a holding of the Moroccan royal family. In 2014 it produced about 185 tonnes of silver-metal, and it made an operating income of around $45 mn.

The protest initially hit the mine hard. In the last months of 2011 it lost 36 percent of its capacity; in 2012, 18 percent (according to the Managem spokeswoman). The next year, however, production was back to normal as the mine partly economised on water and dug new wells. The leverage of the villagers was gone, but they stayed.

According to the protesters, the silver mine has had a big impact on the seven villages that form Imider. They say the water became polluted with chemicals used by the mine, and the elders tell the young how crops from fig and olive trees have diminished over the years.

Worse, “cancer has entered our villages, people have got problems with their eyes,”, said 27-year-old Omar Ouadadouch. “Those diseases didn’t exist before. We want an independent investigation, as the only cause we can think of for those diseases is the mine.”

Despite repeated requests, a spokesperson for Managem did not answer MEE’s questions over the past weeks. In previous emails however, the spokesperson stated that SMI is working with all the required permits and that the mine is not the root of local health issues.

“The mine has no negative impact on the environment, studies show. People who work in the mine don’t suffer health issues and the riverbanks are not polluted,” she wrote in an email dated February 2014. “In general, the mine has had a positive impact, satellite images show that there is more green now than in the sixties.”

Also, she wrote, Managem has helped to build an irrigation system, and  “We invest close to one million dollars a year in projects in the region for education, water, health and the development of women.”

The men on the mountain, huddled together in one of the huts to take their lunch, have little faith in the environmental study and the mine’s permits. They said the investments in the region mainly benefit the town of Tinehrir, some 25 kilometers away. The town is growing, new roads have been built, and it has a hospital.

They shrug at the medical help the mine promised. The mine’s doctor, who is supposed to visit Imider twice a week, is “never there”, they say.

“His office is always closed. There is a nurse, but her job is basically to give you a paper and send sick people to Tinehrir or Boumalne,” said Ouadadouch. “We would like to have a small hospital, with basic equipment for scans for example. Thousands of people live here, but the health care is bad.”

The people of Imider are also demanding education and jobs through their protest. Unemployment is high in the community, and they argue that 50 percent of all future jobs in the mine should go to young people from Imider.

The mine rejects that demand as “impossible”, but the protesters stick to it. Ed-Daoudy said: “The mine says more than 20 percent of its workers come from our community, but it’s not more than 14 percent. Our life is under threat. There is wealth in this area, but not for us.”

Although the Amazigh (Berber) flag waves proudly on the hilltop, theirs is not a struggle about discrimination of the Amazigh, Ouadadouch said. That flag is just “to show our identity”.

“This is a struggle of poor against rich,”  he said. “We have no other means to be heard. They are taking our wealth, and by doing so they are slowly killing us.”

That remark puts the protest in the heart of the current discussion in Morocco, started by king Mohammed VI on 30 July last year. On Throne Day 2014, he spoke about the economic development of Morocco.

He stated: “I wonder, as do all Moroccans: where is this wealth? Has it benefited all Moroccans, or only some segments of society?… The facts on the ground indicate that not all citizens have benefited from this wealth.”

He asked his government for a study to map the areas that needed help, and in his speech of 2015 called for a “plan of action”.

So no, said Ouadadouch, their fight has not been in vain. He is convinced that the Imider protest has helped to spark the national debate. “That is something we achieved, even though things haven’t changed much for us.”

The four years of hardship and lack of progress might be a reason that sometimes it has been hard to keep the protest going, Ed-Daoudy said.

“Some people quit because they went to the cities to find jobs, money is a problem. Others went off to study, or just gave up. We still have group meetings twice a week, to determine our course of action. Everybody can speak his mind freely, and people want to go on. So we go on. It is all we can do.” 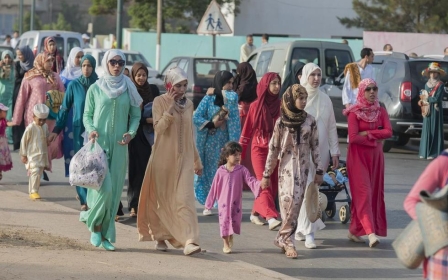 Inside Morocco
Morocco's skirt length battle: What are the deeper questions?
Myriam François