The international trade in space rock is lucrative in Morocco, but academics are pushing for a new law to end it 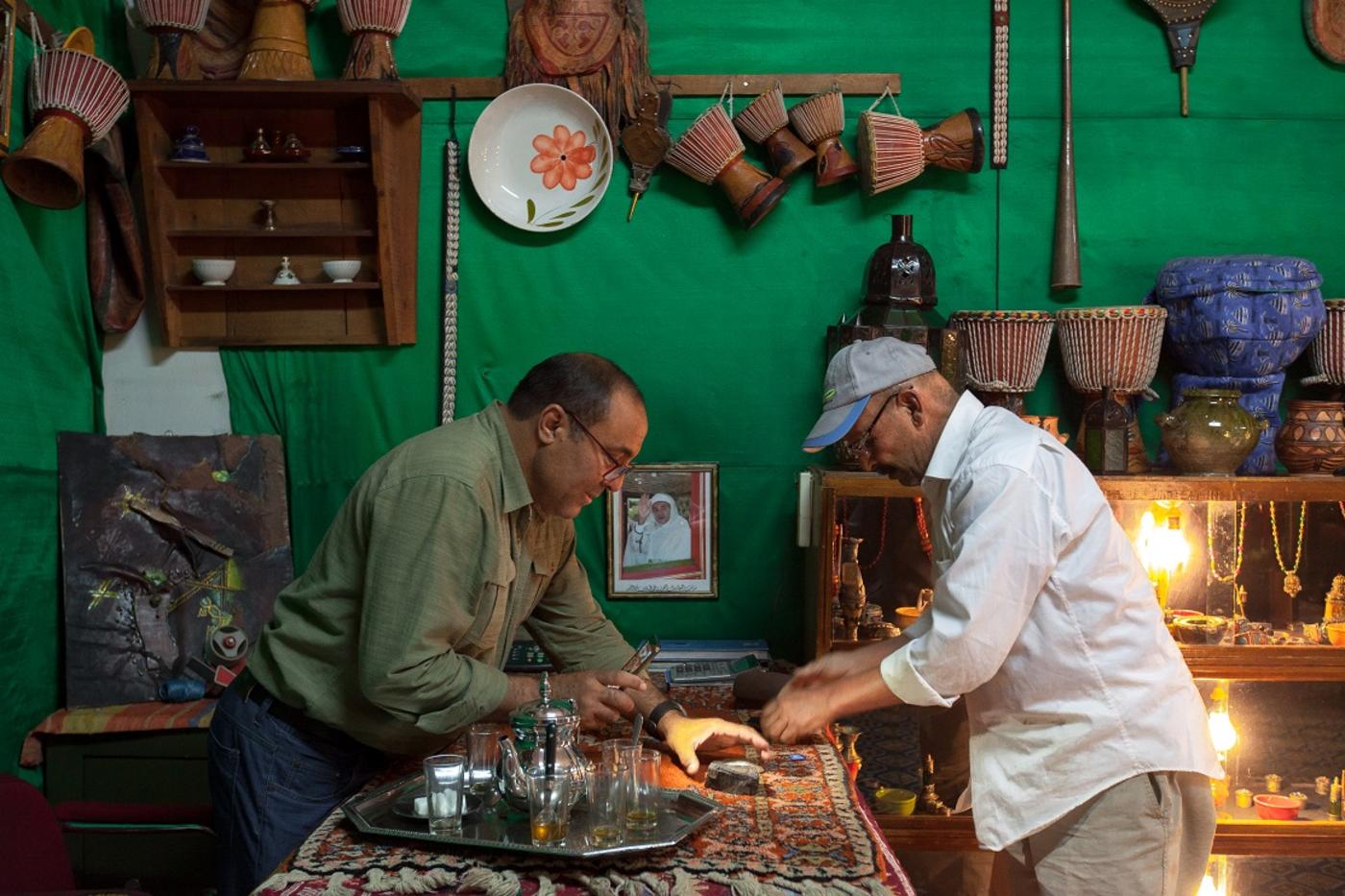 ERFOUD, Morocco - The main artery of Erfoud, in southeastern Morocco's Draa-Tafilalt region is pretty empty, but nothing gets by Hakim's discerning eyes. As he sits outside a coffee shop with a cigarette in hand, he patiently awaits his next potential client. Every time a tourist passes by, he gets ups from his chair and heads towards the unsuspecting traveller, offering the usual package.

During the conversation, if Hakim senses that the person is interested in what he has to offer, he then escorts him to what are locally known as the meteorite sellers.

In Erfoud, it is estimated that 70 percent of the population lives on the extraction and sale of its geological heritage

Bachir Boudine is one of them. Aged 51, he travels to the United States several times a year with his younger brother, smuggling meteorites through the borders to sell them for a generous profit.

On the boundaries of Erfoud city, heading to Merzouga, Boudine owns a small tourist shop where some "chondrites" can be found. These asteroid fragments are not very expensive and depending on the stone’s curve and condition, cost approximately over $30.

"The most beautiful ones are hidden at my home," Boudine said while smiling.

The special ones are kept aside for meteorite collectors that come from all over the world to indulge in their passion and complete their own private collections.

When meteorites fall on the dry Moroccan desert, they are preserved in their original state because they are not affected by water or damp soil.

At first Boudine did not sell the meteorites, but instead decorated his home with them. At the time he did not think they would make for a lucrative business.

As time passed, he understood there was a heavy demand for them and started selling them. It has been 20 years since his business venture first started, and it has worked well ever since.

Meteorites are priced for their size, rarity, beauty and provenance. Refusing to go into too much detail about how much he earns from his sales, he did stress that a significant profit comes from his finest pieces: up to 700 dirhams ($70) is a typical profit after having purchased them from nomads and then reselling them to his customers.

As he continues explaining his sales rituals, a man enters the room and shows Boudine two small stones that he took out of his wallet.

By looking at them through a magnifying glass, Boudine quickly asserts that there is nothing special about them. According to his appraisal, the stone's shiny reflections are the final result of the evaporation of a lake.

Leaving empty-handed, the 53-year-old site foreman was disappointed that his findings would not provide him with some extra money this time around.

In the city of Erfoud, it is estimated that 70 percent of the population lives on the extraction and sale of its geological heritage.

Ismail Mohammed, the son of a nomadic family, reflected on how the meteorite business started, in the beginning of the 1990s.

Louis Carion, a French expert and geologist who has been trading in meteorites for more than 20 years, and his father are particularly well known in Erfoud for having helped introduce the trade in Morocco.

"At the beginning of the 90s, we distributed small magnets to the nomads, some small leaflets and samples from the inside of a meteorite, so the nomads could easily distinguish ordinary stones and meteorites," Carion said.

As a result, the Carion family were one of the pioneers of meteorites in France. Mohammed said that the meteorite trade helped him and his family settle down when he was a child.

As a teenager, he was old enough to take part in the family business. Mohammed and his "numerous cousins" used to search sand dunes to find stones that looked unusual and special.

With the emergence of the fossil business in the 1970s, the meteorite business naturally benefited from the massive arrival of foreigners. As a result, Mohammed’s services as a guide became popular.

Mohammed was able to identify where meteorites could be found and began guiding geologists through the Draa-Tafilalet region. Originally focused on agricultural endeavours, it soon became a place bustling with people in search of extraterrestrial stones.

"We walked through the desert with a French geologist,” Mohammed said. Then we found some nomads' tents. The men were absent but a woman offered to sell us meteorites.

'She had hid the stone in her bra and pulled it out. The price was about $100 for each gram!'

"She offered a cheap price, something like 1500 dirhams ($150) per kilo. Once the transaction was done, she discreetly said that she had, if we wanted it, a very rare meteorite.

According to Mohammed, many nomads have been able to lead comfortable lives thanks to geological tourism, which is sometimes called the "stone rush”.

"The stone business rescued many nomadic families from poverty," he said.

Ahmad Boutsia, a 46-year-old nomad dressed in a blue tunic, is a camel herder and former meteorite seeker. Before finding a more permanent job with a stable income, he worked in the meteorite trade for 10 years. Although the meteorite trade is very profitable, it is often inconsistent.

“When I walked with my herd, I looked at the ground. And all day long I walked around the region,” Boustia said while smiling.

"I had no specific knowledge [of  meteorites], but I had a trained eye for the different stones, so I collected them when they looked unusual."

Over the years, an organised business emerged and nomads travel from the whole region to Erfoud in order to sell their stones.

"They all transit through there. Because it is a crossroads with Algeria, Mauritania, Mali and Niger. And, unlike the other countries, the sale of meteorites is legal in Morocco," Carion said.

In 2011, a rare Martian meteorite that is over 700,000 years old landed in Morocco. The beautiful rock with a black glossy surface was called Tissint after a nearby village. It is thought to be the most important meteorite to have fallen in the last 100 years, according to the BBC.

London's Natural History Museum purchased the rarity at a price which “was several times the museum’s annual acquisition budget,” The New York Times reported in 2012.

The current mining legislation in Morocco, issued in 1951, is ambiguous when it comes to the meteorite trading business.

The law states that “the activities of extraction, collection and selling of mineralogical specimens, fossils and meteorites,” should be regulated by specific provisions and regulations. However, until now no laws have been drafted to regulate the extraction and trade of meteorites.

The minister of energy, mines, water and environment refused to comment to MEE on the issue and ongoing reform negotiations.

Mohamed Boutakiout, professor of paleontology and geology at the University Mohammed V in Rabat is against the meteorite business, describing those working in the trade as a “mafia”.

Boutakiout and his organisation, the Association for the Protection of Moroccan Geological Heritage, proposed amendments to the law. Boutakiout says negotiations on the new law are taking place with government officials.

'Meteorites belong to our country, to our history and it is a great heritage for our young generation'

“We propose to create a national and regional commission to protect Moroccan heritage. This commission aims to strictly forbid the selling and exportation of any meteorites,” he added.

He proposed a hefty fine for people who try to own or trade in meteorites, which he believes should belong to the state.

"[Meteorites] belong to our country, to our history and it is a great heritage for our young generation,” he said.

He added that Morocco’s meteorites should be kept in the country’s museums and universities so that they can be studied and admired.

Carion is on the opposing side of the spectrum and believes that the trade should continue, as ending the meteorite business would impoverish the region.

"There are some Moroccan academics who are pushing for this, but if the government closes the market, people are going to starve," he said.

'If the government closes the market, people are going to starve'

Meanwhile, in Erfoud, at a coffee shop not far from the central market, Hami Tahiri, a meteorite seller, does not hesitate to express his disdain for the plans. He said that the government has already begun to distribute leaflets indicating sales restrictions for certain types of stones.

"It is bad sign. If they prohibit us to do this, what will the people here do for a living? There are three [main] professions here: dates, stones, and sand.”