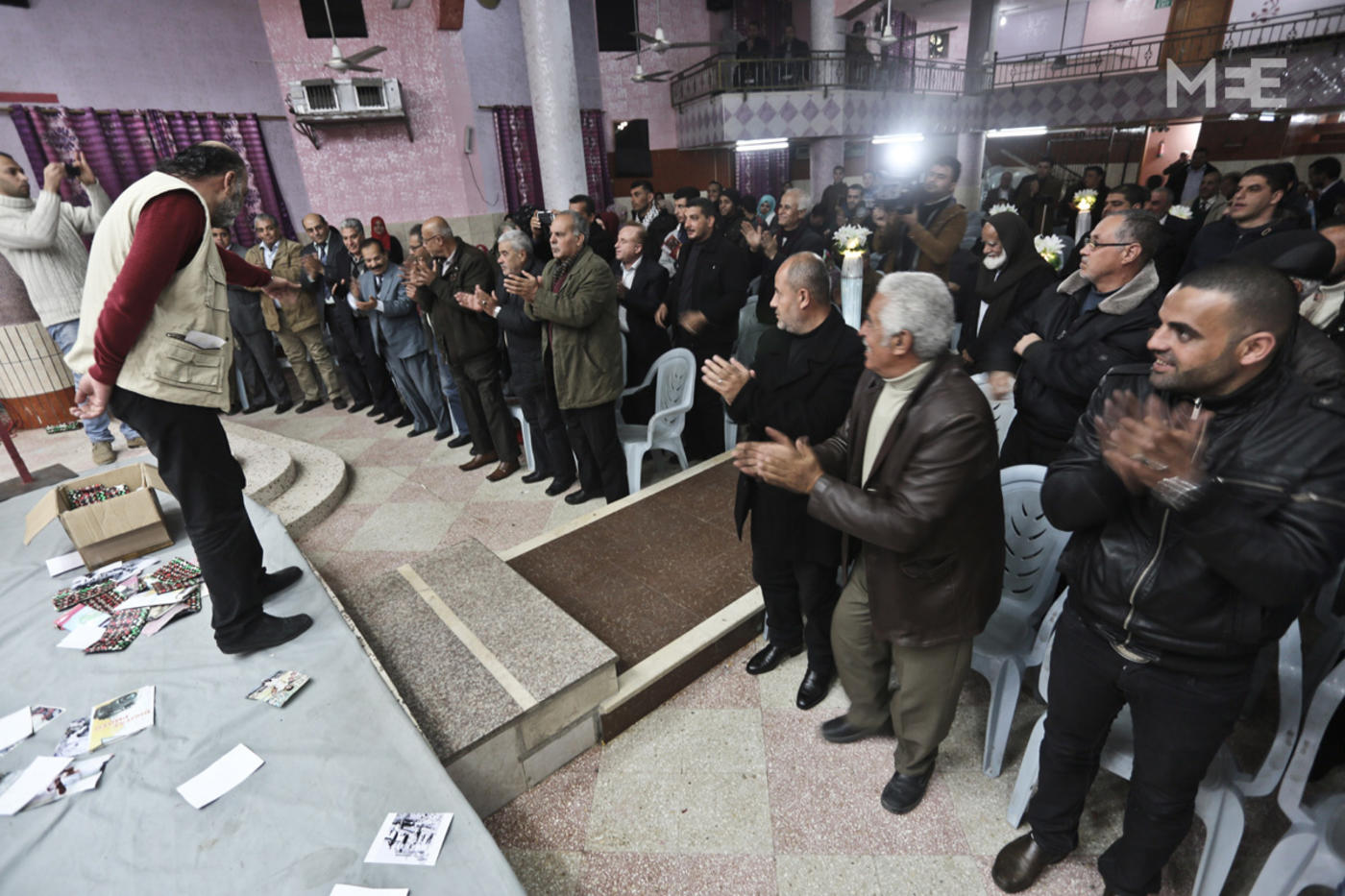 The room is packed with people and the air grows humid and thick with anticipation. To see such huge numbers of people coming together from across the Gaza Strip is a rarity. Men, women, children, teenagers, artists, political leaders and religious figures - all are gathered together at Al Mishal Theatre Hall, awaiting the opening of a monodrama entitled The Photographer.

No-one knows exactly what to expect, but all are here hoping to escape, to find some light comic relief perhaps and a chance to laugh in the face of the heavy burdens of life under the Israeli-Egyptian economic blockade of Gaza - if only for an hour.

The play is inspired by the lives of real people and events in Gaza. The moment the actor, Ali Abu Yassin, appears on the stage, the audience falls silent.

The first scene opens with Yassin, who plays the photographer Darwish Al-Yanfawi, at home by the Mediterranean Sea shore in one of Gaza’s poorest and most densely populated refugee camps - the Shati camp.

On stage for an hour, Darwish (Yassin) captivates the packed theatre as he narrates the painful story of a land called Palestine, its nationals, including the people of Gaza, who over the last 50 years have experienced displacement and fragmentation from their homes and fellow Palestinians.

The story begins as Darwish is asked by Madam Soma, a woman in his neighbourhood, to look for a photograph taken some years before of her son Atallah before he was killed in 2014. Atallah, her only child, was killed while having a swim on Gaza’s beach when Israeli warships opened fire on him.

In looking for the photo, Darwish’s fingers flick through all the images he has taken over the last 50 years living inside the refugee camp.

Darwish seems to be a man much troubled, heavy with the burden of living under occupation, yet full of joy, love and commitment to his people. His character appeals to the audience - passionate and bold, sweating on the stage set, he goes into great details of narration using each photograph, as well as images hanging on the walls of his small studio, and windows that open onto the beach.

“Darwish is like Gaza: everyone let him down, but despite all of this he is able to live, breath, dream and rebel,” the play’s author, Dr Atef Abu Saif, tells MEE.

Dr Abu Saif, who studied English literature in Birziet University, grew up loving storytelling, which he learned from his grandmother Ayesha, who died with the eternal hope of returning to her hometown of Jaffa.

He has written several novels in Arabic and one book about the Gaza war, completed his MA in Europe and is now preparing for his PhD in political science.

Darwish, the author explains, goes through “a journey searching for the Palestinian identity through history and socio-political reality, in a way to discover the transformations which have emerged on the Gaza Strip during a period of half a century.”

Dr Abu Saif told MEE that he wanted the play to generate a more positive outlook among all those who may have lost hope in their right to return to their nation, identity and freedom.

“The character of Darwish is there, in every human being and within each Palestinian home,” he says, before pausing to shake hands with scores of theatre-goers waiting to meet him. “Darwish represents the Palestinian prisoner, and those injured and killed during the wars.”

The play asks some critical questions of Palestinians - ones that only they can answer. It also raises questions about the intra-Palestinian division which, Dr Abu Saif says, has humiliated Palestinians and weakened their standing in the world. It raises the question of how brothers fight for token power while being occupied, yet forget and neglect the real united resistance.

“Does our situation, as Palestinians, currently deserve more people being killed, injured, more prisoners and people who have lost their homes?” Dr Abu Saif asks.

The play ends with Darwish unable to find the specific photo he was searching for – and yet he succeeds, within an hour, to bring into sharp focus the history of the refugee camp and its inhabitants.

His imitation of broken Arabic combined with Hebrew triggered howls of laugher, amusing the audience by imitating the tone of Israeli soldiers threatening his work as a photographer, as he attempts to take shots of Fedayeen activists during the Intifada.

The play closes with him throwing away all his photographs in a hysterical outburst of frustrated resistance to the futile effort and hopeless situation. Darwish screams: “Who told you that life is about a photo? Life is bigger than a photo.”

Professor Mohammed Al-Boji, theater critic and analyst, who attended the performance, stood in disbelieve when he saw the audience’s reaction. “This is something I have not seen in the big capitals of Arab culture - whether Cairo, Amman, or any other Arab capital. You simply cannot find such a massive audience of youth, elders, young women and children,” he says.

In his analysis, this has two meanings, “Either the society is going through massive depression and pressure and find this as a way to escape somewhere and feel a sense of freedom, or Palestinian society has a great love of life and art in all its forms, and like to see themselves within the staged play.”

In the view of Al-Boji, Darwish has added so much to the text, not only by memorising it, but by giving sincere expression to it, since he happened to be living in the same refugee camp scripted in the drama.

At the end of the performance, the audience erupts in enthusiastic applause. Some come forward to congratulate the actor.

The play has a profound impact on some in the audience. “At some points, I could not believe that I was still in Gaza,” says Sarah Bakri, a 21-year-old medical student. She knew from her friends that she would be seeing something special and unique, but she never imagined it would make her reflect so deeply on her life, her relatives’ history of pain and the history of Gaza prior to her birth.

As a native of Gaza, she goes on to say, she never thought she would be here, sitting and enjoying a one-man drama in a crowded theatre. “This is my first experience of attending a play in Gaza,” she says of this unusual gathering in a territory under siege.

“The great actor, Yasin, has made us cry deeply, and he made us think deeply about Gaza and reflect upon many families we know," says Hesham Saqallah, a wheel-chaired Palestinian in his late 40s. “After all, this was not a foreign play, it is a story about us - our own narrative.

“We, as Palestinians, have a narrative to tell, filling the theatres of Paris and London and all other cities of the civilised world – yes, we come from under the ruins of demolished houses, but we can tell the world that we have our culture, and still rise, like an old bird, from among the embers of fire to see our beautiful cultural reality,” adds Saqallah, who lost his house in Gaza during the 2014 war.

After the performance, Yassin receives the crowds waiting to congratulate him and thank him for bringing Gaza’s new generation into the world of imagination, dreams and theatre - something that harsh life on the streets leaves no room for.

One young woman shakes his hands, clearly moved by the entire production. “I feel it in my blood," she says "I feel that I am shaking the hands of freedom.”