Qataris express love and defiance on the streets of Doha

In Doha, last Sunday, thousands of Qataris gathered on the corniche to celebrate the emir amid a four-month siege by neighbouring states 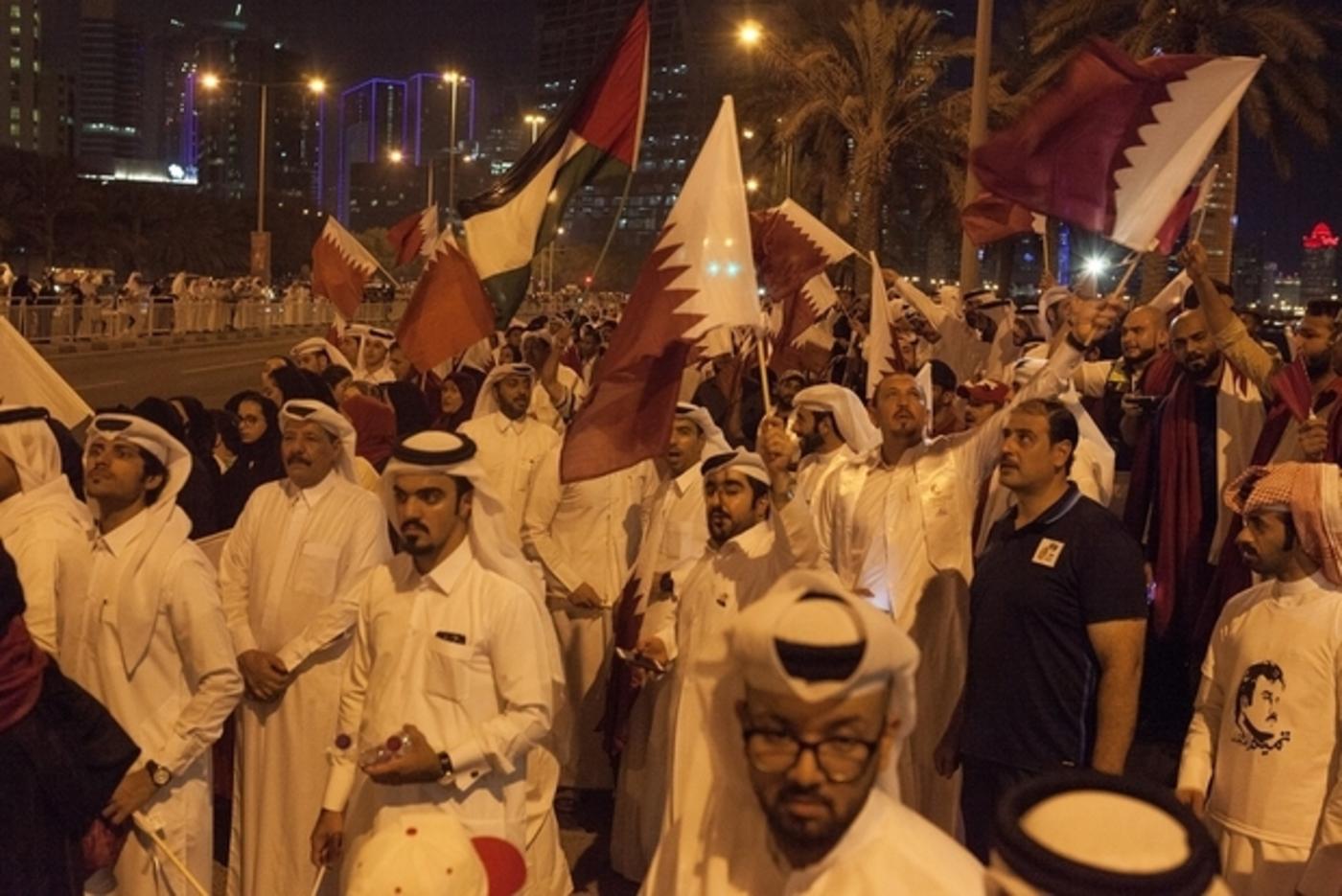 DOHA – A warm wind caresses skyscrapers standing tall in the central business area of West Bay, in Qatar’s capital city, Doha. Men wearing the traditional white dishdasha and women dressed in black abayas flood the streets in large groups to welcome the emir of Qatar back home after his first overseas visit since the Gulf dispute erupted in June.

On 24 September, some expats, who represent around 90 percent of the population, joined the Qataris, who gathered to show their support to the country's ruler, Sheikh Tamim bin Hamad al-Thani, as the political crisis pitting Qatar against the Arab states continues.

Abdul Aziz, 42 years-old, has long waited to publicly express his support for the emir. "I was very impatient. I waited for this gathering as we wait for a marriage ceremony," he told Middle East Eye.

A professional photographer, Aziz, admits that the blockade imposed by "the country's brothers" psychologically affected him. He stopped working a few days after it was imposed and struggled to sleep through the night.

"That all our cousins and brothers, would do that to us [was shocking]. I tried to make the distinction between the political decisions of the leaders of these countries and of what I really think about the populations of Saudi Arabia, the Emirates and Bahrain. But I cannot."

Every year, Aziz would send his warmest greetings to his Saudi neighbours on their national holiday, which falls on 23 September.

"On Snapchat, I used to congratulate Saudi friends every year. This year, I started to write a snap, then I erased everything," he said.

On 5 June, Saudi Arabia and the UAE severed all ties with Qatar, accusing it of supporting groups, including some backed by Iran "that aim to destabilise the region". Egypt, Bahrain and other allies followed. Qatar denies the allegations and says that the siege aims at neutering an independent foreign policy which promotes peaceful regional reform.

As well as cutting diplomatic ties, Qatar's neighbours closed their air space to Qatari carriers and blocked the small but gas-rich emirate's only land border, vital for its food imports, representing the worst rift in years among some of the most powerful states in the Arab world.

"This crisis in Qatar strengthened the doubts I had about our country. We must be less dependent and we have to produce locally. We import too much," Hamad al-Amari, a famous Qatari comedian who joined the crowd, told MEE.

"It is an attack against the sovereignty of Qatar. Our relations with our nearby countries will never be the same as before because they broke lives," he added.

Saudi, UAE and Bahraini citizens were given 14 days to leave Qatar, while Qatari nationals were also asked to leave these countries.

According to a report issued by Qatar's National Human Rights committee in July, the siege has split hundreds of families apart.

Fatima al-Chamira is a Saudi national, who studies chemical engineering at Qatar University. The 23-year old, who has a Saudi father and a Qatari mother, said that she spent her entire life with her family in Doha.

My life is here, my heart, my studies. If I go over there, I have no university, no family. In Saudi Arabia, I just have a passport

When the Saudi government called on its citizens to leave Qatar and return back to Saudi, al-Chamira refused, at the risk of losing her Saudi nationality. Like several Arab Gulf countries, it's a common practice that the children can inherit only their father's nationality.

"What is over there for me? Nothing. They say that I am going to lose my nationality but my life is here, my heart, my studies. If I go over there, I have no university, no family. In Saudi Arabia, I just have a passport," she said.

The young woman said that she decided to join many others who gathered to thank the emir "who protects us and considers us as Qataris".

As the estimated time of the emir’s arrival grew closer, the crowds grew more excited. They waved the Qatari flag, danced on top of cars and children wore T-shirts depicting the ruler's face.

At around 7.30pm, the emir arrived in a car covered in rose petals. He waved his hand to greet the crowds, as his convoy moved ahead slowly and the people shouted his name in praise and waved the national flag. 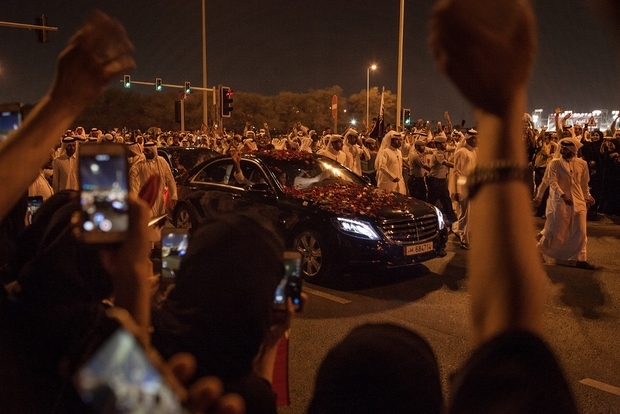 The emir had arrived back from a diplomatic tour that included visits to Turkey and the United States, where he spoke at the United Nations General Assembly in New York. In a speech at the UN severely criticising the four Arab states' conduct during the dispute, the emir said that the countries were inflicting damage on the "war on terror", adding that Qatar "refused to yield to dictations by pressure and siege".

He also renewed a call for "unconditional dialogue based on mutual respect for sovereignty". 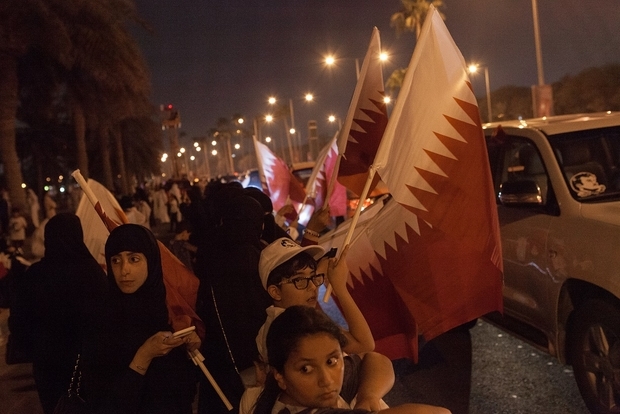 According to Nabil El-Nasri, author of L'Énigme du Qatar, (The Enigma of Qatar) and director of of L’observatoire du Qatar – a Paris-based centre specialising in Qatar and its foreign policies, "ninety nine percent of the Qataris stand behind the emir in the face of [regional] rivals and envious foreign powers."

- Nabil El-Nasri, author and director of of L’observatoire du Qatar

“Over time, the crisis is going to settle down," he explained. "Qatar seems to be ahead in preserving its image. We still have months, even years [before the dispute is resolved] because it is a war of egos and the United Arab Emirates and Saudi Arabia will never admit their defeat; they are going to keep maintaining pressure [on Qatar].