Refugee 4 Refugees: Syrian swims to Greece and creates NGO to help others 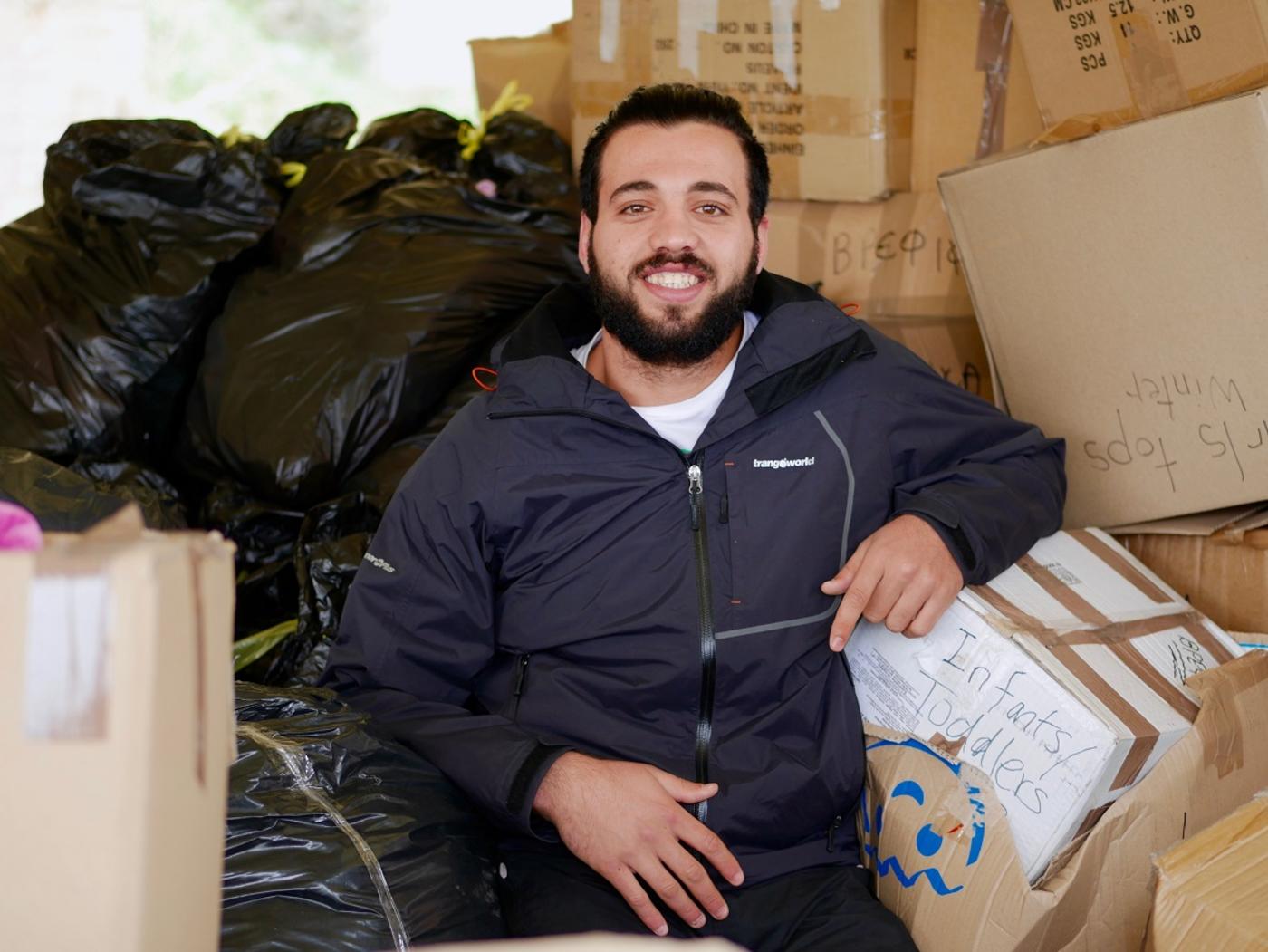 Omar Alshakal, founder of Refugees 4 Refugees, sits with boxes of clothes and toys going to refugees in Syria and Turkey (MEE/Ryan Harvey)
By
Ryan Harvey

LESBOS, Greece - Omar Alshakal's shoes and trousers are soaking wet by the time the rubber boat gets to the shore. Several hours have passed since it has been dangerously pushing towards Greece over the swells of the Aegean Sea from the Turkish coast. With each crashing wave, the boat took on a bit more water.

As he stands knee-deep in the blue waters of Lesbos, he is reminded once again of what it feels like to risk one's life when fleeing one's homeland. The thought of drowning in the dark of night in the pursuit of safety is one that is all but familiar to him, for he is a refugee too.

Yet Alshakal's story of crossing the Aegean is not common among the tales of survivors, because he took the scariest route of them all - he swam.

Now based on Lesbos, Alshakal has recently launched his own relief NGO to provide humanitarian services to refugees arriving on the Greek islands. Through Refugee 4 Refugees, Alshakal seeks to create an organisation that addresses the needs and concerns of refugees, while also encouraging other refugees to get involved in their work.

'We know their situation, we speak their language, and we have been in their position. So we know best how to support them'

Additionally, the NGO will also provide assistance to people still living in Syria, and has begun collecting clothing and toys to send to refugee camps in the region. Its first shipment went out earlier this month to children in Sanliurfa, Turkey, and it is currently fundraising to help buy a mountain-capable vehicle to offer support on Lesbos’s remote and rocky landing sights.

Alshakal's chosen path in assisting refugees does not surprise those who know his story. It started in 2011, when he became one of the countless people who joined demonstrations inspired by the Tunisian and Egyptian revolutions.

During one early protest in Deir-ez-Zor, Alshakal's hometown in eastern Syria, he was arrested and imprisoned, and throughout that month and a half, beaten countless times.

“I know what happened in there,” Alshakal said in a recent interview on Lesbos. “I know why the people went to the streets. Believe me, when I was [in prison], I saw a lot of people die. They beat people to death,” he said.

'I know why the people went to the streets. Believe me, when I was [in prison], I saw a lot of people die. They beat people to death'

After his release from prison, he started using his car as an emergency vehicle to help drive the injured to hospitals.

After a few months, Alshakal said that his car was peppered with machine-gun fire shot by pro-Assad forces and the car was ruined. But Alshakal's reputation with the hospitals resulted in the offer of an ambulance.

“Many people at the hospital were afraid to drive,” he said. “But I didn’t care if I died at that time.”

In May 2013, a bomb landed near his home during an air force raid in his neighbourhood. He and a friend jumped into his vehicle, and they squeezed in six injured people. They began making their way to the hospital, but they only made it 100 metres.

“I think the bomb hit just behind us,” he described. "My friend was killed in the car, along with the other passengers. I managed to get out, but my leg had been hit with a piece of shrapnel.“

The grave injury put Alshakal in a wheelchair for many months and finally led him to leave Syria to seek medical care in Turkey.

Alshakal never planned on becoming a refugee, and his decision to swim to Greece happened one afternoon after a medical visit to a Turkish doctor, while taking a brief trip with two friends to a beach near Bodrum, on Turkey’s southeast coast.

The doctor suggested that if he really wanted proper medical care, he should consider getting himself to Germany. Others were making their way there as well, he explained.

So the initial plan was born: Alshakal would get his leg fixed, then he would take a few days at the sea to relax with his friends, and finally, they would return to Syria.

He recalled the turquoise and dark blue swells of the Aegean, and the hazy hills that stood against the sky, as small fishing boats drifted peacefully in the afternoon sun.

“You see those hills?” a man told the group as they stood on the beach in Bodrum. “That’s Greece.”

“That’s Greece?” Alshakal asked, prodding for further confirmation. He didn’t believe him. “I thought he was bullshitting us,” he said with a laugh.

Alshakal's lack of fear is perhaps a blessing and a curse. Yet either way, it was present when he first suggested the group swim to Greece.

'Many people at the hospital were afraid to drive...But I didn’t care if I died at that time'

Alshakal knew he could make it. He had been a lifeguard and swimming instructor while living in Lebanon, and his friend was also a strong swimmer. However, the third member of their group was older and not in good physical shape. But he wanted desperately to get to Europe and begged them to take him along.

After buying flippers, snorkels, goggles and a life jacket for the older man, the group returned to Bodrum's shore. By sundown, after only a few hours of planning, they began swimming towards Pserimos, a small, uninhabited island off the coast of Kalymnos, Greece.

With his injury still pulsating through his thigh, Alshakal swam powerfully with one leg. At one point after sundown, a fin popped up behind them. “I was sure we were going to die then,” Alshakal said with a smile, as he thought they were going to be attacked by sharks. But it turned out to be a group of dolphins.

After 14 hours, they somehow made it to Kalymnos. “A police boat intercepted us before we could get to the beach," Alshakal said.

“We tried to explain to them that we were from Syria, but we spoke no English or Greek. They were so confused,” he added.

The group of friends eventually made it to Athens, where they immediately planned their journey to Germany, but the endeavour to reach Europe was harder than anticipated.

Heading north, Alshakal failed three times to smuggle himself through the border of Macedonia. Due to his leg injury, running was difficult. When he and his friends tried to cross the border, he was caught, but his friends escaped.

Back in Athens, he found himself sleeping on the streets with a group of fellow Syrian refugees.

To obtain his European papers legally and get to Germany through proper channels, he would have to wait there eight months until the paperwork was ready in May 2015.

Alshakal eventually settled in Rostock, Germany, where the government provided him a place to live. While there, he spent his time volunteering as a cook for a local NGO that supported refugees.

Nine months passed, and then his life was turned upside down again.

“I opened my eyes and had a gun to my head,” Alshakal recalled. “I didn’t think they were police, because they weren’t wearing police uniforms... I thought they were from a mafia.”

After being taken to the police station where he was held for a few hours, he was asked questions about the Islamic State group (IS).

'I opened my eyes and had a gun to my head'

With doors now closed to him, he could not access the social services office until his legal problems were solved. Friends distanced themselves from him and his phone and papers were confiscated. “I couldn’t sleep, I felt like I was going crazy,” he said.

After one month, a letter came in the mail. It was an apology from the police explaining that Alshakal had been cleared. He had been picked up on false pretences.

For two more months, Alshakal stayed in Rostock, but his anger at the situation and his desire to get back to Syria to help his people led him away from what could have been a comparatively normal European life.

He decided to return to Greece to see some friends before figuring out how he would head back into Syria.

It was early 2016, and dozens of boats were still arriving on the Greek islands daily. Refugees were now being placed in detention centres for deportation and were being subjected to further humiliation at the borders of Europe.

In Athens, Alshakal learned about the anarchist project Platanos, a volunteer relief group on Lesbos, and decided he would go and participate while he figured out his plans. Yet when he realised the extent of the situation there, he stayed on to volunteer indefinitely.

After bouncing around a number of relief organisations, Alshakal became a certified lifeguard and then a coordinator for an NGO.

“We know their situation, we speak their language, and we have been in their position,” Alshakal tells me. ”So we know best how to support them.”