When they are not rescuing people from the sea off Lesbos, volunteers teach nervous survivors to swim without fear 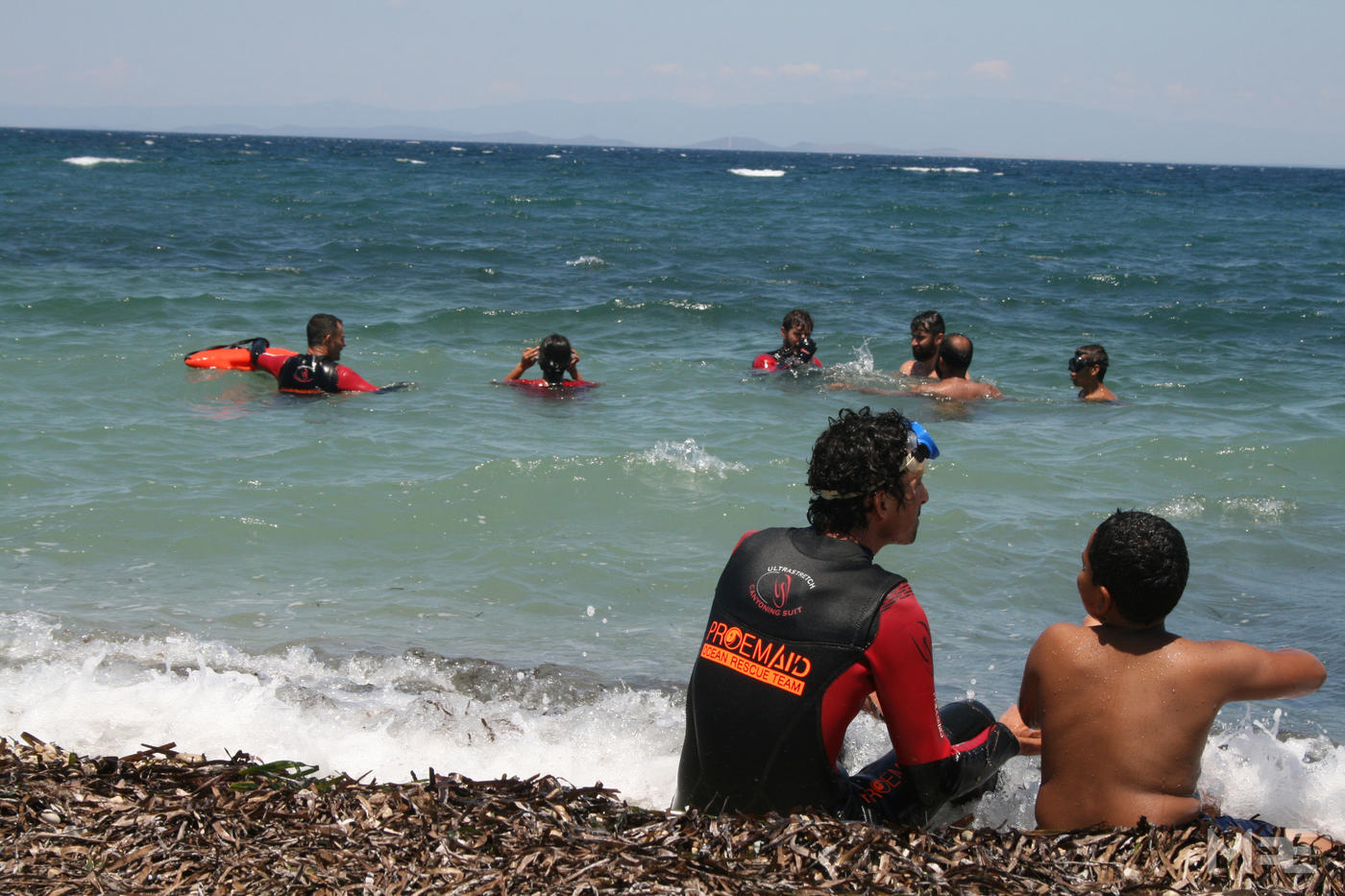 LESBOS, Greece - Three times a week in a refugee camp in Lesbos, a crowd of children wait excitedly for a vehicle to pull into the driveway. Clutching swimming goggles and wearing brightly coloured backpacks, the children erupt with joy as a team of Spanish lifeguards appear in an orange four-wheel drive.

Living in limbo on Greece’s third-largest island, the lifeguards’ arrival signifies a brief respite from claustrophobic camp conditions. At the same time, something more therapeutic is about to take place.

Swimming lessons that are making a real difference are currently taking place on a small section of beach on the island. The project is being run under the title "Reconciliation with the Sea." Three times a week, the two hours of teaching, fun and healing are co-facilitated by Spanish search and rescue NGO Proem-Aid and Christian Peacemaker Teams - Europe.

A visible transformation takes place in the children and adults who participate. Limbs loosen, nervous grins turn to laughter and those initially watching from the side-lines gradually become bolder.

As fun as the one-to-one swimming lessons are, there is a deeper intention behind the gatherings beyond just lighthearted entertainment, and uninhibited fun with inflatables. They are an attempt to facilitate healing and improve the well-being of those who often bear the emotional and physical scars of war.

For many who have endured terrifying journeys across the Mediterranean in the quest for safety, the aim is to restore confidence and help build new relationships with the sea, while they await their fate on the picturesque island.

From the shores of Lesbos, the purple shadow of Turkey’s mountainous coastline looms ominously over the short but deadly route between the two countries. On a hilltop overlooking the capital city of Mytilene stands a shocking reminder of the tragedy.

In the "graveyard of the unknown," rows of marble plaques mark the graves of those who lost their lives undertaking the treacherous crossing. Many are simply inscribed with a date, their gender and presumed age.

Hundreds of volunteers from all over the world have gathered on Lesbos to bring aid and comfort to migrants and refugees since they began arriving on the island. Francisco Garcia-Sanchez is a member of Proem-aid, one of a number of organisations conducting rescue operations on the perilous route, in addition to the Greek coastguard and EU border control agency Frontex.

The 31-year-old specialist firefighter from Catalonia is part of a group of volunteer lifeguards who pay their own way and operate in two-week shifts. On call 24/7, Proem-Aid currently operates the only search and rescue boat in the south of the island. For Sanchez, the ideal scenario is that the inflatable boats make it to the shore, but often they do not due to being poorly made and overloaded with people.

Although arrivals of refugees on Lesbos have decreased dramatically in recent months, boats are still washing up regularly in the north of the island. To keep active when not conducting rescue operations, Proem-aid has established "Reconciliation with the sea" and Sanchez explained why. “Often those who arrived on Lesbos by boat had never seen the sea before, so the only experience they’ve had with it has been a traumatic one,” he said.

The children are often less scared than adults, he added: “Their mentality is different, they enjoy playing and don’t always understand the dangers of the sea. Adults do and so are often more afraid.”

Lola, who is in her mid-30s, is a prime example of an adult who had developed an understandable fear of water. After fleeing violence from Nigerian terror group Boko Haram, she flew to Turkey and paid $1,000 to a smuggler for the 10-mile sea journey to Lesbos. In the dark of night, she was crammed into an inflatable boat with around 40 others. Many of who, like her, were unable to swim.

Attempting to fill the long hours waiting for her papers to be processed, Lola tentatively joined "Reconciliation with the sea." Clearly nervous, she trailed behind the rest of the group as they walked to the beach. After changing in a cubicle, she hovered at the edge of the water. It was only the second time in her life she had been in the sea.

Despite the intense heat, the wind was strong and the sea was choppy. Sanchez and his colleague sensed Lola’s fear. Undeterred by the language barrier, the two lifeguards devoted the session to gently encouraging and supporting her in the water.

After a few attempts, with a lifeguard on either side and buoyancy aids for balance, Lola eventually took her feet off the ground, kicked her legs and swam. Over an hour later when she reluctantly clambered out of the water, she was grinning from ear to ear, immediately demanding to see photos of herself in the water. It was as if she could hardly believe what had just happened.

Forced to flee Syria, Issa, his parents and five siblings also survived a brush with death during the journey from the Turkish coast wearing fake life jackets. Although the children used to swim in Syria, the horrific Mediterranean crossing instilled in them a fresh and intense fear of the sea.

Refusing to bow to their anxieties, the resilient siblings got straight back into the water. Ever since their arrival on the island, they are often the first in line waiting enthusiastically for Proem-aid’s arrival.

For Issa, the presence of the lifeguards and their equipment makes him feel safe and his fear diminishes with each session. During each lesson he tries to go further out to sea and has even begun swimming underwater. As the squealing siblings run boldly in and out of the waves, it is hard to imagine that not long ago they were being plucked from the very same sea.

Suddenly there was a hole in the boat

Despite being fiercely shy and remaining apart from the rest of the group, Katrin looked confident in the water and spent the entire session happily playing in the waves on her own. The 14-year-old from Afghanistan said she learnt to swim at the age of six. Recalling the family’s terrifying boat journey to Lesbos, she said, “It was really scary. The weather was stormy and the boat was really overcrowded with 45 people in it. Suddenly there was a hole in the boat, and people started freaking out.”

Despite the boat slowly filling with water, the overwhelming fear of those on board was that they would be caught by the Turkish coast guard and sent back to Turkey. Katrin said hardly anyone on board could swim and the majority were women carrying babies. “There was even a man with no legs,” she added. Although they all had life jackets, they were of bad quality. “Even the smuggler said ‘if you fall into the water, the maximum you will last with this is one hour,'" she said with a grimace.

After being rescued by the Greek coastguard, Katrin’s family joined thousands of others on the island waiting for the long and chaotic registration process. She is adamant that she does not want to stay in Greece but wants to go to Germany and continue her education. Claiming the horrific journey has not affected her confidence in the water, Katrin said confidently, “When I was on the boat, I was scared because it was so dangerous, I thought I would drown and panicked. I was very afraid then but I’m not now.”

Asked if there is anything she would like to say to the world about her situation, the teenager was unhesitant; “I just want to say that refugees from Afghanistan and other countries are not coming because of the economic situation. There may be some among them, but most are not coming for these reasons.”
Like thousands before them, her family has been forced to leave their beloved homeland behind in a desperate search for safety and security. In Afghanistan, a dramatic increase in suicide attacks, bombings, kidnappings and other atrocities means the number of civilians killed last year was at its highest since the US invaded the country in 2001.

Calmly and with wisdom beyond her years, Katrin continued: “I really wish people would investigate instead of being prejudiced.”

*The names of interviewees have been changed, as well as the camp where they are located, to protect identities