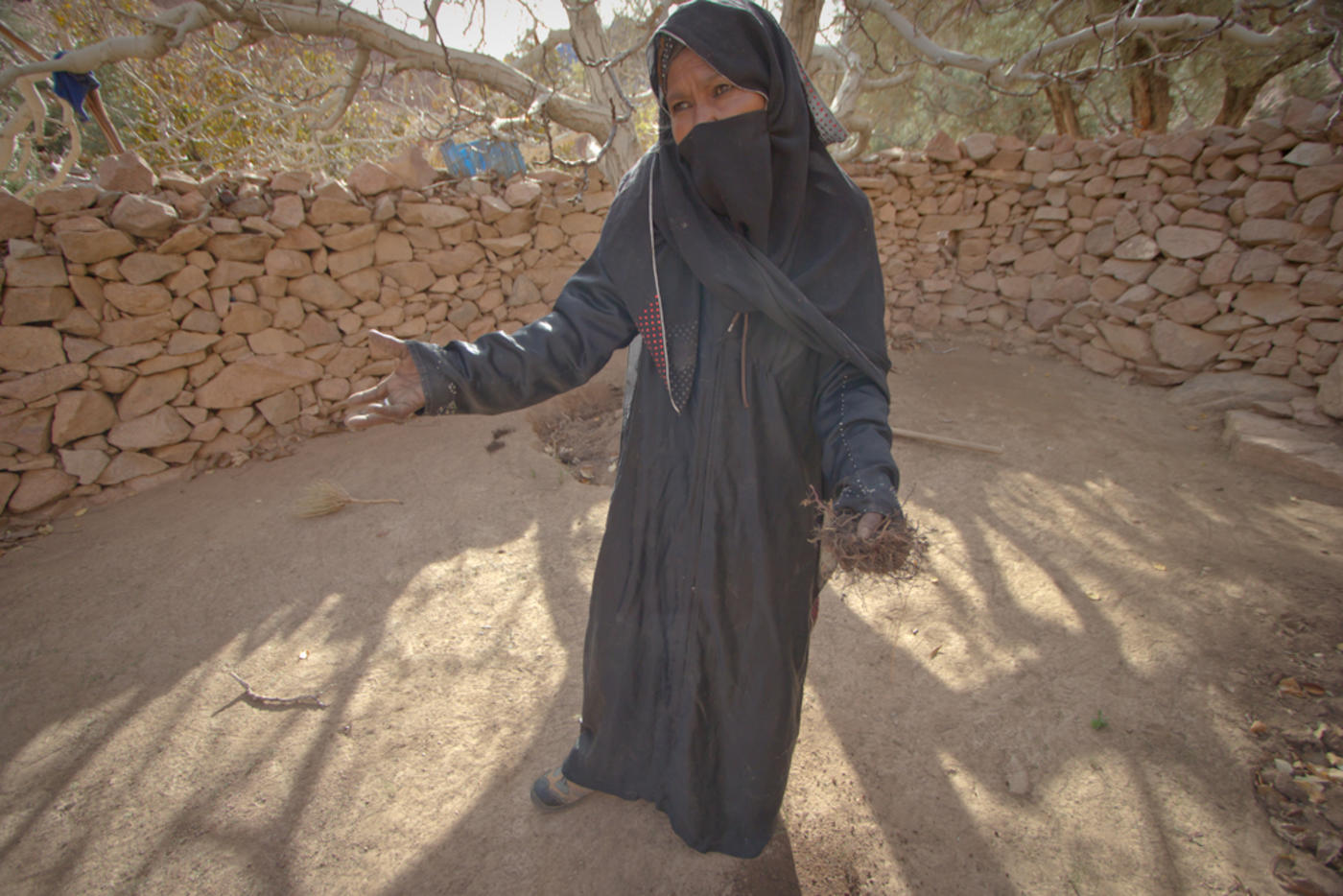 Medicine woman Amariya in her orchard (Bryony Dunne)
By
Hanan Chehata
Orchards conjure notions of lush fruits, the industry of nature tamed, and row upon row of trees. Not so. The orchards of Sinai are rocky, brown and to the untrained eye, not orchards at all but wild, abandoned gardens set among barren tracts of land. Sinai, too, is a world away from the war zone fashioned by brutality, so routine that it has become banal -  the collective punishment of homes razed to create buffer zones, the trade of the Apache helicopter strikes and suicide bombs. The Sinai valleys depicted here are tranquil and offer faint echoes of a way of life long gone.
The Orchard Keepers confounds expectations. It is a tantalisingly short documentary about the lives of two elderly Bedouin who have chosen to become guardians of the orchards of Sinai.
Amariya is a 70-year-old medicine woman who, after raising seven children and living a typically sociable Bedouin existence, decided - at the age of 65 - to move to the mountains alone to care for the wild herbs and plants growing there.

We are also introduced to a second orchard keeper, 73-year-old Dr Ahmad, who has made his home in the arid scrublands of Sinai, about three hours away from Amariya's mountain garden. He too has dedicated himself to keeping the orchards alive and curing locals with his organic herbal Sinai remedies.

In her short documentary, Irishwoman Bryony Dunne shows us a world accessible only by foot. The valleys at the heart of this film are inaccessible by vehicle and can only be reached by a 10-12 hour walk from the nearest village.

The camera follows Amariya as she nonchalantly talks about watering her gardens while walking precariously along the edges of rocky cliffs and craggy hilltops, seemingly unaware of the risk to her life if she puts one foot out of place. You almost hold your breath watching her, both in awe of her sprightliness and in fear for her safety. She continues talking confidently as she makes her way down a mountainside alongside her equally sure-footed goats, which scramble along beside her.

Even when reaching the foot of the hills, her goats continue to follow her around like pups to heel as she makes her way across the harsh land. An element of slightly comical value is added by the jaunty soundtrack which was composed by a Palestinian friend of Dunne's, Akram Al Sharif.

Amariya explains that it was after witnessing wars and seeing people struggling to survive with no food that she decided to care for her own garden. She is clearly in love with nature, and her orchard specifically, speaking in lilting tones of the walnuts, figs, almonds and grapes of her valley. She talks to her plants lovingly, apologising to the mint shrubs for not having visited for a few days, whispering to them "be green; be greener".

What to us looks like a barren patch of dry land with assorted pale shrubbery sprouting through the dust is a source of constant wonder and joy to her and she scours her valley daily for basil, mint, wormwood and thyme, cutting the tiniest snippets from some of their bushes, being careful not to uproot them or take too much; just what she needs.

As she picks at the various leaves and stalks she identifies which plants are cures for which ailments, seemingly happy to have the chance to impart some of her knowledge of traditional medicinal herbs to Dunne, who is hidden behind the camera throughout. This one is good for kidneys, that for the head, coughs, colds, diabetes, low blood pressure, Amariya says handling each, adding that anyone who feels sick should "come to my valley". "The mountain is my doctor" she says.

Already cutting an impressive figure, seemingly in defiance of her advanced years, there are shots of Amariya having climbed into the branches of some low-hanging trees, gathering twigs to make a fire on which she then cooks her dinner in the open air; a meal made from the very plants she cultivates.

The film then cuts away to provide a portrait of another Bedouin orchard keeper: Dr Ahmad; one of the region’s last surviving herbalists.

Ahmad collects wild mountain plants and says that the largest and most important collection of medicinal plants in all of Egypt grows in Sinai.

He collects discarded tin cans from the garbage to make fertiliser for his trees, explaining that he adds sand to them and buries them near the roots so that the nutrients and bacteria dissolve into the soil.

Having lived through droughts and having seen the damage they wrought, Ahmad is keenly aware of the importance of water, especially in such an arid part of the world. Ahmad spends three to four months digging, using crude tools and a bucket, in order to dig wells which are anywhere between 40-60 metres deep. He says it's hard work, but he’s patient and it pays off in the end. He’s happy to dedicate so much time to this backbreaking endeavour knowing that when the next inevitable drought hits, it will all be worth it and his plants will survive.

Only after watching this film can one understand why Dunne went from visiting Sinai to do research for a Masters degree at University College Dublin - which was meant to take just a month - to doing a photography project, to making a documentary, and now on to a new life altogether, teaching photography at the German University in Cairo, where she has moved and  lived for over two years. She has clearly been charmed by the land and the people who live there.

“This experience changed the whole direction of my life”, Dunne admits, “especially creatively."

She fondly describes the landscape as being captivating "almost like you are on the moon. It’s one of the most dramatic landscapes, day and night.”

Although no real political context is given in this film - which is one of its drawbacks, since it makes it seem as though Sinai exists in a vacuum - you cannot help but watch this knowing that, in the current political and regional climate, life may not remain at this same steady pace for these nomadic people for much longer.

The orchards are a rare sight to behold and tourism is practically non-existent in an area which Dunne says deserves more visitors. Bryony explains how the land is a perfect location - in theory - for eco-tourists with fantastic trekking and camping opportunities, organic fruit and fresh vegetables. Yet it is practically impossible now and virtually no independent tourism is taking place. The region is pretty much a no-go area for many with the nearest tourists in Egypt probably in secure compounds in Sharm El-Sheik.

After watching Dunne’s film one may be left with the impression that the care of these orchards are in safe hands, but Amariya and Ahmad are not typical Bedouin. As the filmmaker explained at a film screening of her documentary in London, the majority of Bedouin have now adopted a more modern lifestyle with conveniences like four-wheel drives, which cannot even access the mountainous valleys. They also often have multiple sources of income and the meagre revenue generated by the orchards simply would not suffice many who have chosen to opt for more comfortable, albeit still semi-nomadic lifestyles.

Even Amariya herself admits that she is of a hardier breed than most, saying that modern Egyptian women would not be able to survive the way she does. She entreats Egyptians to leave aside any fighting and to "come back to the land" and re-familiarise themselves with nature. She also urges parents to teach their children to work the land and to love it.

Around 80 percent of the orchards of Sinai are believed to have been abandoned now and there's no way of knowing for how much longer Amariya and Dr Ahmad will be able to keep tending to their gardens. After filming ended, Dunne said, Amariya fell while walking in the mountains tending to her goats and injured her back very badly. Her family took her to a village for treatment, but not surprisingly, she demanded that she be allowed to return to recover in her orchards.

As long as they are physically able, and possibly even after that, the orchard keepers of Sinai will continue to be the guardians of that ancient, natural habitat, preserving what they can for a time when perhaps more people will appreciate the value of the land and return to its custodianship.

The film is short at 28 minutes and leaves the viewer wanting to know more, not only about the orchards themselves and the other guardians who live there, but about the historical and cultural significance of this land too. It seems as though the land has just been abandoned by the government and leaves many questions unanswered. It provides a wonderful microcosm of the region and it's only because it's such an intriguing glimpse into an unknown world that the viewer is left wanting more of a macrocosm showing the bigger picture as well.

The film is currently being shown at a variety of film screenings and will be available online soon. For more information visit the website for the Orchard Keepers at: http://www.theorchardkeepers.com/press.html Sinai Crisis
The ‘great war’ of Sinai: How to lose a ‘war on terror’
Ramzy Baroud