Rival brothers: The Kurds who join the Islamic State

From Kobane to Tal Abyad, the Kurds are on the frontline against the Islamic State - but IS is managing to recruit behind enemy lines 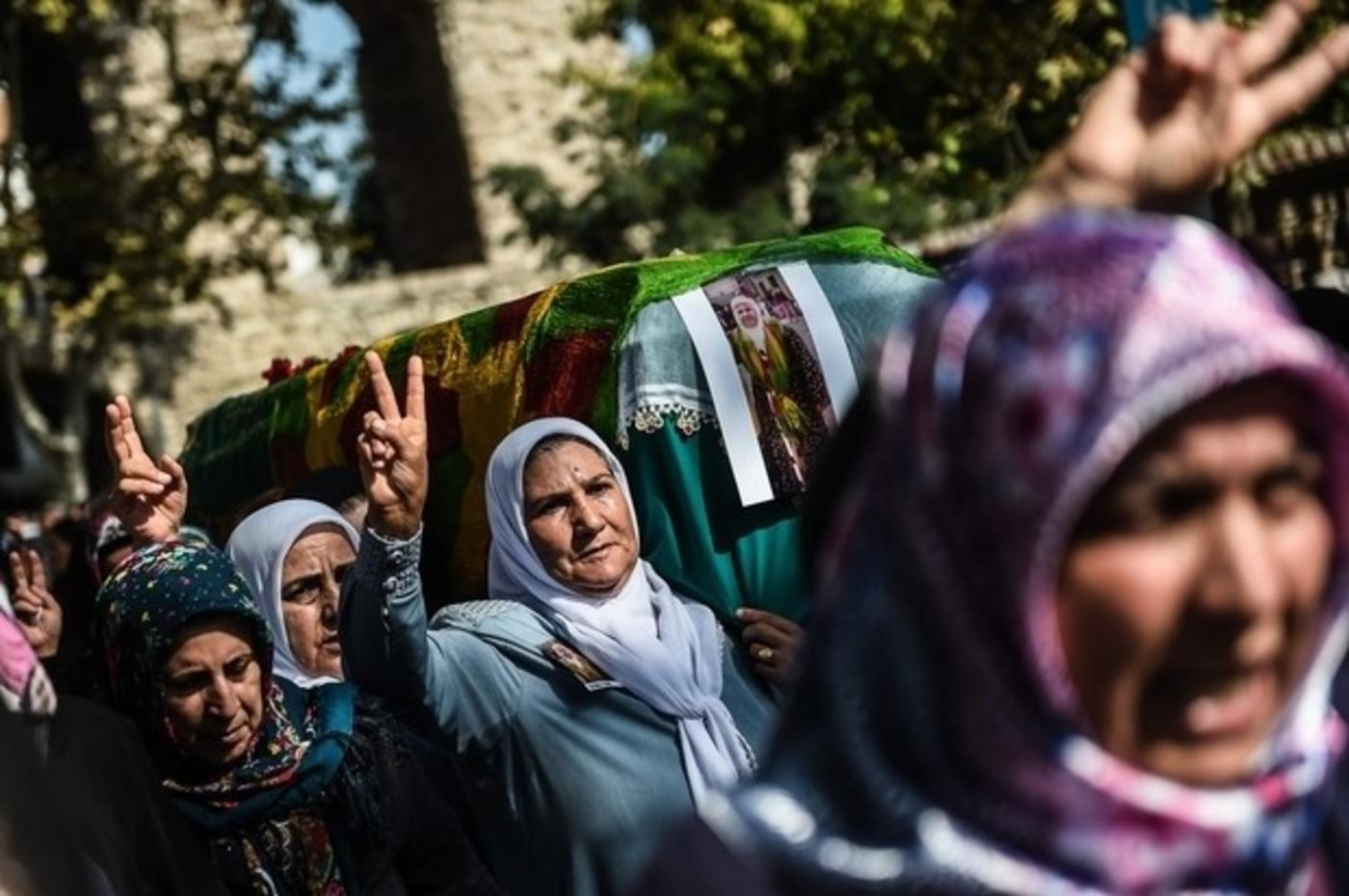 Women carrying the coffin of a victim of the Ankara attacks, 12 October 2015 (AFP)
By
Emmanuel Haddad

BINGOL, Turkey – "I hate this town. The people are poor and conservative," utters Mustafa, an English literature student, whilst the coach struggles on its way to Bingol. It crosses a long straight line of parapets with barbed wire, between which the Turkish military supervises any intrusion, fingers on the trigger. Then it lets off its group of students who, just like Mustafa, come from Diyarbakir and study in this Kurdish town of 267,000 inhabitants.

Two months earlier, five residents from Bingol drove the 150km separating them from the main Kurdish town in Turkey in the other direction.

On 26 October, at dawn, when police forces in Diyarbakir forced the door down, two of them triggered their suicide belts. The assault lasted seven hours. In the end, 15 people were arrested and seven, including five youngsters from Bingol, were killed. The governor from Diyarbakir later declared that this was a branch of Islamic State (IS).

There are some 10 million Kurds living in Turkey, in the south-east of Anatolia, and there is no secret as to the political and armed struggle against the Turkish state for several decades. It is also no secret that, since the beginning of the Syrian war, many militants of the Kurdistan Workers Party (PKK) have joined their Kurdish brothers in Syria on the front line against the Islamic State, in Kobane and Tal Abyad.

What is less well known is that more and more Kurds are joining the ranks of the Islamic State. A reality which, at first sight, is surprising.

"Nobody should be surprised. Radicalisation of the Kurds in Bingol and elsewhere started before the appearance of the Islamic State. It is directly related to the social and political crisis which is ripping the Kurdish region apart. It questions the simplistic vision of a unified and homogeneous Kurdish state," notes Mehmet Kurt, associate researcher at Queen Mary University in London and assistant professor in sociology at Bingöl University, where he works on the Islamist radicalisation in the southeast of Anatolia.

Between 2014 and 2015, 45 families in Bingol have alerted the Turkish authorities of the fact that one of their loved ones joined Syria or Iraq to fight in the ranks of a hard-line group, according to Haberturk. Sat on the terrace of a tea room in the "Five Ways" district, Benyamin clearly remembers his childhood friend who was gradually snatched up by the Islamic State:

“Like the majority of young people in this poor area, he had no work. He also suffered from psychological issues. Firstly, members of IS invited him to their discussions. Then, gradually, he started to travel with them to Istanbul and Bursa. He felt empowered. He even received a wage of 300 dollars per month. He was brainwashed! Now, he is fighting in Basra, in Iraq. His parents notified the authorities, but they have done nothing about it. For the Turkish State, IS is not a terrorist group," explains this security guard at Bingol University.

"You see this tea room, that's where they meet!" states Murad, a local trader, pointing out a window behind which there are long black curtains. "They don't pray in the mosque with us. They have a prayer room in the basement as they think that we are not real Muslims. I think they're crazy," he claims, shrugging his shoulders.

For Mehmet Kurt, this rise in radicalisation is the result of clearly identifiable social, political and religious factors, which make Bingol a favoured place for IS recruitment. "Bingol is the town with the second highest rate of suicide in Turkey. There has been a 500 percent increase in the last five years. Here, young people are looking for something. This leads to a high suicide rate, ideological and religious radicalisation or drug addiction," notes the researcher. "This quest for oneself can lead a drug addict to become Salafist, or a member of the PKK. There are also entry points to these groups, often within a family itself."

Behind these extremist behaviours, the researcher looks back on the pauperisation of a lifeless region, after three decades of war between the Kurdish movement and the Turkish state. "On a map, Turkish Kurdistan doesn't exist. But if you take the human development indicators into account, whether in terms of education, access to healthcare or poverty, it is easy to distinguish the Kurdish region of Turkey as this is where the indicators are at their lowest," states Mehmet Kurt.

A region rife with Salafism

However, poverty is not the only reason leading young Kurdish people to sign up to the ranks of the militia led by Abu Bakr al-Baghdadi. "It is one of the reasons, but the main one is the relentless work of Salafists over the last decade to attract young people. Some of their recruits have also left a very enviable social status," points out Kamal Chomani, joint founder of Pasewan, a bilingual platform in Kurdistan.

The region of Bingol is indeed one of the hotbeds of Hezbollah, a Kurdish Islamist group founded in the 80s (not to be confused with the Lebanese Hezbollah). "There are former members of the Hezbollah amongst the IS recruits," says Mehmet Kurt, himself author of a book on Hezbollah.

However, IS fighters from Bingol seek their inspiration away from Kurdish borders: "According to my sources, one of the main recruiters of IS got a degree in Islamic theology in Saudi Arabia. Previously, his family had financial issues and his two brothers suffered from mental problems," adds Mehmet Kurt. According to Aaron Stein, researcher from the Rafiq Hariri Centre for the Middle East and a Turkish specialist: "Some young people from Bingol have formed a jihadist group after studying in Pakistan in the 90s."

Kurdish regions lie on the regional juncture point between fundamentalism in Egypt, Pakistan, Iran and Saudi Arabia. "The Kurdish version of Islam has never been extremist,” indicates Kamal Chomani. “However, at the start of the 90s, the Wahhabite ideology from Saudi Arabia spread to Kurdistan. At a period of economic crisis and political oppression in all Kurdish regions, some young people embraced the Salafi ideology as the only way of expressing their troubles."

Faced with IS, Turkey turns 'a blind eye'

Bingol is not the only Kurdish town where young Kurds without any prospects head off to fight in Syria or prepare suicide attacks.

On 20 July in Suruc and on 10 October in Ankara, two bomb attacks directed against peaceful pro-Kurdish protests shook Turkey. The authorities identified IS as the main suspect for the two attacks, which respectively led to 32 and 102 victims and hundreds of injured. In grief, after the death of many political activists, the Kurds learnt aghast of the identity of the two bombers: two brothers from the Kurdish town of Adıyaman.

In its investigation into the Islamic State group in Adiyaman responsible for these attacks, Aaron Stein and the US journalist Noah Blaser underlined that "the repeated failings of the Turkish police and national intelligence services in arresting key members of the group allowed it to meet almost on a daily basis and recruit more members". Subsequently, the wave of arrests against the IS in March 2015 did nothing to prevent the attack of 10 October, the worst in Turkish history.

According to Mehmet Kurt, the negligence of the Turkish police regarding IS can be explained by two reasons: "For the Turkish state, the enemy has always been the secular Kurdish separatist. The idea that violence can come from radical discourse based on religion was inconceivable. Also, it is necessary to remember the desire of the Erdogan regime to see the fall of [Syrian President] Bashar al-Assad at any price. IS was the most powerful opponent to the Syrian regime and Turkey wanted to facilitate this combat… by closing its eyes when its members crossed the border, for instance."

Whilst the conflict between the Turkish state and the Kurdish movement was revitalised by the attacks in Suruc and Ankara, how can IS be prevented from benefitting so as to increase its recruitment campaign with young disenchanted Kurds?

"First of all, people need to be educated via the media, by insisting on the fact that the political and economic crises in Kurdistan should be resolved democratically. Then, the peace process needs to resume and the Turkish state should no longer ignore the claims of the Kurdish people," believes Kamal Chomani, before concluding: "But above all, the jihadist Salafi activities must be limited. However, unfortunately, these are supported by various governments in the region." Syria Intervention
This is how you correctly pronounce Daesh Islamic State
Ally with Syrian army if you're serious about defeating IS: Patrick Cockburn