Sick Gazan boy dies after being denied entry into Israel

17-year-old Ahmed Shubeir needed heart valve replacement surgery in Israel, but died after being denied entry at the Erez crossing 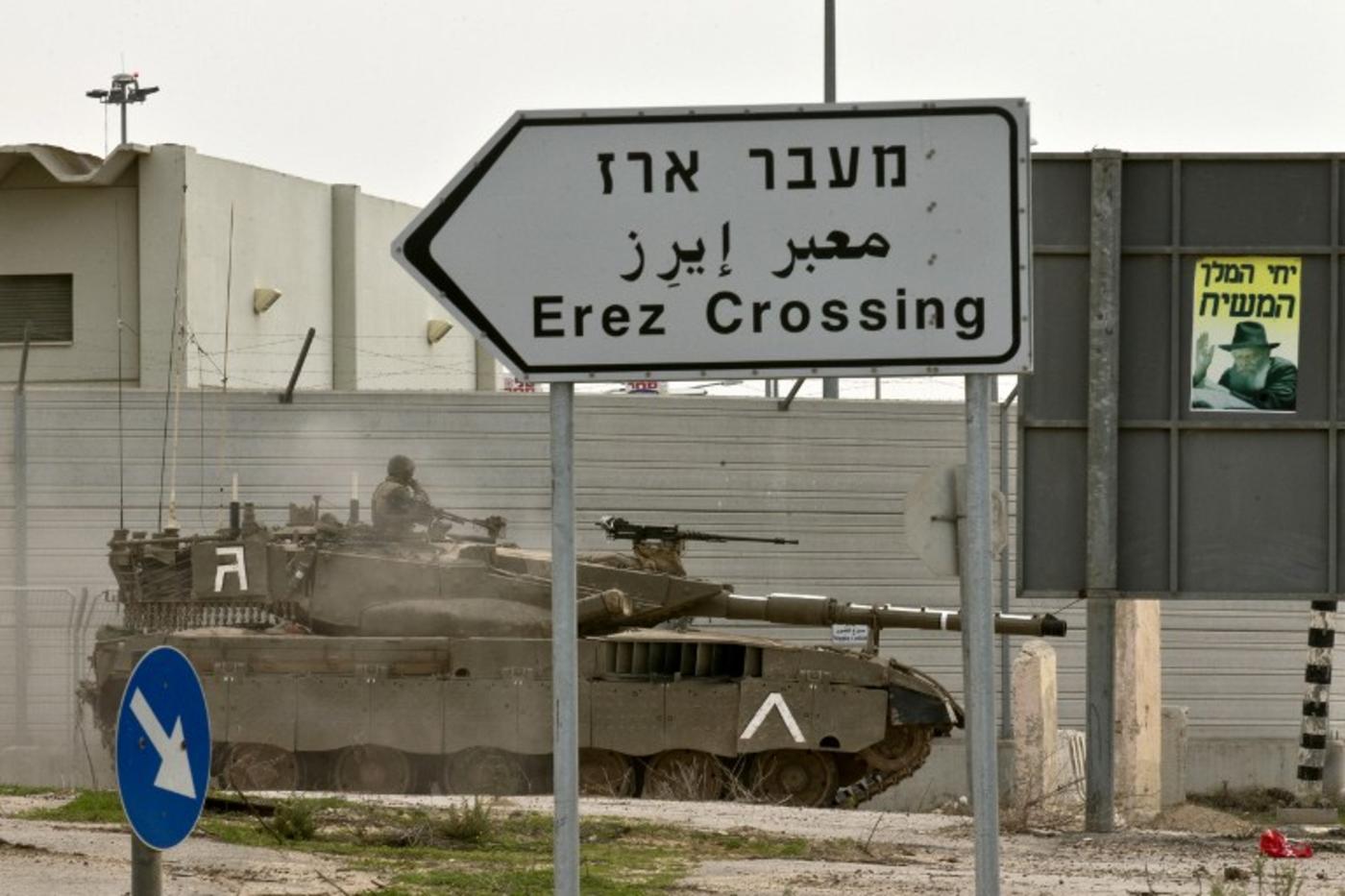 An Israeli army tank rolls along the Erez crossing passage along the southern Israeli border with the Palestinian Gaza Strip on November 21, 2012 (AFP)
By
Mousa Tawfiq

GAZA STRIP - "I woke up to the voice of my son Ali telling me that Ahmed couldn't breathe. I took him immediately to al-Shifa hospital. The doctors tried to help him with oxygen and electric shocks to the heart but his weak heart couldn't bear it any more," Hassan Shubeir, Ahmed’s father, told Middle East Eye with tear-filled eyes.

Ahmed passed away on 14 January at the age of 17, leaving his family in tremendous grief.

According to Ahmed's doctors in Gaza, the young teenager would still be alive today if he had been allowed to have surgery in Israel, where they would have installed a new heart valve. The surgery would not have cured him of his congenital heart malformations, but his life would have been extended.

Because of the Israeli siege imposed on Gaza since 2007, medical equipment has been scarce, making it impossible for complicated health issues such as Ahmed’s to be treated in the impoverished strip.

"We were watching death getting closer to Ahmed without being able to do anything. It's the most difficult feeling that a parent can feel," Shubeir said.

'We were watching death getting closer to Ahmed without being able to do anything. It's the most difficult feeling that a parent can feel'

Since September 2016 Israeli authorities repeatedly refused to let Ahmed cross over into Israel from Gaza at the Erez crossing in order to have the life-saving heart surgery. According to Shubeir, this was after he refused to collaborate with Israeli authorities who wanted information on Palestinian militants.

Ahmed's mother suffered a nervous breakdown following Ahmed’s death, and his brother Ali, who was very close to him, is still in shock and has not been able to resume his normal school activities.

Not only has the death affected the tight-knit family, but Ahmed's school friends are also finding it hard to believe that he is gone.

"Ahmed was my best friend. We shared the same desk in our classroom," said 17-year-old Ahmed al-Afghany.

“We live in the same building, so when Ahmed had to go to the hospital and did not come to school I used to bring him the lessons and homework which he had missed.”

Afghany added that they both shared the dream of one day becoming doctors. “I can't believe that he passed away,” he said.

The spokesman for Gaza’s interior ministry, Eiad al-Bozum, confirmed to MEE that it is quite common for Israeli authorities at the Erez crossing to exploit Gazans' urgent need to travel. Patients, students and merchants can be subject to long interrogations in exchange for information.

“Israeli intelligence exploits their urgent need to use them as spies in Gaza,” Bozum said. “The interior ministry does its best to raise people's awareness. We meet every person who wants to leave from Erez and tell them the possible Israeli ways to influence their minds during the interrogations,” he said.

Bozum had heard about Ahmed’s case from the media, but he could not give any further information about his case. “The Israeli acts are illegal and exceed all international laws,” he said.

In a statement in response to MEE, Israeli rights' group B'Tselem said:

“The untimely death of Ahmed Shbeir is a testament to the utter disregard Israeli authorities have for Palestinian lives. Unfortunately, this is not a lone case but part of an existing phenomena in which patients who need treatment outside of the Gaza Strip are coerced by Israeli authorities to cooperate in return for required permits.”

In a case similar to Ahmed’s, 26-year old Fadi al-Qatshan died in Gaza in 2014 because the implant in his heart failed. His family said that he was also refused entry into Israel for medical treatment for more than a year after he refused to collaborate with Israeli intelligence and give them information, according to Al Jazeera.

In 2014, Israeli intelligence officers spoke out about how they used “extortion” against “innocent Palestinians” to gather information about militants.

In an interview with The Guardian, a former Israeli intelligence agent said those in need of treatment in Israel or the West Bank were targets for blackmail, adding that they had two representatives from the intelligence unit in the field, one at the West Bank division HQ and one in Gaza.

On 20 June 1999, Hassan Shubeir, 55, welcomed his second son, Ahmed, into the world. During preliminary medical tests, doctors discovered that the newborn suffered from congenital heart malformations which could not be treated in the Gaza Strip because of the lack of medical resources.

Only a few days old, Ahmed was urgently transferred to Makassed hospital in Jerusalem where he underwent seven-hour open-heart surgery in a desperate bid to save his life.

"Even after his first surgery, Ahmed needed special treatment which couldn't be provided in Gaza. The doctors told us that he had to have check-ups from time to time," said Shubeir, who works as a legal adviser in the Palestinian Ministry of National Economy.

Like many other severely ill Gazan patients, Ahmed travelled to the West Bank and Israel for periodic check-ups and surgery. For complicated health issues such as Ahmed’s, the Palestinian Authority will usually cover treatment costs and travel expenses.

Ahmed’s parents described him as a very active child who loved to play with his friends and whose zest for life was not diminished by daily medication and doctor’s appointments.

But in 2015 Ahmed's health deteriorated because of problems with the artificial heart valve implanted 12 years earlier. On 27 December, he was transferred to Tel HaShomer hospital in Tel Aviv, where he underwent diagnostic and therapeutic laparoscopic surgery.

It was then that the doctors decided that Ahmed needed more major surgery to implant a new artificial heart valve. "Such surgery needs monthly clinical tests. We prepared all the required papers and everything was going well,” Shubeir said.

On 18 February 2016, Ahmed and his mother headed from Gaza to Israel, through the Erez crossing, as they had been doing for 17 years.

Yet in an unexpected turn of events, Ahmed’s mother said she was summoned to meet an Israeli intelligence officer who informed her that he was aware of Ahmed’s case.

According to Ahmed’s mother, the officer tried to convince her to collaborate with him. He wanted the names and locations of Palestinian militants in Gaza in exchange for facilitating her son’s entry into Israel.

"My son and I have been coming to your country for 17 years and we have never created any problems or posed threats to your security,” she told him. “I can't collaborate with you. I won't save my son by killing other people's sons.”

After the interrogation, Ahmed and his mother were eventually allowed through the Erez crossing and continued on to Tel HaShomer hospital, where doctors set 10 September as the date for Ahmed's surgery.

They returned home to Gaza, not knowing that it would be the last time they would be allowed entry to Israel through Erez.

Just a day before he was due to undergo surgery they received an alarming phone call from a department affiliated with the Palestinian Authority in Gaza. “We received a phone call from the medical treatment department abroad telling us that Ahmed and his mother were subject to an Israeli security check, and they could not leave the next day," Shubeir said.

Despite the obstacle thrown their way, the family did not lose hope and called the hospital and set a new surgery date. For extra support, they contacted local human rights institutions who work on cases such as theirs.

After two months of waiting, the Palestinian Centre for Human Rights called Shubeir and told him that Israeli intelligence wanted to meet young Ahmed alone, on 16 November.

"Ahmed's condition was getting worse. I had no choice but to take my son to meet the Israeli officer. We reached Erez at 8am,” he said.

“I stayed on the Palestinian side as I watched my son crossing alone to the Israeli side. I waited for 11 hours without being informed of anything. He came back at 7pm, tired and afraid," he added.

Ahmed’s parents said that Israeli soldiers took away his food and medication and left him in an empty room for 10 hours before he was able to see the officer.

According to his parents, the officer asked Ahmed intimidating questions: “Don't you want to undergo the surgery? I know that you’re suffering and your heart is becoming weaker every day. We don't want a lot from you, just a few names and places. You are a young child and you will have a beautiful life.”

Ahmed refused to collaborate, and according to his parents, said: "I'm just a child. I don't know how to do such things. I want to undergo the surgery and to succeed in school."

At the end of the meeting, Ahmed went back to Gaza believing he would not be able to undergo the surgery.

‘I hope he is the last victim’

The Al Mezan Centre for Human Rights in Gaza issued a report in January claiming that Israeli authorities regularly used this “coercive measure” with Palestinian patients who need permits to pass through Erez, in cases such as Ahmed’s.

The report stated that 2016 represented a drop in the number of Gazan patients who were granted access through the Erez crossing, down from 77.6 percent in 2015 to 61 percent in 2016, based on figures from the Palestinian health district coordination office.

As he looked at Ahmed's picture on the wall of their living room, Shubeir drank his last sip of coffee and whispered, "Why? He did nothing. He was a good boy with great manners."

The father wiped away a tear before continuing: "I hope he is the last victim. I pray to God that no one else experiences what I have."