Residents of Beit Jala protest against the newest extension of Israel's separation wall, which will literally carve the heart out of their community 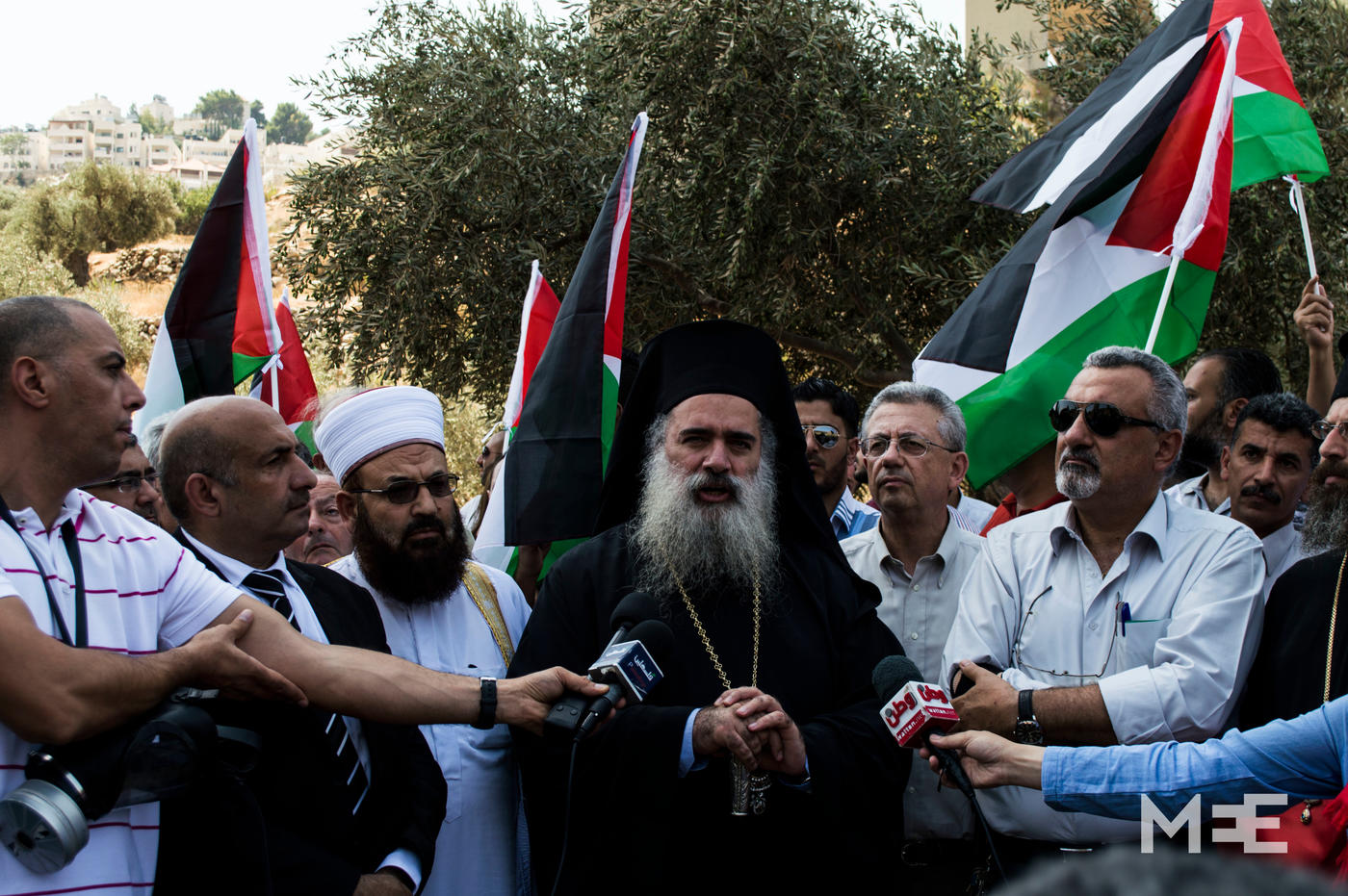 Archbishop Atallah Hanna helped lead the protest. "We will not let Beit Jala stand alone, and we will not be silent. This is our holy land, and it's our history and we will protest always until they leave our land." (MEE/Abed al Qaisi)

BEIT JALA, West Bank - The upturned land where olive trees once grew in front of Amira Abu Saad’s home portray what Abu Saad said she has already known for weeks: the battle for her community has been lost.

Abu Saad, 62, lives on the edge of a residential block in Beit Jala, a Christian-majority town just outside Bethlehem in the central occupied West Bank. The western-facing windows of her traditional Jerusalem-stone home overlook the vast land of the Cremisan Valley - at least for now.

Bulldozers and Israeli forces showed up outside her home last week and uprooted olive trees to make room for the newest extension of Israel’s separation wall.

Protesters gathered around the bulldozers, chanting against their destruction, as Israeli forces stood guard. Small groups have gathered in the area every day since to voice their opposition.

On Sunday hundreds of protesters showed up at the site in a large demonstration against the confiscation, chanting phrases like “Stop, stop the occupation,” and “Free Beit Jala,” as they marched down to a fenced area that separates the neighbourhood from the illegal Gilo settlement on the next mount.

Protesters hurled themselves at the gate and barbed wire, ripping it from the ground and carrying the metal structure away, chanting “How we broke the gate, we will break the wall.”

Dozens of Israeli troops responded, firing tear gas at the protesters, who ran for cover. Many suffered from tear-gas inhalation and a few were injured by the metal canisters that were launched to disperse the gas.

Abu Saad watches the daily demonstrations helplessly from her porch.

“The Israelis want us to leave the land and our homes, but we won’t leave. We live for this land,” she said, sitting in the shade outside her home with a group of women from the neighbourhood as protesters gathered below.

Fifty-eight landowners have been fighting the construction and path of the wall in Beit Jala for eight years. A court ruling in April, in which Israel’s High Court ordered the Defense Ministry to reconsider the route, gave residents hope that their efforts might succeed. Instead the route will go ahead as originally planned.

Soon Abu Saad’s view of rolling olive fields and the monastery she cherishes will be replaced by a towering grey wall.

The Cremisan Valley lies directly between the illegal Gilo and Har Gilo settlement blocks on the Palestinian side of the 1967 line. The route of the wall goes around Gilo and down, hugging a Beit Jala residential area, then continues through the valley and around Har Gilo.

The dip around the settlements confiscates the whole of the valley in between, including the Cremisan Monastery, built in 1885, as well as the Cremisan winery, convent and school, all of which are considered by residents as part of the heart of Beit Jala but fall within Israel’s illegally declared Jerusalem municipality boundary.

“They didn’t have to take all the land to build their wall, they could have gone around it,” Abu Saad said. “But we know what they want to do; they want to tear all our trees out of the land, and they’ll put buildings behind their ugly wall and our Cremisan Valley will be nothing.”

Residents who have gathered in protest of the construction believe the wall’s chosen route is nothing more than a land grab to allow settlement expansion without taking into account the deep history of the area.

“They are taking the land to protect the settlements that are built on our land in the first place,” Father Aktham Hijazin, a parish priest in Beit Jala told MEE while standing on the upturned soil where olive trees once stood.

Father Hijazin helps lead the protests against the confiscation, and while he is deeply troubled that the people of Beit Jala will be cut off from the Cremisan Monastery, he said the land confiscation will have a bigger effect on the community.

“It’s not a matter of the monastery being on this side or that side, it’s the matter of the land itself. The monastery is built on the land of Beit Jala, the land is the future of more than 900 people,” Hijazin said. “They are not just taking a church, they are cutting our land, our future and our history.”

Hijazin also pointed out that last-ditch efforts to change the route at least around the school - separate, but affiliated with the monastery - also failed.

“They will cut the relation between the monastery and the school and our kids. This is all just so, so much more important than the monastery,” Hijazin said.

Issa Khalalia owns part of the land being confiscated by the construction of the wall. He said the rolling Cremisan Valley is an important part of his community’s history, but he also cited the economic importance of the land.

“All the agricultural land in Beit Jala is in the Cremisan valley and is being taken in this land grab. They are confiscating as much as they can, and so many families that depend on this land will be devastated,” he said.

Olive trees account for around 80 percent of the fruit production in the Palestinian Territory and 14 percent of the economy, according to UN estimates. The 740 acres of the Cremisan Valley are covered in terraces and fields of olive trees.

“We fought hard to keep this land. We keep hoping we can still change something even now, but I don’t think it will work,” Khalalia said.

Yusuf Sinat, a resident of Artas village, three miles away from Beit Jala, plans to come to the protests every day this week in solidarity with Beit Jala residents. The residents of  his village have already gone through what the Beit Jala community is now experiencing.

“They’ve already taken our land, and the wall is close to our houses. I hate to see that this is happening to these people here as well,” Sinat said.

Sitting under the shade of an olive tree next to a Palestinian flag hanging from its branches, he likened the uprooting of Beit Jala’s olive trees to the destruction of ancient history happening across Iraq and Syria.

“Some of these trees are 2,000 years old,” Sinat said. “How is that any different from the Islamic State destroying ancient ruins? These trees are our history and they are just ripping them from the ground.”

Sinat said he will continue to come to the protests to support the people of Beit Jala for as long as they continue, as will Father Hijazin, but while Hijazin helps lead the protests, at this point, he said, he thinks the only way to save the Cremisan Valley is through divine intervention.

“We have only hope in God, we can’t hope for anything else,” Hijazin said. “The international community has done nothing for us, but we will keep praying here and keep our faith in God to help us.” 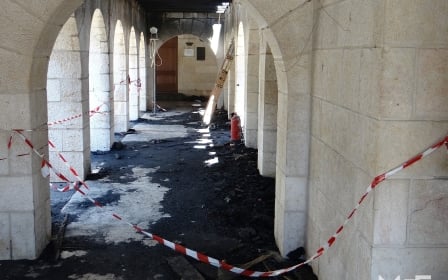