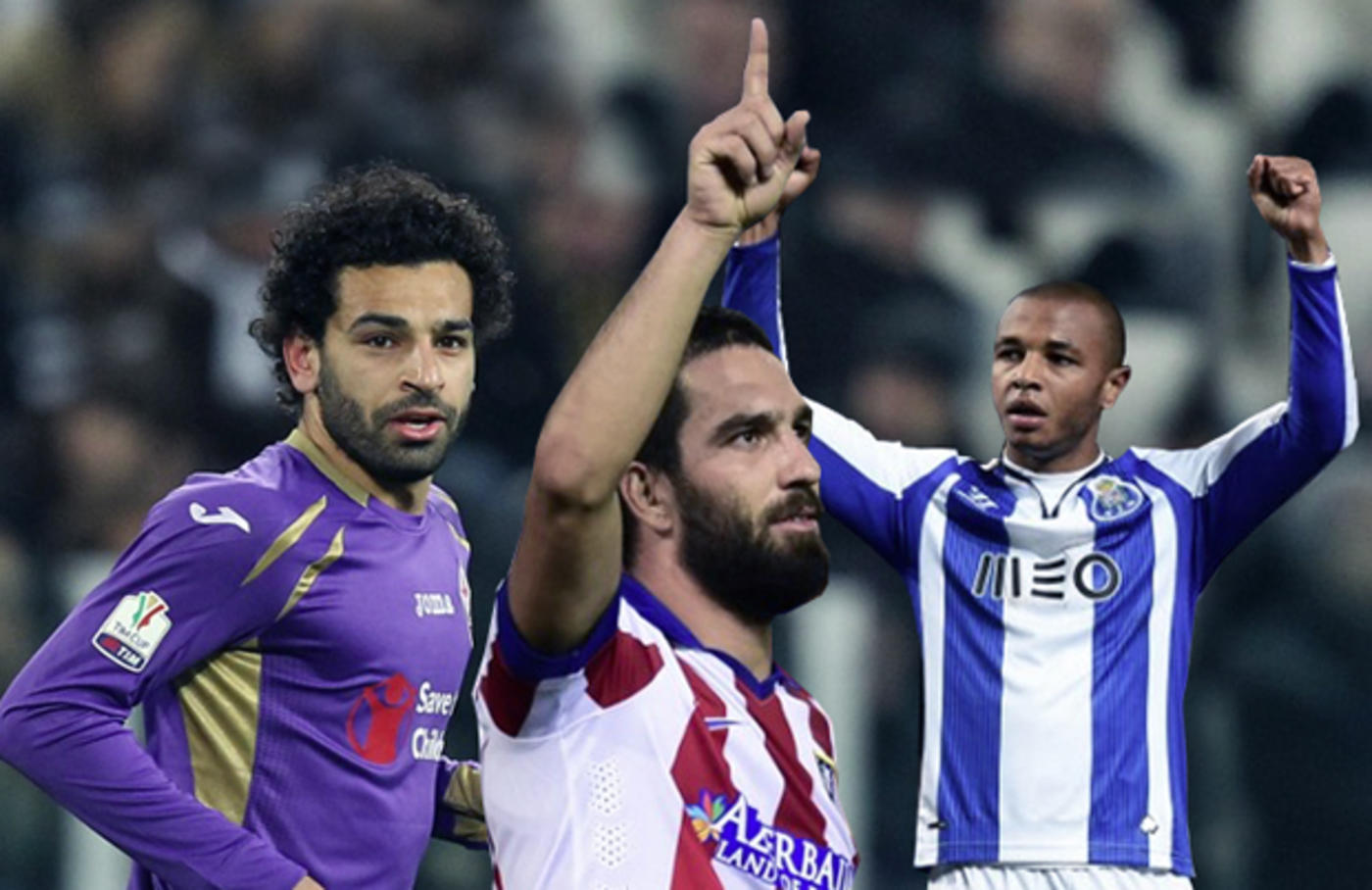 From Egypt's Mohamed Saleh to Algeria's Yacine Brahimi, many players from the Middle East are making their mark in the football arena worldwide
By
Suhayl Al-Sammari

Undoubtedly the star man of the Middle Eastern game at the moment, Egyptian winger Mohamed Salah has set the Italian Serie A alight with some incredible performances since joining Fiorentina in January. Salah has showcased his skills on the highest stage, having played for Chelsea in England and represented the Egyptian national team 35 times. An attack-minded player with quick feet and close control in abundance, Salah has also been praised for his work-rate. Remarkably, the 22-year-old has scored 20 goals for his country and it is not inconceivable that Salah could one day overtake Hossam Hassan’s record 68 goals to be his nation’s top scorer.

Before moving to Chelsea Salah had already played football in London, having represented Egypt at the 2012 Olympic Games.

Turkish midfielder, Arda Turan has become one of the region’s prized assets after playing a crucial role in the recent domestic success of Atletico Madrid. A key component of the side that snatched the Spanish title from the duopoly of Real Madrid and Barcelona in 2014, Turan showcased his faultless technique and close control as Atletico swept all before them. Prior to moving to Spain, the Istanbul-born playmaker was a regular for boyhood club Galatasaray. Vastly experienced at both club and international level, Turan has represented Turkey at every level from under-16 and amassed 78 caps for the national team.

Often described as a volatile player, dating back to his time at Galatasaray, Turan caused controversy in January after throwing his boot at the assistant referee in Atletico’s Spanish Cup fixture against Barcelona. Remarkably, he escaped without a ban.

Another of Algeria’s so-called Golden Generation of burgeoning talent, central midfielder Yacine Brahimi is a player who has been tipped to be amongst European football’s elite in the coming seasons. A powerful and attack-minded playmaker in the mould of his hero Zinedine Zidane, Paris-born Brahimi made his name in the French Ligue 1 at Rennes before moving to Granada in Spain. It was his subsequent transfer to Porto that allowed him to flourish, with several top-drawer performances catching the eye of the continent’s top clubs. Despite representing France, at youth team levels up to the age of 21, Brahimi opted to represent Algeria at senior level. He put in some scintillating performances at the 2014 World Cup as Algeria defied expectations. Brahimi is certainly a player to keep an eye on.

Brahimi turned down a host of top European clubs as a 16 year old to sign a contract with Rennes, citing their commitment to education of young players as a crucial factor, allowing him to attain a Baccalaureate.

Another star of Algeria’s World Cup campaign, Sofiane Feghouli has become a household name in Spanish and European football following a series of influential displays for Valencia. The Spanish giants signed the 25 year old in 2010 and he has been a regular in the first-team ever since, amassing more than 100 league appearances for the club. Feghouli is a pacy and skilful winger, often played on the right of midfield. Although born in Paris and representing France at various youth team levels, Feghouli pledged his allegiance to Algeria and since making his debut in 2011, has represented the Eagles on 23 occasions.

Feghouli scored Algeria’s first World Cup goal in 28 years in 2014, firing home a penalty against Belgium in their opening fixture of the World Cup in Brazil.

An imposing striker, Islam Slimani has become a key figure for Portuguese powerhouse Sporting. Having being plucked from Algerian club CR Belouizdad, Slimani initially struggled in Lisbon. However, a wonderful 2013-14 season saw the strong forward establish himself in the first team for club and country, as well as being rewarded with the 2013 Algerian Player of the Year award. Slimani led the line for Algeria during their memorable World Cup campaign in Brazil and is becoming an increasingly sought-after player in European football.

Slimani moved to Europe in controversial fashion, taking former club Belouizdad to court over a contract dispute, centred on the club’s failure to provide him with an apartment. His contract was terminated and he was free to move to sporting.

The strong centre back has been a rock at the heart of one of the meanest defences in Europe. Having arrived at neuveau riche Monaco in January 2014, Abdennour has cemented his place at the back and has won plaudits for his recent displays. Although starting his career in his native Tunisia, the powerful defender has spent much of the last five years in Europe, playing in both France and Germany. Called up to the Tunisian national team at the tender age of 20, Abdennour has gone on to win 33 international caps and has been tipped as a future captain of his country.

Abdennour began his career as a promising left-winger before being converted into a left-back and finally a centre-back upon arriving in Europe.

The precocious talents of pacy left-back Ali Adnan has seen him become one of the few Iraqi players to break into a European league. Although playing for lowly Caykur Rizespor, Adnan has caught the eye of several of Europe’s top clubs, including Chelsea and Roma, whilst Turkish club Galatasaray and Italian powerhouse Napoli have already seen bids for his services rejected. His performances in Turkey have seen him become one of his club’s most valuable players, a responsibility he appears to relish despite having only recently turned 19. A member of the Iraqi squad which came 4th at the 2015 Asian Cup, Adnan has been seen by many as one of the best players of his generation and has already drawn comparisons to the world’s most expensive player, Gareth Bale.

The son and nephew of former Iraqi internationals, Baghdad-born Adnan comes from strong footballing stock and is a graduate of the famed Amo Baba Football School.

Iranian veteran Javad Nekounam has been a staple member of the Iranian side since making his debut in 2000 and has gone on to amass an incredible 150 international caps. A tough-tackling midfielder with an eye for a goal, Nekounam caught the attention of several European clubs after some solid displays at the 2006 World Cup. A move to Osasuna in Spain followed, where he has become a fan favourite following two spells at the club. Despite entering the twilight years of his career at the age of 35, Nekounam has proven himself to be an important figure at the club and has featured in the first team throughout the season.

Following his transfer from Al-Sharjah in UAE to Osasuna, Nekounam became the first Iranian to play in the Spanish top flight.

Arab-Israeli midfielder Beram Kayal is a midfielder with a burgeoning reputation in the European game following some strong performances at Scottish powerhouse Celtic, before a move south of the border to Brighton. Having caught the attention of Israeli side Maccabi Haifa as a 16 year old, Kayal progressed through the ranks to become a key player in the title winning squad between 2007 and 2010. A move to Celtic followed, where Kayal established himself as a fans favourite, clearly enjoying the responsibility of playing at a higher level. The young midfielder has used his rare position as an Arab playing for the Israeli national team to call for greater unity, as well as speaking of his “pride at wearing the shirt of the country of his birth”.

Kayal has been considered the leading member of a young generation of Arab-Israeli players who have opted to represent Israel, with the likes of Moanes Dabour and Taleb Tawatha breaking into the national team.

Oman goalkeeper Ali Al-Habsi is a player who has already etched his name into the history books of English football, having been a key member of Wigan Athletic’s fairytale FA Cup victory in 2013. A popular figure throughout his time in England, Al-Habsi has won rave reviews for his athleticism and his ability to save penalties. The 33 year old has also received recognition for his efforts, having been voted Wigan’s Player of the Year in 2011. A vastly experienced goalkeeper, Al-Habsi has won 101 caps for the Omani national team and has appeared at three Asian Cups. Al-Habsi has spoken of his pride at being the first Omani to gain recognition in Europe and hopes to inspire a future generation of Gulf players.

Al-Habsi is a fully trained fireman in his native Oman, previously working at the Seeb International Airport in Muscat.

Let us know what you think of our rankings. Comment in the section below.