What is the Temple Mount Movement? 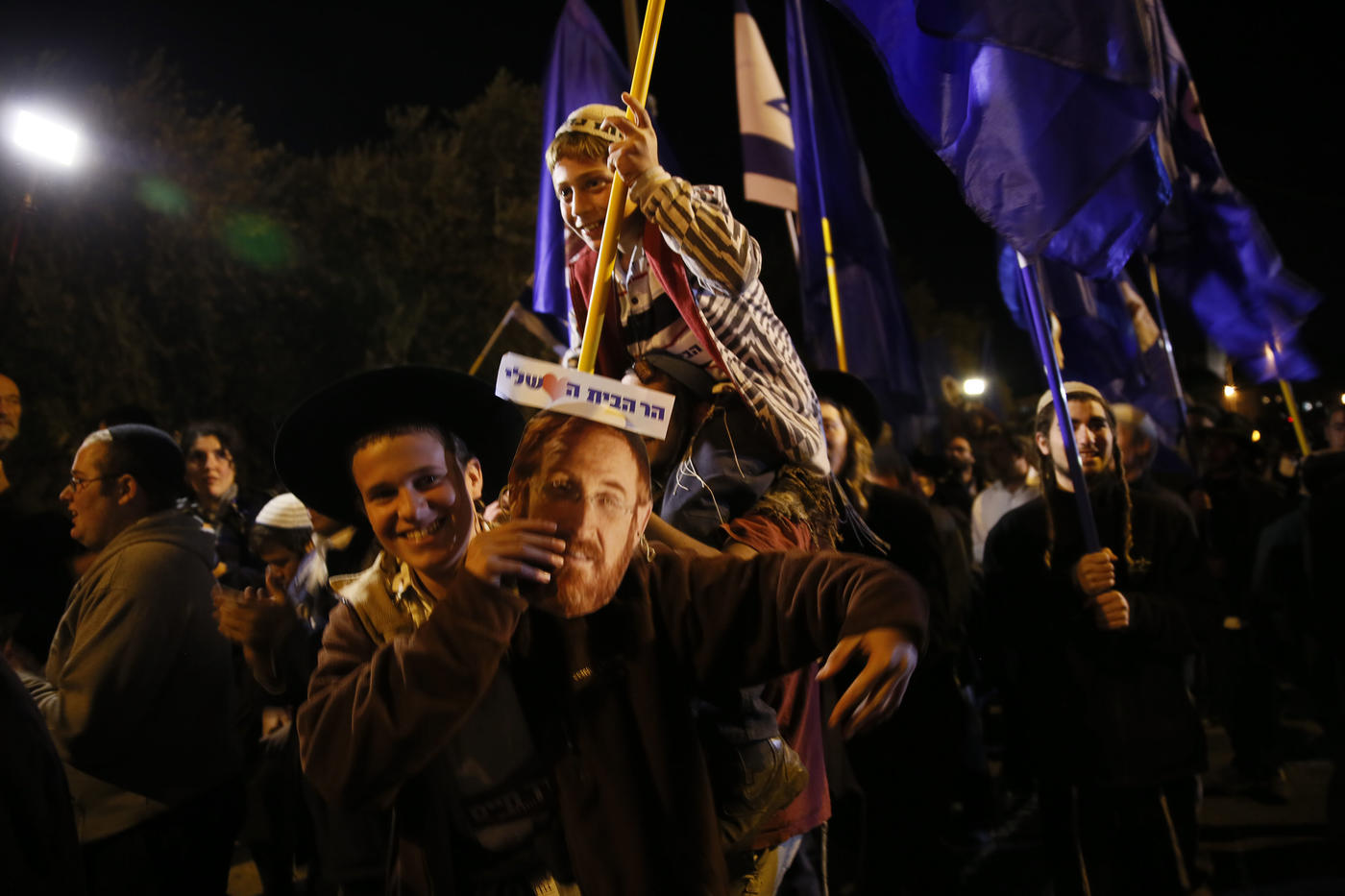 Every morning at the Jerusalem Old City’s Mughrabi Gate, international tourists and dozens of messianic Jewish Israelis - Jews who believe that their actions will bring about a prophesied Messianic era without war or famine - line up. They do so to walk the area known to Muslims as Al-Aqsa compound, or the Haram al-Sharif, and to Jews as the Temple Mount, because of the belief that it housed two ancient temples.

Yaakov HaKohen, an American-born Israeli - who has banned from the Mount for incitement by Israeli police – stood on a chair overlooking the crowd, holding an oversized Israeli flag.

“We must make the Muslims submit to us,” he shouted. “Tell them the truth.”

While HaKohen is affectionately known to other Messianic Jews as “Crazy Jake” and earns looks of bewilderment from tourists and audible groans from other Jews waiting to enter, his message is increasingly beginning to resonate in certain circles within Israel.

The status-quo of Jerusalem’s holy sites has not officially changed since the Ottoman era - Muslims have prayed at the Dome of the Rock and al-Aqsa Mosque, and Jews at the Western Wall. But the extreme-right wing group of messianic Jews and ultra-nationalists are increasingly determined to establish facts on the ground that would change the status-quo, potentially igniting a holy war.

Over the last 30 years, the Temple Mount movement has sprung up to demand that Jewish sovereignty be imposed over all of Temple Mount, seen as Judaism’s holiest site.

These kinds of views, however, don’t resonate with most orthodox Jews who deem visiting the Temple Mount a catastrophe. Jewish law, or “halacha,” actually forbids Jews from going to the Temple Mount because of its religious importance.

“According to halachic tradition, one must not enter the area of the Temple without being cleansed from the impurity of death. This purification ritual is no longer possible, given the requirement of a special rite involving the ashes of a red heifer, which cannot be found today,” Tomer Persico, a lecturer at the department for Comparative Religion in Tel-Aviv University, wrote in his report ‘Dangerous Liaison.’

“Until the mid-1990s, there was wall-to-wall consensus that visiting the Temple Mount was forbidden,” Persico added.

“Even now, most major rabbinical figures still condemn it. [The Temple Mount movement] is basically an anti-orthodox movement.”

However, the small movement of only a few hundred activists that was once seen as on the very edges of the fringe has grown increasingly influential and managed to insert the issue of  Jewish sovereignty over the Mount into more mainstream Israeli discourse.

The movement began to gain momentum as the Gush Emunim movement, a messianic Zionist drive that was prevalent among West Bank settlers from the mid-1960s, encountered a series of ideological and territorial setbacks in the early 1990s.

As the Oslo period came to the fore, the Temple Mount movement started to attract attention and support. It quickly gained a strong foothold in the ruling Likud party with “about half of the members of the party supporting the Temple Mount activists,” according to Persico.

Indeed, the party platform states: “Likud will act in the next term to find a solution that allows freedom of worship to Jews on the Temple Mount, while of course treating the matter with the necessary sensitivity.”

For some, the Mount is seen as a focal point of Zionism. “You arrive to the land of Israel and you leave [out] the Temple Mount - there is no meaning to any other place without the Temple Mount,” said Michael Ben Ari, a far-right nationalist and former member of Knesset.

Baruch Marzel, who comes from the same camp as Ben Ari, demands the destruction of al-Aqsa in no uncertain terms.

“The Temple Mount belongs to us. We own the place. We want to clean the Temple Mount from all the terrorists and anti-Semites, and give it back to the Jews so we can build the Third Temple,” he told Middle East Eye.

Global battle for civilisation against Islam

Last week, American-born rabbi, Yehuda Glick was shot after speaking at a conference at the Menachem Begin Heritage Centre called ‘Israel Returns to the Temple Mount.’ Likely targeted for his provocations on the Temple Mount, Glick survived the assassination attempt, although he remains in stable but serious condition in hospital. Hours later, Israeli police shot dead Mutaz Hijazi, a Palestinian from the nearby East Jerusalem neighbourhood of Abu Tor, who they say was the main suspect in the extrajudicial shooting.

That morning, as clashes in Abu Tor between Israeli police and young Palestinians raged, supporters of the Temple Mount movement held a demonstration, demanding Jewish sovereignty of the Temple Mount. The meeting was led by deputy speaker of the Knesset, Moshe Feiglin, one of the primary political figures in the movement, who is seen as close to Glick.

Feiglin, a far-right religious Zionist who called for Palestinians in Gaza to be “concentrated” and “exterminated,” sees the battle for Jewish sovereignty of the Mount as the epicentre of a global battle against Islam.

“We are in the major front of the fight for the free world against the evil forces of the most extreme Islam,” Feiglin told MEE. “Behind the violence, there is a spiritual battle, and the core of that battle is that place - the Temple Mount.”

Support from the state

The Temple Mount movement is actually an umbrella term that consists of several organisations, many of which are directly and indirectly supported by the Israeli state.

The most prominent organisation is the Temple Institute, which advocates building a third Temple on the al-Aqsa compound and is dedicated to “removing the Muslim shrines placed” on the Mount.

The Temple Institute organisation was founded in 1983 by Rabbi Israel Ariel who was a high-ranking member of the Meir Kahane’s now-banned Kach Party. Meir Kahane, who remains a popular figure in some segments of Israeli society, was also the founder or the Jewish Defence League, an extreme-right wing Jewish militant organisation that is considered a terrorist group by both the Israeli and United States governments. Glick is a central figure in this movement.

The Religious Education Administration factors the Temple heavily into its curriculum and even recommends touring the Temple Institute, according to research compiled by Tomer Persico.

The Temple Mount movement has broad support among evangelical Christian Zionists in the United States who now outnumber Jewish Zionists by an estimated ten to one. Led by megachurch pastor John Hagee, they believe in an end of day prophecy in which the destruction of Islam’s holy sites and building of the Third Temple will lead to an apocalyptic war, which would prompt the second coming.

Despite making statements many perceive as anti-Semitic, Hagee has been embraced by the Anti-Defamation League and The American Israel Public Affairs Committee (AIPAC), two major groups of the Israel lobby in the United States.

Hagee is the executive director of Christians United for Israel (CUFI), a pro-Israel Christian lobby whose base arguably wields more power than AIPAC. CUFI has sent numerous pastors to Israel and has 1.8 million members, according to its website.

Though it is extremely unlikely that the State of Israel will demolish some of Islam’s holiest sites, the actions of the Temple Mount Movement are inciting an already extremely sensitive situation. As violence in Jerusalem escalates, these provocations could boil over and have wider implications in the region and across the world.

“Walking away is not an option,” said Daniel Seidemann, Israeli attorney and founder of the NGO Terrestrial Jerusalem, which tracks developments in the city that could spark violence. “Should events continue to careen out of control, all of the other conflicts in the Middle East will be significantly more difficult to contain. The Temple Mount doesn’t stay on the Temple Mount.”