Why Egypt's modern art is much more than just rubbish 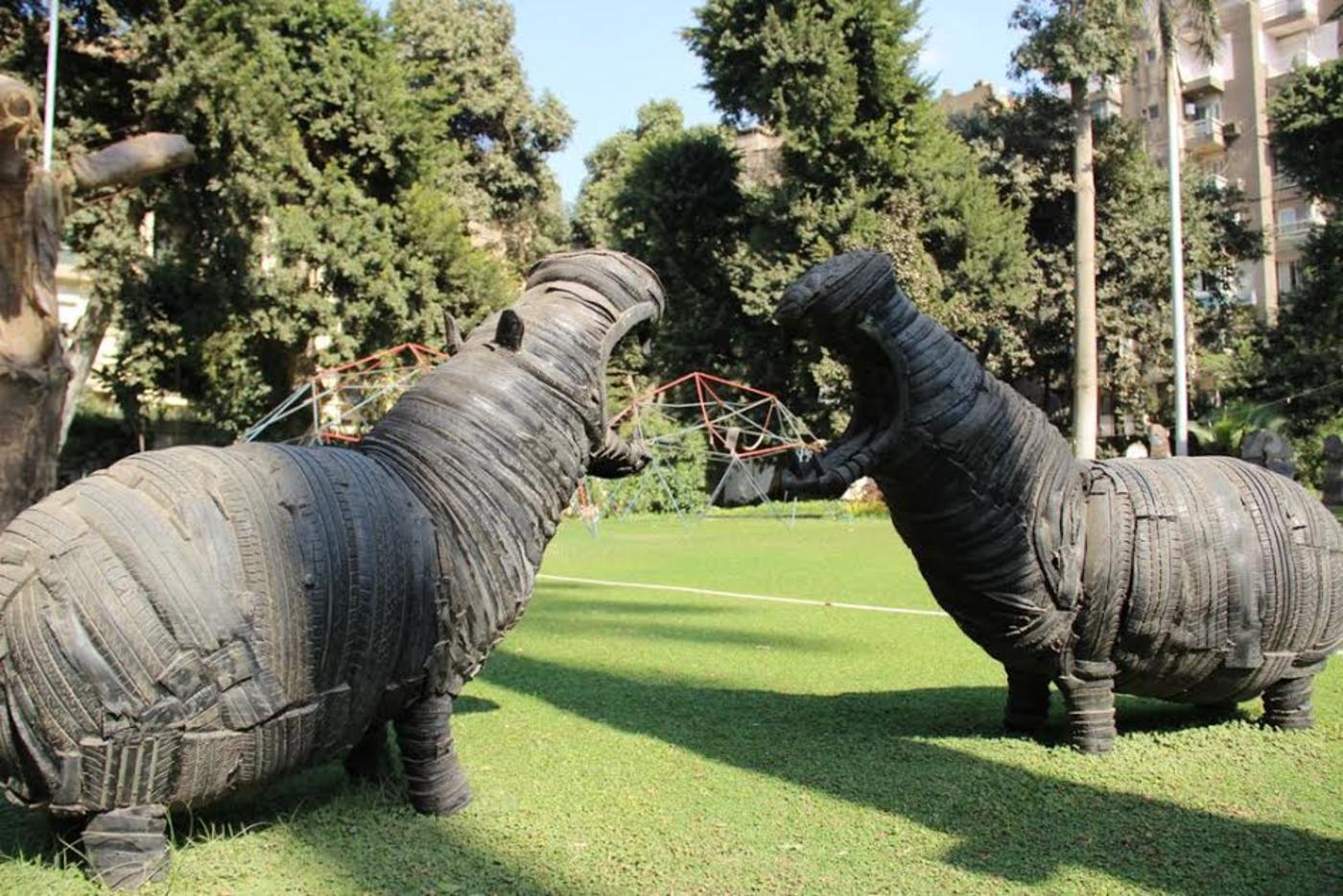 CAIRO - Two steps inside the gate of the Swiss Cooperation Office in Garden City, a residential district of Cairo, a wonderful garden lies with a medley of odd shapes and colours dotting the green carpet. In the lower left corner of the garden, sunrays glisten through an arch of plastic bottles, acting as an inviting footbridge for visitors to the open-air exhibition.

The visual impact is immediate as one enters. Ingenious art pieces made of unusual reused materials are on display, many of them being either interactive or functional, adding a playful dimension that breaks from everyday life.

Further to the right, an installation resembling a set of slum-style shacks easily grabs one's attention. Old window shutters with used wood boards that are decorated with pieces of cloth stand vertically and form a maze, resembling a ghost town.

"The idea behind it is we live in a maze, we’re lost in our lives, we try different paths," said Azza Ezzat, who made the labyrinth with two other artists.

'The idea behind it is we live in a maze, we’re lost in our lives, we try different paths'

Visitors are prompted to navigate the maze and experience a short, zigzag footpath, representing a miniature model of the cycle of life.

The From Rags to Riches (FRTR) project, which ran from 6 November 2016 to 31 January 2017, closed its final phase in a first of its kind exhibition to showcase in Egypt. Created with the use of recycled materials and conceived for public spaces, 20 artworks developed by 22 artists were presented.

Organised by Baad El Bahr Cultural Association (BEBA), FRTR was curated by the Mashrabia Gallery of Contemporary Art, and funded by the embassies of Switzerland, the Netherlands, Austria, Spain, and the Italian Cultural Institute in Cairo.

Stefania Angarano, director of the Mashrabia Gallery and curator of the project, explained that the idea for FRTR came to her during the 2011 revolution, when a new consciousness about the city emerged.

"People started to clean the streets and paint the pavements, for the first time showing interest in the public space and seeing the surroundings as their own," said the curator, who has been living in Egypt for 25 years. "A new movement was born, this is where the project took root."

'People started to clean the streets and paint the pavements, for the first time showing interest in the public space and seeing the surroundings as their own'

Using discarded materials is at the core of FRTR project, posing key questions regarding how one can relate to non-durable objects and recycle waste products, while promoting environmental awareness in the search for a better quality of life.

Cairo is one of the most densely populated cities in the world. With 19,376 people per square kilometre, solid waste management is a tough challenge.

The sight of piles of rubbish on almost every street corner has become a normal part of Egyptian daily life. Waste collection is managed by both formal and informal sectors. The Zabbaleen, the traditional garbage collectors, recycle most of Cairo’s household waste, providing one of the world’s most efficient waste-recycling systems.

Yet a huge amount of waste cannot be disposed of properly due to increased waste generation, a lack of waste collection infrastructure and disposal facilities.

The FRTR project aimed to address this, encouraging Cairo's residents to reuse waste in ingenious ways.

Entirely based on recycling, it also wanted to make contemporary art accessible to everybody in society, not just for an elite circle.

Supported by volunteers and international artists, the group of talented young artists worked hard between July and September in a big open garage at Kodak corridor downtown, to prepare their artwork for the FRTR exhibition.

A variety of upcycled materials were used, such as glass, paper, plastic, fabric, metal, tyres and bottle tops.

Among other creations, there was a fish made of toys using a bike as a supporting skeleton; a playground, including swings made out of tyres, in addition to the structure of a refugee tent; and a car with a Mercedes logo and the body of an Audi covered in tyre tubes.

One installation that makes you stop and think is a population of large-sized paper dolls made of cardboard. In their standing positions they are meant to recall the rows of people seen in the images of the 1930s Great Depression that are waiting for jobs, or any type of aid. Kamila Bassioni, the artist who was inspired to produce the piece, believes the Arab world is currently living through a similar depression.

"I used to take the Metro every day. Looking at people’s faces, I could see depression and hopelessness," Bassioni said, describing today’s mood in Egypt.

The gloomy, dull-looking characters, with their heads facing down and grouped in an unorganised way, portray the current state of Egyptians.

"People earn little, prices keep rising, the poor are getting poorer, there are no rights," the artist continued. "We’re standing and waiting for bread, work or travel abroad, for a solution."

After the FRTR exhibition ended, some of the artwork was moved to a separate pop-up exhibition at Kodak passageway. Walking around her two art pieces currently exhibited in the atelier, Rania Atef checks their state and figures out they need only a little maintenance despite having been outdoors for almost three months.

She made a chair and an Arabic coffee pot, two objects considered iconic in every Egyptian house, in larger scale than the usual size with cardboard, wood and newspapers.

Strips of paper with various colour shades adorn the outside of the coffee pot, while inside black paper lines the bottom to make the pot look like it is burning.

"These are the two things that people never throw [away] or stop using. Broken or damaged, they will keep and use them for the same purpose," Atef said, while touching the loose handle of the pot, which was left in that state on purpose. People are used to fixing some parts or adjusting to their deformations.

"We Egyptians [continue to] move on, whatever happens in our lives, even the worst. We just adapt to the problem, we don’t seek change," she clarified her concept by pointing at a chair with a missing leg, which is made out of a pile of broken chairs that are tied up. A collage of old magazine cuttings - mostly fashion related - was used to cover up the chair.

'We Egyptians [continue to] move on, whatever happens in our lives, even the worst'

Artworks by Atef and Akeel Khreef are open to the public at Kodak passageway until 5 March. After that, individual works from the FRTR exhibition will reach their final destinations and be set up in different public places in Cairo.

The intention of the FRTR project is to encourage more Egyptians to recycle by illustrating the artistic potential in the reuse of materials.

"Through a creative process, poor and scorned materials with no appeal can be transformed into artworks to achieve aesthetic values such as transparency, flexibility, brightness and colour," Angarano observed. She is more than satisfied and said the exhibition was a big showcase that carried a high visual effect.

Recycling may be a new frontier in Egypt’s art scene.

Culture
Borat is brilliant, but its Holocaust jokes are beyond the pale
Joe Gill
Culture
From Delhi to Doha, Karak tea is the perfect refreshment
Heritage
Egypt: Anger at loan of Islamic artefacts to Saudi Arabia for two years