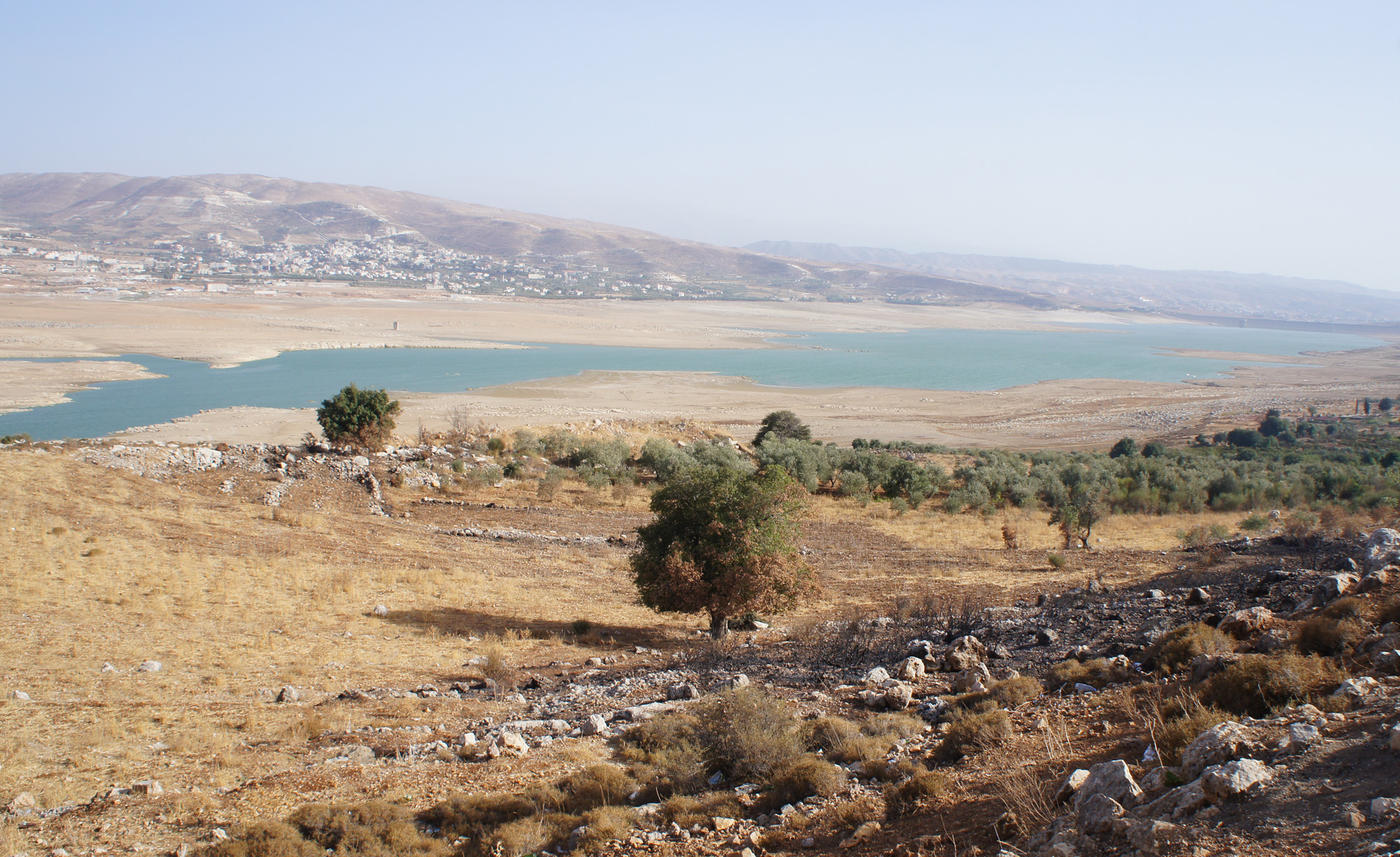 BEKA'A VALLEY, Lebanon -  The shoreline around Lake Qaraoun has shrunk. Considerably. In the heart of the Beka'a Valley, known as the "agricultural breadbasket" of Lebanon, the lake's picturesque hotels and restaurants, usually packed with tourists on weekend getaways, now stand bereft, and small wooden boats are lodged into the cracked mud bank.

"People come here for the water, but there has been no rain. The lake dried up," said local restaurateur Hassan Tarif. "Business is down. Actually, it has been like this since the Syrian war, since Syrians would come here too."

Lebanon is suffering from a severe drought. Last winter, little rain and mountain snow, compounded with a shock freeze in March, killed harvests for farmers and critically depleted the water source for thirsty crops and overpopulated cities along the coast.

"I have never seen the lake like this," said Elias Abu Khazen, a 60-year-old farmer who has lived his whole life along its shore in the Christian village of Ain Zebdeh.

He points to the ominously yellowed trees on a nearby slope above the dry bed of the Litani River, which feeds the man-made Qaraoun Lake. This year he didn't plant water-dependent vegetables, opting to tend to his apple, peach and cherry trees instead.

Turning a profit on agriculture is always hard. Businessmen from Beirut, Syria and Saudi Arabia usually buy an entire harvest on the cheap, and then increase prices for sale in the cities. This year, instead of pocketing his usual profit of $10,000, Abu Khazen will make one-eighth that amount.

Hassan Machlab, head of Lebanon's agricultural research center, ICARDA, which prioritizes water management methods, said: "I can't remember when we last had a dry year like this one. In the central Beka'a, there is usually about 540 millimeters of annual rainfall. This year we received about 40 percent of that."

Lebanon has an abundance of water. Its two long mountain ranges run parallel down the country's spine, collecting snow in winter. There is a large river network, which drain to underground aquifers. Then there is the politically disputed Sheeba Farms, close to the intersection of Lebanon, Syria and Israel, which act as a tank collecting snow and water rolling off of Mount Hermon's slopes.

"Lebanon's water networks have been around for a very long time. In Anjar, near the Syrian border, there is a subterranean canal that distributes water across the country to households in coastal Tyre," said Nadim Farajalla, a professor of hydrology and water resources at the American University of Beirut.

"And all around Beirut you still find water networks functioning that date back to the Ottoman Empire," he said. "We have been building and rebuilding and adding to our networks. It is an ongoing process that was interrupted severely during the civil war, but took off again in the early 1990s.

"The problem is we build without regard to resource availability," Farajalla said. "We tear down three-storey buildings and put a 20-storey building in its place. This a developmental issue now, and on top of the nearly two million refugee influx, it is enough to cripple the system."

Water mismanagement is to blame for exacerbating the impact of drought, with no checks on the thousands of often profitable, illegally drilled wells, and little water harvesting and conservation or alternative farming practices. Instead, most rainwater simply evaporates or flows into the sea.

While commercial water trucks idle on city streets and daily power cuts are a way of life, the government's national water strategy, which aims at mapping map all drilled wells, building dams and replenishing aquifers, is mired in the backroom dealing of Lebanese politics.

"An example of mismanagement is that everyone comes up with something to adapt to the drought, instead of having a government plan that kicks in immediately to really cut down on water use," said Farajalla. "But nothing is happening."

Back on Lake Qaraoun, farmer Elias Abu Khazen said villagers grew desperate when they realized government help was not on the way. Instead, they organized themselves. They raised funds to build a new well with an electric pump, and each pays around $27 to water their fields for an hour.

They now want to build a small reservoir, plant less thirsty crops and use water-saving irrigation methods. "But we don't have the money or expertise," said Abu Khazen.

He chuckles. "On September 14, we celebrate our Christian Maronite holiday called the Festival of the Cross," he said. "For 12 days after this date, each day is relative to every month of the year, weather-wise. So we know how the year will look."

Hassan is a Syrian field hand from Aleppo, who lives and works with around 300 other seasonal laborers in the fields around Ain Zebdeh.

"My family used to have cattle and sheep," Hassan said. "We would move them around to several places because they were so thirsty. Remembering that time, I feel scared now that this drought will also harm us."

ICARDA's Hassan Machlab said: "One year is dramatic, but not that dramatic if we have a normal year again, and the ground water will be replenished. But if this happens for a second year, and then another, the water could be finished."

Russia-Ukraine war
Two more ships with grain depart from Ukraine, says Turkey's defence ministry
Arts
Salman Rushdie attack: British author on ventilator and ‘likely to lose one eye’
Gaza Under Attack
The race against time in Gaza to save people under rubble