Writing wrongs in East Jerusalem: A 16-year-old poet speaks out

Mohammed al-Qurd, 16, has chosen poetry and writing as his way of peacefully resisting the Israeli occupation of his land and home Six years ago, half of the al-Qurd family home was occupied by Israeli settlers who remain there to this day (MEE/Michaela Whitton)
By
Michaela Whitton

SHEIKH JARRAH, East Jerusalem - 16-year-old Palestinian poet and aspiring writer Mohammed al-Qurd reads from his poem Jerusalem – the divine crime scene. Tall and slim with a depth and maturity beyond his years, Mohammed admits he is shy when meeting new people. Writing is his chosen mode of expression and his way of peacefully resisting the Israeli occupation of his land and home.

In 2009, a group of radical Israeli settlers stormed the al-Qurd family home, taking over half of the house. Mohammed’s grandmother Rifka was hospitalised following the incident and the family's furniture was destroyed. Mohammed recalls the settlers sitting around a fire in the family’s front garden as they burned his younger sister’s bed. His father, Nabeel, tells Middle East Eye that the family has not set foot in that part of their house since.

Six years later, in what’s become one of the most breathtaking examples of Israel’s creeping settlement enterprise, the settlers live in the front of the home and the al-Qurds in the back. Sheikh Jarrah residents, like thousands of other Palestinians in the West Bank and East Jerusalem, constantly live with insecurity, fear of eviction and harassment. While complex legal processes continue for families in the neighbourhood, Jews from all over the world are able to move to Israel and the occupied territories while Palestinians continue to be expelled from, or are unable to return to, the land of their birth.

‘’I would like to declare to every Zionist out there that the Promised Land is not in my back yard. Go and look somewhere else please.’’ Mohammed al-Qurd, age 16.

Mohammed has already penned his own book, Tomorrow is never coming. Chapters include titles such as "Walking towards yesterday," "16 year old terrorist," "The villain within us" and "The slaughter of destiny". He describes the book as ‘’poetically distinguishing the problems that we have in Palestine and the world’’ through criticism of blind faith, encouragement of women’s participation in the Palestinian struggle, the challenging of God as a real estate agent and questioning the stereotypes of a terrorist. He hopes it will be published one day.

Mohammed says his poetry is not designed to comfort but to make people feel guilty. He hopes feelings of guilt provoke people to act. "When I recite a poem and somebody cries, I know I have succeeded - which happened with you.’’ Mohammed was very pleased I shed a tear as he read his poem "I".

There is death
in the eye of a newborn
a fetus tragedy is re-singing
the same old floating catastrophe
and in ears there is storm
only raging for silence
what do you do
when your destiny is already
embroidered in the womb?

There is a face
written
but unread
with the ink of experience
I write the future
the heart of thunder
and the eye of lightening
only dance to the beat of
‘stop!’

Dare stop a lung
that only pleads
to be heard
breathing.

Born on the day of the catastrophe

Adamant that he "doesn’t believe in spiritual stuff," Mohammed likes to think there’s a reason he was born on the anniversary of the Nakba. He says the black balloons Palestinians fly on Nakba day sum up how he feels. He doesn’t celebrate his birthday.

Unsurprisingly for someone who was forced out of half of his home using the justification of a Holy Book, he vehemently wrestles with religion. "Religion these days is just a cover for people to find excuses for their crimes," he tells me.

Mohammed’s grandparents moved to Haifa after marrying. He says they were rich and had a cafe on the beach. ‘’It makes me cry because if they had stayed rich I would have an iPhone,’’ he says with a grin. The family lost everything after being forcibly evicted from their homes. In the early 1950s along with 27 other families chosen by UNRWA, they were moved to Sheikh Jarrah and, in return for giving up some of their rights as refugees, they were given new homes. When Israel annexed East Jerusalem in 1967, Sheikh Jarrah was one of the areas targeted by the settlement movement. Settlers demanded that ownership of the lands the homes were built on be given to them and the residents evicted.

In the 2009 documentary "My Neighbourhood" which Mohammed narrated at age 12, Yonatan Yosef, spokesperson for the Sheikh Jarrah settler movement, said: "We take house after house because we proved in the court that this area belongs to the Jews. Because of that, all this area we will make a Jewish neighbourhood. Our dream is that all of East Jerusalem will be like West Jerusalem, Jewish capital of Israel.”

When asked about rights to the land, Myron Joshua, an Israeli Jew living in a kibbutz in the Gush Etzion settlement bloc, said, "It is not about Jewish rights to the land but about deep Jewish connection and the desire (and need) of the Jewish people for self-determination and fulfilling their collective lives in what is the cradle of their culture - and this through the accepted international political channels, such as the United Nations. Even if it meant being able to do so in only part of the historical homeland.’’

I questioned the "part of the historical homeland" bit, as many settlers believe they can live wherever they wish. Myron replied that, in the past, the majority of Israelis accepted this, as well as 50 percent of religious Zionists, but that this has eroded over the decades.

Mohammed's home is a depressing sight today. The front gate was ripped off by the settlers and torn Israeli flags blow in the wind. As the family expanded, Nabeel built an extension on the family home where six radical Israeli settlers and two dogs now live. They are part of a group that changes every few months. Messages of solidarity for the family painted on the walls in bright colours by international visitors have been covered with black paint. A dilapidated wooden structure daubed with a faded Star of David leans against the front of the house. According to Nabeel, it has been there for three years and is a Sukkot tent. During the festival of Sukkot, some Jews erect structures in their gardens to symbolise the fragile dwelling places where the Jewish people lived in for years after being freed from slavery in Egypt. An irony not lost on many.

The family have had to hang blankets over the windows to separate the space and due to obscene gestures being made towards the women by the settlers from the windows. Over the years they’ve been spat on and sworn at. Mohammed thinks the settlers are paid to be there and says for some it is a career. “I mean, who wants to live in a neighbourhood full of Arabs? They can’t bear us right? We are terrorist people,” he says.

'Our roofs leak, but we still have roofs'

Asked about violence in the neighbourhood, Mohammed says things were worse a few years ago. “But if you compare our situation to the problems they have in Bilin or Bethlehem with settlers and military, we are lucky, or in Gaza. At least we have roofs over our heads. Our roofs leak but we still have roofs.”

At a young age, Mohammed became aware of the difference in Israeli right- and left-wing politics. Hundreds pouring into Sheikh Jarrah to attend the weekly demonstration brought global attention to the situation and seeing Israelis supporting his struggle gave him hope. His thoughts on this now are less than hopeful.

He is not pointing fingers but believes the situation reflects hypocrisy and double standards, and that some are only in solidarity with Palestinians if they "fit with their ideology and standards". He gives the summer war on Gaza as an example: "Where was the solidarity then? If they are only supporting a surrendering people then they are supporting the wrong kind of people. It’s our right to resist. What would you do if your homeland was being devoured by evil? You would fight back and not choke."

Israeli activist Ofer Neiman claims that part of the reason the Sheikh Jarrah demonstration has withered is due to internal divisions among activists. Bleakly, he said there’s a "growing collective wisdom as to the reality of not being able to change things from within Israel". Some activists are taking a hiatus and reconsidering the required strategy, others are focusing on BDS.

To Mohammed, it doesn’t feel like the same demonstration anymore. He says that signs that previously said "Free Palestine" and "End the Occupation" now only relate to Israeli politics. "It’s been turned into a platform for stuff which doesn’t support our struggle," he says.

When the terrorist is white

In the documentary "My neighbourhood," Mohammed proudly showed off his small library of books. Asked what he reads now, he says he has a big library. He shows me a photo of his library on his bedroom windowsill. He likes authors who write about the Palestinian struggle, ancient poets as well as books on human rights, freedom and religion. "I really love Voltaire." He asks, "Have you read Candide?"

Mohammed has printed out a portrait of Frida Kahlo for his school art class. In a "show-and-tell" activity, he wants to discuss her with kids in his class. “I’m a 16-year-old boy and everyone at school wants to be the image society creates for them, but individuality and identity is a great thing. I want to focus on that."

An influence in his teenage years was Lady Gaga’s album "Born This Way". He describes feeling empowered by her lyrics about self-acceptance, courage and fighting for your beliefs. When she played Tel Aviv in 2014, he was devastated. He wrote her a letter. "I was like, seriously? I don’t think she understands much about the situation because the Zionist propaganda in the US is blinding and dishonest."

Mohammed sings the words to "Feeling Good" by Nina Simone. I ask him if he has heard the song "Baltimore". He hasn’t, so we play it and he immediately relates it to the struggle to Jerusalem. He downloads it immediately to listen to later; he doesn’t have wi-fi at home.

Mohammed thinks he can sometimes be a bit negative and see the cup as half-empty. “But I only see it as half-empty so I can fill it,” he says. After the brutal murders of the three American Muslims in Chapel Hill, he wrote this poem:

When the Terrorist is White. A poem for Yousor, Deah and Razan

When the terrorist is white
there won’t be any billboards
undermining, corrupting, and tarnishing
the image of a whole nation
there wouldn’t be generalising
nor would be any criminalising
due to race; discriminate a population
there won’t be anyone talking down to
a sixteen year old, who has nothing to do
with chaos

loaded with cynical hateful vows
and a bullet that is made a national-hero
reaching.

When the terrorist is white
there won’t be apologies
nor will there be mourning
this is the American good heart,
white heart,
advocating
the intricately satisfied
---yet blind--- 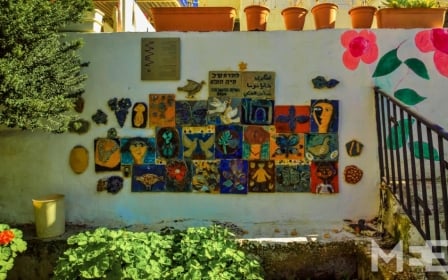