Iraq and the American cult of bombing

William J. Astore
Few Americans question the sanity of American presidents as they continue to seek solutions to complex issues by bombing Iraq 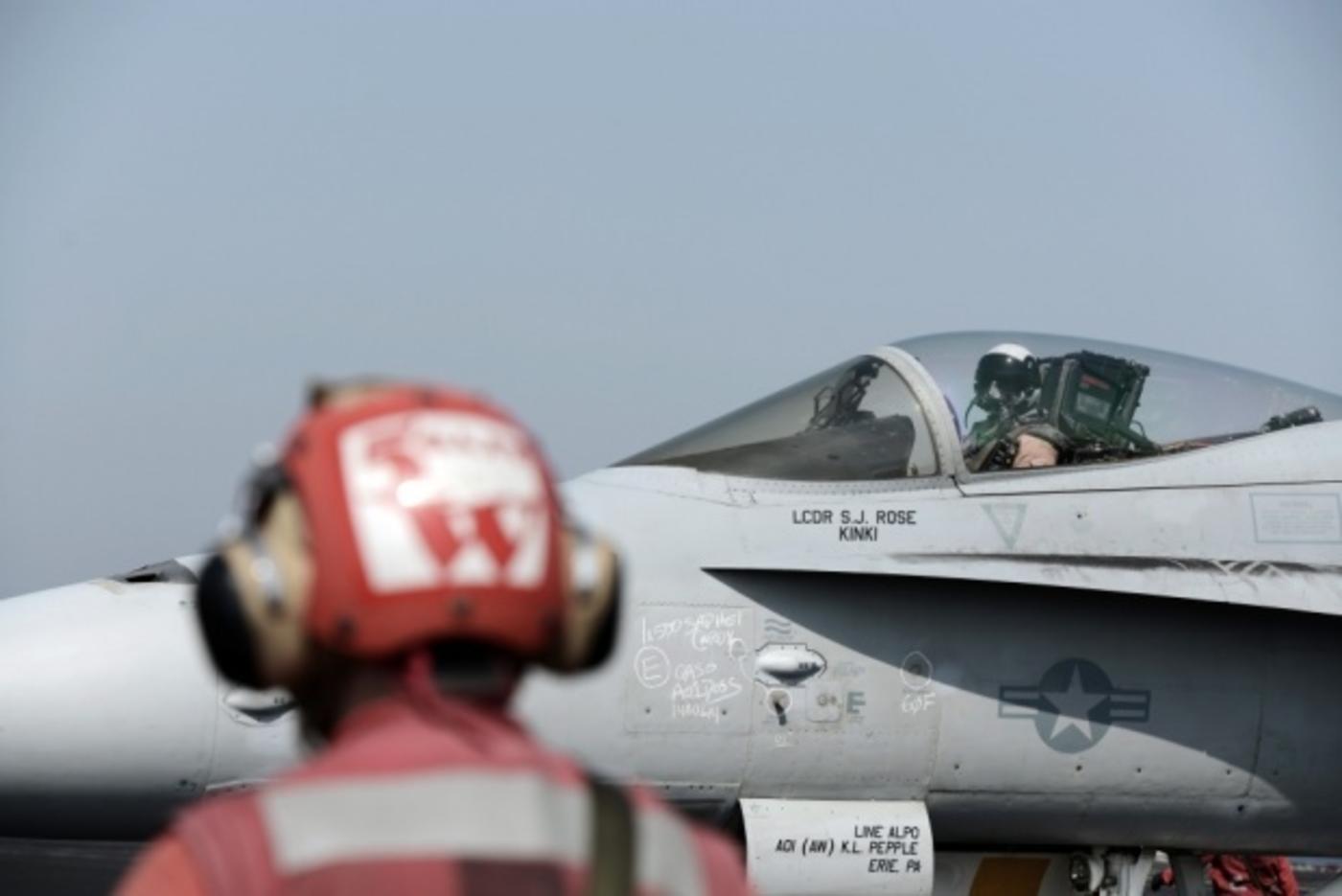 Why you should expect more bombs to be dropped everywhere

When you do something again and again, placing great faith in it, investing enormous amounts of money in it, only to see indifferent or even negative results, you wouldn’t be entirely surprised if a neutral observer questioned your sanity or asked you if you were part of some cult.  Yet few Americans question the sanity or cult-like behaviour of American presidents as they continue to seek solutions to complex issues by bombing Iraq (as well as numerous other countries across the globe).

Poor Iraq. From Operation Desert Shield/Storm under George H.W. Bush to enforcing no-fly zones under Bill Clinton to Operation Iraqi Freedom under George W. Bush to the latest “humanitarian” bombing under Barack Obama, the one constant is American bombs bursting in Iraqi desert air.  Yet despite this bombing -- or rather in part because of it -- Iraq is a devastated and destabilized country, slowly falling apart at seams that have been unraveling under almost a quarter-century of steady, at times relentless, pounding.  “Shock and awe,” anyone?

Well, I confess to being shocked: that US airpower assets, including strategic bombers like B-52s and B-1s, built during the Cold War to deter and, if necessary, attack that second planetary superpower, the Soviet Union, have routinely been used to attack countries that are essentially helpless to defend themselves from bombing.

In 1985, when I entered active duty as an Air Force lieutenant, if you had asked me which country the US would “have” to bomb in four sustained aerial campaigns spanning three decades, among the last countries I would have suggested was Iraq.  Heck, back then we were still helping Saddam Hussein in his war against Iran, sharing intelligence that aided his military in pinpointing (and using his chemical weapons against) Iranian troop concentrations.  The Reagan administration had sent future Bush secretary of defense Donald Rumsfeld there to shake Saddam’s hand for a photo op.  We even overlooked Iraq’s “accidental” bombing in 1987 of a American naval vessel, the USS Stark, that resulted in the death of 37 American sailors, all in the name of containing Iran (and Shia revolutionary fervor).

It’s said that the enemy of my enemy is my friend, but Saddam didn’t remain a friend for long.  Emboldened by US support in his war with Iran, he took Kuwait, only to initiate the first round of devastating US air raids against his military during Desert Shield/Storm in 1990-1991.  As these and subsequent bombing campaigns damaged and debilitated Iraq, contributing to Saddam’s overthrow in 2003, the Shia majority in that country found common cause with Iran, strengthening one branch of militant Islam.  At the same time, the general destabilization of Iraq from a generation of air war and invasion has led to a Sunni revolt, the strengthening of an al-Qaeda-style movement, and the establishment of a “caliphate” across significant parts of Iraq (and Syria).

Now, given that less-than-stellar record, does anyone want to hazard a guess about the next American response to peoples and leaders our government doesn’t like in Iraq or the rest of the Middle East?  My money is on more bombing, which surely requires explanation.

If one weapon captured the image of the former Soviet Union, it was the main battle tank.  From T-34s during World War II to T-72s near the end of the Cold War, the Russians cranked them out like sausages.  And if one weapon captured the image of the US, then and now, it has surely been the bomber, whether of the strategic or heavy variety (think B-52) or the tactical or fighter-bomber variety (think the F-105 in the Vietnam years, the F-15 “Strike Eagle” in Iraq, and for the future, the most expensive weapons system of all time, the F-35).  As the richer superpower, the US cranked out high-tech bombers like so many high-priced sausages.

“The bomber will always get through.”  That article of faith, first expressed in 1932 by Stanley Baldwin, thrice Prime Minister of Britain, was seized upon by US airpower enthusiasts in the run-up to World War II.  Despite decidedly mixed and disappointing results ever since, bombing remains the go-to choice for American commanders-in-chief.

What we need in 2014 is a new expression that catches the essence of the cult of US air power, something like: “The bomber will always get funded -- and used.”

Let’s tackle the first half of that equation: the bomber will always get funded.  Skeptical?  What else captures the reality (as well as the folly) of dedicating more than $400 billion to the F-35 fighter-bomber program, a wildly over-budget and underperforming weapons system that may, in the end, cost the American taxpayer $1.5 trillion.  Yes, you read that right.   Or the persistence of US plans to build yet another long-range “strike” bomber to augment and replace the B-1 and B-2 fleet?  It’s a “must-have,” according to the Air Force, if the US is to maintain its “full-spectrum dominance” on Planet Earth.  Already pegged at an estimated price of $550 million per plane while still on the drawing boards, it’s just about guaranteed to replace the F-35 in the record books, when it comes to delays, cost overruns, and price.  And if you don’t think it’ll get funded, you don’t know recent history.

Heck, I get it.  I was a teenager once.  In the 1970s, as an Air Force enthusiast and child of the Cold War, I hugged exotic and therefore pricey bomber jets to my chest. (Well, models of them, anyway.)  I considered them to be both uniquely American and an absolute necessity when it came to defending our country against the lumbering (but nevertheless menacing) Soviet “bear.”  As a result, I gasped in 1977 when President Jimmy Carter dared to cancel the B-1 bomber program.  While I was a little young to pen my outrage, more mature critics than I quickly accused him of being soft on defense, of pursuing “unilateral disarmament.”

Back then, I’d built a model of the B-1 bomber.  In my mind’s eye I still see its sexy white body and its rakish swing wings.  No question that it was a man’s bomber.  I recall attaching a firecracker to its body, lighting the wick, and dropping the plane from the third-floor porch.  It exploded in mid-air, symbolic to me of the plane’s tragic fate at the hands of the pusillanimous Carter.

But I need not have feared for the B-1.  In October 1981, as one of his first major acts in office, President Ronald Reagan rescinded Carter’s cancellation and revived the mothballed program.  The Air Force eventually bought 100 of the planes for $28 billion, expensive at the time (and called a “turkey” by some), but a relative bargain in the present budgetary environment when it comes to bombers (but these days, little else).

At that point, I was a young lieutenant serving on active duty in the Air Force.  I had by then come to learn that Carter, the peanut farmer (and former Navy nuclear engineer), was right.  We really didn’t need the B-1 for our defense.  In 1986, for a contest at Peterson Air Force Base where I was stationed, I wrote a paper against the B-1, terming the idea of a “penetrating strategic bomber” a “flawed strategy” in an era of long-range air-launched cruise missiles.  It earned an honorable mention, the equivalent of drawing the “you have won second prize in a beauty contest” card in Monopoly, but without the compensatory $10.

That “penetrating,” by the way, meant being loaded with expensive avionics, nowadays augmented by budget-busting “stealth” features, so that a plane could theoretically penetrate enemy air defenses while eluding detection.  If the idea of producing such a bomber was flawed in the 1980s, how much more is it today, in an age of remotely-piloted drones and missiles guided by GPS and in a world in which no country the US chooses to bomb is likely to have air defenses of any sophistication?  Yet the Air Force insists that it needs at least 100 of the next generation version of them at a cost of $55 billion.  (Based on experience, especially with the F-35, you should automatically double or even triple that price tag, cost overruns and product development delays being a given in the process.  So let’s say it’ll cost closer to $150 billion.  Check back with me, God willing, in 2040 to see whether the Air Force’s figure or mine was closer to reality.)

Idols for worship, urges to satisfy

Obviously, there are staggering amounts of money to be made by feeding America’s fetish for bombers.  But the US cult of air power and its wildly expensive persistence requires further explanation.  On one level, exotic and expensive attack planes like the F-35 or the future “long range strike bomber” (LRS-B in bloodless acronym-speak) are the military equivalent of sacred cows.  They are idols to be worshipped (and funded) without question.  But they are also symptoms of a larger disease -- the engorgement of the Department of Defense.  In the post-9/11 world, this has become so pronounced that the military-industrial-congressional complex clearly believes it is entitled to a trough filled with money with virtually no accountability to the American taxpayer.

Add to that sense of entitlement the absurdist faith of administration after administration in the efficacy of bombing as a problem solver -- despite overwhelming evidence to the contrary -- and you have a truly lethal combo.  Senator John McCain was widely mocked by progressives for his “bomb Iran” song, warbled during the 2008 presidential campaign to the tune of the Beach Boys's "Barbara Ann."  In fact, his tuneless rendition captured perfectly Washington’s absolute faith in bombing as a solution to... whatever.

Even if the bombs bursting over Iraq or elsewhere don’t solve anything, even when they make things worse, they still make a president look, well, presidential.  In America, land of warbirds, it is always better politically to pose as a hunting hawk than a helpless dove.

So don’t blame the Air Force for wanting more and deadlier bombers.  Or don’t blame only them.  Just as admirals want more ships, flyboys naturally want more planes, even when strategically obsolete from scratch and blazingly expensive.  No military service has ever willingly given up even a tiny slice of its share of the prospective budgetary pie, especially if that slice cuts into the service’s core image.  In this sense, the Air Force takes its motto from King Lear's “Reason not the need!” and from Zack Mayo's “I want to fly jets!” (memorably uttered by that great Shakespearean actor Richard Gere in An Officer and a Gentleman).

The sad truth runs deeper: Americans evidently want them, too.  More bombers.  More bombs.  In the movie Top Gun, Tom Cruise’s Maverick got it all wrong.  It’s not speed Americans feel a need for; they have an urge to bomb.  When you refuse to reason, when you persist in investing ever more resources in ever more planes, use almost automatically follows.

In other words, fund it, build it, and, as promised in the second half of my equation, the bomber will always get used.  Mock him all you want, but John McCain was on to something.  It’s bomb, bomb, bomb, bomb bomb if not (yet) Iran... then Iraq, or Pakistan, or Libya, or Yemen, or (insert intransigent foreign country/peoples here).

And like cults everywhere, it’s best not to question the core belief and practices of its leaders -- after all, bombs bursting in air is now as American as the "Star Spangled Banner."

Photo: An F/A-18C hornet prepares for take-off for Iraq from the flight deck of the aircraft carrier USS George H.W. Bush on August 14, 2014 in the Persian Gulf (AFP)