The Falcon has landed: the problematic rise of Egyptian private security 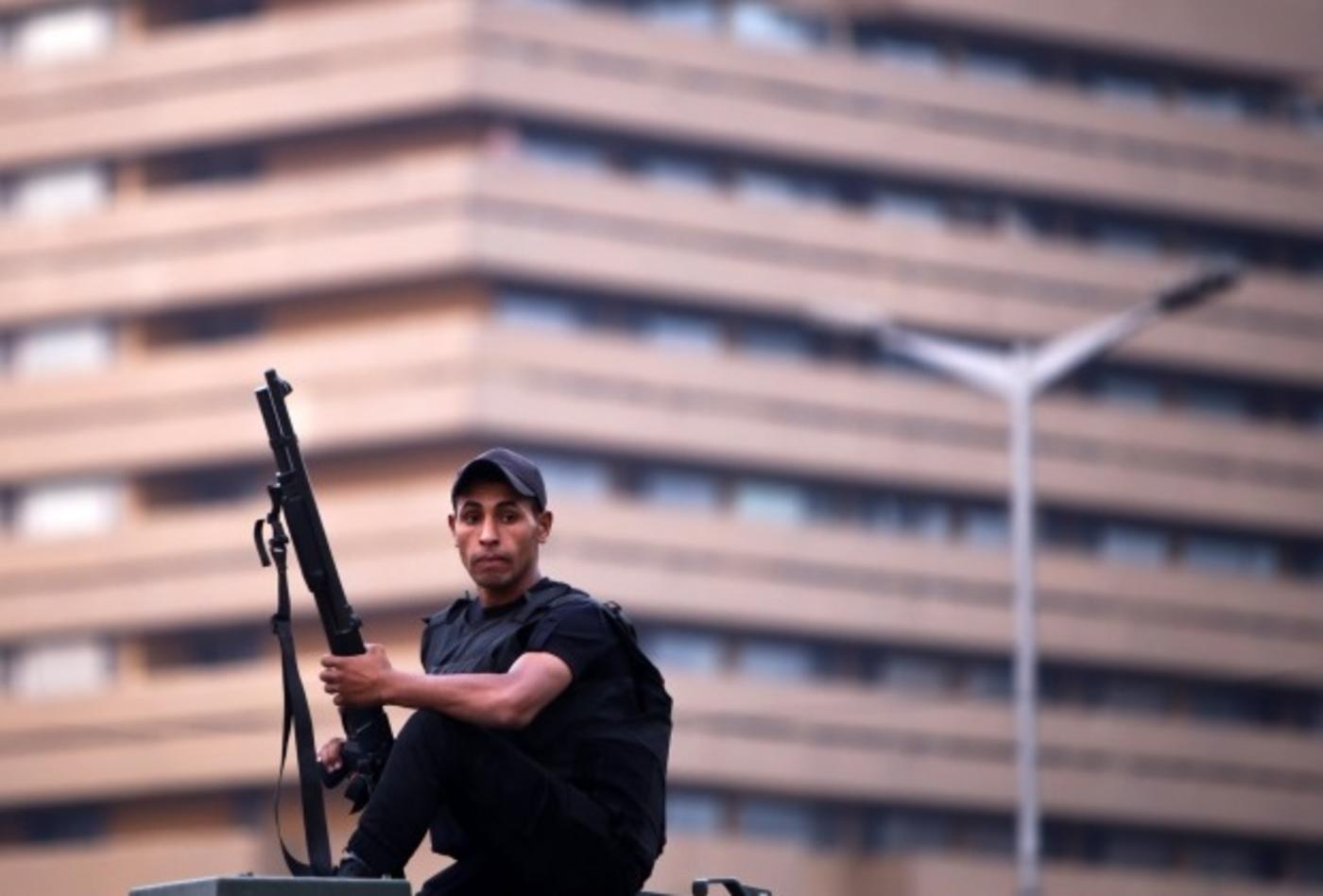 A member of Egyptian security forces monitors near Cairo University after a bomb exploded on 22 October, wounding at least nine people including a senior officer (AFP)
Par
Alessandro Accorsi and Giovanni Piazzese

A few days before the start of the academic year on 11 October, the Ministry of Education contracted a major Egyptian security company, Falcon Group, to secure the gates of 15 public universities across the country and the Cairo campus of Egypt’s pre-eminent Islamic university, Al-Azhar.

While security forces have managed to crackdown on street protests, since the military’s ouster of former president Mohamed Morsi in July last year and the subsequent heavy crackdown on freedoms, student protests have been among the last bastions of opposition. And the protesters have paid a heavy price.

According to a 2010 court decision, police forces are not allowed to enter universities unless crimes are committed. With the implementation of a controversial Protest Law last year, demonstrations became illegal unless police sanctioned. So when student protests erupted last year, police forces stormed campuses.

With the dawning of a new academic year, President Abdel Fattah al-Sisi, who took over running the country’s affairs after leading Morsi’s ouster, and Prime Minister Ibrahim Mahleb, were confronted with the dilemma of how to avoid an escalation of protests, said Ahmed Ezabawy, a researcher at the state-run Ahram Center for Strategic Studies.

Hiring Falcon was seen as a way to defuse tensions on campuses. The company installed electronic gates behind heavy steel bars at campus entrances with the stated aim of containing violence if riots break out on university grounds.

It didn’t work. Protests and violence broke out anyway. And some say the security company exacerbated an already tense situation. In the first week of the new semester, at least 195 university students were arrested across Egypt for protesting Falcon’s presence. The night before the academic year opened, heavily armed police raided 250 homes across the country, arresting 71 students.

“Sisi could not send the police in or use the army upfront, so he thought that private companies might be less hostile to students,” Ezabawy told the Middle East Eye.  “In fact, he made things worse because Falcon were still seen by students as intrusive or an extension of the police.”

“As I was entering through Cairo University gates, like I have always done, I realized that it didn’t seem to be normal again. I went through unusual security procedures, which I thought that I wouldn't mind, until the security officer started to address me in an unjustifiably offensive tone,” wrote Reem Khorshid.

In her account, Khorshid said that despite the heavy security presence, she did not feel safe.

“We sit inside our classes with our fingers crossed, hoping nothing horrible happens outside,” said Khorshid. “In the end, there are too many security guards and Falcons present, but students barely feel safe. We all know this is not how an academic environment should be.”

Tensions had built up between students and the government after at least 16 students were killed on university campuses last year.

According to Ezabawy, Falcon’s security guards were unable to defuse tensions this year, “because they were not skilled or trained enough and because they are left to secure the gates, but have no control on what happens outside or inside the universities, so they are pretty useless.”

The rise of Egyptian private security

Falcon was set up in 1974 and lists a number of major international and local organisations and corporations among its clients. These include the United Nations, The World Bank, HSBC, the Central Bank of Egypt, Coca Cola, BP and others.

According to Ahmed Emam, country president of the Egyptian branch of Securitas, a Swedish multinational security firm, “many private security companies still rely on cheap and poorly trained manpower instead of focusing on training or technology.”

The private security sector has rapidly grown in the wake of the gap left by a retreating police force that was unable or unwilling to provide security after the 2011 uprising.

“For the first time citizens came to us asking for our services,” said Emam. “People started feeling insecure and our job was easier, as we didn’t have to explain why they needed our services."

Despite this rise, there is no specific legal framework governing the sector. Starting a new security firm is understood to be a fairly easy process in Egypt, taking just a few hours, as it only needs a commercial entity registration.

Under Morsi’s administration, there were talks of a law to regulate the sector, something the firms themselves are lobbying for.

“Introducing a new law governing them would legalise a state that already exists de facto and normalise the situation,” said Karim Ennarah, a legal researcher at the Egyptian Initiative for Personal Rights, a Cairo-based non-governmental organisation. “That would lead to a further expansion of their business volume.”

Why and how Falcon was chosen among all the other companies to undertake the sensitive task of securing universities is not clear. The Ministry of Education didn’t appear to put out a public bid for the contract, or consult other security companies. The Ministry and Falcon declined requests for information.

An Egyptian media outlet and Emam claimed there is a “special relationship” between Sisi, pro-government tycoon Naguib Sawiris and Falcon, hinting at a personal connection between the president and the firm’s executive director, Sharif Khaled.

“I don’t know why the contract was assigned to them but after Sisi’s election [in June], Falcon has suddenly and greatly expanded,” said Emam.

In September, Falcon was contracted by the Ministry of Defence to provide security during a high-tension football match between Egypt and Tunisia attended by nearly 15 thousand fans.

According to Suleiman, the former general, most security companies are managed by former generals and high ranking officials with good connections to the government and Interior Ministry, which runs Egypt’s police force, a notion that leaves activists concerned.

“We don’t want more people with weapons and problems of accountability," said Ennarah, the legal researcher for the Egyptian Initiative for Personal Rights. "We already have a problem with holding police accountable and enforcing the law."