The Casbah of Algiers’ last breath 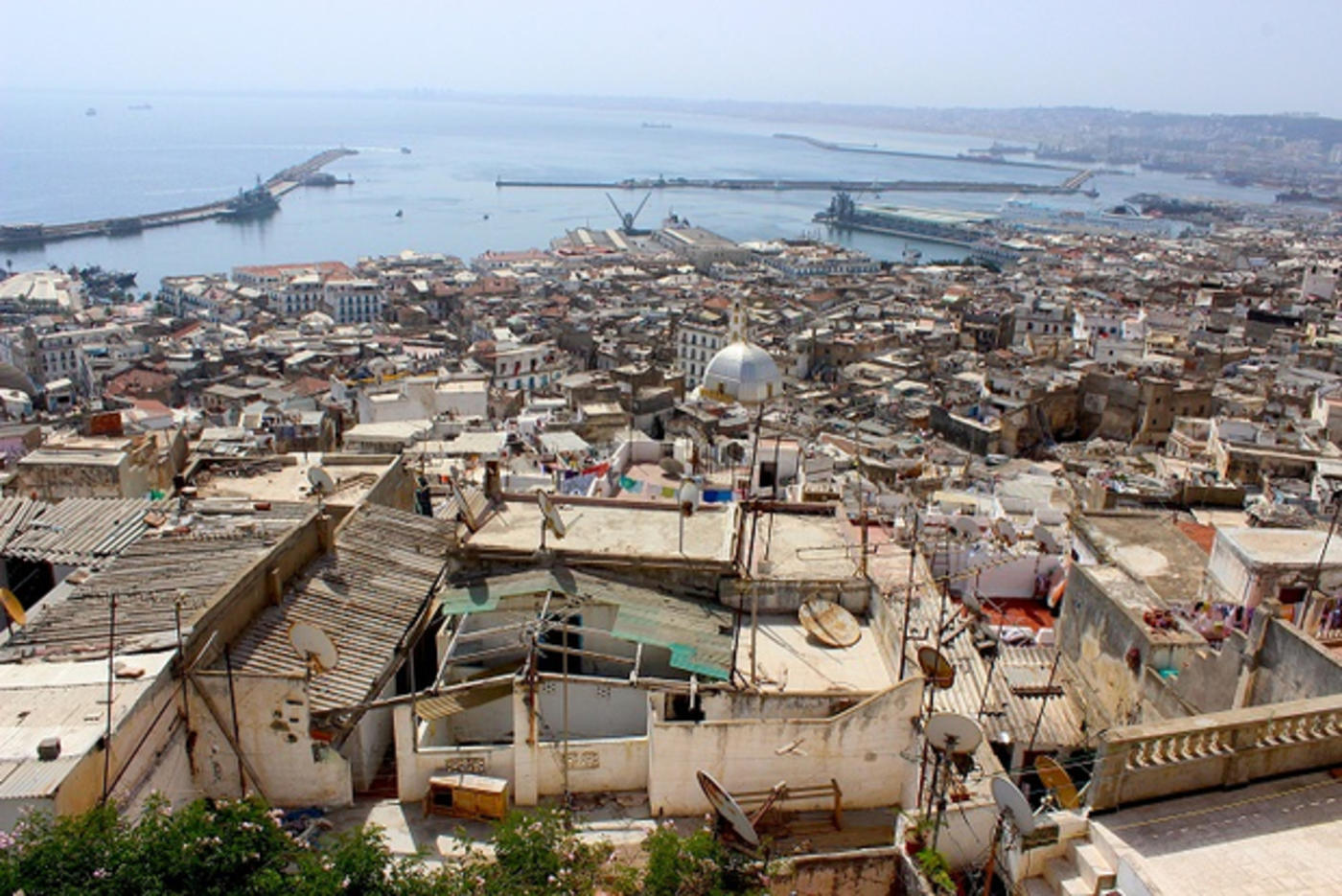 ALGIERS - Here, like a forgotten theater set, houses with walls that have partly collapsed barely support Moorish arches hanging in the void. There, metal sheets try to hide dumps but fail to conceal their stench.

"The seventeenth century buildings have collapsed," says L’hadi Bendebka, an Algerian guide and lawyer specialised in real estate, who helplessly views the disintegration of the Old City of Algiers. "Those of the 18th century are beginning to crumble. At this rate, in 30 years there will be nothing left of the Casbah."

Neither international organisations nor the state could prevent the weather, climate, earthquakes or humans from weakening this unique site, classified as a World Heritage Site by UNESCO since 1992. It has been inhabited since at least the sixth century BC, then by the Phoenicians. Its contours are marked with Ottoman-era fortifications. Today, all that remains of the model city that once influenced urban planning in the Western Mediterranean and sub-Saharan Africa are only sepia photos that the Casbah’s elderly residents hang on the walls of their workshops, or on their shop windows as a last proof of past splendor that will never be restored.

Khaled Mahiout’s pictures are displayed among wooden stencils, family photos and press clippings in honour of his father. Seven years ago, the Algerian state decided to restore the traditional house that belongs to this cabinet designer. "Unfortunately, due to a lack of competent craftsmen, the government suspended the work," he told Middle East Eye during a visit to the site.

"I try to get rid of the rubble that workers have left behind. And I can not even resume the restoration myself due to conditions imposed by the Algerian state that require artisans to have experience and funds, both of which Algerians do not possess."

However, this is an emergency situation: since the neighbouring house was razed to the ground in 1982, Mahiout’s house's walls are rotating. But for this son of the Casbah, there are more serious issues than the prospect of never seeing his house renovated: his neighbours, the "new" residents, who are foreign to the rules of urban planning and, worse still, ignorant of the rules of the Casbah.

"They removed the doors and the balustrades; they clogged wells and built on terraces!" he says nervously. "I cannot live next to these people."

Further down the street, a smell of excrement and sewage is overwhelming. "When the summer came and the fountains dried up, the Casbah’s inhabitants, in order not to go down to town to fetch water, built djoubs (tanks) under the houses, to collect rainwater," L’hadi Bendebka explained to MEE.

"When new residents arrived, they built toilets on each floor and connected pipes to the djoubs. And since wastewater is not discharged, they stagnate under the house, consequently causing this terrible smell."

The Casbah’s traditional organic constructions made of clay, wood and stone, without a solid foundation, cannot endure in the long-term. According to the Office of Management and Development of Cultural Property, an Algerian public organisation, 400 empty plots (17 percent of the housing stock in the Casbah) and nearly 1,200 buildings in ruins "threaten the stability of the entire urban fabric" of the Casbash.

There have, however, been backup plans initiated by the state.

One of the plans, called the "Plan for Permanent Safeguarding and Improvement of the Casbah of Algiers," with an allocated budget of almost $900 million, dates back to 2012. In order to assist restoration operations, the Algerian state sought to buy back the properties from owners by providing them with temporary housing.

"Except that it is practically impossible to find the real owners, as many houses are being occupied by people who do not possess any property document," says Bendebka. "And even if we know which family owned the house, the owners, and often owners’ children, are too many to reach an agreement."

The majority of people who were displaced to the new dormitory towns in Algiers’ suburbs have gone back to the Casbah. "They quickly realised that they were missing the essential, neighbourhood ​​life," says Mahiout. Due to these population movements and the state restoration attempts, the Casbah has become an incredible money-making machine for heritage protection associations and a huge real estate speculation bubble. "People say: 'I sell high because the state will restore for free,’” said a resident. “As a result, the square-metre price has reached 6,000 Algerian dinars ($60)."

Such a situation disturbs Halim Faidi, an urban planner contacted by MEE. "Instead of being preoccupied with what to do with the Casbah for the coming 25 years – building a tourist city or a district of Algiers, for instance – they outline budget-consuming plans. Under the pretext that it belongs to world heritage, they think it is the state's job to handle it. However, authorities have neither the vision, nor the talent nor the skills to address this issue."

For the urban planner, however, the solution is "simple".

"We must assign the Casbah to the private sector, as has been the case in Sidi Bou Said in Tunisia or Marrakesh in Morocco. Otherwise, in 10 years it will no longer exist."

Since people who live there do not have the means to buy their homes, this would "revive the city, overpopulated, of two-thirds of its residents". Before the French came to Algeria, the Casbah was inhabited by 3,000 people; it now counts between 50,000 and 60,000 people, according to some estimates.

The abandonment of the artisans

In a basement lit by neon lights where he never sees the daylight, 54-year-old Said, one of the Casbah’s oldest coppersmiths - a son of the Houari Boumediene years and an inheritor of socialist ideology - sees the Casbah’s salvation as happening through the state only.

"It is the state’s responsibility to provide me with a big enough space to train apprentices," he told MEE. "If today I cannot work, it's because the state did nothing to protect the copper importers. The raw material is very hard to find! In order for tourists to come to the Casbah, they must be able to find souvenirs!"

A little further down, in what is called the Lower Casbah - a part of the citadel that was destroyed by the French who built a Haussmannian district - shopowner Halim also denounces the government’s policy vis-à-vis traders. His small shop, specialised in baking kalb elouz (semolina pastry soaked in honey), where more bees come in than customers, is a museum dominated by the colours of USMA, one of Algiers' two football clubs. On the store’s door, he has taped a black and white laminated portrait of Ali Lapointe, the hero of "The Battle of Algiers," Gillo Pontecorvo’s famous movie, surrounded by Hassiba Ben Bouali and Petit Omar, iconic figures of the Algerian resistance. These omnipresent semi-gods, who the Casbah residents refuse to forget, lurk at every corner.

"Me, I open for prestige. I do not make money," says Halim, pointing at his cakes which he sells for 45 dinars (20 cents) a piece. "But the state is imposing taxes on me while the merchant who stands on my doorstep and sells firecrackers, whose imports are normally prohibited by the law, is left in peace to go about his business because, for the sake of maintaining social peace, the government does not dare taxing informal traders."

Lit by the flame of his small soldering iron and neon lights, Jamaa Boudjemaa shakes his head. "They did not help us," he says of the invisible Algerian decision-making cabal. "Yet, the craft sector is the life of the Casbah. I do not have the means to buy gold, so I repair jewelry," he adds, seizing a small chain between his fingers.

“What I earn I use to buy bread and milk." Boudjemaa, however, does not give up. Beside the ventilating fans and some old photos that testify to his presence in the  Casbah for many years, he proudly shows the posters of movies such as The Patriot and Gladiator on which the actors’ faces have been replaced by his own.

Amid these whitewashed walls and paved streets polished by time, where men have left, the memories continue to resist. "As a child I used to stroll along this place with my father when we went to see football games," recalls Mohamed Rezala, editor of tourist guide books. "We used to stop by to get oublis [waffles] or créponné (Algerian lemon sorbet)". L’hadi Bendebka recalls Ramadan’s fragrances prisoners of the narrow streets, smells of the chorba (soup) or boureks (filled puff pastry roll). This is the soul of Algiers, whose patron saint, the Marabout Sidi Abderrahmane, rests in the mausoleum a few streets down. Nothing is capable of putting an end to the destruction of the Casbah, but it is just an attempt to say out loud that it is not going unnoticed.