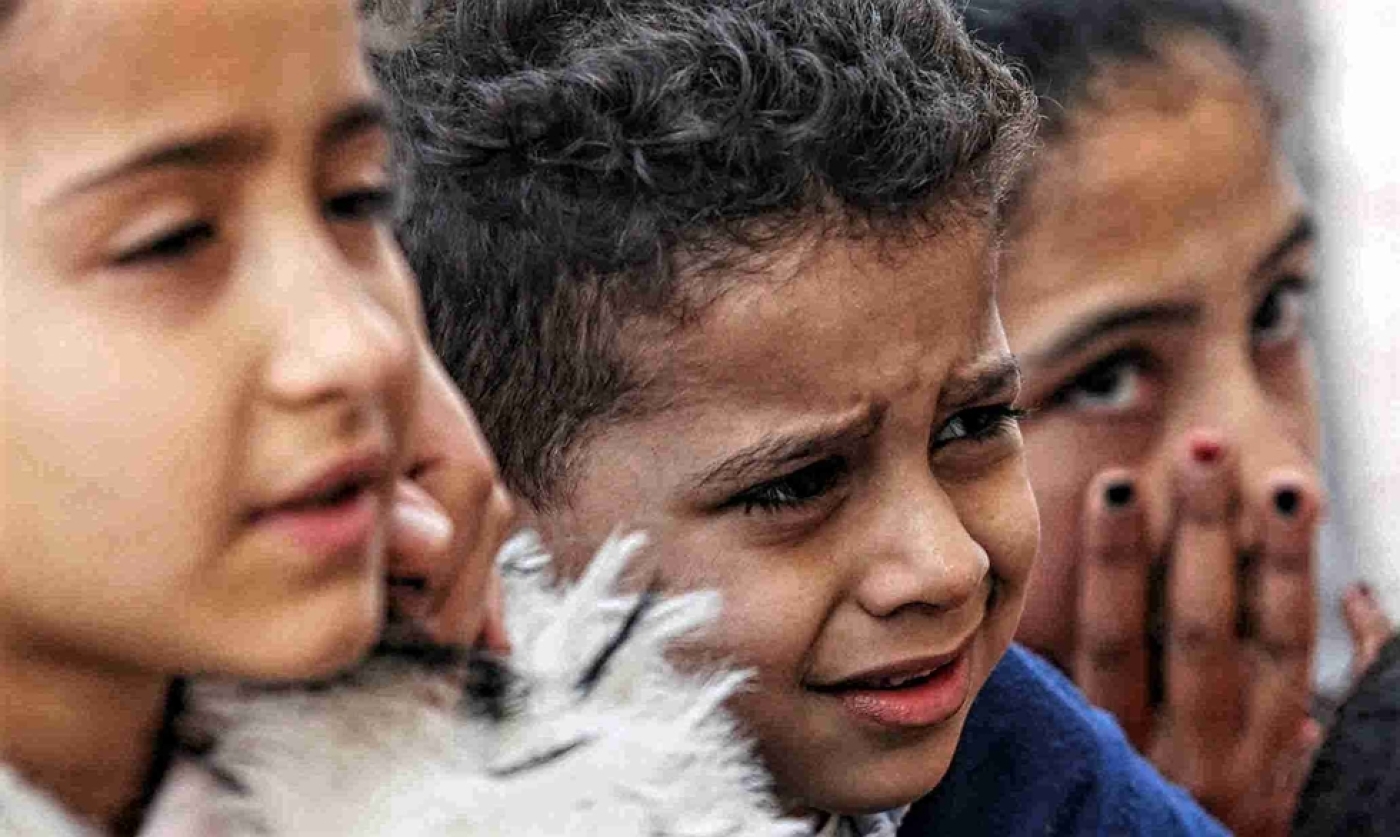 It was just before dawn and the end of the night curfew as Mourad and seven members of his family started what he calls their “journey of fear”.

They hired a took a bus and made their way from Arish, their home in Egypt’s northern Sinai, to the city of Ismailia, which they reached three hours later.

“We moved in big numbers in order to avoid being harassed by militants who sometimes hold checkpoints,” recalled Mourad, a father of three who, like many interviewed for this story, did not give his full name out of fears for his safety.

“This was the scariest part. We knew that the drivers and the truck owners had already been threatened by the militants.”

'The old man and his son who were killed, they were killed inside their home before the militants set it ablaze'

Mourad and his family are but some of the hundreds of Coptic Christians who have fled Arish after five members of their faith were shot dead and another two were burned alive by Islamist militants during the last few weeks, according to eyewitnesses and Egyptian officials. As yet no group has claimed responsibility.

The burned bodies of Saed Hanna, 65, and his son Medhat were thrown into the streets of Arish, a city that has been a centre of protests against President Abdel Fattah al-Sisi.

“The old man and his son who were killed, they were killed inside their home before the militants set it ablaze,” explained Mourad, who owns a small grocery store.

“Hours later the police came, and they started questioning the wife. Later they released her, without protecting her or keeping her in custody for her safety."

Moura’s family is currently being looked after by the Coptic Church In Ismailia, spending their days in a room which used to be a classroom. They will eventually move to live with his brother in the Cairo suburb of Shubra, which is heavily populated with Coptic Christians.

“Luckily, I can return to Cairo,” he said. “But the status of the people here is disturbing.”

Coptic Christians are the biggest religious minority in Egypt, accounting for an estimated 10 per cent of the population. But they have frequently been the target of attacks and discrimination from wider society.

In December, a bomb attack at the church of St. Peter and St. Paul in Cairo claimed the lives of 27 people and injured more than 40. The militant group Sinai Province, which is an affiliate of Islamic State (IS), claimed responsibility for the attack.

Sisi blamed the attacks in Arish on the “cowardly plot of evil forces” who want to strike at the country’s national unity. Amro Marwan, minister of parliamentary affairs, said on 26 February that 118 Coptic families had been displaced and arrived in four different governorates: 96 families had now sought refuge in Ismailia, 12 in Assuit, eight in Qualubia and two in Cairo. Two days later, that figure had risen to 154.

Sinai Province is a growing problem. In a video released before the Arish attacks, it vowed further violence against the Coptic community.

The group, which was originally called Supporters of Jerusalem, has been active in the region since 2011 and adopts a radical approach to Salafist Islam. It pledged allegiance to IS in November 2014 and is believed to want to turn the peninsula into an Islamist province.

Its operations are partly based on those of militant Gamaa Islamiya group, a militant Islamist group which operated in the country in the 1990s, especially in Upper Egypt, and lower working-class areas of eastern Cairo.

In recent years, Sinai Province has gained ground in Arish and the wider region with near-daily operations against security personnel, police, army informers – and Christians.

It appeals to the local community by distributing food, offering security or declaring solidarity. In areas where it finds support, it forces its teachings onto the population and intimidates and attack members of the Coptic community.

The attacks in Arish have spread fear and anxiety across the Coptic community. In Ismailia, displaced families have found refuge in the Saint Antionios Church and the Anglican Church as well as youth hostels. Others have been invited to stay in private homes. The Red Crescent charity have assisted by providing medical checkups and food rations.

Matta, a resident who rented a flat to a family, told MEE: “The terrorists will stop at nothing now after this victory of theirs. I am a Copt, and I am afraid because the so-called danger is only 120 minutes away from us. We are victims helping other unfortunate victims.” 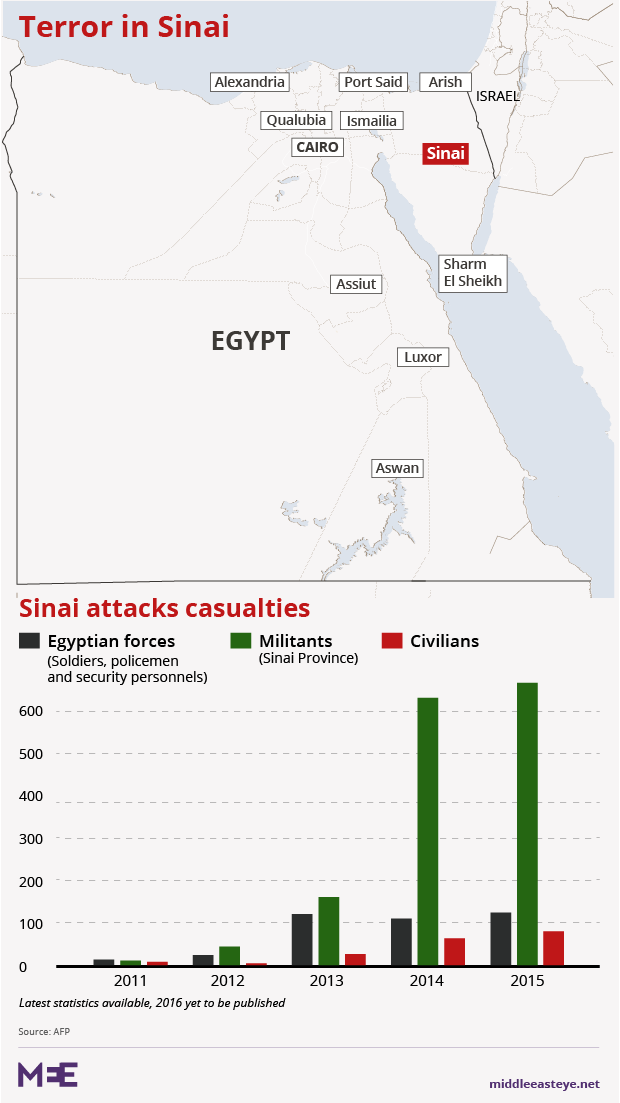 Morqous, a Copt who volunteers as an aid worker, said: “The situation looks like the war movies we see and the newspapers that show families crossing borders and fleeing terrorists. Most of these people want to return, but cannot guarantee their safety.”

He added: “In the end we are civilians, we can only offer food and shelter, temporarily. We cannot stand guard, nor do medical checkups on these people."

Officials including ministers of social solidarity and health have visited the affected families, offering each 1000 Egyptian pounds (around $60) as compensation, in addition to paying for school and medical fees.

But many believe it has not done enough. On Wednesday, Amnesty International said that "the government has failed to take action to protect Christians in North Sinai who have increasingly faced kidnapping and assassinations by armed groups over the past three years."

Morquos added: “The government is nowhere to be seen. They only condemn the acts on TV and through official statements, vowing to help.”

Shahenda, a nurse from Arish, fled to Ismailia with her elderly parents and brother, who is a university student at one of the Suez Canal universities. “He now risks not finishing the last semester," she explained, "and not being able to get a job in the government in Arish,”

Another concern is that her parents are both diabetic. “A pharmacist who lives in Islamilia donated the insulin dose to us, as we are very short in cash.”

'Where are the parliament members whom we voted for? Where are the army and their special forces who go to protect ministers and officials? Why aren't we protected?'

She also disagreed with comments by Magdy Abdel Ghaffar, the interior minister, that the authorities did not ask citizens to leave their homes. True, she said, there has been no official guidance - but lower ranking officers said that Coptics would not be safe in Arish, which she described as a ghost town after 6pm where even the police are wary of walking the streets.

“Where are the parliament members whom we voted for?” asked Shahenda. “Where are the army and their special forces who go to protect ministers and officials? Why aren't we protected?”

An army colonel, affiliated with the counter-terrorism department in North Sinai, told MEE that the attacks against Copts were being used to put pressure on the Egyptian state on the international stage and end military operations in Sinai.

He highlighted that the attacks took place after the Egyptian army and police raided the Halal Mountain in Arish, a militant stronghold.

“There can’t be a security guard for each citizen,” he told MEE. “Indeed, the army has eliminated 90 percent of the terrorist elements.”

But had lower ranking officers advised the citizens to leave for their own safety?

There has been some wider support for the plight of the Copts. A joint statement from human rights movements and NGOs condemned what they called sectarian attacks against the faith, criticising the government for not intervening enough and calling for more protection from the authorities for those Copts who chose to remain in the city.

But for those Copts who have already left their homes, the future is uncertain.

'How come they will solve the crisis, which has been going on for three years, in three days?'

Angel, a middle-aged women, was angry at the seeming indifference of the rest of Egyptian society. “They keep telling us we must shut up in order to not to become like Syria and Iraq, however the situation here is worse. People all over the country are living like nothing is happening, while hundreds of people are abandoning their houses, fearing some gangs who have guns and cars."

And she disbelieved official statements that the refugees will be able to return to Arish in three or four days.

“How come they will solve the crisis, which has been going on for three years, in three days?”

Mourad recalled how a delegation from the Azhar and Awkaq [Ministry of Religious Endowments] came to visit: “They told us that this violence was intended to jeopardise the unity of the state. The priests nodded their heads in agreement.

“They are refusing to confess that the strategy they are following is failing and that there is a power that is physically opposing the state, and that one of its enemies is Christians.”