'He wanted to chase them out so they crucified him': Inside IS-controlled Sirte MISRATA, Libya - Behind dark curtains in a hidden alleyway, for three days the family and friends of Milad Aburgeeba gathered to mourn for the man whose crucifixion last month in a public square offers a glimpse of the brutality of life and death in Islamic State-controlled Sirte.

“Milad was 41. He was married two years ago and only a year ago he became a father to a wonderful child,” Ibrahim, Milad’s cousin, told Middle East Eye.

“Then some IS men took him one morning from his home and accused him of spying. And then they crucified him.”

In the aftermath of the 2011 Libyan revolution, the home city and final bastion of long-time Libyan leader Muammar Gaddafi had slipped into a lawless power vacuum from which the Islamist militant group Ansar al-Sharia emerged to restore order.

Despite Ansar al-Sharia being blamed for the killing of Chris Stevens, the American ambassador, in an attack on the US consulate in Benghazi in 2012, many in Sirte had initially viewed the group positively.

“After the revolution in 2011 our city was abandoned by everyone. It was as if Sirte alone was paying for its history. We were tarnished,” said Ibrahim, who eventually fled Sirte to Misrata with his family last August.

“The only people who helped us were the men of Ansar al-Sharia. They were Salafis and extremists, but they helped us. They patrolled the streets and carried food, water and aid for our children in the schools.”

But that changed in March last year when Ansar al-Sharia’s local leaders publicly declared their allegiance to IS.

“Black flags began appearing everywhere and there were parades of pickups through the city,” said Mohammed, another of Milad’s cousins.

“They began to loot houses and abduct people, and banned women from leaving the house and forced the girls to marry their soldiers.”

Residents passing through checkpoints originally set up in and around the city by Ansar al-Sharia for the purpose of checking documents now faced the threat of kidnapping and extortion by IS’s balaclava-clad foot soldiers.

On his mobile phone, Mohammed showed MEE an image of a hooded body hanging from metal bars which he said showed the crucifixion of his cousin on 16 January.

“Milad was a good man and he wanted to chase them out,” he said.

“He had fought in the revolution and was a member of the Sirte Security Council. He was one of first to report that among IS ranks there were also former men of Gaddafi, so they punished him. They killed him on his wedding anniversary.”

In Misrata, the number of people displaced from the east of the country is growing every day, with about 5,000 families already seeking refuge in the city.

At a warehouse set up by the local authorities to distribute food and medicine, people queue from early morning until late afternoon for dates and milk.

One man, who gave his name only as Hafed, told MEE he was too afraid to talk about what was happening in Sirte.

"There are many families left there who cannot run away, including some of my relatives and if IS sees my face or reads my surname they could take revenge on them,” he said.

Hafed said that years of instability and violence had made IS more attractive to some young men.

“The pain of the situation is not for men like me who have already lived some of our lives. The real pain is for the men born in the 1990s, like my son, who are the most fertile ground for the jihadists.”

Near the warehouse, MEE met a young man on crutches who described how he was kidnapped at an IS checkpoint while driving a fuel tanker.

“We were driving along the road from the desert south of Sirte when we were stopped by armed men in balaclavas. We immediately knew they were IS men,” said Saeed, who declined to give his real name.

Saeed and his colleagues were taken to a prison where he said his captors were mostly Sudanese and Nigerians.

“But we were very scared. Every day they came into the cell and there were questions about Islam and if we gave the wrong answers they would hit us. We heard them kill a person in the cell next to ours. I distinctly remember his screams.

“After a month we were freed for a ransom. They released us all and they also returned the bodies of three young soldiers from Misrata killed in Sirte."

Saeed is unsure who paid the ransom, but believes his release may have been secured as part of a deal struck by the military authorities in Misrata to retrieve the soldiers' bodies.

Today in Sirte, smoking is prohibited, women are obliged to be completely veiled and mobile phones are banned. Leaving the house in the evenings is forbidden.

And since the local power station was destroyed, communication with the outside world for those still inside the city has become almost impossible.

“There was no food and now there is no more fuel. Our beloved Sirte has become a ghost town,” said Mohammed.

“But for many it is easier to stay, succumb and be quiet because they have nowhere else to go. Here we are crying for Milad but we are lucky, because we are safe from those murderers.” 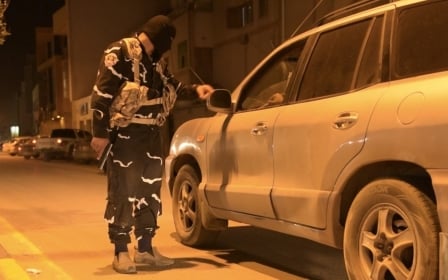