The Palestinian National Theatre was established in 1984 JERUSALEM - The Israeli authorities are poised to close down Jerusalem’s only remaining Palestinian theatre if they fail to pay off $150,000 of debt.

Al Hakawati theatre, also known as the Palestinian National Theatre, was established in 1984 as a non-profit organisation.

The theatre’s director, Amer Khalil, received a phone call Thursday, warning him that the theatre would be closed after 48 hours if he failed to pay the money owed to the Israeli authorities. The deadline was subsequently postponed until Monday morning, Khalil told Middle East Eye.

Khalil explained that Al Hakawati has been in a financial crisis for the past five years due to funding constraints. East Jerusalem’s Palestinian residents pay taxes to the city’s municipality, but they do not receive adequate services or funding in return.

Imad Mitwalli, artistic director of a moving theatre group in Palestine, has been involved with Al Hakawati theatre since it opened. He told MEE that Al Hakawati is stuck in limbo when it comes to funding as they do not receive money from the Israeli authorities in Jerusalem, yet they are also prevented from receiving funding from the Palestinian Authority (PA).

Mitwali told MEE that in 2013, the Israeli authorities cancelled a children’s puppet festival due to be held at Al Hakawati. The festival was sponsored by the PA, which did not seek permission from Israel to hold the festival, the Guardian reported.

Israeli authorities claimed this move violated the 1994 Oslo Accords, which state that the PA must receive permission to host events within Israel. East Jerusalem has been occupied by Israel since 1967, and the district does not fall under PA jurisdiction. The Israeli government views Jerusalem as the undivided capital of Israel.

“According to the Oslo Agreements, Palestinian organisations in East Jerusalem cannot have any relations or any financial support from the PA. Financially, it’s a very difficult situation for us,” Khalil told MEE.

Jerusalem was selected to be “the Capital of Arab Culture” in 2009, after Damascus held the title in 2008, but, according to the International Middle East Media Centre, Israeli police prevented Al Hakawati from hosting a festival in celebration.

Khalil told MEE “it’s getting more and more difficult” for Palestinian cultural institutions in Jerusalem. He explained that in the 1980s and 1990s, Al Hakawati’s audience would travel from all of East Jerusalem’s neighbourhoods, as well as from Bethlehem and Ramallah, and other cities within the West Bank.

Since then, their audience numbers have dwindled, and access to the theatre has been restricted once again in recent months by the “difficult, critical political situation in Jerusalem,” Khalil told MEE.

On Saturday morning, Imad Mitwalli sat in the workshop at Al Hakawati, making phone calls to local Jerusalem businesspeople, encouraging them to save the theatre from closure.

He and Khalil both told MEE that even if the theatre remains open past tomorrow, Al Hakawati’s need for funds for future running costs won’t be fulfilled. “They may solve the problem today, but next month we will have another problem,” Mitwalli told MEE. 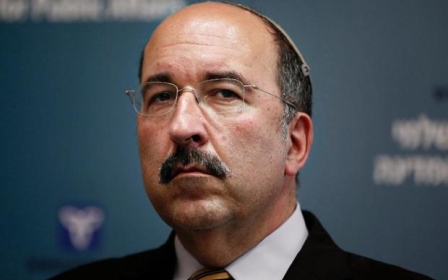