Spanish rescue group Proactiva Open Arms said the Libyan coastguard saved migrants on a dinghy but left a women and a little boy to die. (AFP)
Par
MEE and agencies

The European Union's migrant strategy has suffered a major setback with Italy refusing to freely accept people rescued at sea and Libya spurning a proposal for asylum processing centres.

The salvoes follow a fractious EU summit in June which agreed to set up "disembarkation platforms" outside the bloc to process migrants after Italy's new populist government said it was closing its ports.

"Italy does not want to be the only country where migrants saved at sea by its own naval units disembark," Foreign Minister Enzo Moavero Milanesi said in a letter to EU foreign policy chief Federica Mogherini.

The Italian position and its implications will be discussed at a meeting later Friday by member states in Brussels, EU sources said.

Libyan Prime Minister Fayez al-Sarraj meanwhile rejected the EU proposal for asylum processing centres in his country, saying: "We are strictly against Europe officially placing illegal migrants who are no longer wanted in the EU in our country."

"We also won't agree on any deals with EU money about taking in more illegal migrants," the Libyan premier told Germany's Bild newspaper in an interview published on Friday.

Sarraj said European leaders should instead put pressure on migrants' origin countries to stop them embarking on their journey in the first place.

The proposed centres were to operate in cooperation with the UN refugee agency and the International Organisation for Migration (OIM).

Egypt, Morocco and Tunisia were also approached by the EU but have already refused to host such centres, where authorities would distinguish between economic migrants and asylum seekers admissible into the EU.

Albania has also ruled itself out with Prime Minister Edi Rama saying that such centres mean "dumping desperate people somewhere like toxic waste that no one wants".

Most of the migrants are from the Middle East, Africa and South Asia.

Italian Prime Minister Giuseppe Conte has written to European Commission President Jean-Claude Juncker saying his country would no longer take in migrants plucked from the Mediterranean until other member states accepted some of them.

Over the last decade, the Italian coastguard has coordinated the rescue of hundreds of thousands of migrants off the coast of Libya, in many cases pulling them from the water themselves in treacherous conditions.

But as of June, they have been ordered to transfer calls for help and reports of boats in distress to the Libyan capital Tripoli.

Juncker wrote back to Conte saying "these ad hoc solutions will not be feasible in the long term," according to a copy of a letter seen by the AFP news agency.

But Juncker agreed to try and identify nations that would shelter rescued migrants until a definitive framework was agreed upon as to who would take charge of them.

June was the deadliest month in the Mediterranean in recent years with the IOM reporting some 564 deaths or disappearances, despite the fact that overall departures have dropped sharply since the summer of 2017.

Meanwhile, Sarraj also rejected claims from Spanish rescue group Proactiva Open Arms that the Libyan coastguard saved other migrants on board a dinghy but not two women and a little boy.

The child and one of the women were found dead when Spanish rescuers arrived, but the other woman was saved.

"These are outrageous accusations, and they are not true. Our coastguards have already clarified this," said Sarraj, who heads the UN-backed unity government in Tripoli.

"Every day, we save hundreds of people on the coast of Libya. Our ships are active non-stop," he said, stressing that Tripoli needs more technical and financial aid to improve its rescue missions.

Under a controversial deal with the EU, Libyan coastguards intercept migrants trying to cross the Mediterranean.

But the UN has slammed the policy as "inhuman", noting that the migrants are simply brought back to "horrific" detention centres in Libya.

The European Court of Human Rights also opposes the repatriation of migrants to Libya on the ground that they could face rights abuse.

The European Commission, the EU's executive arm, will discuss in the coming weeks proposals for controlled holding centres for migrants in member states and cooperation in rescue efforts, spokeswoman Natasha Bertaud said earlier this week. 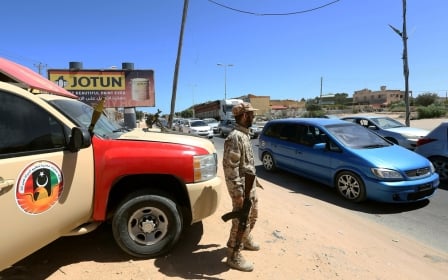 Migration
More than 60 missing after shipwreck near Libya's coast Refugees
From the Jungle to the West End: ‘It’s not about refugees, it’s about humans’