Battle of Mosul: Countless dead and no help as US air war exacts heavy toll

Hundreds of civilians are believed dead in US coalition raids. Iraqis report use of overwhelming firepower, and scores of bodies lying under rubble 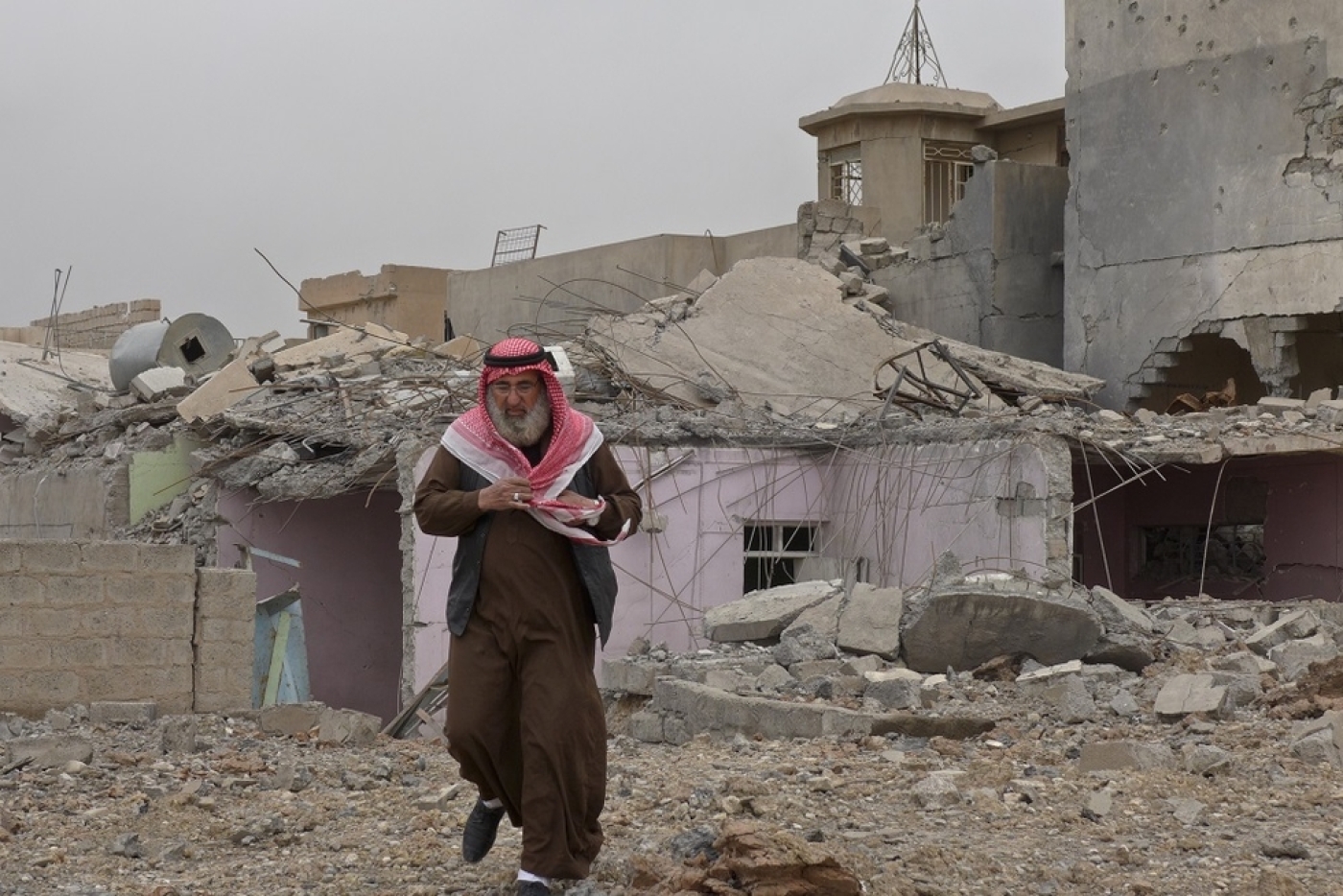 MOSUL, Iraq - Abu Ahmed picks his way across the rubble-strewn pavement, careful to check for IEDs left by fleeing Islamic State fighters, and gestures to lilac-coloured walls and a roof sagging under the weight of fallen masonry. This is all that remains of his family home.

The area may indeed be littered with booby traps left by IS, but the bombs that destroyed Abu Ahmed's home came from above - and IS does not operate an air force.

This block was hit by 14 air strikes targeting two Daesh fighters. Now we have nothing left

"This block was hit by 14 air strikes targeting two Daesh fighters," he says, as he scoops up a scrap of paper dropped by the Iraqi air force. "They threw papers from planes telling us not to leave our homes so we stayed, but look what happened."

"Now we have nothing left. We managed to clear out one room and that's now where we are living," he says, adding he, his wife and four children were lucky to be in a neighbouring house when the bombs fell.

And they are alive at least - unlike hundreds of other civilians reported by the Airwars monitoring group to have been killed in March by US-led coalition air strikes in western Mosul.

Other residents have similar stories of overwhelming firepower used against sometimes solitary IS fighters, which caused huge amounts of "collateral damage".

In a graveyard on the other side of Mosul's al-Mamoun district, a team of men and boys dig graves for civilians killed not only by air strikes, but by mortar fire and IEDs left by IS.

"Countless civilians have been killed by these air strikes and many, many bodies are still lying underneath their homes," says Ismail Dabus, 50, shaking his head.

"The aircraft see one Daesh guy on the roof and drops a bomb to get him but, in the basement below, a family of 10 people are sheltering and they get killed too."

He said several families often group together in homes that have large basements, so the destruction of even a single house could result in multiple civilian casualties.

"We keep asking why these air strikes are killing so many civilians," says Dabus.

Countless civilians have been killed by air strikes ... many bodies are still lying underneath their homes

"We know they are necessary, but they have to check to see whether there are civilians inside before they carry out these attacks."

His cousin Falah claims some of these air strikes fail to actually kill any IS militants.

"Daesh knocked holes through the walls of the houses so they could move around unseen from the sky," he says.

"The US aircraft sees a Daesh fighter and then drops a bomb on that house but half the time the Daesh fighter has already moved to another house."

Collateral damage - the awful war euphemism that smoothes over civilian deaths - is severe in the latest phase of the Mosul conflict.

The situation for civilian casualties has become so desperate that Mosul Eye, a locally-based Twitter and Facebook account, has started making pleas via social media for help in rescuing families trapped under the rubble of crushed buildings.

On Tuesday the accounts gave the coordinates for a house that had collapsed after being hit by a rocket, trapping nine civilians underneath for the preceding 24 hours, begging for help. Family members had called Iraq's Golden Division, but nobody had come, the post said.

Even with coordinates, reaching specific buildings and shifting chunks of masonry is almost impossible for civilians.

There are no vehicles left to carry out rescue operations, after they were all commandeered by retreating IS fighters, who used them to block streets and then set them ablaze to provide cover from aerial surveillance.

From the graveyard, Falah points to a crumpled building on the distant horizon behind which grey smoke rises from another air strike. "There are 38 people still under that house. I know some of them because we used to be neighbours," he says.

"We need to get the bodies out and give them a decent burial but the buildings are completely flat and we can't get to them. We need heavy machinery and cranes to move the rubble."

While the men dig the graves, helicopters wheel overhead, firing more missiles down upon Mosul districts still occupied by IS. Even though they hit several kilometres away, the explosions reverberate through the ground.

"We don't know what to do because we can't get them out, but we can't just leave them under there," he says, tears welling in his eyes as he looks back towards the two blanket-wrapped corpses on the ground, awaiting their burial. One is his 18-year old nephew Saif.

Southwestern Mosul districts deeper inside the city - where recently-liberated areas are apparently littered with unexploded ordinance and remain under threat from incoming IS mortars and sniper fire - remain largely unreachable at present.

But locals say there, the level of destruction is much worse.

"The Wadi Haja district is like Kobane. It is completely destroyed," said Farhan Abdullah, brushing dirt from his hands.

"It is still difficult to get inside because there are IEDs and unexploded missiles everywhere, but I saw the long main street where the road was full of craters, some seven metres wide, and all the homes have been completely flattened ."

Formerly delighted by the prospect of liberation from IS, the destruction brought upon Mamoun and surrounding districts has led locals to start questioning the input of the US coalition, which they deem largely responsible for the air strikes.

"They are definitely coalition air strikes. Most of them are done by unmarked aircraft without any Iraqi flags, and only America has Apache helicopters here, not the Iraqi airforce," Falah says.

He adds, with a disgusted snort: "Anyway, the Iraqi military can't do anything here without the permission of the US."

Abu Ahmed insists the air strikes in his area were carried out by coalition aircraft, and says he has observed them on operations for weeks.

But he says can't understand why the coalition did not bomb IS targets earlier in the conflict, or even before it started.

"The US sees everything. They have had drones flying here for weeks, watching Daesh fighters walking around with guns, and building sand berms with diggers, and they just took their photos and did nothing," he says.

"Actually, US drones have been flying here for over a year, watching Daesh, when they were digging tunnels in the desert.

"Why didn't they bomb them there, where there were no civilians?"

As heavy mortar fire shakes the ground, he turns back towards the ruins of his house.

"The truth is that the US watched them walking in the streets and did nothing, then waited for them to go inside our homes to attack them," he says.

"Is the US blind that it can't see Daesh in the open streets but can see them when they go inside buildings?"

And with bitterness, he adds: "After watching what happened here, I really believe now that the US and Daesh are a team, working together to destroy our country." 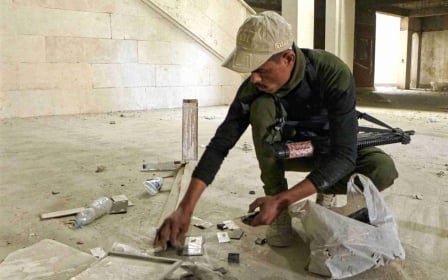 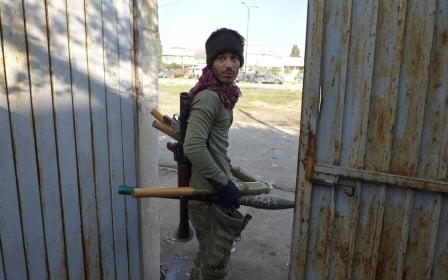