Transitional justice is the only way forward for a lasting peace after the inevitable outcome, activists and lawyers say 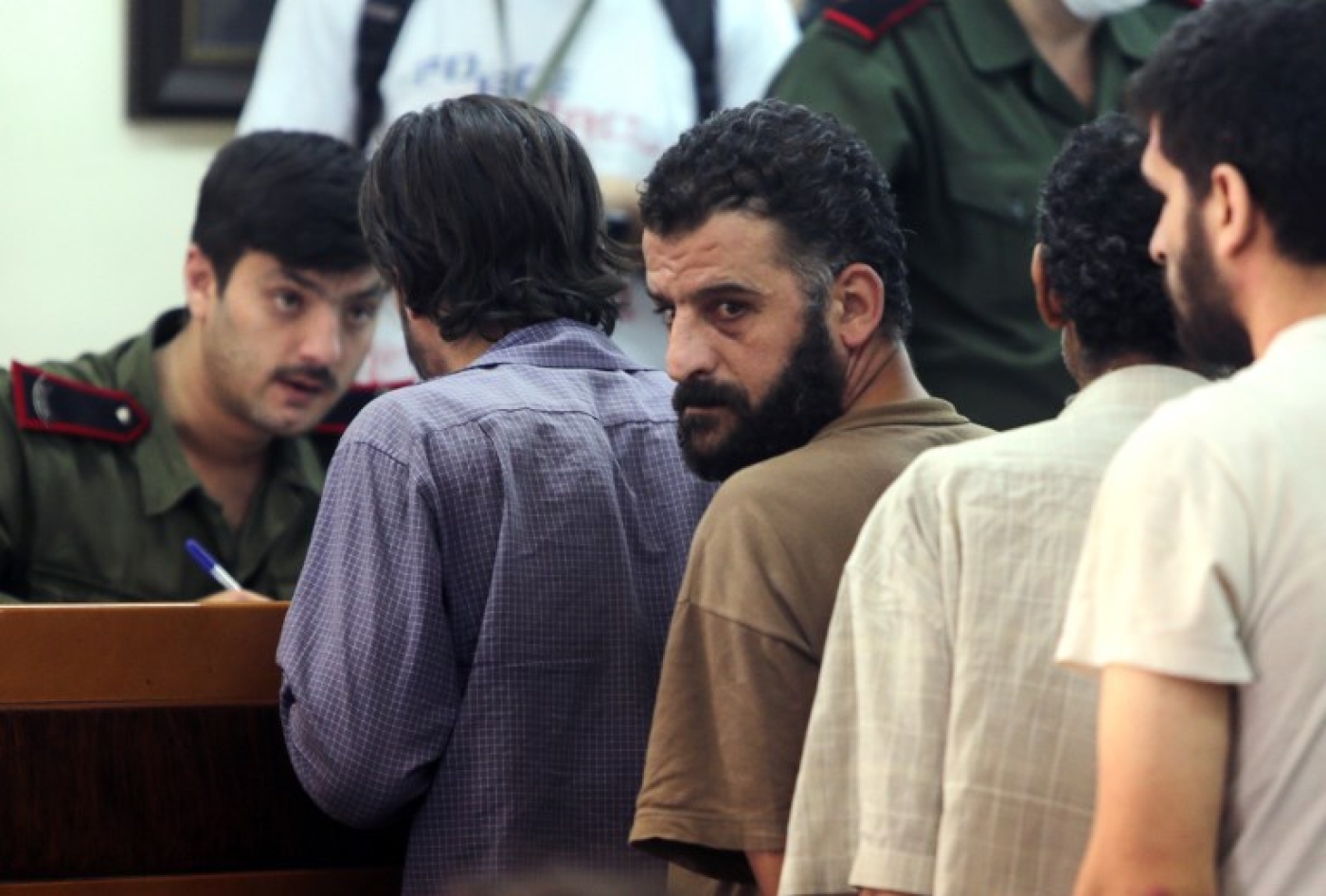 Syrian prisoners queue-up to sign their release papers at Damascus central police station in 2012. More than 100,000 Syrians have been arrested or disappeared in the conflict (AFP)
Par
Olivia Alabaster

It is a narrative that regional and world powers have begun to accept: the Syrian war is over, and Bashar al-Assad has won. After six years of conflict, and half a million dead, what little military will remains – on either side - is focused on defeating the remnants of Islamic State.

But a counter-narrative is being pushed by those opposition members in far flung capitals: regardless of the military outcome, transitional justice must be served, and democracy will eventually prevail.

“It’s not about who wins. It’s about how we release the detainees, and ending torture, and finding out where the missing people are,” said Mazen Darwish, a Syrian civil rights activist who himself was released from prison in 2015.

It’s not about who wins. It’s about how we release the detainees, and ending torture, and finding out where the missing people are

More than 106,000 people have been arrested or disappeared in Syria since the war broke out, according to Human Rights Watch.

“I’m not happy, whoever wins militarily,” he said, speaking to MEE from Brussels.

But, he added: “The most important thing is about the ordinary individual civilians who have suffered. As civil society, we need to guarantee that sustainable peace is achieved.”

The need for peace

The lawyer and president of the Syrian Centre for Media and Freedom of Expression was in Belgium to stress the urgent need for accountability in the conflict, but before that would be possible, he said, the violence needed to end.

“Firstly, the most important thing is the need for peace,” he said.

“I don’t believe any transitional justice could take place during the conflict, and nor can any political transition take place” while the violence is ongoing.

While a de-escalation deal, brokered by Russia and Turkey in Kazakhstan in July, had seen a reduction in overall violence, September became the deadliest month in the conflict this year, with at least 3,000 dead, including more than 900 civilians.

“The victims have to be given a chance to get accountability and see a process of justice,” Darwish said.

Last month, for the first time, a Syrian soldier was sentenced in Stockholm for crimes committed in the war, a global first.

A scattering of convictions across Europe have already seen rebel fighters and IS members sentenced for their part in the conflict.

Nerma Jelacic, a deputy director at Commission for International Justice and Accountability, welcomed the Stockholm development, but said European intelligence agencies should be looking for higher-ranking officials.

“It was quite welcome as it was the first time that someone from the regime has been tried for his crimes,” she told MEE.

“But our hope is that not only the low-level or direct perpetrators be brought to justice, but those who have command responsibility – those of the higher rank, that’s what we need to see.

“We might not see the president standing trial,” she said, “but it might be possible to find some high-ranking officials residing in Europe,” and currently living under the radar.

Darwish said the time is ripe for a renewed focus on the crimes of the war, from every side.

“This is a chance to keep the focus and keep these kinds of crimes under the spotlight… the international community and even Staffan de Mistura want to hide and forget everything that happened. It is not realistic.”

Last month de Mistura, the UN’s Syria envoy, said that the opposition should accept that they had lost the war.

“Will the opposition be able to be unified and realistic enough to realise they did not win the war?” he asked, adding that “For the opposition, the message is very clear: if they were planning to win the war, facts are proving that is not the case. So now it’s time to win the peace.”

Darwish gave a damning indictment of the various peace talks on Syria over the years – parallel but often conflicting tracks, each sponsored by different parties, have run in Geneva, Cairo and Astana.

“Everything that has happened in Geneva and elsewhere up until now has just given the killers time to kill civilians,” he said, adding that UN resolutions condemning the violence also achieved nothing.

“If the international sides are serious in finding a solution to the conflict in Syria, they would start with criminal cases,” Darwish said.

If the international sides are serious in finding a solution to the conflict in Syria, they would start with criminal cases

As Syria does not recognise the International Criminal Court, war crimes can only be investigated if Damascus decides voluntarily to accept the court’s jurisdiction, or if the UN Security Council asks the ICC’s prosecutor to open an investigation – a move blocked by Russia and China in 2014.

But such cases in Europe fall under the definition of “universal jurisdiction”, whereby grave international crimes can be prosecuted by any country, even if the crimes were committed elsewhere.

These cases, are, according to HRW, “an increasingly important part of international efforts to hold perpetrators of atrocities accountable, provide justice to victims who have nowhere else to turn, deter future crimes, and help ensure that countries do not become safe havens for human rights abusers.”

Obstacles remain, though, and a case pursued in Spain earlier this year investigating members of the Syrian security services for murder collapsed after a panel within the High Court ruled that it did not have jurisdiction over the case, and that a Spanish connection was necessary. The legal team pursuing the case say they are appealing the decision.

Husam Alkatlaby, in Brussels with Darwish, has spent years preparing for just this moment, and as director of the Violations Documentations Centre (VDC), has been overseeing the collation of such evidence.

And what the evidence shows, he said, must have a direct bearing on what any future government in Syria looks like.

“The government is responsible for the majority of the crimes, so from our point of view, there should be no place for them in the future,” Alkatlaby said, adding that this should also rule out “any other parties who committed crimes.”

Last December, the UN General Assembly established an International, Impartial and Independent Mechanism (IIIM) on international crimes committed in the Syrian Arab Republic, tasked with collecting the necessary evidence for any future trials.

And while this might not take the form of an ICC investigation, Jelacic, from the Commission for International Justice and Accountability, said that alternative courts could receive UN Security Council approval to try cases, such as an international court, in the Rwandan example, or a hybrid court comprising Syrian and international experts – the Cambodian example.

“A lot of IIIM’s work is based on data we have collected from 2012 until now,” Alkatlaby said, alongside evidence gathered from other civil society organisations. “And they are the most important partner here.”

It was time for the EU, and the global community, to stop seeing Syrian civil society groups as merely aid recipients, but as genuine partners, both Darwish and Alkatlaby said.

“We have asked the EU to put pressure on de Mistura to take civil society groups into consideration,” the VDC director said.

The government is responsible for the majority of the crimes, so from our point of view, there should be no place for them in the future

Currently, he added, “We think that de Mistura is far away from recognising the need for accountability and justice and looking at the families of those harmed in his policies.”

Despite the current prevailing narrative on Syria, and his own years in government detention, Darwish said he remained positive about what lies ahead for his country, and that there was good news to come soon.

“I’m still optimistic about the future, and moving towards democracy in the Middle East.”

“Even with all this suffering and crisis, in the end we will establish a new democratic country built on principles of dignity and human rights and freedom.”