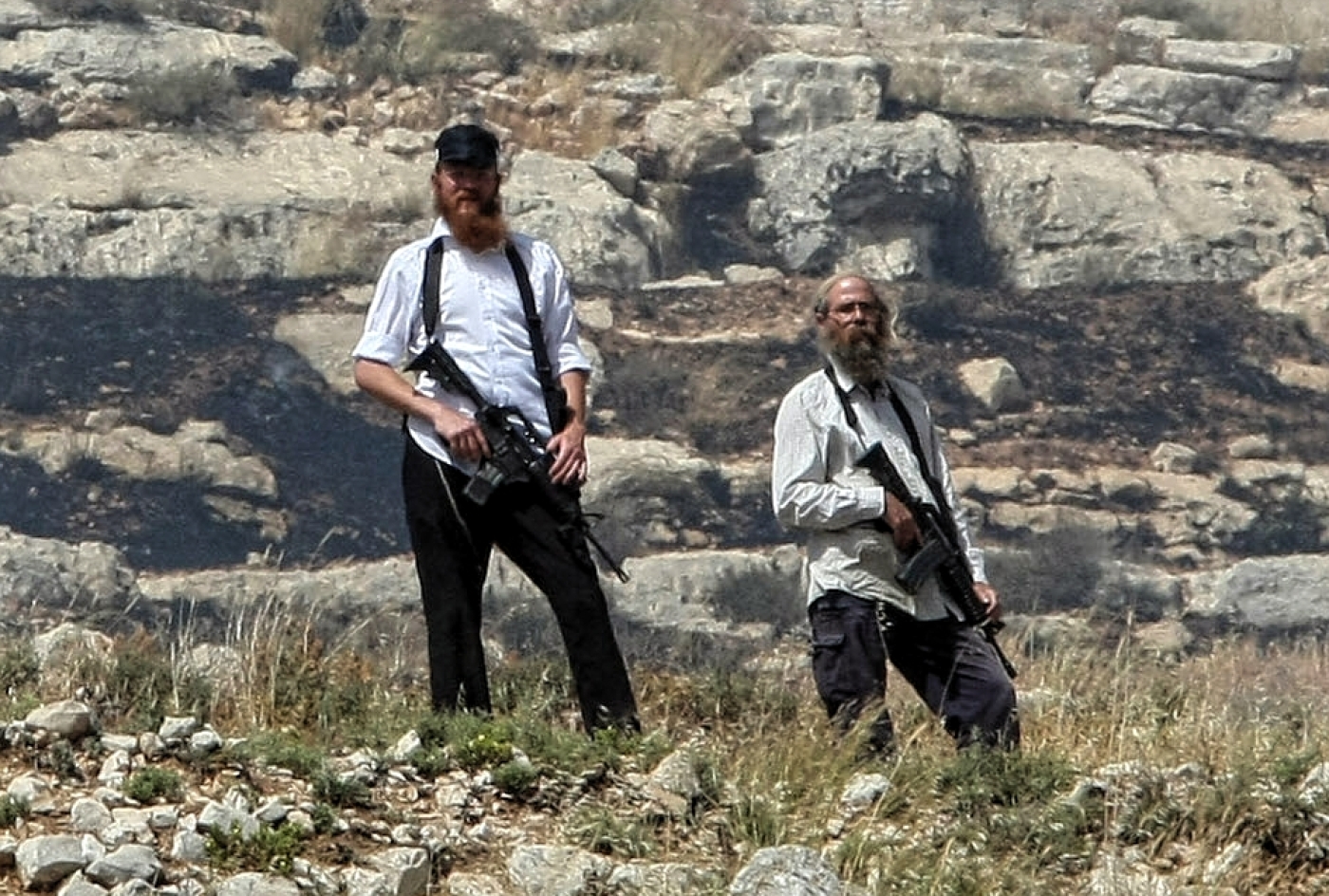 URIF, Occupied West Bank - In the mountainous northern West Bank, a ring of notoriously violent Israeli settlements sits like watchtowers on the hilltops surrounding the Palestinian city of Nablus and a dozen smaller villages.

The most infamous of those settlements, all of which have been built in contravention of international law, is Yitzhar and its adjoining outposts, home to more than 200 militant Israelis.

For the thousands of Palestinians living in the six villages in the valley below Yitzhar, attacks from settlers are a weekly occurrence. In recent weeks, settlers have launched an onslaught on the villages, subjecting Palestinians to near-daily attacks.

According to activists and locals from the villages who spoke to Middle East Eye, the attacks and the events that ensue in the aftermath almost always unfold in a routine manner: settlers raid the outskirts of a village, local youth attempt to push them back into the hilltops, and Israeli soldiers arrive to protect the settlers and suppress the Palestinians with tear gas, sound bombs, and live ammunition.

This well-documented pattern culminated on Saturday 10 March, when 19-year-old Omeir Shahada was killed by Israeli soldiers during one such settler raid in the village of Urif, where a cluster of Palestinian homes sit a mere 200 meters away from Yitzhar.

‘Always a risk of death’

Just before sunset, a group of around 30 settlers descended into the outskirts of Urif, and began attacking residents and their homes with rocks, according to several witnesses.

Shahada and his friends, who, like him, work in construction in the village, got word of the attacks and took to the top of the hill with several other youths from the village.

Just as they usually do, confrontations broke out between the settlers and the youth trying to push them back, and within minutes armed Israeli forces arrived in the area.

Ahmad Sabah, 21, one of Shahada’s best friends, was there with him that day.

“When the soldiers came, they provided cover for the settlers, as they usually do,” he told MEE as he walked in the area where Shahada was killed, adding that the soldiers fired intensive tear gas rounds and sound bombs at the youth from the outset.

“It wasn’t long before they started firing live ammunition at us. Many of the guys saw the lasers from the snipers being pointed at them during the confrontations.”

The Israeli army has admitted using live fire, and says the incident is being investigated.

During the commotion of trying to push back the settlers and dodging the soldiers’ bullets, Shahada was shot twice in the torso - once on either side - while another 16-year-old boy was shot in the leg, according to his family and friends.

Of course I wonder if the soldiers hadn’t stopped us at the checkpoint, maybe those extra 15 minutes could have saved his life

Sabah and another friend evacuated Shahada from the area and rushed out of the village in a private car to the nearest hospital - 15 kilometres away in Nablus city.

“When we arrived to the Huwwara military checkpoint, the soldiers stopped our car and refused to let us through. We fought with them for 15 minutes before they let us go,” Sabah told MEE.

But by the time they reached the hospital, it was too late. Shahada had died from his wounds, and Sabah lost his best friend.

“I was devastated, I still am,” he said. “Of course I wonder if the soldiers hadn’t stopped us at the checkpoint, maybe those extra 15 minutes could have saved his life.”

Shaking his head with disbelief, a meek smile spreads across Sabah’s face.

“You know as we were heading up into the mountain, Omeir joked that if he was to become a martyr today, we would need to find someone else to work with us.”

“He knew, we all knew, there is always a risk of death when confronting the settlers. How could we know that he would be the one to die that day?”

Back at the local village council where Shahada’s family was receiving mourners for the third day in a row, Sabah sat down next to his deceased friend’s older brother, Ibrahim, and father, Omar.

For the family, the settlers are just as responsible for the death of Shahada as the soldiers who shot him.

“The soldiers and settlers are the same,” Omar said, “there is no difference between them.”

The soldiers and settlers are the same... there is no difference between them

When asked if they would be seeking justice for Omeir’s killing, Ibrahim let out a faint laugh, as Omar answered indignantly “Why? What’s the point? The same soldiers who killed my son will be the ones to decide his case in court,” he said, referring to Israel’s military courts which rights groups have labelled “kangaroo courts.”

Israeli human rights group Yesh Din has reported that 75 percent of investigations by Israel into ideologically motivated attacks against Palestinians are closed “due to police failures”.

“The soldiers and settlers have killed so many before Omeir, and nothing bad has happened to them. My son was not their first victim, and he won’t be the last,” his father said.

When recounting decades-worth of stories of Israeli settler attacks, several of which have resulted in deaths, every single Palestinian, including Shahada’s family, mentioned the Dawabsheh family.

In 2015, young Israeli settlers entered the Nablus-area village of Duma about 30 km southeast of Urif, and firebombed the home of the Dawabsheh family.

Eight-month-old Ali Dawabsheh was burned alive in the fire, while both his parents later died from their injuries. They were survived by four-year-old Ahmad, who suffered from critical burns all over his body.

“There is this constant fear that people have every time the settlers raid our villages, that maybe they will suffer the same fate of the Dawabshehs,” Hakmeh Hassan, head of a local women's council in Asira Qibliya village, told MEE.

Sitting in her home, which lies where Madama village ends and Asira Qibliya begins, a boisterous and outspoken Hassan spoke to MEE about years of settler attacks on the village, including the burning and cutting down of olive trees, the killing of livestock, and the constant destruction of property.

“Two boys, brothers, from Asira were killed in the span of a few years in the early 2000s,” Hakmeh said, adding that she estimates at least 10 Palestinians have been killed directly by settlers from Yitzhar, or by soldiers as a result of attacks from Yitzhar settlers, since the settlement was established in 1984.

“Last month, settlers came in the middle of the night and started attacking a home with young children inside. They broke all the windows and were going to set the house on fire, but thank God, people from the village got there in time to drive the settlers out before they burned the house down.”

Though MEE could not verify her claim, Hassan suspected the attackers belonged to the religious-nationalist Hilltop Youth organization - which she called a terrorist organisation - whose members are responsible for dozens of hate crimes, or “price-tag attacks” against Palestinians and their property.

For years, Yitzhar has closely been linked with the "price tag" movement, with many crediting its foundations to the now-shuttered Od Yosef Chai yeshiva school.

Located in Yitzhar, the religious school used to be run by Rabbi Yitzhak Ginzburg, who was charged in 2003 with incitement to racism for his book Tipul Shoresh, which called for Palestinians to be expelled from Israel and the Palestinian territory. The charges were dropped when he later issued a "clarification letter".

There is this constant fear that people have every time the settlers raid our villages, that maybe they will suffer the same fate of the Dawabshehs

According to reports, it was in this yeshiva where rabbis would encourage students to attack Palestinians and their property, as well as Israeli security forces.

It is unclear why they also attack Israeli security forces, but some settlers seem to believe the authorities are unfairly "protecting" local Palestinians.

In 2010, another of Yitzhar’s rabbis, Yitzhak Shapira, was arrested for allegedly firebombing a mosque, and released hours into house arrest.

Shapira was the author of a book called The King’s Torah, which said it was permissible under Jewish law for a Jew to kill a non-Jewish civilian. He also advocated the expulsion or genocide of male Palestinians over the age of 13.

“These settler youth are radicalised in Yitzhar where they are taught to hate Palestinians and attack us,” she said, adding that on many occasions, the settlers will make a family event out of a raid on a Palestinian village, with parents bringing their children along for the attack.

Earlier this month, Yesh Din reported that settlers have, in recent weeks, stepped up their attacks against Palestinians in the area around Yitzhar.

Between February and March alone, settlers have attacked homes and civilians in Asira Qibliya, and Huwwara with rocks, beaten farmers and slaughtered sheep in the village of Einabus, and reportedly attempted to kidnap two Palestinian children in the Madama village.

And last week, settlers sparked clashes in the village of Burin that culminated in Israeli soldiers throwing a sound grenade at a Palestinian couple attempting to evacuate the area with their five-month-old baby, according to the NGO.

Hassan does not anticipate that the near-daily attacks will die down any time soon, blaming both the Israeli government as well as the Palestinian Authority (PA) for the ongoing violence.

“Every day the settlers become more and more aggressive,” she said, “and unfortunately, the PA is useless, they can’t do anything,” highlighting the fact that the PA has no jurisdiction over the near 600,000 settlers living in the occupied territory.

“For years they have made our lives in these six villages a nightmare, and they will continue to do so for as long as they are permitted to by both governments.”