UAE in three-day mourning after 45 soldiers killed in Yemen 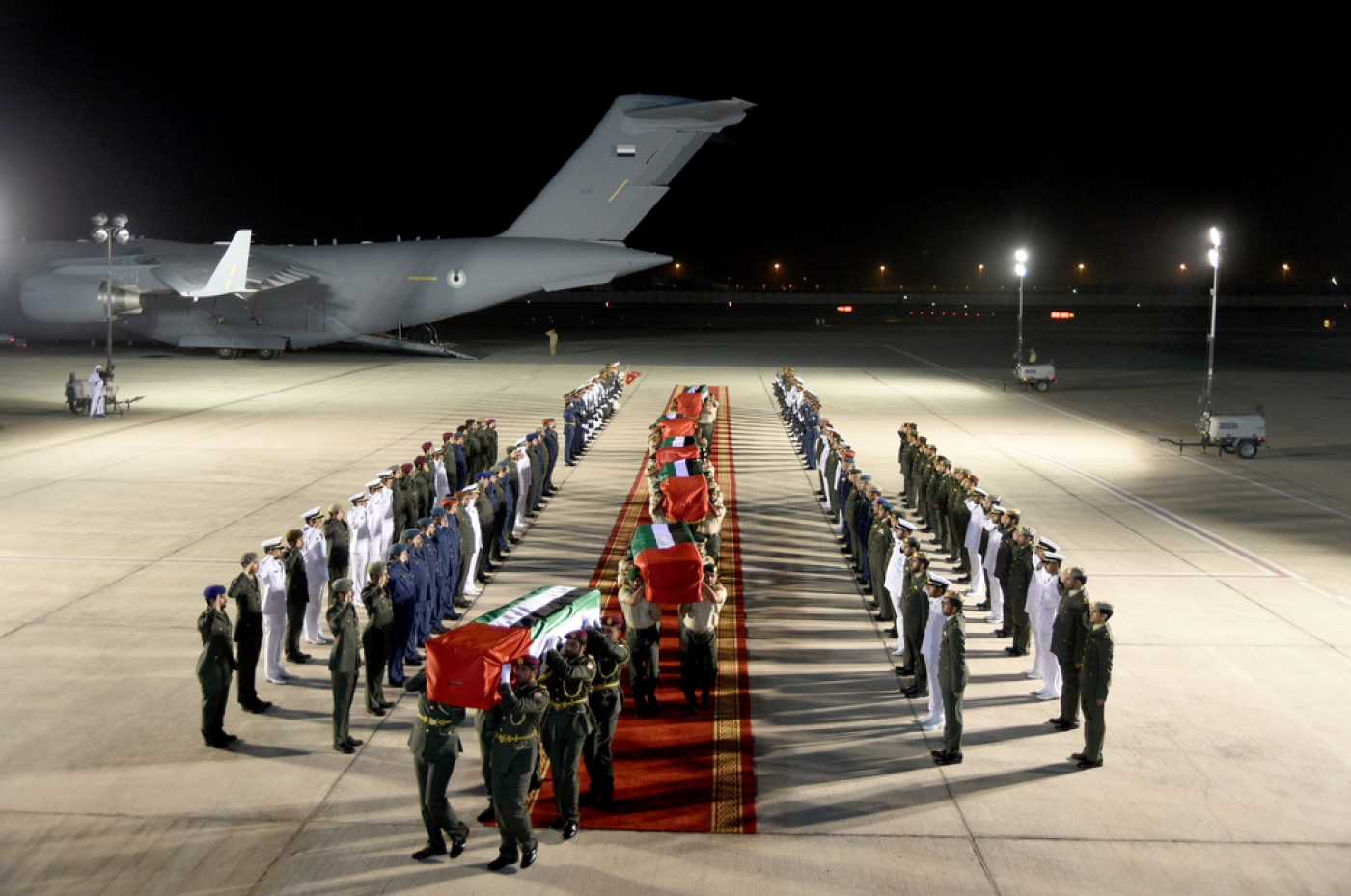 The UAE declared three days of national mourning after 45 of its soldiers were killed in Yemen on Friday, the deadliest day yet for the Saudi-led coalition against the Houthi militia and forces loyal to former President Ali Abdullah Saleh.

It was the UAE's highest casualty toll of the six-month-old air war, which Yemen's government blamed on an "accidental explosion" at a military base in the eastern province of Marib.

But the Houthi militia claimed their fighters had fired a rocket that caused the blast, and the UAE's official press agency reported the military responded with a series of night raids on Marib, Sanaa, northern Houthi stronghold Saada and the central city of Ibb.

The coalition was launched in March to stop Houthi militiamen from taking full control of Yemen and to restore the rule of President Abedrabbo Mansour Hadi, exiled in Riyadh.

"The battle to reclaim and rebuild Yemen will continue and the UAE will be part of the action. Retribution will be swift, it will be hard-hitting and sweeping," wrote the editorial of the Emirati-based Khaleej times on Saturday.

"The terrorists will have to pay for this wave of violence unleashed by them," the paper opined, adding, "Iran cannot escape blame for creating the Houthi militia in the first place. It has provided moral support and armed them to heap more burden on the long-suffering Yemenis, who deserve peace."

Fellow member Bahrain meanwhile said five of its soldiers were killed in southern Saudi Arabia where they had been posted to help defend the border with war-wracked Yemen, without giving a precise location.

However, Yemen's exiled presidency said the Bahrainis died in the same blast that killed the Emiratis.

Around 60 people, mainly military personnel, have died in cross-border rebel attacks in the south of the Saudi kingdom since the coalition began air strikes on the Houthis and their allies in March.

The campaign began as the Houthis advanced on the southern port of Aden, after they took control of the capital Sanaa last September.

The Emirati army had previously announced seven deaths in Yemen among its ranks and did not disclose the circumstances of the latest losses in a statement carried by state news agency WAM.

Before the Emirati toll rose, the pro-Hadi army command said a total of 33 Yemeni soldiers and coalition forces were killed and dozens wounded in the blast at Safer, 250 kilometres (150 miles) from Sanaa.

A thick plume of black smoke was still billowing from the base several hours later.

Friday's coalition losses came as Saudi King Salman held talks with US President Barack Obama in Washington at which Yemen figured high on the agenda.

Obama said the two sides "share concerns" about the need to restore a functioning government in Yemen and relieve the urgent humanitarian crisis gripping the country.

More than 4,500 people have been killed in the conflict, including hundreds of children, according to the United Nations, which has warned that the impoverished country is on the brink of famine.

The United States has supported the coalition effort, but repeatedly warned about the impact the fighting has had on civilians.

According to military sources, the coalition sent reinforcements to the Safer base this week, including tanks, armoured vehicles, troop carriers, rocket launchers and Apache helicopters.

The extra hardware and troop reinforcements aim to boost "the counter-offensive launched by loyalist forces and the coalition to advance on Sanaa", one military official in Yemen said.

But the Houthis said their forces had killed "dozens of officers and soldiers" of the coalition when they fired a Tochka ballistic missile at the camp.

The government denied the Houthi account, saying the explosion near an Emirati encampment in Safer was caused by "badly stored munitions".

However, one Yemeni military source told AFP an initial investigation found that the blast was caused by a surface-to-surface missile fired by the rebels.

The Houtji militiamen, who advanced from Sanaa to overrun large chunks of the country, were driven out of Aden in July.

They have since been on the defensive in southern Yemen, losing control of several provinces.

The Arab coalition has also sent in troops, with Saudi media reporting that roughly 1,500 soldiers, most from the UAE, had entered Aden.

The UAE only confirmed last month that its troops were on the ground there.

The blast in Safer came as loyalist forces kept up their drive to claw back territory lost to the Houthis over the past year.

Coalition warplanes later on Friday carried out air strikes on the rebel-held defence ministry complex in Sanaa and also targeted arms depots in the north of the capital, witnesses said.