US forces 'tried and failed' to rescue Foley in secret mission

US special forces attempted to rescue the reporter, slain by Islamic State militants, and other hostages in a secret mission in Syria The US special forces attempted to rescue reporter James Foley and other hostages in a covert mission in Syria earlier this summer, according to officials and reports.

News of the failed mission came as US President Barack Obama demanded Wednesday that the world take action against the "cancer" of militant extremism in Iraq.

On Wednesday, Islamic State militants, which have seized much of eastern Syria and northern Iraq, released a video showing a masked militant beheading Foley, provoking worldwide revulsion and condemnation.

As US jets continued to strike IS targets in Iraq, despite a threat to kill a second American reporter, Obama said: "When people harm Americans anywhere, we do what's necessary to see that justice is done."

Shortly after he spoke, the State Department asked for 300 more US troops to be sent to Iraq to protect US facilities.

US forces had tried but failed to rescue Foley and other US hostages held in Syria by the IS, officials and reports said.

The Pentagon and the White House did not say if the covert mission earlier this summer was to rescue Foley, who was kidnapped in northern Syria in November 2012 and whose murder has provoked revulsion and condemnation.

However US media, citing senior Obama administration officials, said Foley was among those US Special Operations commandos were trying to rescue

"This operation involved air and ground components and was focused on a particular captor network within ISIL (IS)," Pentagon spokesman Rear Admiral John Kirby said in a statement.

'The mission was not successful'

"Unfortunately, the mission was not successful because the hostages were not present at the targeted location."

Obama "authorized action at this time because it was the national security team's assessment that these hostages were in danger with each passing day in ISIL (IS) custody," a White House statement added.

In the execution video, a black-clad man said that Foley, a 40-year-old freelance journalist, was killed to avenge US air strikes against his movement.

The man then paraded a second US reporter, Steven Sotloff, before the camera and said he too would die unless Obama changes course.

In the nearly five-minute video, Foley is seen kneeling on the ground, dressed in an orange outfit that resembles those worn by prisoners held at the US naval base at Guantanamo Bay.

IS had asked for a multi-million dollar ransom for Foley and killed him after Washington refused to deliver, The New York Times reported.

Obama paid tribute to Foley and said the Islamic State must be defeated.

"Jim Foley's life stands in stark contrast to his killers," he said, branding the militants genocidal murderers who target civilians and subject women and children to "torture and rape and slavery."

"Their victims are overwhelmingly Muslim and no faith teaches people to massacre innocents," he said, dismissing the IS claim to represent the aspirations of a global Muslim caliphate.

"No just God would stand for what they did yesterday and what they do every single day," he declared.

"We will be vigilant and we will be relentless... From governments and peoples across the Middle East, there has to be a common effort to extract this cancer so it does not spread."

US intelligence believes the video is genuine, and the British government held a crisis meeting to launch an investigation because Foley's executioner spoke English with a London accent.

"We have not identified the individual responsible, but from what we have seen, it looks increasingly likely that it is a British citizen," Prime Minister David Cameron told reporters. "This is deeply shocking."

Foley's parents, John and Diane, appeared on the lawn of their home in New Hampshire to pay tribute to their son -- the oldest of five adult children -- and call for other hostages to be released.

'Jim wouldn't want us to hate'

"Jim would never want us to hate or be bitter. We cannot do that and we are just so very proud of Jimmy and we are praying for the strength to love like he did," Diane said.

US Central Command said 14 air strikes had been carried out on IS targets in Iraq in the 24 hours since the video was released.

The United Nations and Europe's top powers condemned the killing, and France warned the world faces the "most serious international situation" since 2001, the year of the September 11 attacks.

In a significant shift from its usual policy, Germany said it was ready to send weapons to support Iraqi Kurds against IS.

In June, the group then known as the Islamic State in Iraq and the Levant declared the dawn of a Muslim caliphate and seized control of a swath of eastern Syria and northern Iraq.

This month, Obama reacted by ordering US warplanes to counter threats to US personnel in the Kurdish regional capital Erbil or to civilian refugees from Iraqi religious minority groups.

He has insisted the scope of the strikes would remain limited, but Iraqi officials and observers have argued that only foreign intervention could turn the tide onmilitant expansion in Iraq.

Shiite militias, federal soldiers, Kurdish troops and Sunni Arab tribes have been battling IS for weeks in some areas but have been unable to clinch a decisive victory. 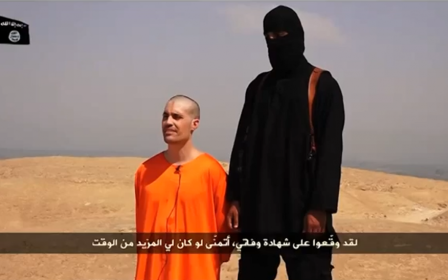 Iraq at War
Iraqi politics: A circle from Iran to Iran
Sami Moubayed