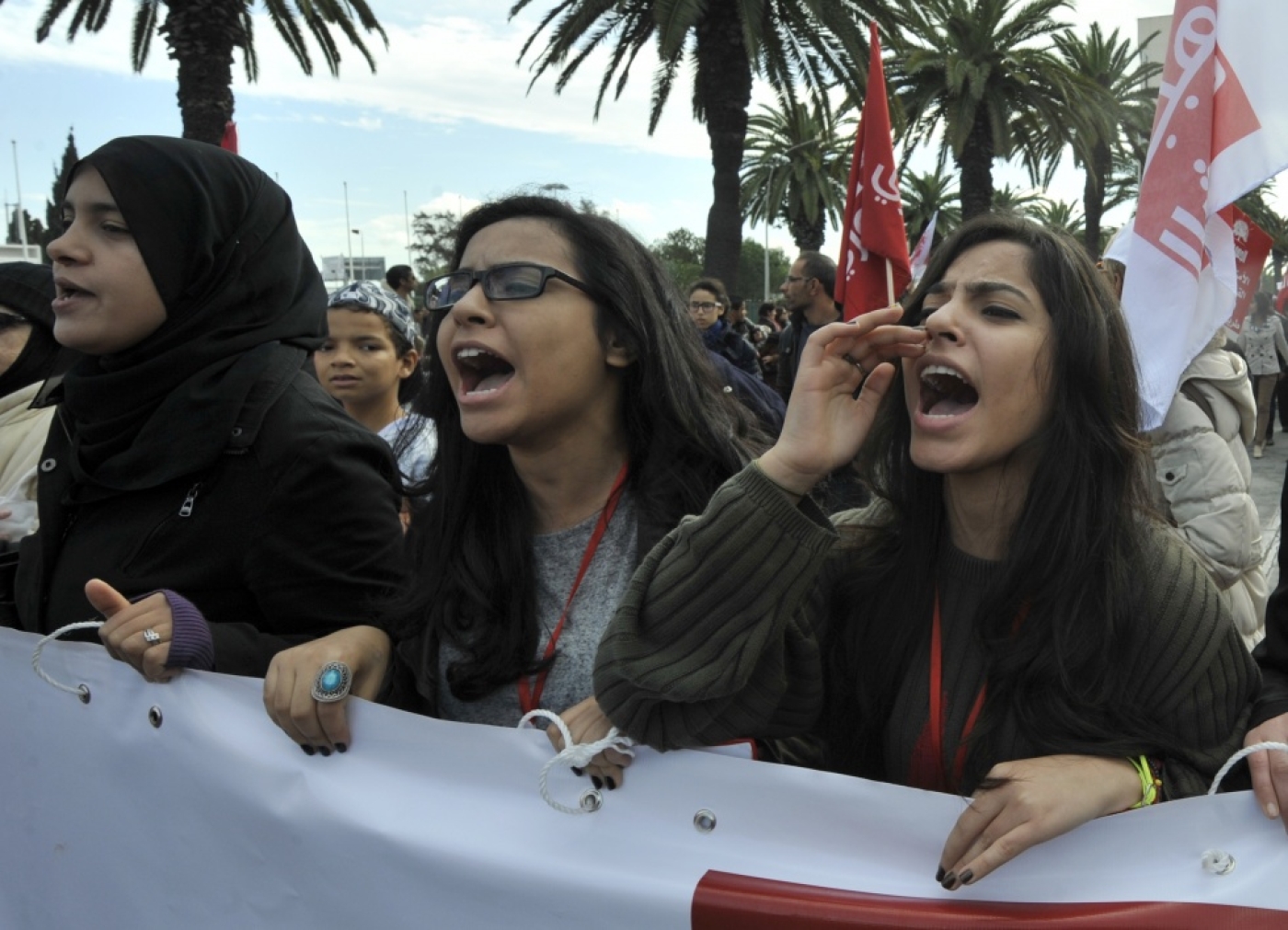 When young Tunisians gathered in the streets and braved bullets more than three years ago, their demands were clear: freedom, dignity and employment. With continued pressure, they pushed out former President Zine El Abidine Ben Ali, secured free and fair elections, and forced an old regime and a largely older generation to heed their calls.

After a series of governments, continued unrest, political assassinations, and fierce ideological battles, Tunisia finally passed a new constitution this January. The country now has a new caretaker government led by Prime Minister Mehdi Jomaa who has made some tentative gestures toward democracy, recently concluded a trip to Washington where he requested international support to invest in Tunisia’s “startup democracy”.

Despite these steps, many Tunisian youths find themselves in the same predicament as three years ago, their futures as bleak or even bleaker than before the uprising.

“The youth who contributed or played a role in the revolution, they helped get certain people to power and now those people are putting these youth in prison and they’re trying to oppress them,” says 28-year-old activist Amal Ayari.

Since the revolution, hundreds of young people have been arrested as simmering discontent has regularly boiled over into protests and sometimes violent clashes with police.

Ayari leads an organisation called “Ikolna Siliana” or “We are all Siliana”, named after a neglected farming town in central of Tunisia, where thousands of youth took to the streets in November 2012.

Less than two years after the initial Tunisian uprising, the young protestors wanted to reiterate the demands of the revolution. Over the span of a couple days, however, special police forces violently quashed the protests by firing into the crowds.

According to Ayari and her younger brother, Marwan, who attended and was injured in the rally, 278 people were hurt. Thirty sustained vision-impairing wounds, two had miscarriages, and two were paralyzed. According to activists, Interior Ministry spokespeople have said in private that some police and commanders have been disciplined for their role in the events, but as of yet no court has granted a hearing to victims. More than that, no officials have made public any information regarding which ministry, let alone which individuals, may be responsible for the response of security forces to protesters.

It is “state terrorism, from the highest point of the pyramid to the policeman who carries out the orders to use the gun,” says Marwan, 26, who wears sun-glasses to cover his disfigured eyes - one eye was blinded after sustaining gunshot injuries while the other is partially blind.

“They marginalize us,“ he says. “They don’t [pay attention to] the young people who made the revolution. We don’t exist for them.”

The eighth article in Tunisia’s new constitution enshrines the rights of Tunisia’s young people and commits the state to “provide the necessary conditions to develop the capacities of youth and realise their potential and strives to give them responsibility and expand their contribution to social, economic, cultural and political development.”

The promise of youth-orientated reforms is seen as an important first step to realising wider change, but the plight of Tunisia’s youth remains. Post-revolutionary economic performance has been underwhelming, while unemployment for under 30s last year hovered at around 30 percent, according to a Brookings Institute report.

“The [eighth article] is not some big thing that we obtained, but it’s important that we passed an article that speaks for the youth in the constitution,” says 27-year-old Foued Thamer, one of the youngest deputies in Tunisia’s National Constituent Assembly.

Like the Ayaris, Thamer, who has in recent weeks unsuccessfully lobbied for a quota for youth candidates in Tunisia’s new electoral law, believes that on many counts the government has failed to address the concerns of young people.

“The distance between the state and youth leaves young people to consider other solutions, like going to Syria [to fight alongside Islamists], to emigrate illegally to Italy, or even to pour gasoline on themselves and burn themselves,” says Thamer.

The Tunisian uprising began when a 26-year-old vegetable vendor, Mohammed Bouazizi, set himself on fire in the neglected interior town of Sidi Bouzid after years of abuse by the state and its police. Since then, over a hundred young men have performed the same desperate act, while nearly 2,000 others have left Tunisia to fight Bashar Assad’s regime in Syria, according to a deputy at the Tunisian Interior Ministry.

Other young people have attempted the dangerous sea passage to Europe on small boats. Some 60,000 North Africans, many of them Tunisians, are thought to have braved the journey since the revolution, according to a 2013 report published by the Tunisian Forum for Economic and Social Rights (FTDES), a local NGO.

About 1,000 Tunisians  have perished en route, but that won’t stop others from trying, says Massoud Romdhani, a FTDES founding member.

“As long as misery exists and, unemployment exists, people are going to migrate,” says Romdhani.

For those who remain, there is a deep sense of disillusionment. Wael Karrafi was 19-years-old when he went into the streets of the under-developed interior town of Kasserine to demand “employment, freedom and national dignity” during the revolution. Police officers used live ammunition on the crowds, and on January 10, 2011, Karrafi sustained injuries to his leg. A few days later, it had to be amputated. But Karrafi was one of the lucky ones. Some of his neighbors and friends were killed in the lead up to Ben Ali’s fall and the families are still seeking justice.

“Half the things we’ve asked for, this government hasn’t even tried to accomplish,” says Karrafi, whose frustration has not subsided in the last three years. “I will not vote for these people. I will not give [any candidate] my vote. They can come to Kasserine from Tunis by foot and say I will do this and this and that for you and I will not vote for [anyone]… people give you promises that they do not keep.”

For all of the unfulfilled hopes and demands of the uprising, most Tunisians agree that there are slivers of hope and at least one thing, the protection of freedom of speech, has been secured. As a result, some young people have been able to make their voices heard in the country’s political arena for the first time.

Some, like Thamer, who is now one of Tunisia’s youngest MPs, became politicians. Others have cast their lot with an increasingly vocal and influential civil society.

The ex-regime used to boast that there were about 8,000 active NGOs in Tunisia but many of these were tied to the old ruling party. Since 2011, many new civil society groups have emerged with the freedom to push for human rights, transparency, legal and police reform, and greater democracy.

“It’s new and not common, that ‘old’ politicians engage with young activists in Tunisia,” said Selim Kharrat, former director of Al Bawsala, an NGO that pushes for transparency amongst elected officials. At 32, Kharrat was the oldest member of a team where the average employee age was 26 or 27, he said.

“Al Bawsala is not the only one,” he added. “Politicians listen to other NGOs driven by young [people].”

This newly created political space has encouraged university and high school students to engage in public debate and seriously grapple with political and social issues for the first time, spurring hope of further changes to come.

Mbarek says she has learned a lot from having to argue for positions that she disagrees with, such as this recent motion: “This house believes that a strong dictatorship is better than a weak democracy.”

“We need to find a good atmosphere to discuss issues without being provoked or having to use violence,” she says.

But while many continue to thank Tunisia’s youth for the revolution and its subsequent developments, the struggle of young Tunisians to make their voices heard, without worrying about violence or being ignored, will take time. In the Tunisian Assembly - another newly freed political space - Thamer says he regularly encounters challenges from fellow assembly members because of his age. It may take a decade or more for the dynamics to change, he explains.

“It’s a mentality,” he says. “We will change the mentality.” Until they do, the struggle for freedom, dignity and employment will continue.