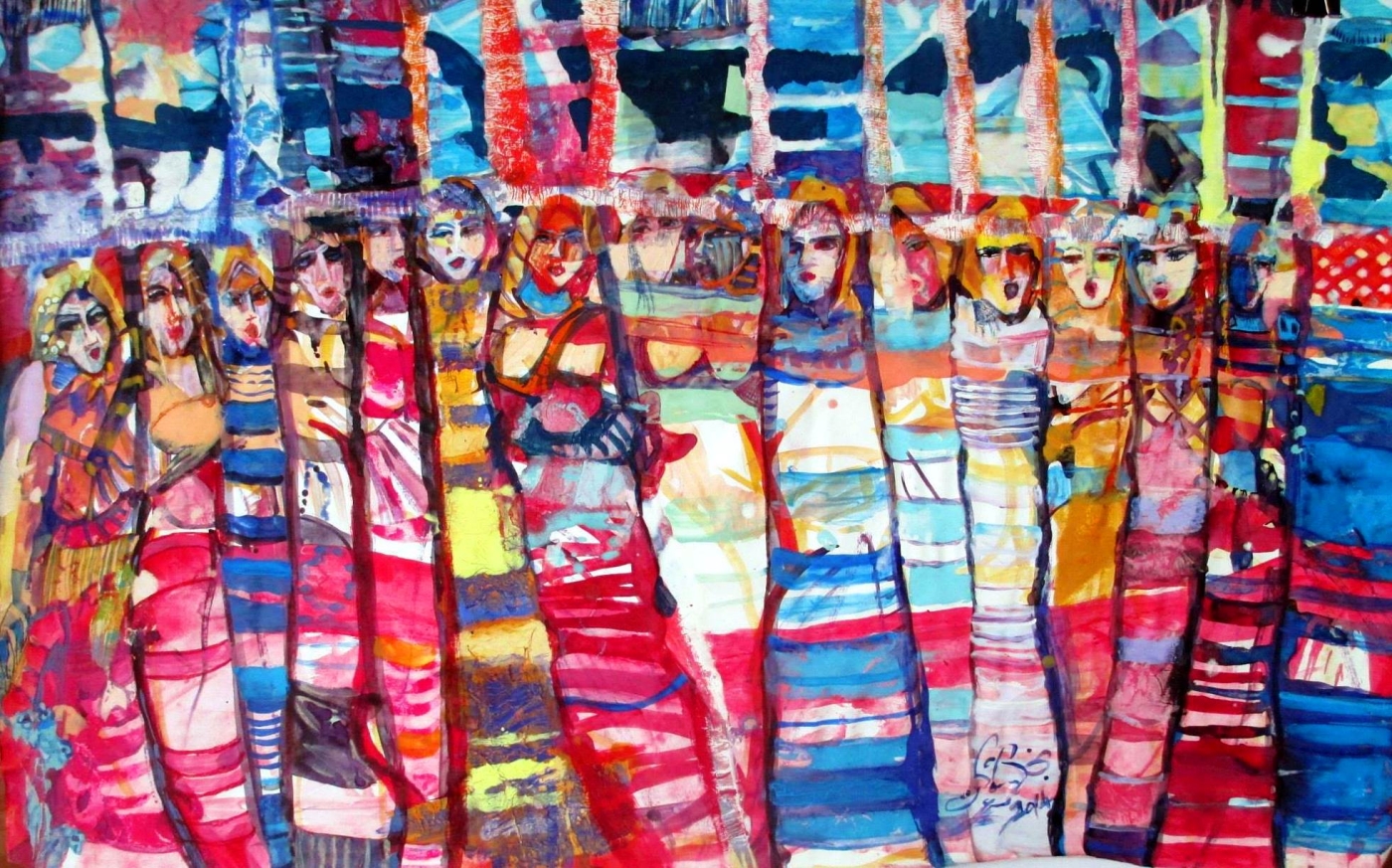 As the destruction of ancient cultural landmarks continues apace across the Middle East at the hands of the Islamic State (IS) group - most recently including the IS militants’ siege of the historic Syrian city of Palmyra - cities like Baghdad and Aleppo that were once the region’s pillars of ancient civilisation today lie in ruins.

Libya’s 2011 uprising and the subsequent civil conflict have likewise taken their toll on its two main cities. The eastern city of Benghazi – once attributed as the birthplace of the 2011 revolution - has disintegrated into rubble, while in the west, the capital Tripoli struggles with the erosion of its traditions and faces the continuation of political assassinations under the control of Islamist militants.

Libya’s harsh and heavy reality is the inspiration behind "Melting Pots," an exhibition of Libyan art held at the Arab British Centre in London this July. The collection of paintings, calligraphy, fabric installations and photographs pay tribute to the two cities’ pasts, showcasing their current disintegration and the reasons behind their downfall.

Using stones to speak about corruption

While modest in space and the number of pieces of art showcased, the exhibition features several powerful items, most notably those by female artists such as Hadia Gana and her ceramic stones.

Placed in a circle on the floor at the centre of the room, the stones display texts, architectural drawings, and fragments of tiles and faded photographs on their smooth surfaces. The artist encourages viewers to pick up the stones, hold them in their hands and look at them; several carry a marble at their core, emanating different hollow sounds.

"People don’t really play with stones," Gana explained. "But you should; they can tell you a lot of stories."

It’s a curious installation, but her fascinating backstory puts the stones in a whole different context. As the daughter of a consultant charged with preserving Libya’s ancient sites, Gana said her father worked valiantly against decades of state negligence and corruption, which she blames for ruining the country’s cultural heritage.

His writings and drawings are featured in her ceramics as a subtle and subversive attack on the destruction of Libyan heritage sites, first at the hands of government agencies during Gaddafi’s time, and today at the hands of militants. A few drops of blood on a stone represent political assassinations taking place in Tripoli today, where bodies are removed and sites are cleaned immediately save for a drop of blood.

Nostalgic images of Libya’s colourful past

Another dominant female artist is Najla Shawket Fitori, whose large portraits of Benghazi and Tripoli as melancholic women hang on opposite ends of the room. Tripoli, once known to Libyans as the bride of the Mediterranean, sits melancholically in a boat draped in her flowered ferasha, a finely embroidered traditional Libyan dress that Al Ageli says is slowly being replaced by the Gulf-imported custom of the black abaya dress. On the other side, Benghazi lies as if on her death bed, covered in a colourful, patterned garb representing the city’s complex tribal identity.

Fitouri’s paintings are heavily nostalgic for an older, more traditional Libya, a sentiment that is reflected in the black and white photographs of Adam Styp-Rekowski, the only non-Libyan featured in "Melting Pots". His street photos capture what remains of the older, more cosmopolitan Tripoli in its Italian archways, traditional clothing, children at play and a smiling fishmonger, with the occasional burst of colour superimposed.

When asked why his images focused on the old instead of contemporary Tripoli, Styp-Rekowski explained that his aim was to capture and archive a fading side to the city.

"These places are being forgotten," he said. "So I wanted to try to get to the places before they’re destroyed; [Libyan] people are forgetting what they have as a history."

Gana explained why she isn’t nostalgic for older times such as when Libya was a kingdom or colonised by Italy.

"I won’t say the city was beautiful before," she said. "But you can still see traces of beauty in it. It could be so much better as a city and this idea makes me nostalgic."

While the exhibition runs heavy on reminiscence, there is a jarring lack of contemporary visuals to counter the images of rubble and nostalgia, a fact that curator and visitor Anna Canby Monk finds problematic.

"The visions we are seeing here are all largely related to religion and culture in the more abstract sense, and in a timeless quality that is similar to old orientalist images," she said. "But we don’t see lived life [in Tripoli], with the exception of a few photos of people going about their daily lives."

Interestingly, the artwork by male artists pale in comparison to that of the women in "Melting Pots", both in dimension and power, such as Nawal Gebreel’s intricately pleated fabric installations.

Muftah Abu Dagaga’s calligraphy designs and Hassan Dhaimish’s cartoon drawings of old Tripoli are aesthetically pleasing, but fail to generate debate or curiosity as much as their female counterparts' work.

And while Ibrahim Tawati’s black and white photos of Benghazi’s rubble provide a striking contrast to Fitori’s colourful paintings, they fail to stand out especially given their similarity in size and colour to Styp-Rekowski’s work.

Al Ageli believes women dominate Libyan art – as well as this exhibition – because they have more to prove than men.

"Libyan women want to prove that they’re better [than men] and that they can do it," she said. "When they paint, it’s their way of living, of saying ‘I am here.'"

Daniel Lowe, curator of Arabic collections at the British Library, hopes the exhibition will reverse misconceptions about Libyan culture.

"Libya is often conceived of in the Western imagination as a cultural desert dominated by authoritarianism, tribalism and violence," he said. "But these stereotypes belie a rich tapestry of languages, cultures and histories, which I hope this exhibition will highlight."

The exhibition is also a means to preserve memories of Libya in the face of uncertainty.

"I’m thinking of the future," Al Ageli said. "If the country gets divided, this exhibition will archive this moment in time through the artist’s eyes."

"Melting Pots" was organised by Noon Arts and held at the Arab British Centre in Gough Square, London, from 14-23 July. For more information, please visit www.noon-arts.co.uk. 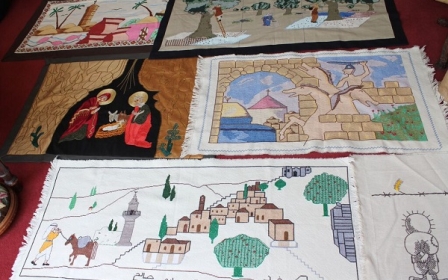 Palestine state
The History Tapestry Project: Narrating the story of Palestine through art 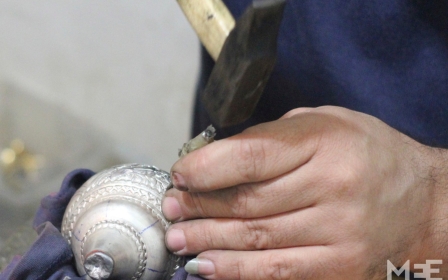 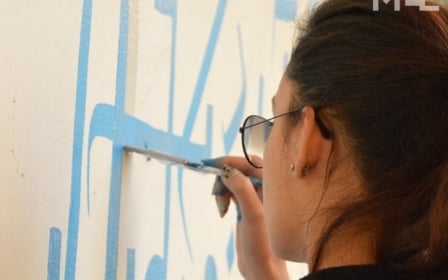